Awards pile up for the Osgoode Carleton Snowmobile Trail Club

The honors, which come on behalf of a very dedicated volunteer base, resulted in earning recognition for its hard-working membership whose efforts have resulted in winning new grooming equipment to better continue trail-grooming programs. 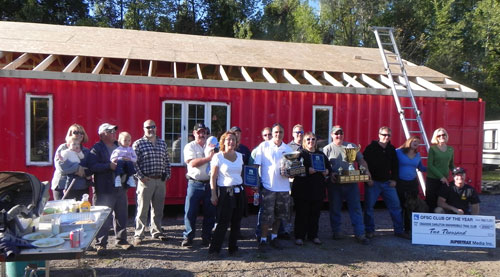 “This all started at the club level and then went onto the District level”, said club president George Darouze in a recent interview with Snowmobile.com. 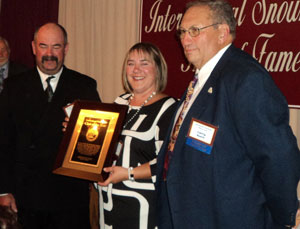 The District nominated this club and submitted the club’s 34-page document for the Ontario level presentation (OFSC), which the Osgoode Carleton Snowmobile Trail Club won. The document outlined all the different projects the club has accomplished and was still working on. The same presentation went on to the Canadian level. And this club, which serves the Ottawa area, won again.

With the support and a nomination by the Canadian Council of Snowmobile Organizations (CCSO), this group went on to be named the best club in the snow world by the International Snowmobile Hall of Fame, based in Eagle River, Wisconsin.

Unable to attend the ISHOF award ceremony, Darouze commented that the delegation representing the club “…were all treated like royalty.” 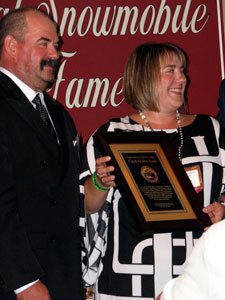 Leigh Stacey, right, and Martin Michels represented the Osgoode Carleton Snowmobile Trail Club in accepting the award as ISHOF International Snowmobile Club of the Year in Eagle River, Wis. this past September.

Speaking of the nomination process, Darouze noted, “The lengthy 34 page presentation was cut down to 14 pages, and it was just too long.” But even the shorter version won them the highest honors. “It’s been just overwhelming,” he said. “The hall of fame’s membership largely comes from North America, so the award is considered the best on the continent.”

Darouze said the Osgoode Carleton Snowmobile Trail Club is the first Canadian club to win the award, and attributes the honor to the club’s commitment to the community. “We’re building a culture in the club. It’s our socializing, our volunteering, our involvement in the community,” he explained.

The OCSTC is 28 years old, has175 landowners, grooms 235 kilometers of trail and has 700 members. But what makes this club different are its executives and its force of volunteers. With 14 executives and over 150 active volunteers, this club makes things happen. Darouze has a philosophy about volunteers and the “… using the 3Rs of Recruit, Retain and Reward!”

“For example,” he points out. “We will have 50 volunteers show up for this weekend to do trail work.” Adding, “We take our snowmobiling very seriously and we operate our club like a business. The club executive feels the same as I do and we also work very hard with all levels of government.” 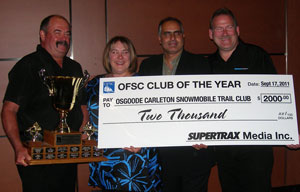 It was a good year for the Osgoode Carleton Snowmobile Trail Club, which also earned the OFSC Club of the Year award.

Darouze is modest, but one can tell he is very proud when he talks about the club’s “new beautiful clubhouse” and “winning” the right to use the Osgoode Multiuse Recreational Pathway after a long battle with residents and the city. This battle was over closing the trail to motorized vehicles, but Darouze firmly held his ground, “Snowmobilers live here and we are tax payers too, we are trail stewards and are a great asset for the Multi-Use Trail.”

After the lengthy battle the town ruled in favor of keeping the trail open to snowmobilers. All of this contributed to the group’s awards and after talking with the club’s president it is easy to understand why this club is the best snowmobile club on so many levels.

Darouze likes to think out of the box to keep people happy and keep things growing. The Osgoode Carleton Snowmobile Trail Club prides itself with its trail grooming, signage, and members always keeping the clubhouse warm. They want to make sure that every snowmobiler has a great experience when they travel on the OCSTC trails. So if you are looking for a sled trip in Eastern Ontario, very close to Ottawa, you should consider checking out what this club considers to be the best trails anywhere.

Osgoode Carleton Snowmobile Trail Club executives stop on a ride of local trails. Dennis Burns, president of the Canadian Council of Snowmobile Organizations, is second from the right.

This club is very in tune with what’s happening in the community. Darouze’s next objective for the club is to get local youth more involved. Presently he is meeting with governments to arrange working with the local schools. With the current unrest with the Ontario teachers, he has offered his club to help the schools with whatever they need after hours. There are arrangements for high school students, so they can get a 40-hour volunteer credit, which is required for graduation in Ontario. This club takes community involvement seriously and is in the public eye on every occasion.

When it comes to winning such awards, Darouze appreciates that it is a combined membership effort and wants to make sure that everyone is thanked. He wanted to thank the International Snowmobile Hall of Fame, OFSC, CCSO, OFSC District #1 Governor and John Boals. He wanted to extend his thanks locally to the landowners, volunteers and business partners.

Darouze explains, “You can never say thank you enough!”

For more information on the OCSTC, visit the club’s website.

Related Reading Lack of Snow Got You Down? Ontario is the Answer – Video Rainbow Country Snowmobile Adventure – Video