What’s Up in the Sport Today?

There are signs that snowmobiling is ready to rebound - or are there?

Going by the Old Farmer’s Almanac — and who doesn’t these days? — it would seem that snowmobiling has nothing but good times ahead. Hey, this past weekend here at the Midwestern Bureau we got smacked with a two-day power outage — now we know what being Amish is like — and about a foot’s worth of wet, heavy slushy snow. Hardware stores and those big box outlets reported runs on snow blowers and snow shovels. The weathercasters stated the obvious, “Winter is here.”

That should be great news for us snowmobilers, though we know that some of the clubs had yet to complete marking and cleaning up their trails before the storm hit. Of course, we’ve chatted with some club folks who maintain the trails in Minnesota and they are concerned that state budget cuts may impact funding for trail grooming. But, hey that’s always a concern. We have snow and that means snowmobiling trails will open up soon, regardless.

If you are the type who watches the stock market and keeps tabs on the local snowmobile manufacturers, like Polaris and Arctic Cat, you’ll have noticed that both companies have done rather well of late. Well, Polaris for certain. 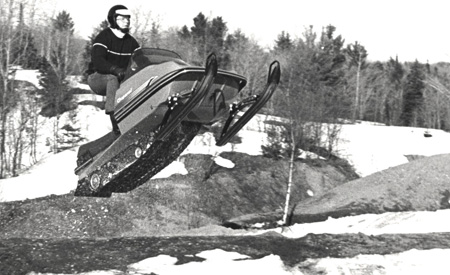 Sleds like this Chaparral brought the sport liquid-cooled engines in the 1970s.

Polaris’ Chief Executive Officer Scott Wine said: “We are pleased with the execution of the Polaris team and our Company’s performance during the third quarter. While the economy and overall consumer demand remains weak, our growth continues to be fueled by innovative new products and our strong dealer network. It is rewarding to see our hard work pay off and be able to report 33 percent sales growth and record earnings per share for the quarter. The momentum we experienced during the first half of 2010 accelerated during the third quarter, as we saw continued market share gains, retail sales growth and margin expansion.” 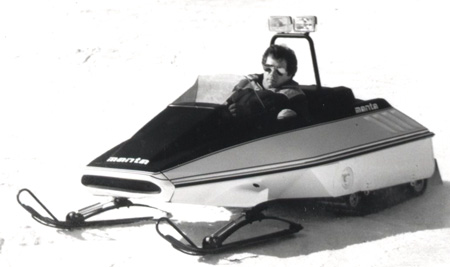 Rear-engined sit-in concepts like the Manta have been tried — and failed.

That’s truly excellent and we must give Polaris credit. After all, in an economy where the competition has been a bit reluctant to come with serious new product, Polaris has innovated and gained marketshare. Look at the side-by-side UTV market. Polaris has the largest market percentage and the fact that the company came with new products like the Ranger 500 show that consumers are ready to buy if they see value and need.

Polaris is on a roll with its defense segment as well, having signed a 5-year contract to provide ultra-light utility vehicles to the Army National Guard. This is very positive. And let’s not forget that there is a US Government need for Polaris’ electric-powered vehicles as well. This all points out that Polaris is very well run and nicely diversified as a “powersports” manufacturer. 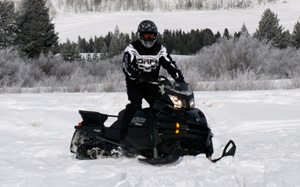 What do we want our sleds to be? Ski-Doo’s Tundra Extreme is one idea.

Okay, a bit off, but not a big deal. We looked over to the comparison of the first nine months of 2010 versus 2009 and we see that Polaris’ off-road sales, which include ATVs and UTVs (side by sides), managed a 33 percent gain year-to-year. Wow, Victory motorcycles were up 81 percent! But, oops, sled sales, which were down six percent for the third-quarter, were listed as off by 13 percent in the nine months comparison. Fortunately, Polaris is diversified. But we are snowmobilers and as such can’t get too excited when we see that action.

Just as the company put a big push on new products for its side-by-sides, so to did the company put a major push in sleds. The Rush, new last season, has spawned a larger family for this season, including using its “Rush-look” to attack the deep snow market with totally refreshed sleds that deserve to be segment leaders.

But, off by 13 percent? As a snowmobiler what does that say? We don’t care? 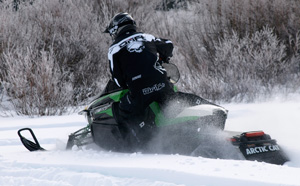 Okay, so we look at Arctic Cat. Well, sled sales grew by seven percent as ATV sales were up 9 percent as stated in the company’s most recent quarterly report. Well, that’s good. Especially good for Arctic Cat as stock analysts liked what they saw in the numbers.

Are we paranoid? Yes and no. We know from talking with dealers that times are tough. Dealers suggest that there is some coming back among their customers, but they also state that consumers are nervous and if they have money they want to hold on to it for now.

As for BRP, Ski-Doo’s parent, information is a little more closely held, but Bain Capital is doing quite well. Yamaha? Break out the international segments and you’ll get a clue. 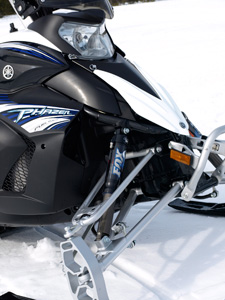 Do we want light in weight sleds laden with modern suspensions like the Yamaha Phazer?

So, if we were king of the business? Our views haven’t changed all that much over the years. Some snowmobilers — especially those in the areas where riding lasts, at best, for three to four months only — have suggested that prices are too high for them. Those who live in the deep powder states where snow comes early and stays late, way late like into May, that they are ready. Of course, some of those folks have learned to be patient and wait until the year following a new sled introduction when they can get a brand new “carryover” at a substantial cost reduction.

Even those old standbys like the pre-season sale don’t work like they used to. Though we hear that a few models did quite well. Of course, the pre-season sales gimmick has been abused. It used to be that you got the “best” price ever on the early bird sign-up, but consumers got mad when they found that the great deal they got early wasn’t as good as the emergency sale that came during the season when sleds were overstocked at dealerships. Do the manufacturers really not see their point of view? Consumers are leery of those deals.

Okay, so that needs to be revisited. 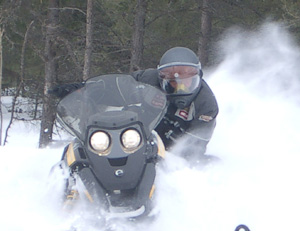 Ski-Doo had the answer with the Freestyle, but too few bought the concept.

Now we hear rumors of three-quarter sized sleds with lowered pricing. We’ve been advocates of that right along, but now we have started to reconsider that reality. After all, there have been downsized sleds being built and while there has been some interest, we haven’t seen a huge run to that idea. Not yet, anyway. Maybe there will be a push for a lower-priced downsized sled. Yamaha’s SnoScoot didn’t make it and Yamaha put a lot of effort into that product. Ski-Doo’s Freestyle snowmobile was interesting but never caught on enough to grow a huge following.

The problem is that snowmobilers want what they consider to be snowmobiles. They are big, powerful and comfortable. Something new had better be extremely innovative and not more “me-too.”

As for right now, we are sitting on the sidelines, watching with great interest. In the meantime, we are seriously looking at rebuilding our 1969 Ski-Doo Olympique 320SS and banging it around the trails later this winter. It’s cheap fun and tunes us in to what got us hooked on the sport in the first place — noise, smell, bad suspension and breakdowns!?!