So, buddy, you got a spare $250,000 on ya? If you want a top of the line snow grooming setup you better. Well, you might squeeze by for about half that if you buy a used groomer and drag.

As a weekend trail warrior we bet you don’t seriously think about how much it costs to keep your favorite snowmobile trail in tiptop shape for riding. Consider that some clubs keep two or more snowmobile groomer rigs in running condition to keep their trails open for you. That’s upwards of a half million dollars that they are spending on your behalf. But, you say, the states and provinces reimburse the clubs and so that cost is minimal.

Snowmobile clubs might disagree. In principal they do get support. However, in Minnesota, which enjoys 22,000 miles of groomed snowmobile trails, the maintenance of 90 percent of those miles is the responsibility of snowmobile club volunteers. Aside for coughing up the money to purchase and maintain snow groomers, club people do quite a bit more. In addition to an outlay of hundreds of thousands of dollars for the groomer equipment, the clubs provide the very infrastructure for those 22,000 groomed miles. They map, design construct, mark and frequently beg for access from landowners. To get the trails in shape for the winter, club members use their own chainsaws, shovels, axes and other tools to perform basic trail maintenance. 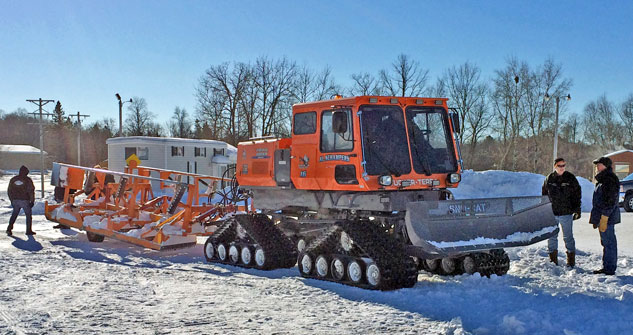 But the state of Minnesota helps out, right? The Minnesota Department of Natural Resources (DNR) constructs, grooms and maintains 2,000 miles of the statewide system. Guess who accepts responsibility for the remaining 20,000 miles?

In the case of Minnesota, the state does contribute grants as a reimbursement mechanism. Of course, the grants have limitations and are predicated on the clubs’ location in the state, the average snowfall and length of season. That will not cover total reimbursement to the clubs, which hold fundraisers, seek donations, rely on charitable gambling sources such as pull-tabs, and club memberships. Other statewide funding comes from snowmobile registrations, trail pass fees and the one-percent of unrefunded gas tax that is an approximation of the taxes paid by snowmobilers for the fuel used in their sleds. Don’t get overly warm and fuzzy about the state’s contributions to the clubs as those monies – nearly US$6 million of the state’s US$14.2 million snowmobile trail funding – go back to the state to defray DNR trails, enforcement and DNR administration. 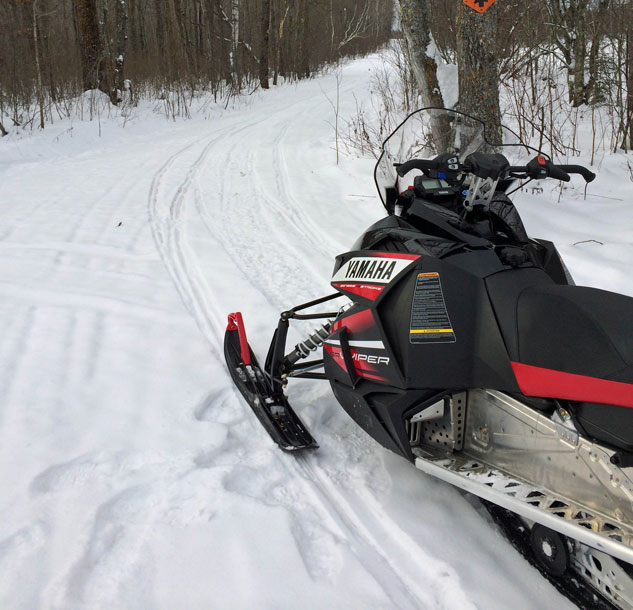 The grooming of Minnesota’s 22,000 miles of snowmobile trails accounts for more than US$200 million in winter tourism.

The remaining $8 million in trail funds gets to the clubs to operate 20,000 miles of trails, which provide an the impetus for Minnesota’s winter tourism dollars. According to an economic impact study on the value of snowmobiling to the state, more than $200 million is returned via tourism. The “snowmobile effect” accounts for $245 million in wages and salaries from about 8,000 jobs related to the sport’s activities. That doesn’t take into account the gross state product that includes state and local tax revenues, which can arguably be placed at more than one billion dollars! This all makes snowmobiling quite important to Minnesota and should demand that adequate funding for trails is vital.

Snowmobile trails are important. But they cost money to maintain – and personnel in the form of volunteers. As one trail grooming snowmobile club member told us recently, “We groom the trails as a labor of love.” He’s in his late 60s. When asked how many thirty-something club members his club had to groom trails, he paused slightly before admitting, “Zero.” This is important, because if all the trail groomer members of a club decided that they’d rather spend their winters hanging out poolside at a warm weather destination resort, who’d take care of the trails? Simply put: No clubs, no trails, no sales! Not to worry, there’s probably a snowmobiling app that replicates riding your sled. The trails on a PlayStation or Xbox are always groomed.

Real trails require real effort. At a groomer display in central Minnesota, we learned just how serious trail maintenance technology could be. Even if you want to go “cheap,” you can’t. Starting with a powerful “field” tractor with a heated, enclosed cab is an option. But to haul a modern trail drag, you’ll want to fit a track system to that tractor, bringing the price up to US$200,000 or more. Snow machines designed to groom trails or ski slopes will cost as much. The snow groomer drags will add up as well. A quarter-million dollar investment is the norm.

The Minnesota groomer showcase gave club and association members a real-world hands-on experience with various pieces of equipment, including the TrailBully representing more than four decades of snow grooming technology from Germany’s Kassbohrer. The company produced its first PistenBully groomer in 1969 with basic elements that continue in its latest models. As the largest producer of German motor coaches and truck trailers, the company’s engineers equipped the first groomers with hydrostatic drive, a low center of gravity to enhance safety on severe ski slope inclines and the strong torque of a diesel engine. 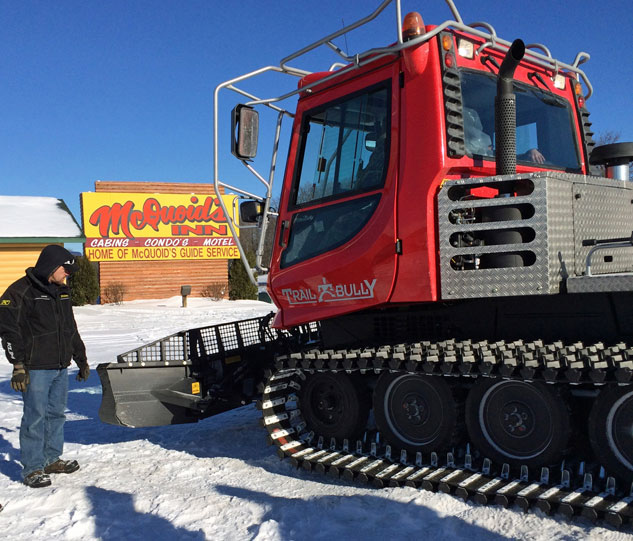 Utilizing 45 years of snow grooming experience, the Kassebohrer TrailBully is designed to be economical to operate, dependable and provide many years of service.

Move forward 45 years to the PistenBully TrailBully and you’ll note that this piece of equipment was engineered for one purpose, snowmobile trail grooming. According to Kassbohrer the TrailBully has been equipped with a drivetrain to pull big drags, but be fuel thrifty in its operation. The suspension features five axles and a performance X Track for traction in icy conditions.

The TrailBully design recognizes that snowmobile clubs must carefully consider all the merits of their snow grooming equipment. Since funding is a scarce resource, the trail groomer has to be economical to operate, dependable and provide many years of service. 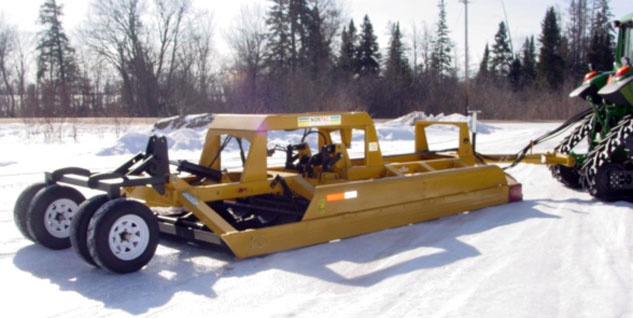 Nortec of Antigo, WI, has developed a groomer that “processes” the snow to form a strong, smooth base layer. (Photo courtesy of Nortec)

Whether the pulling unit is a tractor or a TrailBully, the actual grooming device also shares the merits of economy, dependability and longevity on the trails. A piece of trail grooming equipment that breaks down serves no useful purpose to the snowmobiler, that’s why the manufacturers at the grooming showcase highlighted drags that could be customized to a club’s local grooming needs.

Arrowhead Groomers have been keeping high volume sled trails in shape since 1976. Based in St. Germain, WI, the Arrowhead line of groomers manufactured by Walker Equipment includes designs for high volume and even a series of “mini” groomers that can be pulled by an ATV or side-by-side UTV. 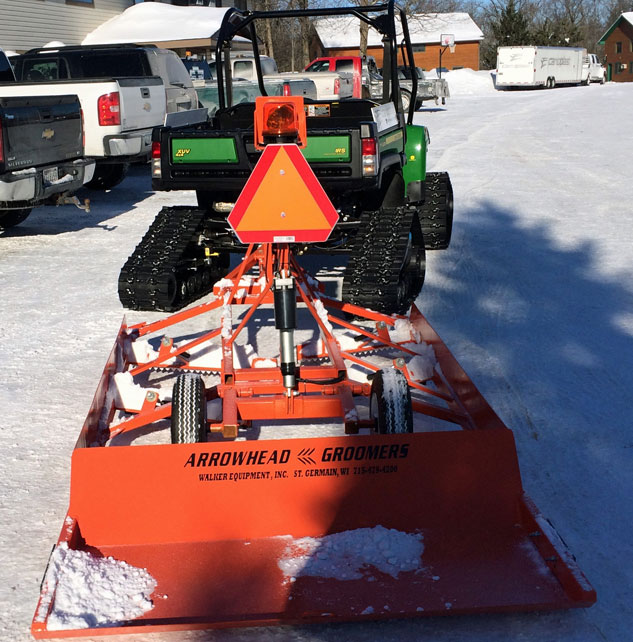 A manufacturer of trail groomers since 1976, Arrowhead Groomers makes larger units as well as this “mini” design that can be pulled by an ATV or side-by-side like John Deere’s XUV.

While most groomers cut moguls and pack snow, Nortec’s new Snow Processor is said to process the snow as it lays down a smooth path for riding. Based in Antigo, WI, Nortec’s Snowmobile Trail Groomer/Snow Processor processes the snow by milling the surface, cutting the humps, bumps and moguls. Collecting and processing the milled snow along with new snow is claimed to change the snow molecules, which can be used to build a smooth snow base.

During the two-days of the Minnesota event, the various grooming equipment suppliers enjoyed ample interest from snowmobilers around the region. The hands-on time with the equipment and expert knowledge of the manufacturers allowed interested club members the opportunity to assess potential solutions to their snowmobile trail needs. We didn’t see any clubs writing checks and driving away with a new groomer. After all, the financial burden of laying out a quarter-million dollars needs to be studied and decisions weighed. Hopefully, those trail grooming club volunteers aren’t heading off for warmer climes. But if they did, where would you ride?