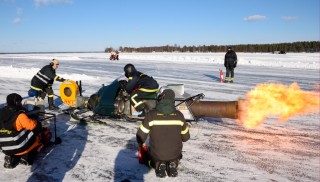 For many of us, snowmobiles are a source of creativity, art, and speed.  Swedish bothers Linus Nilsson and his Jim took their creativity and need for speed to another level with this Jet Sled, built specifically for an event that mirrors Bonneville, but on snow!  This start-up video is what caught our eye, but read our interview and there are some more video links at the bottom for you.  To follow their Facebook page, click here:  Svarthaletracing

Here is their start-up video!

Why did you build this sled?

This is a long story. Since about 10 years back, they arrange an event each winter inspired by landspeed events like Bonneville Speed Week, but on ice. People can participate with almost anything that moves. It does not even have to be fast. Sometimes crazy is good enough (like the vehicle “The Saw” which consists of a wooden plank as the frame, a ski in the front, and a big circular saw blade as the rear wheel.  There is even a bathtub with a motorcycle engine and snowmobile track.

Me (Linus), my brother (Jim) and our good friend Lars-Erik wanted to build something and thought of using jet propulsion instead of wheels or tracks. There is an old type of jet engine called pulse jet, which is relatively easy to build. They have few to no moving parts and are extremely low efficiency. This means that they make a lot of noise and heat, and generate a little thrust.

The first pulse jet engine we made was not very big and mounted to a kick-sled (i don’t know if you have those in the US/Canada but they are very common in Sweden). With the jet-powered kick-sled we reached close to 50 mph, and soon realized that we needed to build something bigger to go really fast.

What chassis did you start with?

That’s when we came up with the idea to build a “snowmobile” with a huge pulse jet engine. The idea was to use our mother’s old Yamaha ET400 chassis, but as soon as the drawings for the engine were finished we realized that was out of the question.  So we built a new chassis out of tubular steel. Not many parts actually originate from a snowmobile now. The front skis are old Ski-Doo Everest, and the leaf springs work surprisingly well at high speed. We soon realized that it was pure madness to try to go really fast without rear suspension, so we modified the chassis to add one. The rear shock absorbers were donated by the local Polaris Dealer. I believe they are RMK 800.

What are the turbine details?

To be picky, it is no turbine at all. As mentioned above, the pulse jet is an ancient type of simple jet engine which is not used anywhere  any longer. Major drawbacks are terribly low efficiency, insane noise, and bad durability. The most well known use of pulse jets is probably the one that powered the German V1 missiles during the 2nd world war. Our pulse jet has about the same thrust (about 2300 Newtons), but is slightly smaller physically.

We have made the design by ourselves, and since our pulse jet (in contrast to the German missile) has to be durable and easy to maintain, we put a lot of effort in to the design. For example, the reed valve grid in the front contains 180 reed valves made out of stainless spring steel, and the design allows us to disassemble the grid, change all the valves and put it back together in one and a half hour.

It runs on gasoline, and uses about 12 litres (3,17 gallons) / minute which is supplied by 6 fuel injection pumps. It has to be started with a big fan. You can see the big yellow starting fan in the videos. I mentioned the noise earlier. It can easily be heard for 10 miles. It is a deep pulsating sound, at about 50 Hz. Car alarms within a few hundred meters/yards go off when we start it, and they have to secure the computers and timing equipment in the speaker booth with duct tape.

How long did it take to build?

This is an on-going project. I believe it took us about two years to get the engine started. At the first race we barely left the starting line.

What is your fastest speed to date?

One year later (Speed Weekend on Ice is only once per year) we raised the bar a lot and set the goal at reaching the finish line. Then the goal was 200 kmph (124 mph), which was later increased to 250 kmph (155 mph). Our top speed record is now 246 kmph (153 mph) , and i believe the entire project to this point has taken us at least five-six years (i lost track…).

We should mention however that we do not work with this all year.

What have you built before?

Not many vehicles like the pulse jet powered snowmobile. There is the kicksled, which we still run sometimes.

Does Svarthalet Racing race any other sleds?

Well, most people in northern Sweden have at least one snowmobile. Those are nothing out of the ordinary though. We have plans for future builds. One month ago we purchased an old rear motor dragster chassis which we plan to convert to skis and mount the pulse jet on.

By sitting in front of the pulse jet instead of on top of it, we can reduce the front area drastically which will decrease drag a lot. Reaching 300 kmph (186 mph) should probably be possible then.

We have also acquired a couple of Boeing/CAT 553 gas turbines, originally used in the Swedish tank Stridsvagn 103S, but have not yet decided what to do with them.

I have also attached a photo (DSC_2266) showing our pit/tow vehicle. I don’t know if you have ever seen a snowmobile like this. It is called Larven (The Larva / The Caterpillar) and as you can see it has no front skis. They were manufactured in Sweden, and quite rare these days. You steer with skis on your feet, and it takes a lot of skill to drive them well.

It is the perfect vehicle for towing the jet snowmobile to the starting line!

(Our friends Olle and Lasse Andersson who made the brutal Kangoo in the video linked below are actually building a new smowmobile inspired by Larven, powered by an Yamaha SRX 700 engine.).

This is probably one of the best

Worth mentioning however is that this is no longer our fastest run, but the difference is only a few mph.

This one, recorded by a friend, has a cool slo-mo sequence where you can clearly see the pulses coming out the engine

This video is probably way too long for you. It’s kind of a “documentary” from our participation in Speed Weekend on Ice 2016.

This is not a snowmobile, but a project that I have been just a little involved in. You may not have any interest in it at all, but a lot seems to like this car. Some good friends of ours built this Renault Kangoo. I helped out with the electronics for the gearbox

Here are some pictures Linus sent: 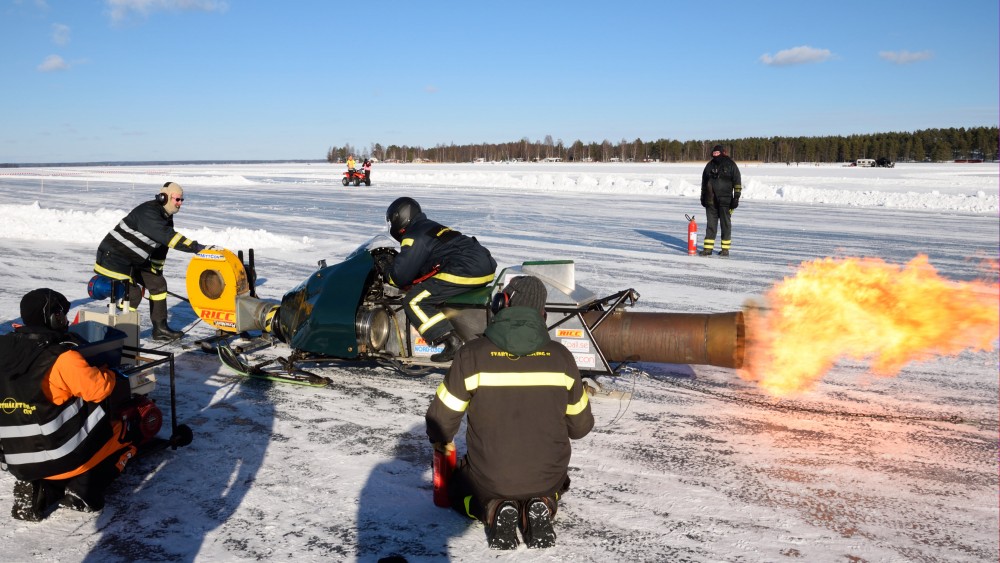