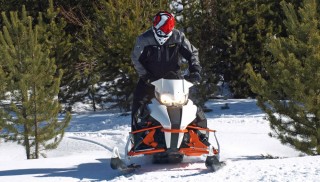 The US Patent Office holds hints to snowmobiling’s future

In a snow world where snowmobile sales have dipped to fewer than 130,000 units sold annually, you might think that the four sled makers would pull back on advanced research and development (R&D) for future models. After all, this past season’s sales were the lowest since 2011 and less than half of what sales were at the end of last century, when more than 260,000 units were sold in 1998. Still, with North American sales seeming to hold at 100,000 annual units between the United States and Canada, the sled manufacturers have kept consumer interest by introducing new concepts like the all-new fourth generation Ski-Doo MXZ 850 with its EPA-friendly second generation E-TEC and, of course, the powerful Yamaha turbo triple for both Yamaha and Arctic Cat models. Obviously there’s still money to be made in the sled business – now and into the future.

A search at the US Patent Office hints at what the future might be in snowmobiling. There’s Arctic Cat’s proposal for a monorail rear suspension that pivots and could underpin a new mountain design. Another manufacturer proposes a design for an articulating seat and a wild concept for ski braking. There are plans for reworked front suspensions with accommodating body work. While snowmobile sales have dipped, imaginative designs and concepts from the various snowmobile companies’ engineering staffs flourish. 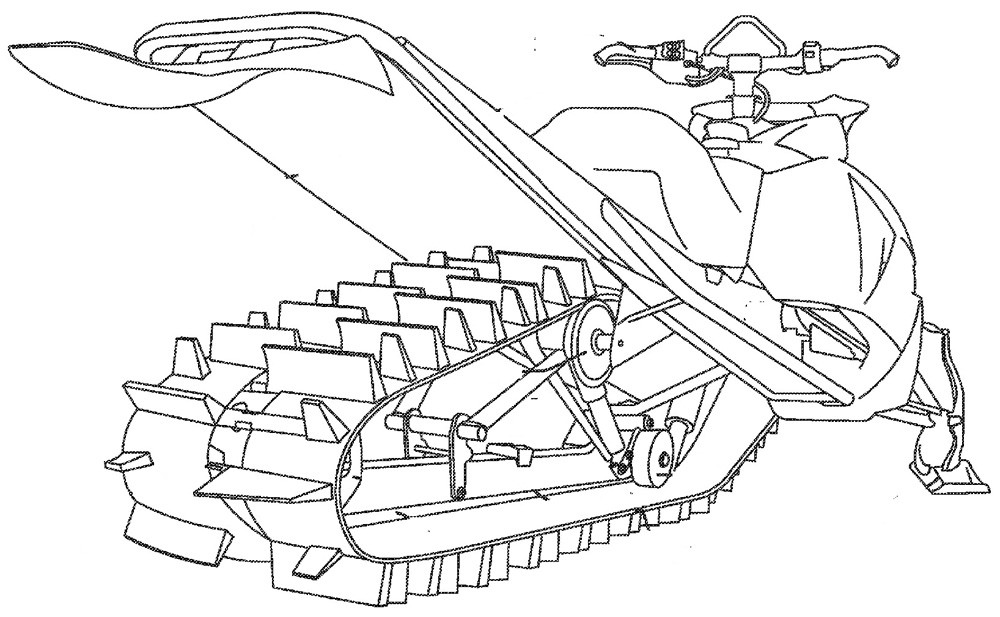 What we know for certain is that Ski-Doo put a great deal of effort into the creation of its Gen-4 REV chassis and newest E-TEC injection system. In somewhat limited release for model year 2017 in MXZ, Renegade and Summit trim, expect wider application of these pieces for model year 2018 and beyond. Let’s not forget the adjust on the fly air suspension used on the Grand Touring and Renegade Enduro, or the trick adjustable dagger Pilot TS ski blades and pivoting tMotion rear mountain suspension. How about that nifty forward adjustable riser bar option that came standard with the MXZ X 850 E-TEC?

Ski-Doo owns the title of Number One selling brand and shows no sign of giving up that hard-earned position as it continues to attack the market with new ideas. Two summers past, Ski-Doo engineering filed a patent for a unique pivoting snowmobile seat. The design calls for a front and rear pivot action that assists the rider in leaning into a turn – or, perhaps, a sidehill. Since a sled or an ATV doesn’t lean like a motorcycle, acceleration through a turn actually throws the rider in an opposite direction, making the rider lean to the inside of the turn to compensate for centrifugal force. While experience allows most riders to react quickly to this situation, BRP/Ski-Doo engineers feel there is a better way to assist riders, keeping them comfortable and in better control of the vehicle.

Ski-Doo already equips its Summits with the tMotion tilt suspension. Will a patented tilting seat add to its mountain versatility?

Ski-Doo’s idea features a system of shock absorbers or dampers that control pivoting of the seat to effect an automatic lean-in posture. The idea is for the rider to better travel around corners or maneuver over a mountainside. This system as envisioned by the BRP/Ski-Doo designers could be applied for use on ATVs, personal watercraft and, perhaps, BRP’s three-wheeled Can-Am Spyders. In addition to the design’s ability to improve consistent rider turn-in, the seat supplies added suspension capabilities. The general idea is to allow the rider to stay centered on the seat and to maintain greater control of the vehicle by retaining a vertical position.

In another patent, BRP engineers arrived at the idea of using the sled engine’s electronic control unit (ECU) to control actuation of an electronic oil pump. In the case of a two-stroke engine, an external oil tank has its oil injected with the fuel based on the operation of a mechanical pump, which may be linked to the throttle lever to get the right balance of oil to fuel depending on engine revs. With a two-stroke the higher the engine output the more lubricant is needed. Ski-Doo engineers recognized that sometimes the engine speed may be high, but actual power output is relatively low by comparison. They also know that there is a benefit to having the engine’s lubrication system controlled more precisely under differing conditions than a linear mechanical pump can manage. Plus, since mechanical pumps are driven by the engine, that power isn’t available to the track. The solution would be a pump that is electronically controlled by the engine’s brain and operates electrically.

Ski-Doo engineering goes wildly out of the box with a design for a front track assembly that provides front brake skis. The idea is to offer controlled braking. Certainly we are not engineering experts, but this would appear as an exercise with a narrow niche for most snowmobilers. The concept replaces traditional skis with ski assemblies that integrate a tracked system with drum braking to facilitate greater straight line stopping power. 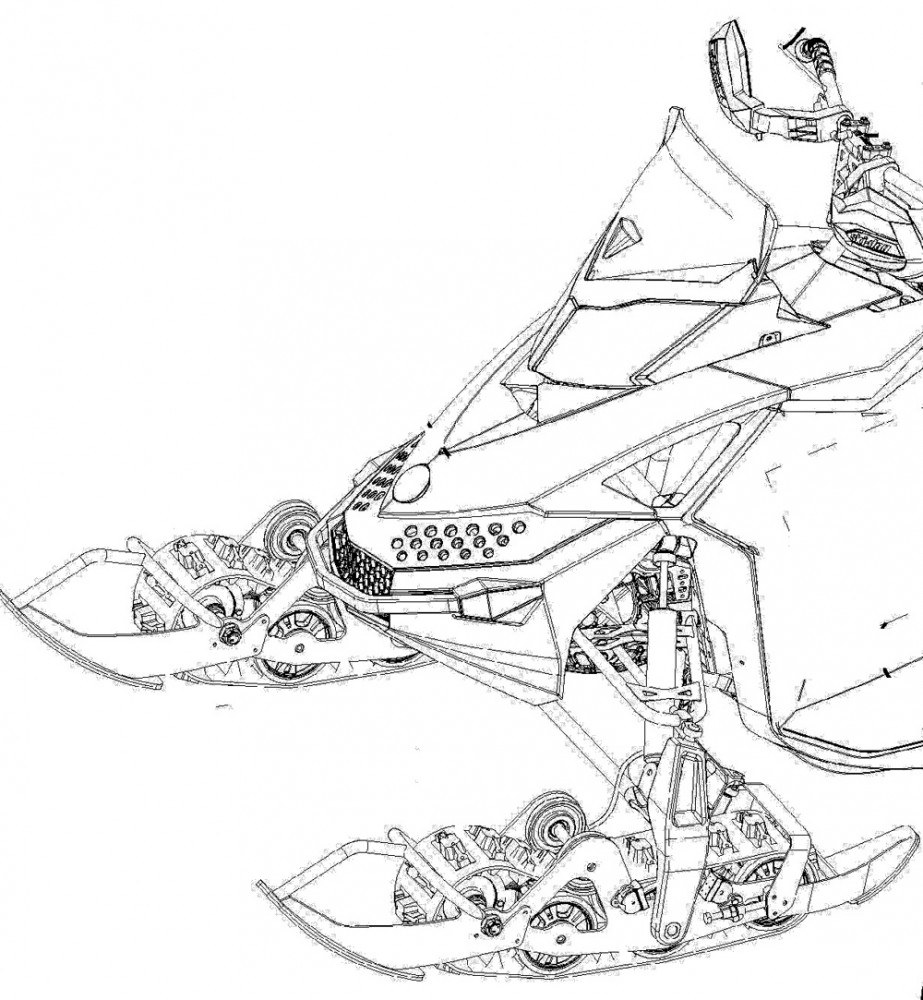 You’ve got to love the creativity of BRP Ski-Doo engineering that came up with this track ski concept for adding sled braking.

The idea of fitting a snowmobile’s skis with some manner of braking device is not new, but the idea of tracked skis is innovative for certain. We would never say “No, it can’t be done,” but we’d ask “Why?”

The design as shown in the patent drawings reminds us of old-time Ski-Doo engineering where complexity and pieces add weight and seem to circumvent one of a snowmobiler’s basic tenets – lightweight and simple. In the past pre-REV days, Ski-Doo engineering earned a reputation for convoluted designs. We remember a very Rube Goldberg-esque reverse gear system that predated the efficiency and simplicity of Rotax Electronic Reverse. We think that Ski-Doo has rebounded to its position as Number 1 by taking into account lightweight simplicity, especially as it’s confronted by the weight-depleting designs of Polaris’ Pro-RMKs. Think QuickDrive for effective simplicity as just one example.

Unique and inventive as this ski braking design may be, we’re not feeling it as viable right now. Perhaps it could serve as a starting point for a sled with all-track drive – rear drive track and front ski tracks fed off a transaxle of some sort. Imagine those full throttle burnouts! 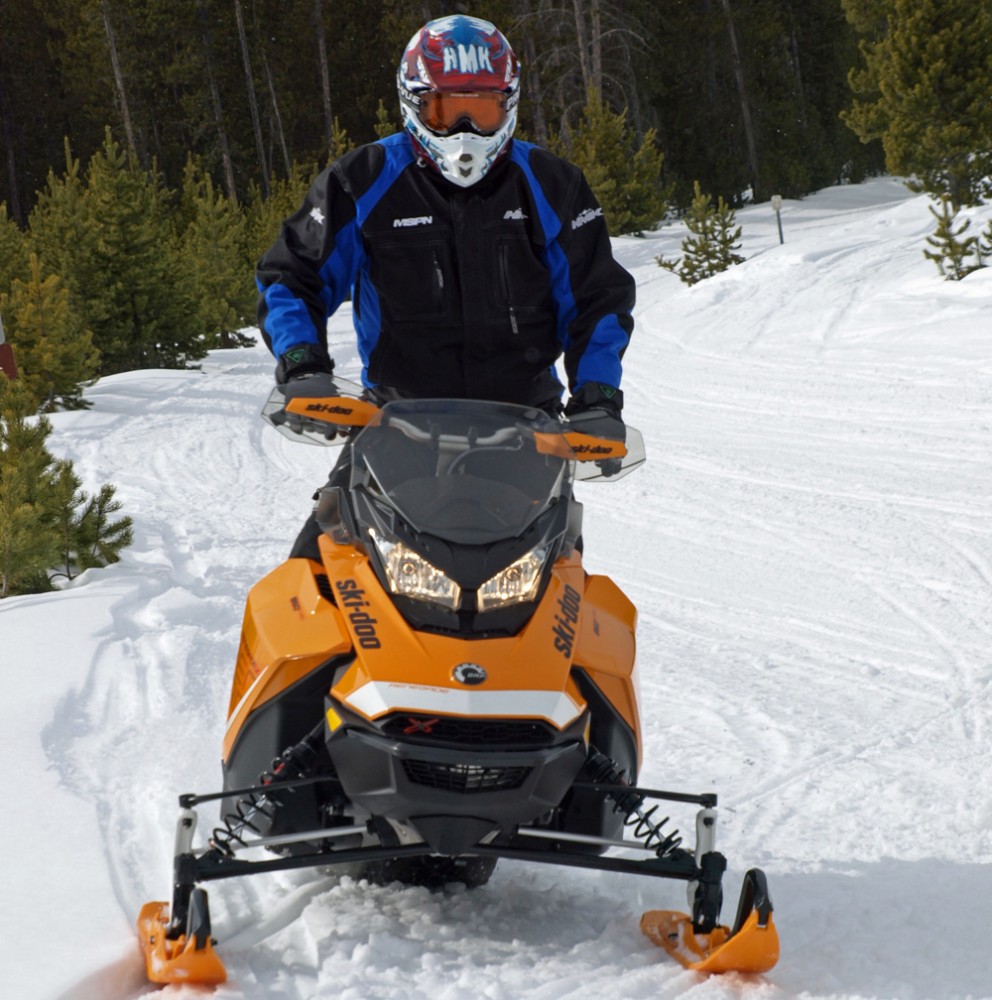 The appearance of the all-new GEN-4 REV 850 from Ski-Doo is testament to the Canadian sled maker’s intention of remaining Number 1 in worldwide sled sales.

Getting sleds lighter and allowing them to achieve high power-to-weight performance should be a goal. That would seem to be the direction one Yamaha patent strives to make. In a patent filed in 2015, Yamaha engineers proposed a lighter weight sled design that appears quite conventional but calls for lightweight materials in its construction.

The design allows for carbon fiber reinforced plastic materials for portions of the engine support area. This bulkhead design would unite the sled tunnel and engine. The carbon fiber reinforced material would be used in the front bumper as well with the ultimate goal to reduce the future sled’s overall weight. Yamaha’s patent filing states: “A more lightweight snowmobile receives a smaller running resistance while running on snow. Therefore, the snowmobile is desired to be reduced in weight.” Yamaha certainly understands this issue as it has battled weight right from the start of its four-stroke engine era, led by the RX-1. 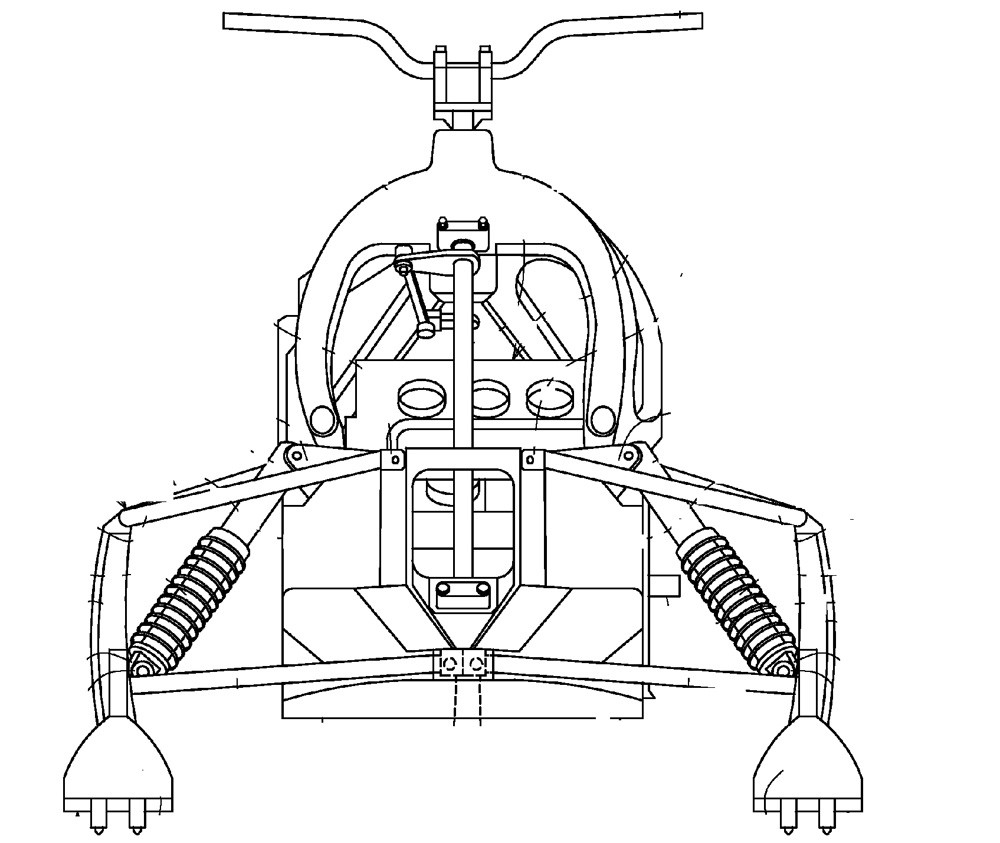 Yamaha recognizes the importance of lightweight design and is pursuing a new design that’s heavy on lightweight but tough carbon fiber reinforced pieces.

The Yamaha concept offers a distinguished walled engine compartment with additional construction that incorporates support for a double A-arm front suspension. This design uses modern carbon fiber reinforcing technologies to create a new and lighter weight Yamaha sled. It should also have a formed pyramidal design to help locate the front shock and upper A-arms.

Overall, the design utilizes lighter weight materials and fewer pieces to help in its goal of being “…reduced in weight.” As a new sled, we could see this design coming with a normally aspirated 100-plus horsepower version of the new 998cc Yamaha four-stroke triple. The diagrams we’ve seen make it look as though this Yamaha could be manufactured by Arctic Cat as a continued collaboration of the Cat-Yamaha partnership.

Whatever we’ve really stumbled across is interesting, but the true realization is that the snowmobile companies continue to develop new concepts for the sport’s future. That’s the best new; that future snowmobiling is patent pending.