Structural bonding has been used in the OEM automotive arena since Lotus introduced it with its Elise model in 1996. The Elise featured an aluminum chassis that was bonded together with adhesives, which are also used extensively in the aerospace industry. In either application they perform a wide range of jobs from mounting auto body panels all the way up to attaching engines to airframes. Adhesives allow builders to produce super-lightweight, super-strong construction. Keen-eyed snowmobilers will note the Polaris Rush Pro-Ride chassis is constructed using structural bonding which makes the Rush, like the Lotus Elise and many airframes all over the world, lightweight and strong.

The inspiration to use adhesives came when a Polaris engineer with past experience in the aerospace industry proposed using them to attach things such as small brackets to the chassis. He felt this could eliminate the drilling of many holes not to mention the time-consuming process for prepping that process. From there the idea blossomed until there was talk of using adhesive to construct the entire chassis.

“I saw bigger potential because at the time I was struggling with chassis construction and putting dissimilar metals together,” said Senior Polaris Design Engineer Rick Kerner. “Overall, structural bonding looked to be a better fit in allowing greater flexibility in chassis construction.” 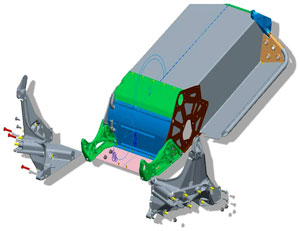 In this photo the clip halves (green) and cooler (also green) are bolted and/or riveted as well as bonded together.

The bonding agent used to construct the Pro-Ride chassis is an acrylic adhesive and — in the OEM automaker world — it is an “off the shelf” product. That said, it’s not something you can go buy at the local hardware store. However, while it is a complex compound it is simple to use. It’s a two-part acrylic adhesive that requires no special conditions to use apart from a “room temperature” environment and adequate ventilation. One hour after application it is at 80 percent strength and the parts are basically ready to ship.

The way the adhesive is formulated, the parts don’t even have to be clean, and a stronger bond is created on parts with a lightly oiled surface as they might come from a fabrication house. Imagine if every part had to be operating room clean and you can see how this saves Polaris time and money at the assembly line. In short, it’s easy to call the adhesive “glue” but that would be a vast oversimplification.

How can an adhesive hold up to minus-30 Fahrenheit temps? Fortunately, to answer this question, Polaris had many parallels that could be drawn between conditions a snowmobile might see and those found in the aerospace industry. At 30,000-35,000 feet the temperature range is -40 to -50 degrees Fahrenheit. These are temperatures as cold as many snowmobiles will ever see. From its use in airframes the adhesive Polaris uses has already been proven to work in the conditions a Pro-Ride chassis may encounter. But, for the record, the “official” working temperature of the adhesive Polaris uses is -40 to 300 degrees Fahrenheit. 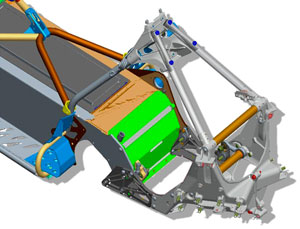 In this photo the copper-colored tubes at the front of the chassis are another example of parts that are bonded together in the PRO-RIDE.

Most people reading this are probably envisioning an assembly line worker with a glorified hot glue gun or caulking gun at this point. However, the adhesive is actually dispensed by state-of-the-art robotic machines that are the same as those used by companies such as BMW and Chrysler. They accurately dispense the correct amount and correct mix of the two-part adhesive down to a couple grams of weight and couple hundredths percent on mixing volumes. Where the adhesive is applied to the chassis is determined by the chassis design and is programmed into the robot’s computer.

The adhesive is not the only thing holding the chassis together. Automakers often use redundancy in the joints where they use adhesive, meaning the joint will use both rivets (for an example) and adhesive. Polaris does this, but they only use rivets for fixturing (basically just fitting the parts together in the correct position) and the adhesive forms the actual bond. An exception is where the tunnel meets the bulkhead, an area that sees considerable flexing and stress over the life of the vehicle. Here, Polaris uses both rivets and adhesive to join the parts.

Bonding will usually trump both riveting and welding every time. When a part is welded it will always end up with a heat-affected zone that is weaker than the rest of the part. In this area the aluminum reverts to its as-extruded state and is about 50-percent weaker than the original material. A bonded joint will be stronger because it will not have this weakness.

“We have a little demonstration where we weld an aluminum tube inside an aluminum lug on one end, and then we bond a lug on the other end,” said Kerner. “We then pull it in our MTS, or Material Testing System, and the welded end tears off every time.” 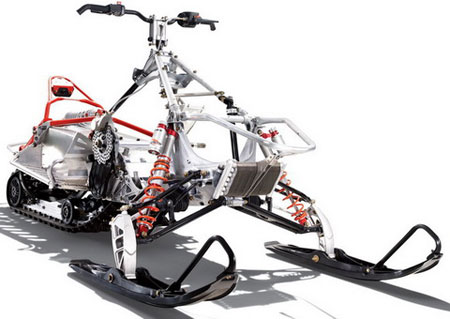 Chassis bonding has given Polaris the ability to construct the most precise, efficient snowmobile chassis possible.

Polaris has also tested the Pro-Ride chassis on a bedplate where the entire chassis can be measured for torsional rigidity and bending. On this rig the Pro-Ride chassis tests as stiff as the IQ race sled. Torsional stiffness is a little bit better than the race chassis and is well over 100 percent stiffer than the current IQ, which translates into a quality you can actually feel when you ride the sled. Much of this is due to the ability adhesives give to place the right strength materials in the right places regardless of whether they can be welded or not (for example, combining steel with aluminum).

In addition to being stronger, adhesives allow the chassis to be constructed more accurately so jackshafts, engines, clutches and driveshafts all line up more precisely.

“When we put these sleds on a CMM or what’s called a FARO arm (basically a portable coordinate measuring machine), things line up way better with the CAD software,” said Kerner. “We can pretty much build what we design in CAD to a degree we’ve never been able to before.” 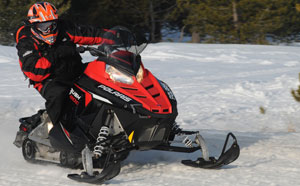 Chassis bonding isn’t just the latest buzz terminology. The quality of the bonded construction in the PRO-RIDE chassis results in a machine with more precise suspension calibration and improved rider feel.

Weight savings come from being able to place the right strength metals in the right areas and the reduced use of rivets and welding. Bonding eliminates between 13-14-feet of welding and 60 percent of the rivets used to construct the IQ chassis. Also, it allowed elimination of 40 percent of the parts used to construct the IQ chassis. Adhesives allowed use of specific thicknesses of parts and highly engineered castings over the complex array of formed and bent aluminum and steel parts found in the IQ. The result is a chassis that is 15-pounds lighter and more economical to produce due to reduced parts, material and fastener counts.

Polaris has conducted years of prototype testing with structural adhesives and they have vehicles that have endured over five years of testing that are still running. These sleds don’t get ridden to poker runs. Prototypes are run through the wringer and see more abuse than 99 percent of all consumer sleds. And Polaris says they’ve made huge advances in the construction and bonding process since those were built.

“I will be purposely vague, but the adhesive will last as long as or longer than the service life of the chassis,” said Kerner. “The upper limit of how long it will last, say compared to mileage on the vehicle, well that’s what we call TBD (to be determined) as we haven’t found the upper age limit yet.”

Snowmobilers can rest assured that, at Polaris, the future of chassis construction will certainly include bonding. 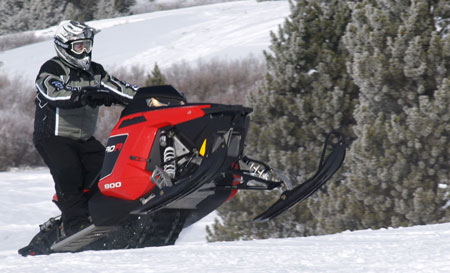 The toughness of the bonding process in a Polaris Rush means you can pound the sled hard over the toughest moguls.