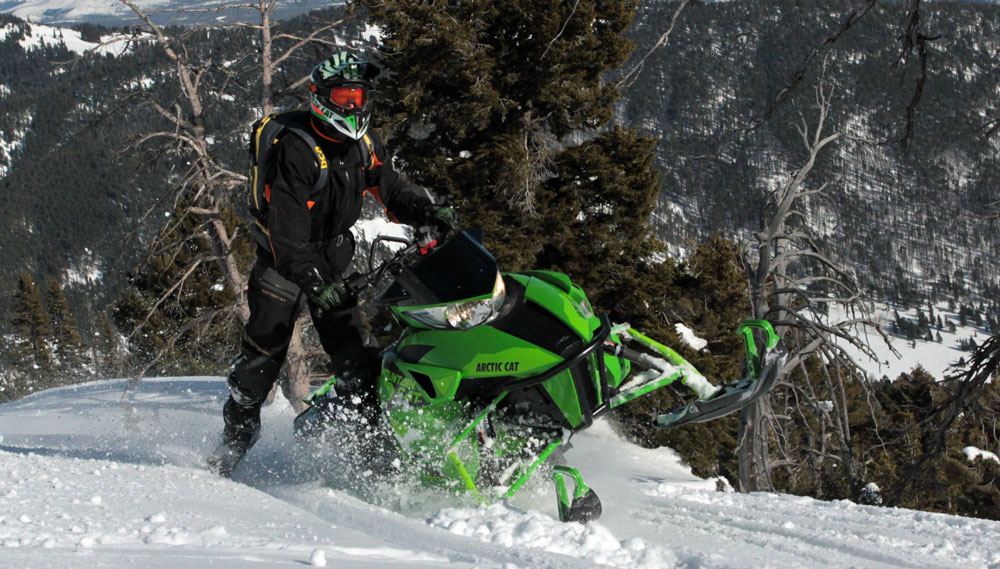 You need to give this Mountain Cat a chance

“When the Mountain Cat’s PowerClaw claws reach out and grab the snow, let it claw.” These were the words spoken to me by my brother and test rider Kevin Allred when I screwed the pooch rounding a large blow hole at the bottom of a mile-high lodge pole pine. The 2017 Mountain Cat, no fault of its own, dropped into the abyss and as I momentarily weakened, before stabbing the throttle, the Mountain Cat became a stuck Cat.

As brother-helped-brother move from “stuck” to “unstuck,” he said those words.

The 2017 Arctic Cat Mountain (MC), part of Arctic Cat’s M8000 line, (which from this point forward we’ll refer to as MC 8000) is Arctic Cat’s premier mountain snowmobile, the crème da la crème. It sits ahead of the M8000 Limited as the king Cat.

Here is a quick up front opinion on the MC 8000. Arctic Cat may have produced a mountain snowmobile that is so lively, active and quick-to-respond, that some mountain riders may be surprised – caught off guard. We wrote something similar about Ski-Doo’s new Gen-4 850 REV Summit X and SP.

Whoa now, hold on, the Gen-4 Summit is an all new, from-the-ground-up, REV Summit and it should be as quick and agile as an NFL fullback changing direction. Well, give Arctic Cat its due honors; Cat has done so on a chassis that is five years old. The ProClimb MC 8000 has finally – finally – achieved what it was meant to be. Now, this is difficult for us to write about. Each year we report the M8000 Sno Pro or Limited is this magazine’s “Most Improved Mountain Snowmobile of 20XX.” The Thief River Falls-based company keeps tweaking, modifying and adjusting the ProClimb chassis to be better – modern. Competition does this. 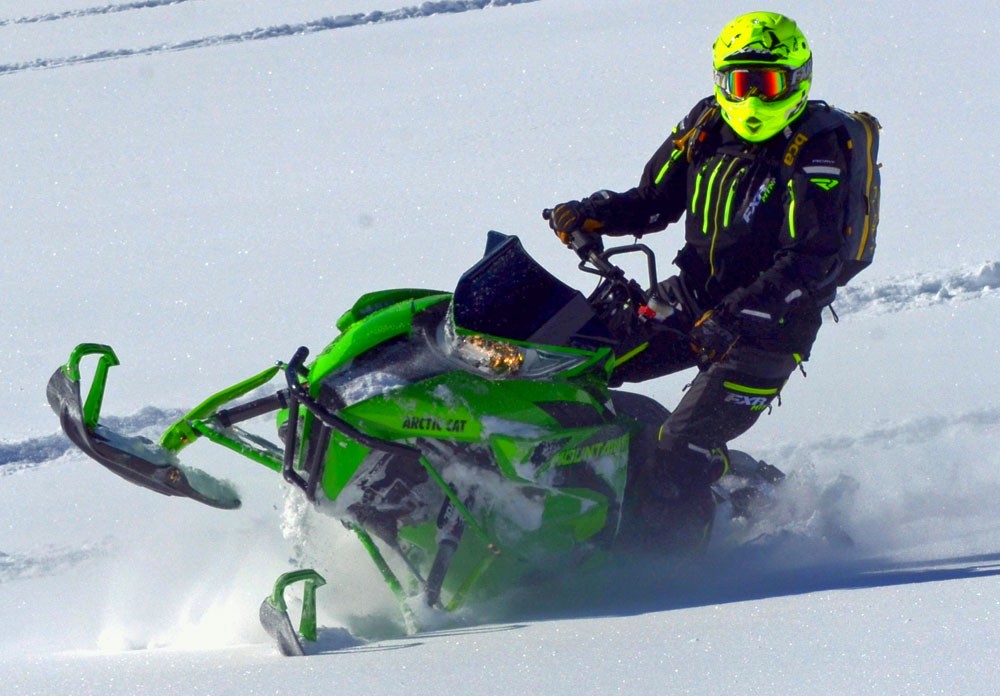 Rolling right or left on the Mountain Cat takes little effort. Straddling the seat and pressing down on a runningboard is all that is needed to carve out your initials.

Social media also pushes for-profit companies to outsmart and, hopefully, be ahead of the competition. No business wants “3 Stars out of 5 stars” and few “Likes.” Snowmobile forums can also increase or slowdown a snowmobile’s sales.

Regardless of the talk on “Stars” and “Likes,” the ProClimb chassis M8000, in its introductory year, came to market unprepared to be a mountain slayer.

We’ve seen this similar situation before: The Fusion 900 RMK from Polaris, and the XP Summit from Ski-Doo. These were right-idea mountain snowmobiles, smartly marketed, brilliantly executed, but wrongly-engineered from a de facto trail snowmobile to be, simply, a mountain snowmobile – with long rails, tall paddles and tall bars.

Back to the Mountain Cat topic at hand. Arctic Cat’s mountain team, now championed by Andy Beaves, who with field workers and engineers and a project lead, Todd Tupper (Team Arctic Hillclimb racer, ProMasters Class) have chipped away at the M8000 stone to carve out what is handed to you today, an M8000 that is so responsive to driver input – signals – from foot pressure, shoulder dip, foot position, and hand pressure, the driver may want to dose up on some 5-Hour Energy before hitting the steep-n-deep.

We admire Arctic Cat for not giving up. Cat is bloodied and bruised from journalistic beatings, forum floggings and naysayers, all of which has motivated Arctic Cat to square up at the shoulders and forge ahead. Ski-Doo and Polaris helped as well. The 2017 MC 8000 is a darling mountain snowmobile, every bit as worthy to be a premier two stoke-equipped mountain snowmobile as Polaris’ AXYS RMK Pro and Ski-Doo’s Gen-4 REV Summit X. 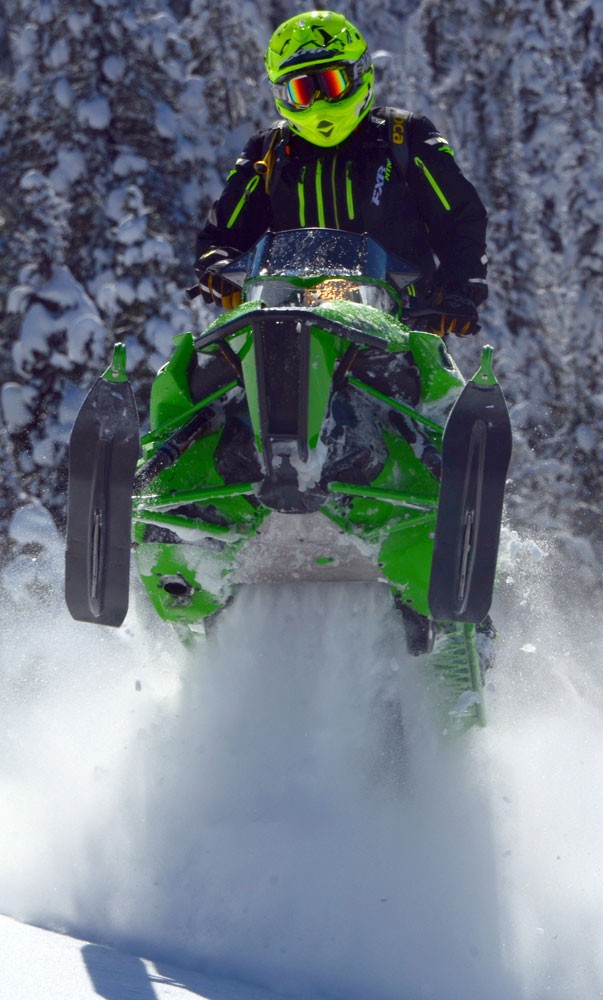 The Mountain Cat with its meaty three-inch PowerClaw track and Team Industries’ clutches, will wallop most snow drifts with a metal club. This is Cat’s best mountain slayer to date.

But, Cat’s mountain team is challenging itself as well.

We’ve heard this already on the MC 8000: “It’s still heavy,” and “How can it be that good?” The way it performs on the snow, it doesn’t feel heavy and it is light in the hands.

“It’s looks so yesterday.” Ok, I’ll give you that, but it performs like the future is here.

First is the reliable Suzuki-built, but Arctic Cat-designed 800 H.O., a motor we all know so well. This fuel-injected twin-cylinder two-stroke motor is dependable with a low, low history of problems and failures. It is a motor that gains no attention – as a breakdown king.

Unique to the MC is its dropped and rolled chaincase (the Limited, Sno Pro and SE/ES 8000s do not have this feature) that allows the big-lug three-inch PowerClaw to roll around large diameter eight-tooth drivers. With this comes a track-to-snow approach angle that is shallower than its other M8000 siblings. This track drive configuration changes the MC’s personality to be that of Limited and Sno Pro really quick to what-the-heck-just-happed-here really, really quick. 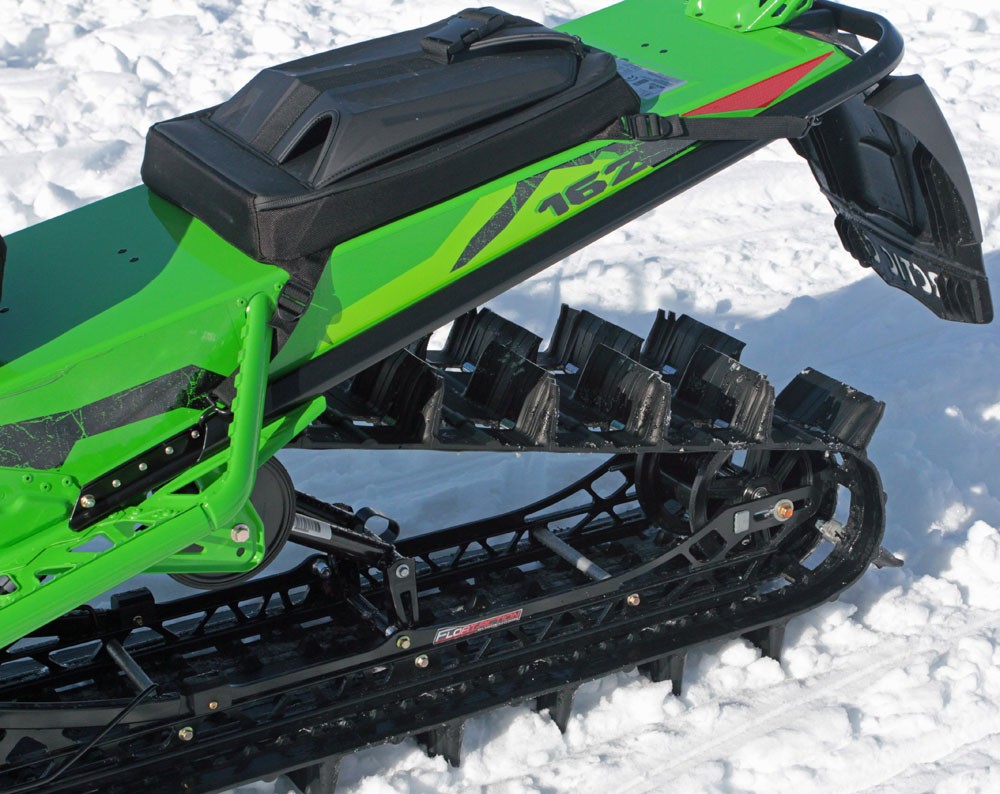 What else makes the MC 8000 lickety split? First and foremost is the 1.125-inch dropped chaincase and larger-diameter drivers. Second are its cinched-in lower side panels. These panels were pulled in tighter to help the MC 8000 stay connected to the snow on a steep sidehill cut. Third, the narrowed up runningboards – to work in tandem with the cinched-in lower side panels – keep the MC nimble on the steep slopes. With the 1.125-inch dropped chaincase, the track’s approach angle to the snow, dropped 9.7-degrees shallower, at the point where track contacts the snow.

Where the runningboards and lower side panels meet, which is the foot well area, the right and left foot wells were opened up to give the rider more real estate to move forward and to kick out a heel in a more aggressive forward position. This also aids in the MC’s sped-up agility. 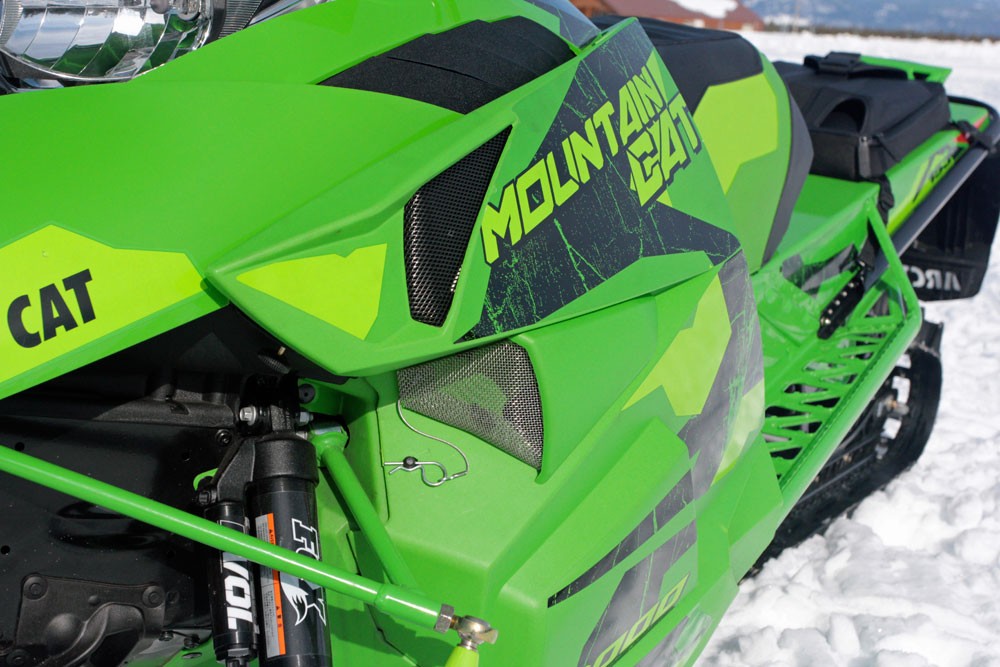 Keys to the MC 8000’s much improved agility are the cinched in lower panels, narrowed in runningboard and opened up toe wells.

These adjustments – dropped and rolled chaincase, larger track drivers, narrowed up boards and panels and opened up foot wells – are dump truck huge when it comes to handling.

When piloting the MC 8000 in deep snow, when coming up out of a tree blow hole, or climbing a steep ascent, it is best to step forward into the foot wells and place your body close to the handlebars – this aids in keeping the track drivers churning. No more will drivers need to death-grip the handlebars, place their feet one-third to half-way back on the boards and stick out their butt like a hood ornament to climb and maneuver the 8000. Keeping a natural standing position – a neutral position – will cover most riding situations.

However, if needing to seat- and board-hop to set up wrong-foot-forward driving, or both-feet-on-one-board driving, be conservative, not liberal, when doling out board and handlebar signals – the MC 8000 needs minimal input – too much action to the bars and boards will make it offload its rider.

Yes, Arctic Cat has reached a point where aggressive mountain riding requires a not-so aggressive attitude; and this is the beginnings to be the new “aggressive.” Relax and enjoy the ride and go home fresh and invigorated knowing with little effort you conquered the steepest steep and deepest deep.

Built into the MC 8000 is the hardy and trusty Suzuki batteryless EFI twin cylinder two-stroke motor. This motor, in snowmobile history books, is one of the most reliable two-stroke motors ever assembled. The motor’s bore and stoke is 85mm by 70mm with an actual displacement of 794cc. Bolted to the motor is the Arctic Drive System (ADS) which includes a lightweight magnesium chaincase cover, a large Team Rapid Reaction BOSS driven clutch and Team Rapid Response drive clutch. These clutches add to the MC’s luster as a pure mountain rider’s mountain snowmobile. Gear ratio for the MC is 19/50. 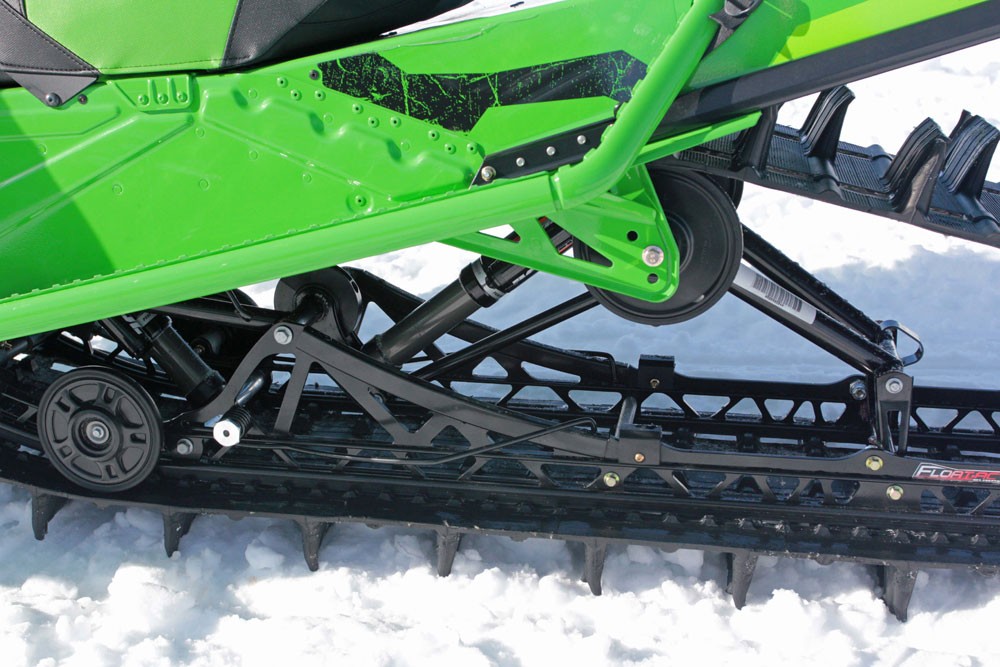 The Arctic Mountain Suspension (AMS) tracks on the ProClimb-7 ski, which is an improved ski from the ProCross ski. But we implore Cat to purchase Yamaha’s new mountain ski – since the two share in motor and chassis swaps. The Yamaha mountain ski is a superb mountain ski. Ski width is an adjustable 34.5 inches to 38.5 inches; the middle position, we’ve learned, is overall best, but the driver must determine this based on snow conditions. Front suspension travel is seven inches. Bump smack is managed with Fox Float 3 Evol shocks.

The rear suspension is the Float-Action with Fox Float 3 Evol shocks taking the hits; Evol 3 R is the rearmost shock. Travel is 16.5-inches.

The MC 8000’s handlebars rest on a 4.5-inch post; other optional posts are available from Arctic Cat. The overall steering system is vertical. 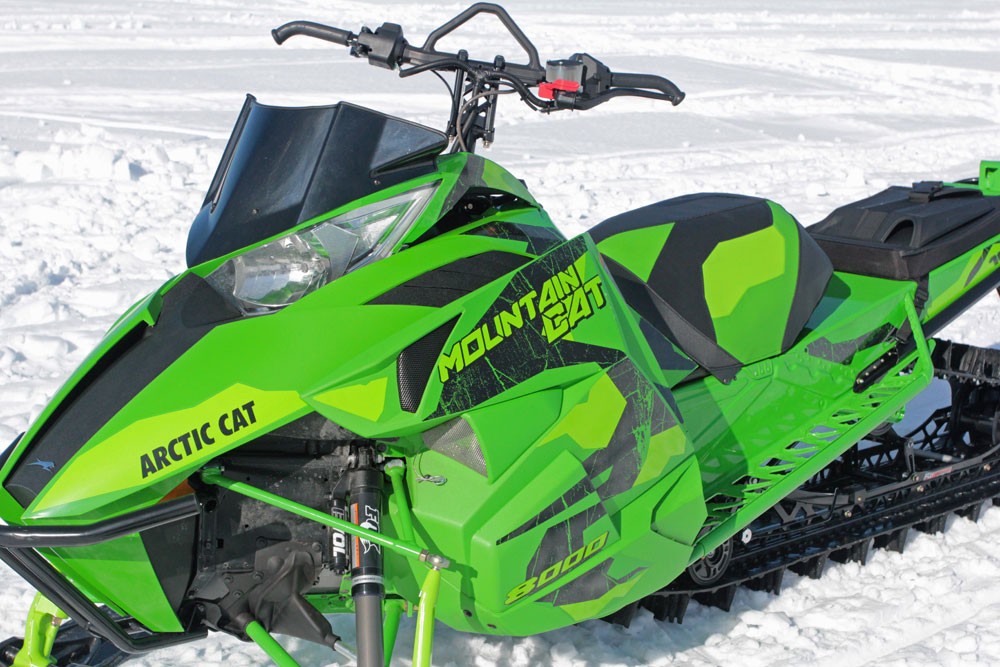 A few weight loss components include the magnesium chaincase housing, HCR-type cooling, fixed vertical steering post, PowerClaw track, ice scratchers, lightweight brake disc, open hyfax rails, and ProClimb mountain seat. Arctic Cat is against the wall on the weight-loss movement. We believe Cat will figure it out. But, here is the truth. The MC 8000 as well as its sibling the Limited, feel as though these two 800s are the lightest on the snow. Our seasoned guest-test riders state this – often. Furthermore, M8000s don’t break. You want a balanced, nimble, quick, feathery-light-through-the-handlebars mountain snowmobile, then the MC 8000 is your sled. In testimony, it may weigh more than the RMK Pro and Summit X, but it pulls out of the hole and climbs with these without faint or worry. The MC 8000 can put it to the snow. That’s no Bull!

David McClure, official Team Arctic professional hillclimb racer, Arctic Cat sponsored backcountry athlete and ambassador, said this of the Mountain Cat: “The new Mountain Cat sidehills better than any snowmobile I’ve ever ridden. Even though the Mountain Cat doesn’t look much different than a [the] 2016 Arctic Cats [M8000 Limited], it feels like a totally different machine.”

We agree on all points.

The bright lime green MC 8000 is a statement maker. We know for 2017 the Gen-4 850 REV Summit X will gain the most attention. Coincidently, the AXYS Pro-RMK will continue to be popular. For us we simply ask you to give the MC 8000 a chance; you’ll be freaking surprised – amazed – at how wicked fun, nimble and responsive it is. You just need to be able to keep up with it.