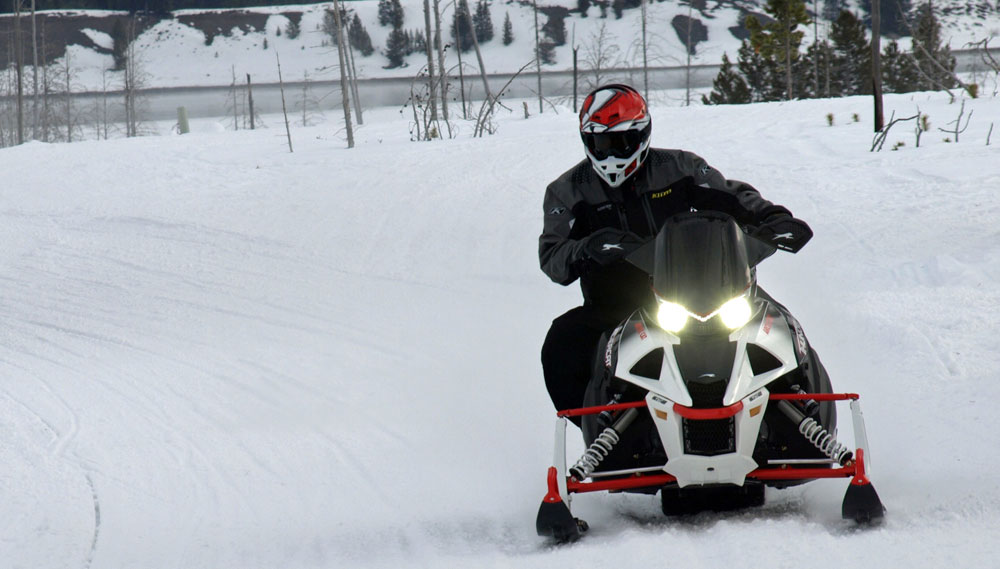 Arctic Cat reaches back into its illustrious heritage to bring you an all-new Thundercat that is more powerful and faster, and, oh so much smoother and quieter than its two-stroke predecessor, which ruled the snows from 1993 to 2002.

The born-again T-Cat features an all-new Yamaha-derived 998cc turbocharged four-stroke that is claimed to put out 180 horsepower. The all-new 21st century Thundercat allows Arctic Cat to retain its big performance image as the now discontinued turbocharged Suzuki four-stroke twin fades into Cat history. This new Yamaha power-boosted triple is deceptively quick and undeniably fast, moving the big Cat to triple digits within the length of three football fields – or less!

We’re not going to get into any arguments about performance between the Thundercat and its comparable Yamaha Sidewinder partner. The key differences between the T-Cat and the Yamaha come in the clutching. Power-wise everything else should be the same. Yamaha goes with its own newly developed drive and driven while Arctic Cat worked with Team Industries to harness the turbo’s power. The Thundercat gets Team’s latest Rapid Response II drive and Team Rapid Reaction BOSS driven. During our preview rides of the two models, our perception was that the Yamaha felt quicker and slightly more responsive. But, and we do mean but, this was all perception and conjecture of sleds that were clearly, at best, pre-production or straight out prototypes. So, as will we, take our seat-of-the-pants view as unreliable to what the final spec production sleds (Yamaha or Arctic Cat) will be.

Our experience at such ride and photo sessions has revealed our initial impressions may be right for the exact product we’re sitting on, but off when compared to changes engineering departments might make over the summer leading right up to hitting the assembly line.

We have experiences with both Cats and Yamahas that we felt were “off” during our first rides only to discover that the actual full production versions were substantially better when they came off the production line. Keep in mind that each manufacturer uses the photo and ride sessions with the publications to do their own evaluations and that whatever the photo/ride specs are for the evaluation sleds, they usually are not the final specs. We strongly suspect that the Thundercat we rode got revised settings each day we were on site. 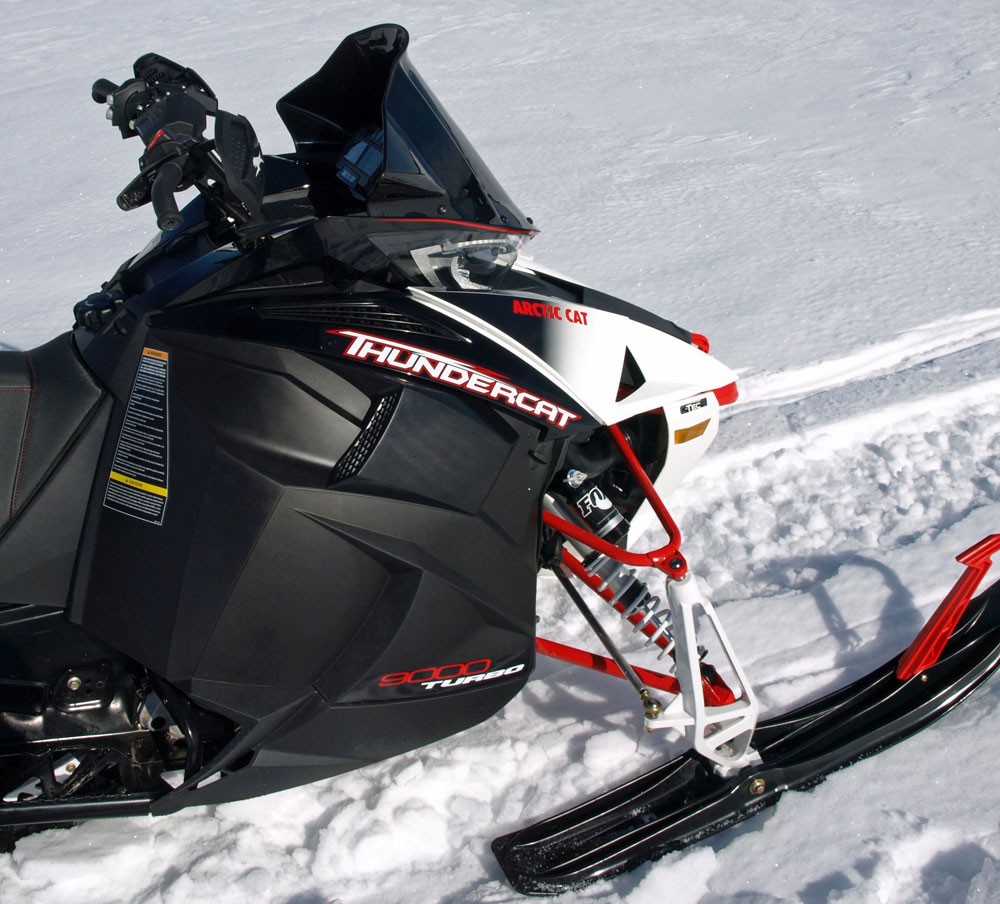 To fit the new turbo under the hood, Cat engineers redesigned some body panels, which give the T-Cat a wider, more aggressive look.

That leads us to remind you – and ourselves – that this is mindful of exactly what happened when Yamaha introduced the Viper a few years ago. At that time, we felt the Cats were superior in set up and that the Yamaha clutching was off compared to the Cat clutch set up. Whatever. By the time full production rolled around, changes had been made and Yamaha closed our perception gap. We figure that this time, Yamaha, which had more development time with its new turbo, had more time to get a favorable clutching spec. And, lest we all forget, Arctic Cat likes it four-strokers to free wheel like a two-stroke and Yamaha prefers a touch of engine braking. Each manufacturer has its own preferences and designs performance around those parameters.

Back to Thundercat basics. The 2017 Thundercat with the 137-inch Ripsaw II track will make serious Cat fans ecstatic. The get up and go is very real. There isn’t the big bang thunder you’d associate with the original 1993 T-Cat’s 900cc case reed two-stroke or even the larger 1000cc displacement of the triple-cylinder 1998 version. The stock two-stroke was said to produce 175 horsepower. There is thunderous response from the new Yamaha turbo, it’s just quieter and smoother. This stock 2017 version delivers its power, all 180 horses, in a very smooth manner, almost turbine like. Without taking a decibel reading, we’d guess the 2017 turbo Cat most likely will prove quieter than any normally aspirated Cat versions with the 1049cc three-cylinder four-stroke. 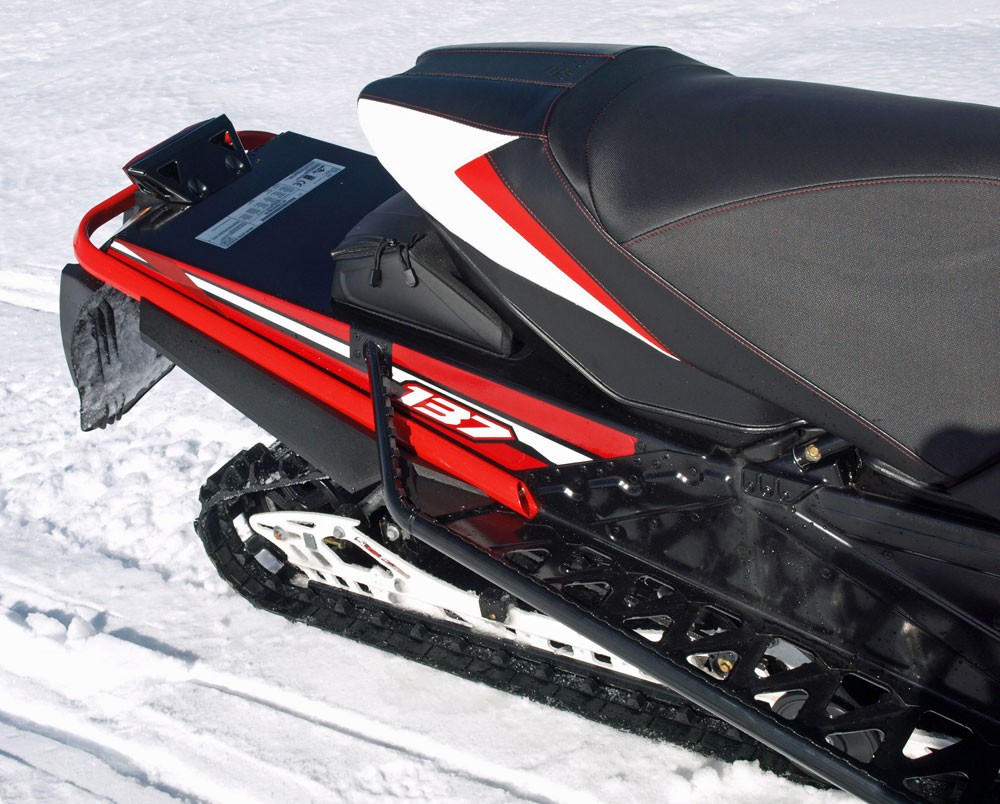 With the Thundercat’s available 180 horses, you’ll appreciate the grip of the 137-inch Ripsaw II track with its 1.25-inch lug profile. Note the standard tunnel bag and snow evacuating runningboard.

If you opt in for the Thundercat and are coming off the previous Suzuki turbocharged Cat, you’ll immediately notice improvements. The Yamaha turbo uses a system common to automobiles. This new turbo system was developed with turbo supplier IHI, a Japanese-based company with engineering and manufacturing capabilities in Tennessee. The Thundercat features a state-of-the-art RHF series IHI Turbo that was developed primarily for small displacement engines — usually for automotive use. These high performance turbochargers offer reliability, superior performance and a compact design important for shoehorning extra performance into a snowmobile’s engine bay.

Unlike the previous turbo design, the Thundercat turbo doesn’t wheeze and noisily blow off steam. Except for tapping the throttle trigger and watching the speedometer digits begin their quick move to higher numbers, you’ll think this power plant is as tame as the one in your car. That’s the point. If not for its distinctive Thundercat graphics, this sled could be a stealth ride as it’s quiet, but ready to roar with wide open throttle. This Cat is extremely responsive and deceptively quick, which translates to really fast. 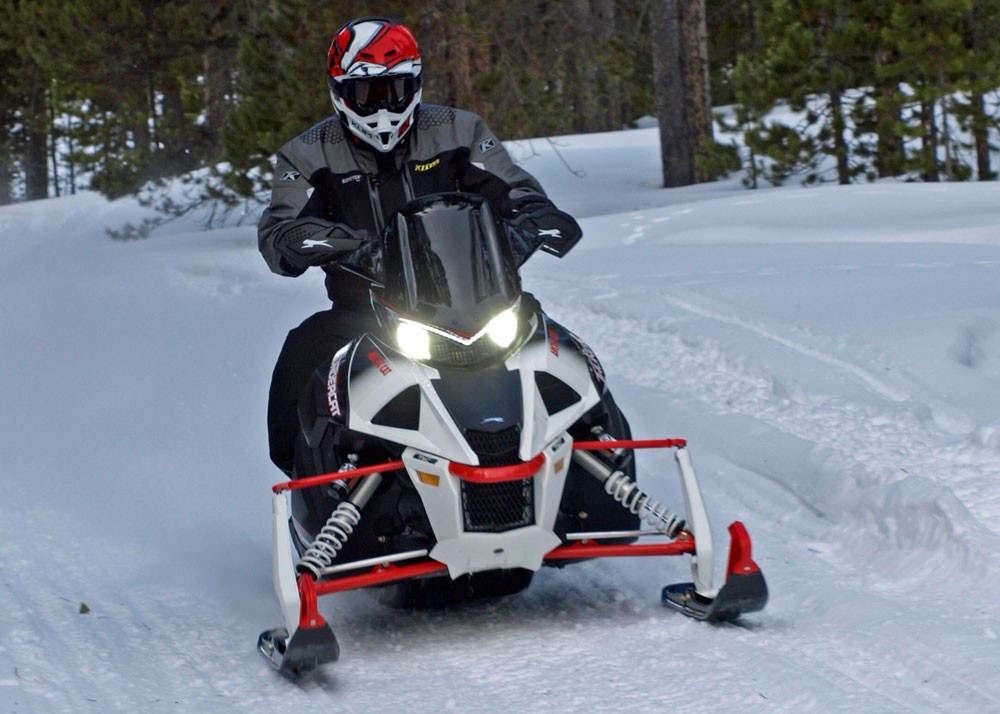 Like a high-end sports sedan, the Thundercat’s accent lighting adds an aggressive trail presence to its wide-stance ARS suspension profile.

Although the new turbo Yamaha power system is key to the Thundercat, this 2017 version is light years ahead of the original in every way. The latest Cat Procross platform brings race track ruggedness to the trail with its aluminum extrusions that meld with a series of forgings, castings and stampings to represent the most durable, technically efficient snowmobile platform Arctic Cat engineering has ever created. Light in weight, the base chassis can be fitted with the latest iteration of Arctic Race Suspension (ARS) up front and smooth riding Slide-Action suspension at the rear.

Arctic Cat has earned a reputation for on-trail handling and off-trail prowess that is real. The tall spindle action of the ARS front end features compliant, yet easily tuned Arctic Cat specified Fox 1.5 Zero QS 3 three-way quick action shocks to control upwards of 10 inches of travel. Note that the ARS directs trail action – big and small bump hits – to the sled’s forward central area to absorb the blows as well as keep the ProAction-6 skis planted for cornering grip. 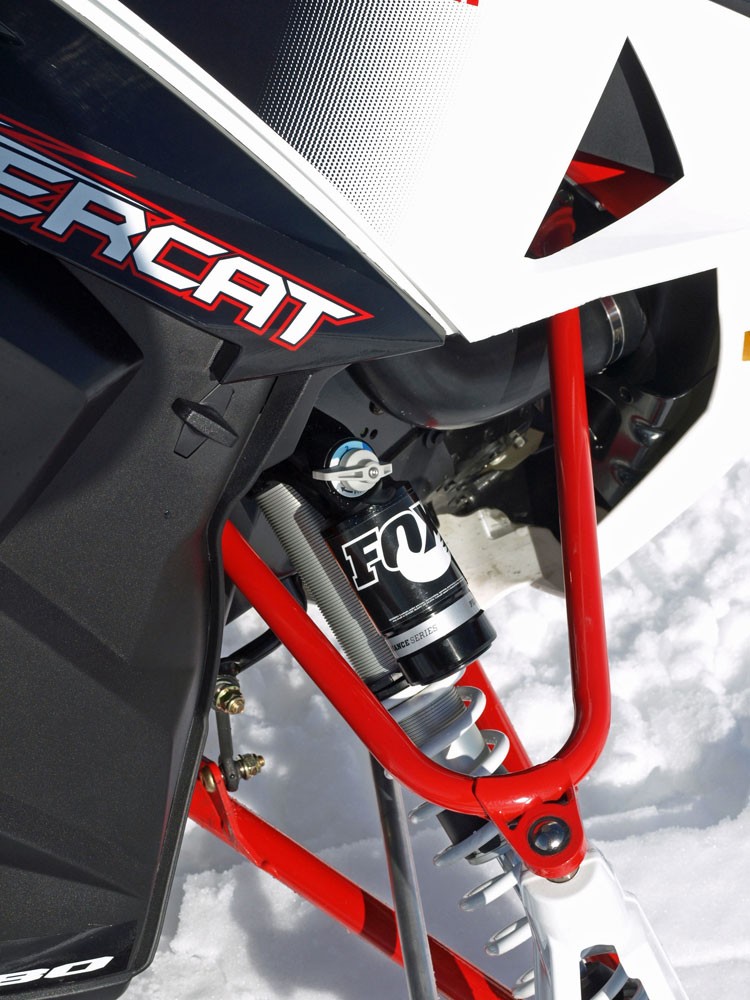 The Slide-Action rear suspension may be the most under rated snowmobile suspension of modern times. You won’t find trick runningboard mounted adjustors or an externally mounted rear shock, but what you will find is an amazingly simple half-inch of slide action that engages a set of rear transfer blocks to maintain control under acceleration or hard braking. Developed for racing applications, the sliding action works equally well for hardcore trail riders. We especially like this slide-action system because it’s consistent and doesn’t leave you with any surprises, like unexpected ski lift coming out of a corner under power. With the Thundercat’s horsepower that would not be a good thing!

The overall design of the Thundercat, and virtually all “9000” series 2017 Arctic Cat models, reflects concessions made to fit the new turbo motor under the hood. You’ll note unique Thundercat packaging that carries a black, white and red color scheme with no Cat green at all. The side panels have been changed out for fitment purposes and the nose area was redesigned to accept more air for engine breathing and cooling, Styling-wise the use of hood-mounted LED accent lighting gives the new T-Cat a bold look that is aggressive and immediately noticeable on the trail, which is a plus. While there is no Cat green, the Thundercat remains handsome, making a bold statement, which will be obvious once you engage the throttle.

We found the driver’s cockpit area to our instant liking. The seat is heated, which is a plus, but what really counts is how it’s designed to allow easy and instant rider-sled interaction. Tlhe handlebar can be fitted to your style and the 5.5-inch riser complements the seating to keep you in control as you stand to work through deep moguls. 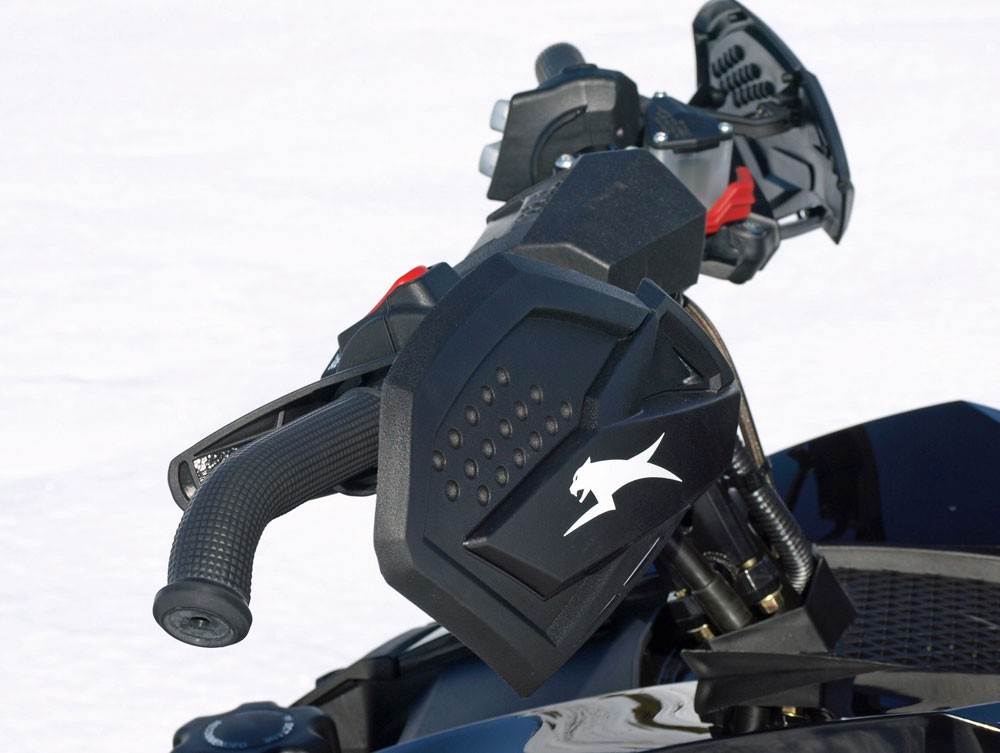 The 5.5-inch riser lifts the curved handlebar for excellent accessibility for stand-up action of seated cornering.

Although the Thundercat’s stated mission is all-out performance, it’s still a sport sled with luxury fittings. There’s the rear tunnel bag for convenience. Premium brake for on-trail control. Speaking of which, this unit comes with the Sno Pro lever, meaning that the brake lever curves conveniently for quick finger tap control. You need to try this. Once you do, you’ll demand it on all of your future sleds

Of course, if you want more personal customization, you can order it from your dealer, who can dress your Thundercat with extra gear including a goggle warmer and such.

The Sno Pro curved brake lever adds control as you can simply reach out and give it a finger tap to control speed approaching a turn.

If you order this “spring only” limited edition Thundercat, you’ll quickly learn that this sled requires your undivided attention as it is quiet and quick. Even a little non-aggressive throttle motion will be interpreted to mean go! So, no texting while riding!

The Thundercat returns a heritage name in a sled that is light years ahead of the original in every aspect. This is Cat’s version of the red sports car and the answer to anyone’s mid-life crisis, whether you’re having one or not! But if you want one, hurry, because this is a limited edition with a limited window for purchase.