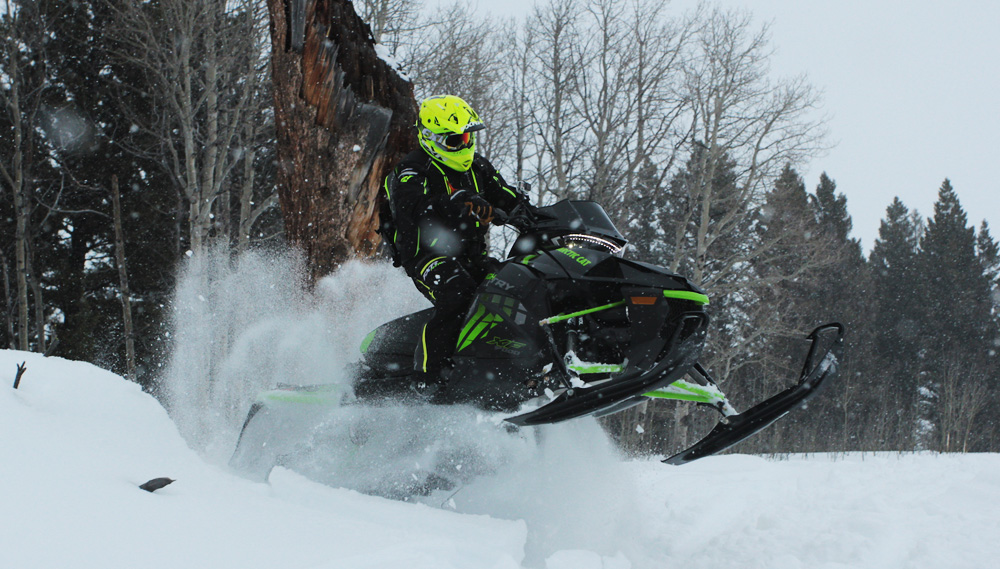 Arctic Cat has an arsenal of deep-powder and crossover snowmobiles that can satisfy any mountain hungry rider. Cat’s M series, 8000, 7000 and 6000, are truly narrow and nimble mountain snowmobiles. But, Arctic Cat also has a crossover line that can both wallop a mountain and tame trail, all within margin of operation. Crossover snowmobiles are meant to be an all-the-above snowmobile. Some crossers have powder tracks with tall lugs, some have trail-attack tracks, some will have a center-mounted pull strap on the handlebars. Most will have a trail banging front suspension with an uncoupled rear mountain-suspension.

Arctic Cat has two crossover snowmobiles that are similar in looks and mission, where one is more deep-powder-oriented, the other, more trail-oriented; these are the XF 9000 High Country in the ProClimb chassis, and the XF Cross Country in the ProCross chassis. The High Country (HC) is the pow pow eater, the Cross Country (CC) is the trail- and meadow-burner. Both crossover breeds are long track snowmobiles to bring comfort over the trail whoops and flotation in powder, within reason. Both are powered by the new Yamaha 998cc turbocharged four-stroke three-cylinder motor with approximately 185 horsepower; perhaps more.

We focus here on the ProClimb XF 9000 High Country (identified in this article as HC).

The two-stroke powered ProClimb XF 8000, sibling to the 9000, for several years now has been one of our all-time favorite deep-powder crossover snowmobiles; and we’ve crowned the XF 8000 High Country as our Deep Powder Crossover Snowmobile of the Year several times since this model came to market. This earned status is due, in part, to feeling very M series-like in the mountains, as well as ProCross XF CC-like on the trails.

For this year, the XF 9000 HC comes to market with more gunpowder – the Yamaha 998 three-cylinder boosted big caliber four-stroke motor. The original turbocharged ProClimb XF HC was the XF 1100 High Country, later to be known as the XF 9000 High Country.  The early XF 1100/XF 9000 HCs tore up the trails and tree-lined hills and dells with Suzuki power, a 1056cc turbocharged large-bore twin-cylinder four-stroke motor that, at peak RPM, rolled out 177 hp. In the cobweb annuals in our history trove, when we did buck the moguls and mountains on a Suzuki-powered XF 9000, we enjoyed the ride – except when pulling a sidehill cut across a steep slope with hero snow. Its wide ski-stance, engine weight and swaybar-equipped front end made this a chore. 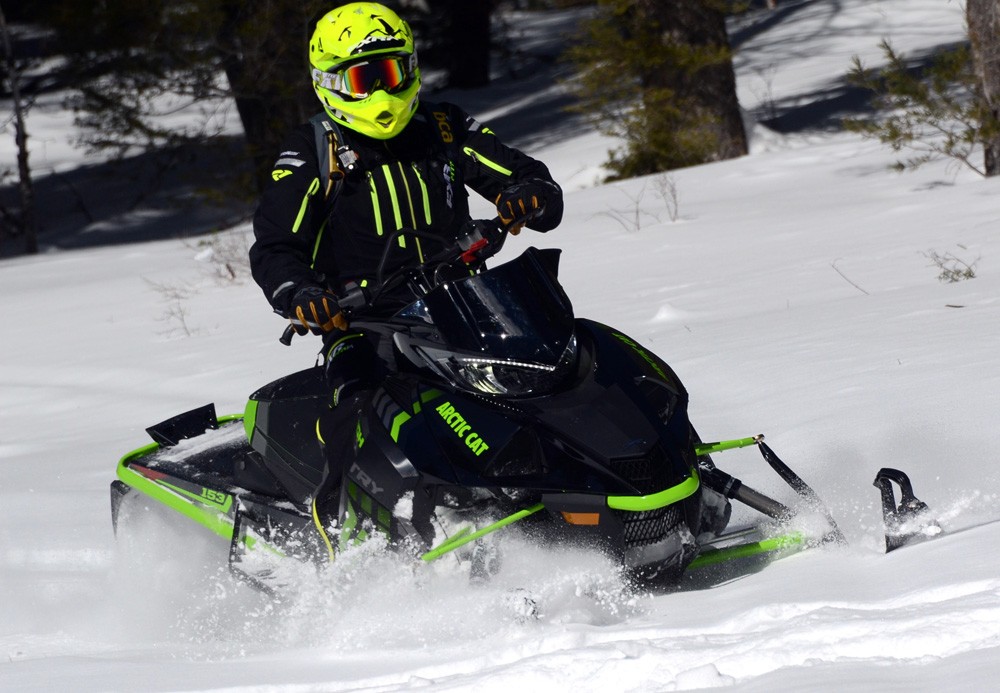 Returning to the 2017 XF 9000 HC, as you know, this particular 9000 has the jointly produced (designed) Yamaha 998 triple-banging four-stroke with side-mounted turbo. Both Jerry Bassett and I have written extensively on this motor, and we suggest you follow our story links to ascertain the tech knowledge to sass up your turbo-speak. But in short, the 2017 XF 9000 HC has more horsepower than the Suzuki motor. Power-to-weight favors the 2017. 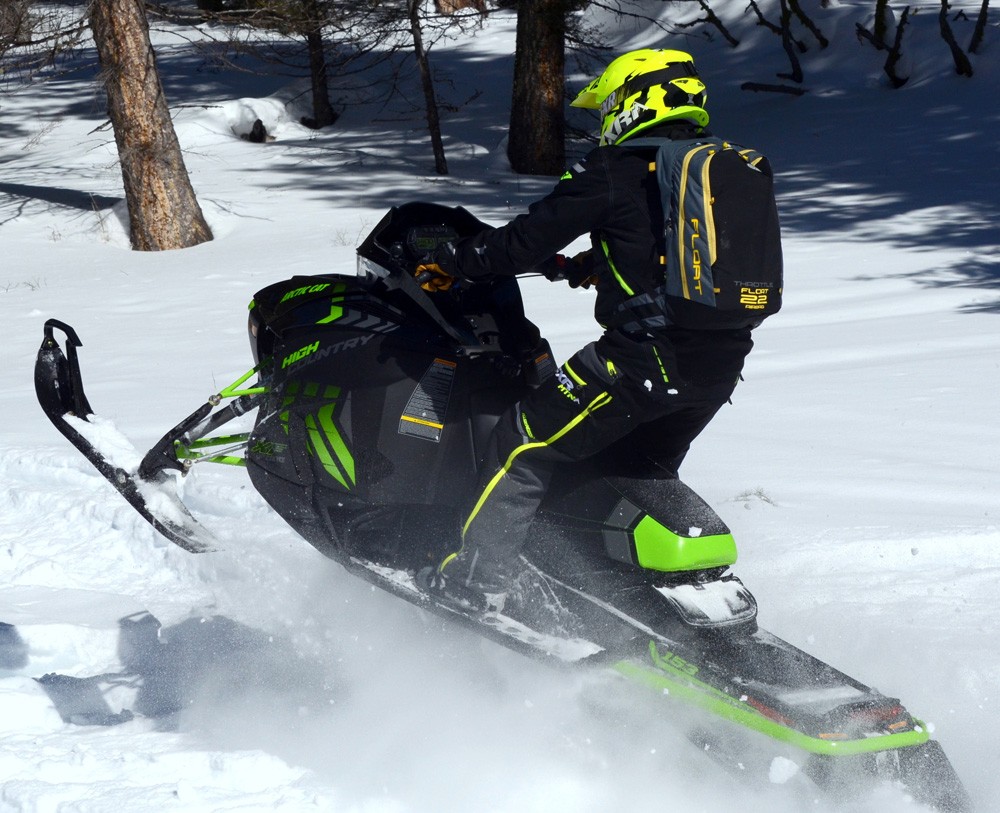 The 141 XF HC with PowerClaw is are freakishly nimble for its size and weight.

The 153 XF HC 9000 can be ordered/purchased with two track choices, a 151-inch PowerClaw with 2.25-inch lugs, just as the 141 XF 9000 HC, or the snocross competition-inspired 153-inch by 1.75-inch Backcountry X track, which provides a blend of traction in loose snow while delivering flotation and trail riding traction.

We learned at Arctic Cat’s Sneak Peek back in February that Midwest and Eastern-located Arctic Cat customers were swapping out the PowerClaw for the 1.75-inch Backcountry X track, especially on the 153s. The 153-length XF HC 9000 is favored by many as the smooth XF 153 HC as it can case over several moguls at once. For us journalists in the mountain lairs, we like our snowmobiles with long tracks and deep lugs. For the flatlander, we fully respect your wants and wishes as well. But, for you who purchased a High Country with a PowerClaw or Backcountry X track and you desire the other track, then Arctic Cat, through the dealer that sold the snowmobile, can exchange the track, provided the track remains new – never used. However, some costs apply. Be wise and have a discussion with the dealer.

The High Country’s front suspension is the Arctic Mountain Suspension (AMS) with sway bar and its shocks are the light Fox Float 3 EVOL. The AMS has nine-inches of travel. Ski stance is an adjustable 38.5-inches to 42.5-inches; middle- to narrow-stance is our recommendation for boondocking use. Ski is the ProClimb-7. 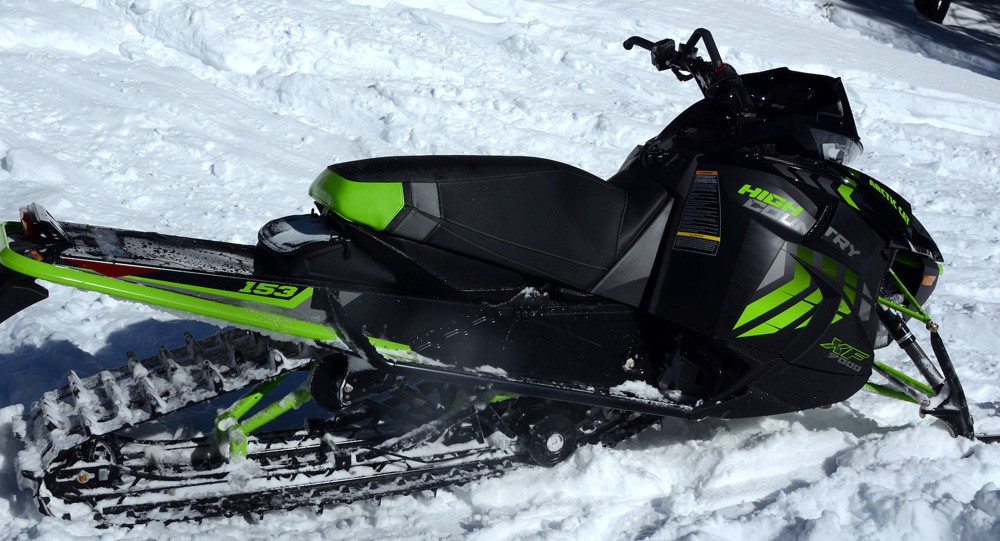 The drive and driven clutch make up what is dubbed the Arctic Drive System (ADS) that also features a lightweight magnesium chaincase. The drive clutch is the Team Rapid Response II and the driven clutch is the Team Rapid Response Boss. The Rapid Response II drive clutch has an auto-adjusting belt tension device that assures consistent belt performance and squeeze without manual adjustments. It also features a 12.5% lower effective starting ratio while maintaining the top ratio for smoother engagement. Gearing for the two chassis lengths is 21/49.

The vertical handlebar post is a fixed post with a 5.5-inch riser. The seat is the light mountain seat. Being this is a “Limited” model, the 141 and 153 have the Limited front bumper and amenities such as goggle storage bag, rear seat storage, 12-volt outlet and heated seat with high- and low-settings. For really cool appearance, it has low-light accent LED lights that surround high-output headlight. We like the appeal. 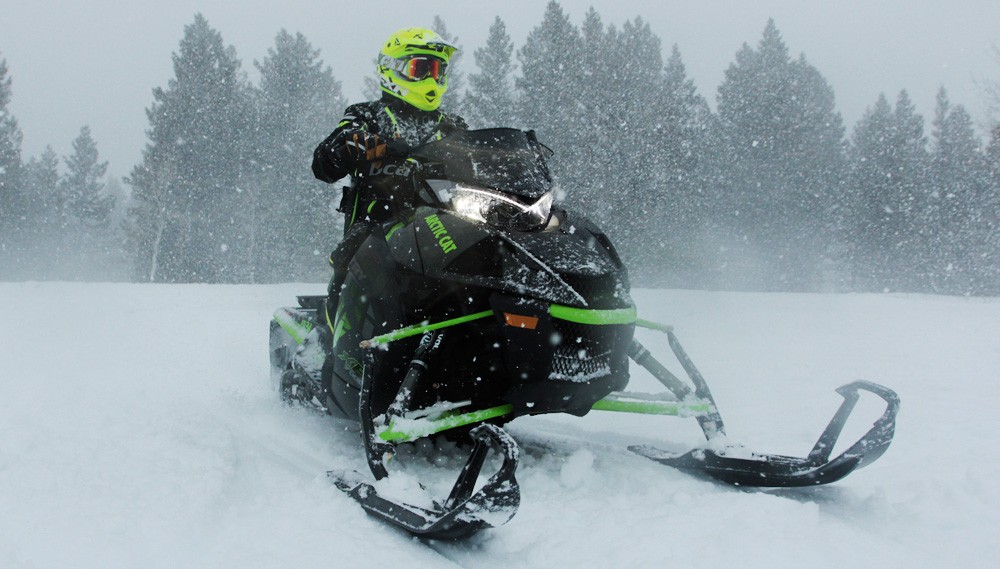 The hood and side panels look similar to the XF 8000 High Country but have subtle differences to manage airflow – in and out – and underhood heat.

Standard is a mountain strap on the handlebars, throttle and thumb warmers, electric start and electro-mechanical reverse.

This brings us to the fun – driving the 9-triple-zero ProClimb XF High Country.

Eyeballs water, arms and shoulders stretch, trees blur and the MPH clock hits our favorite number: “Oh wow.” The 998 turbo is tame in sound and in a low-speed lumber; it is happy in poop-along mode. But when Zeus and the Greek gods come to battle, then hold on to your star floating chariot as its mighty horses will blast wide open the winter expanse with turbo’d lightning bolts. 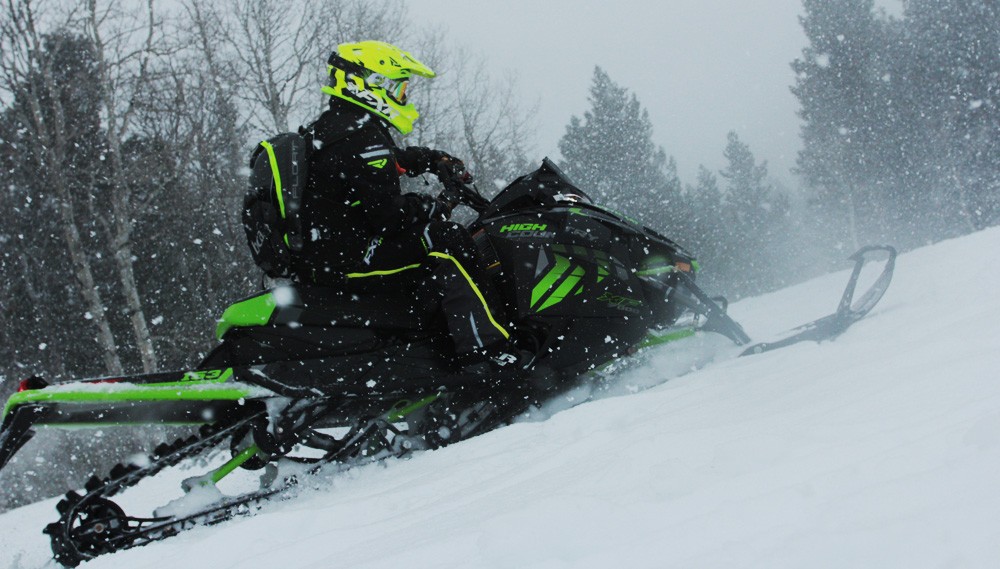 Although the 998 turbo is tame in sound and in a low-speed lumber; eyeballs water, arms and shoulders stretch, and trees blur when you engage its warp drive.

The 141 XF HC with PowerClaw is snocross-like. It is freakishly nimble for its size and weight. Its limiting factor on high-speed twisty bends is its vertical steering post. But, with some simple body-position adjustments, driving a nail on the rail is simple hammer work; it drifts very well through the tight lefties and righties. In the deep, though, the 141 spins its tracks with vicious speed; drivers need to manage the torque when playing hooky on a mountainside.

The 153 XF 9000 HC is more M series-like; its chassis length gives it more mountain appeal than the 141. The Backcountry X track is more suited for trail while giving some floatation due to its length. But, it is more adept to deep powder riding in meadows and on farmland. The 2.25-inch PowerClaw changes the 153’s personality – totally. The PowerClaw track will burn the farmland powder and will tear up the backlands near Togwotee Mountain Lodge, if you understand its limitations – weight and wide ski-stance (with the swaybar, cinch in the stance to middle, or narrow). This is true too for the 141 HC, but the 153 will have an edge due to its length.

From several days’ riding, the HCs with the turbocharged motor are two snowmobiles we can grow quite fond of. No, these would not be our first choice for deep backcountry boonie-mashing and tree-running in the steep-and-deep, but if trail cruising, meadow playing, mogul bashing, and limited deep-powder boondocking is on your to-do list with turbocharger-built goose bumps covering your skin, then the XF 9000 HC 141 and 153 can, and will, check off these items.