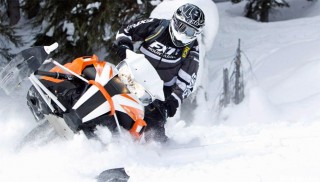 Cat takes you from trail to backcountry with refined features

A number of years ago we started seeing a serious move by the OEMs toward a new breed of crossover snowmobile. The first crossovers were somewhat middle of the road and, usually, there was only one chassis choice. For many years Arctic Cat had only its Crossfire line, basically a Mountain M chassis that had wider A-arms, a taller and longer seat, a taller windshield, and a deep-lugged Cobra track. This pleased some consumers, but not all.

Today the crossover segment that Cat labeled as the XF line is very diverse, with three chassis to choose from. The XF line offers the Pro-Tour, ProCross, and ProClimb chassis. The ProTour and ProCross chassis are better suited for the trails, but offer an acceptable amount of backcountry performance. Since it is built on the ProClimb chassis, Cat’s XF High Country leans more to a mountain sled that offers an acceptable amount of trail performance.

The XF High Country was built with the Midwestern rider in mind; the rider who spends a lot of his time riding off the trail and makes the occasional trip out west to ride in the Rockies. This sled is much better suited for the trail than a mountain sled.

COMPARISON: Read our review of the 2015 Ski-Doo Renegade Backcountry 800 + Video

Many Midwestern riders ride the trails on a mountain sled waiting for the occasional trip to the west. In reality, they would be much happier on a crossover snowmobile – specifically the XF High Country.  Another reason to purchase the XF High Country over a mountain snowmobile is that it comes from the factory with longer heat exchangers to cool the engine coolant faster and easier. On early morning trail rides in sub-freezing temperatures, mountain snowmobiles tend to get hot rather quickly because they have shorter heat exchangers. To remedy this, mountain riders have ice scratchers that they deploy from the skid that dig into the trail to flip the snow onto the heat exchanger to cool it down. 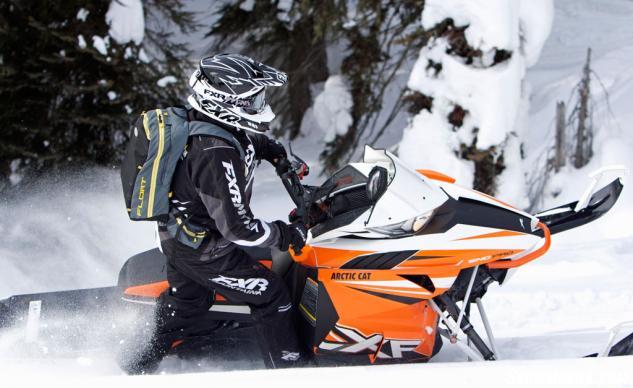 Cat’s XF 8000 High Country combines proven reliable Suzuki two-stroke power with a set of TEAM clutches for consistent on or off trail excursions.

The heart of any snowmobile is the engine and the Suzuki-built 800cc HO two-stroke gets the blood pumping for the XF 8000 High Country. This engine has had a number of years to prove itself as quite possibly the most reliable 800 on the market. Pushing out about 160 horsepower, this powerplant sports dual spark plugs per cylinder that make the engine more efficient by increasing the amount of fuel that is burned, thus increasing horsepower. The crankshaft has proven to be very reliable and able to withstand many years of hard riding. It is fitted with electronic reverse for simple push button operation.

For 2016 Arctic Cat joined forces with TEAM clutches and outfitted the XF 8000 High Country with a TEAM drive clutch and TEAM BOSS driven clutch. One of the biggest benefits that Arctic Cat will gain from its partnership with TEAM is the large amount of readily available helixes, springs, weights, and tools. TEAM is well known for an ability to reduce belt skid or belt slip, which happens when the belt slips in the clutches. This increases the temperature of the clutches and leads to premature failure of the belts. By reducing belt skid, more power is also transferred to the track. Arctic Cat’s race department has been using TEAM clutches for around 10 years and has a strong history with TEAM. It wasn’t a big jump to make TEAM clutching standard equipment on the majority of the 2016 Arctic Cat line up. 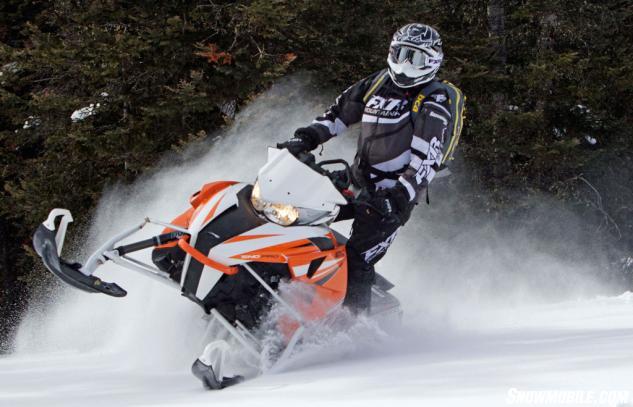 The XF High Country 800 is a great option for the consumer trying to balance the trail versus mountain performance they desire. With its wider front end it will be much easier to ride the trails at high speeds than a mountain sled. The PowerClaw track provides great traction in the backcountry. Plus, the telescoping handlebar helps make a smooth transition from trail to backcountry.

The XF High Country is built on the Pro Climb chassis, which over the past few seasons has undergone a few refinements to lighten it and make it more responsive. It is a rigid chassis that will not flex with rider inputs, unlike the Ski-Doo T-3 that is designed with a chassis and track that flex and dampen rider inputs.

Arctic Cat is keeping its chassis neutrally balanced, meaning that it is not a rider forward chassis. When we conduct our annual long-term tests, we weigh the snowmobiles by picking them up at the handle bar and invariably find the Cats are nearly flat. A balanced chassis means that it should remain predictable as the rider changes positions. 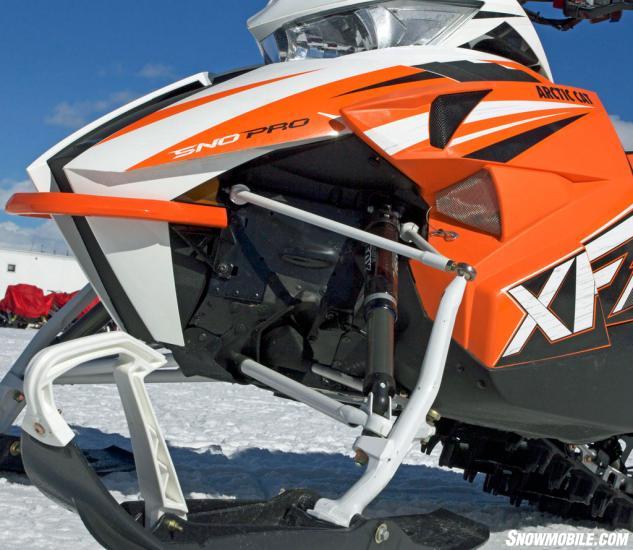 Cat’s new Arctic Mountain Suspension features much thinner spindles that cut out 2.4 pounds and also creates less drag in the snow as you cut into a side hill. Standard front shocks are the proven Fox Float 3 air shocks.

Among the changes to the XF High Country for 2016 are much thinner spindles, which cuts out 2.4 pounds. The thinner spindles also create less drag in the snow as you cut into a side hill. The caster angle of the spindle is 27 degrees, also in an effort to allow it drag through the snow easier. Fox Float 3 air shocks are found in the front end, which have been around for many years and work fine. The Float-Action rear suspension also has a Fox Float 3 on the rear arm, but uses Arctic Cat IFP gas shock in the front. 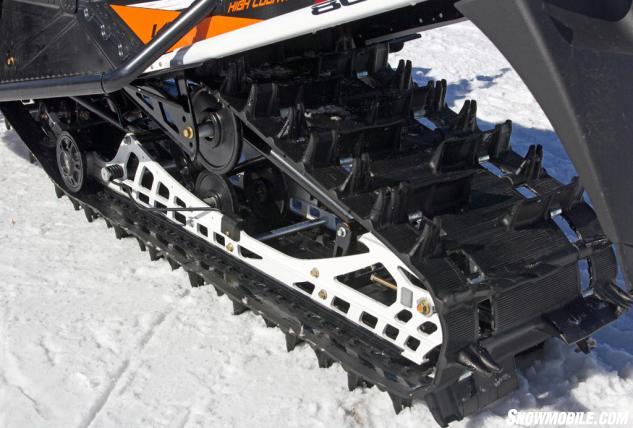 Even though the XF High Country is a crossover sled, it leans more to a backcountry snowmobile than a trail snowmobile. As with all of Arctic Cat’s mountain line, the XF High County has a Power Claw track. It is 141 inches long, 15 inches wide, and sports 2.25-inch lugs. This configuration helps make the High Country highly maneuverable and agile. Although the relatively short track length will leave the XF lacking on big powder days, overall the XF is perfectly suited for the average powder day in the west.

Arctic Cat fits its new Proclimb 7 Ski for 2016. The new ski has a slight taper that goes from 7.0 inches at the tip to 6.5 inches at the center. The belief is that wider in the front helps flotation with narrower at the center improving maneuverability.

The new for 2016 ProClimb 7 Ski has a slight taper built into it that makes it wider in the front to help flotation but narrowed at the center to improve maneuverability.

Cat has also made the ski stance widely varied for 2016. By moving the spacers when installing the skis, the width can be easily adjusted from 38.5 to 42.5 inches. That is a very broad spectrum considering it’s changed by only moving spacers. If your style of riding is in the trees, then 38.5-inch width would be ideal. If you ride on the trails or open backcountry, the 42.5-inch width would be better suited for your style of riding.

Arctic Cat realized that XF High Country riders making the transition from trail to backcountry would benefit from its telescopic handlebar riser.  Arctic Cat developed a hand-operated locking collar that gives the rider an easy option to raise or lower the handlebar up to 4-inches.  Another refinement is a 12V outlet, which is common on most four-stroke snowmobiles today, but lacking on most two-stroke models. It makes it a nice option to charge a GPS or cell phone while riding. 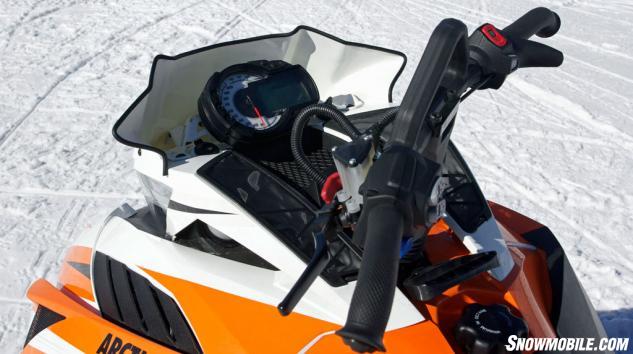 Cat engineers realized that XF High Country riders would benefit from its telescopic handlebar riser as they made the transition from trail to backcountry riding. Note the easy-to-read instrumentation cluster.

The XF High Country 800 is a great option for the consumer that is trying to balance trail versus mountain performance. Since it has a wider front end than a mountain sled, it will be much easier to ride the trails at high speeds. As well, the track is tall enough to get great traction in the backcountry and the telescoping handlebar will make a smooth transition from trail to backcountry.

Are you going to be faster than a trail-specific snowmobile with a XF High Country? In the corners is where trail snowmobile will out perform a XF High Country. However, in the straightaways it’s anybody’s game – especially with the high horsepower 800 HO engine. The best thing to do is to have a sit down with yourself and decide your riding style and where you want to be. If you desire to be in the backcountry with some trail performance, then the XF High County is a worthy consideration.