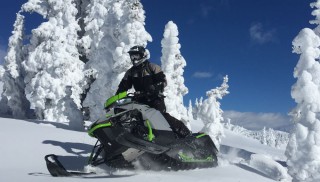 Early impressions and a comparison to the Mountain Cat

Arctic Cat calls the narrowed-in mountain chassis on the 2018 M8000 “Ascender” with Next-Gen bodywork that is 10% narrower than previous M8000s. This new chassis is not new, as far superstructure/frame, but the existing ProClimb with tightened, narrowed and smoothed side panels, lighter components, and narrower runningboards – all narrower than the 2017 Mountain Cat. It has an easy lift-off hood and a new cradle to hold the C-TEC2 800 twin. 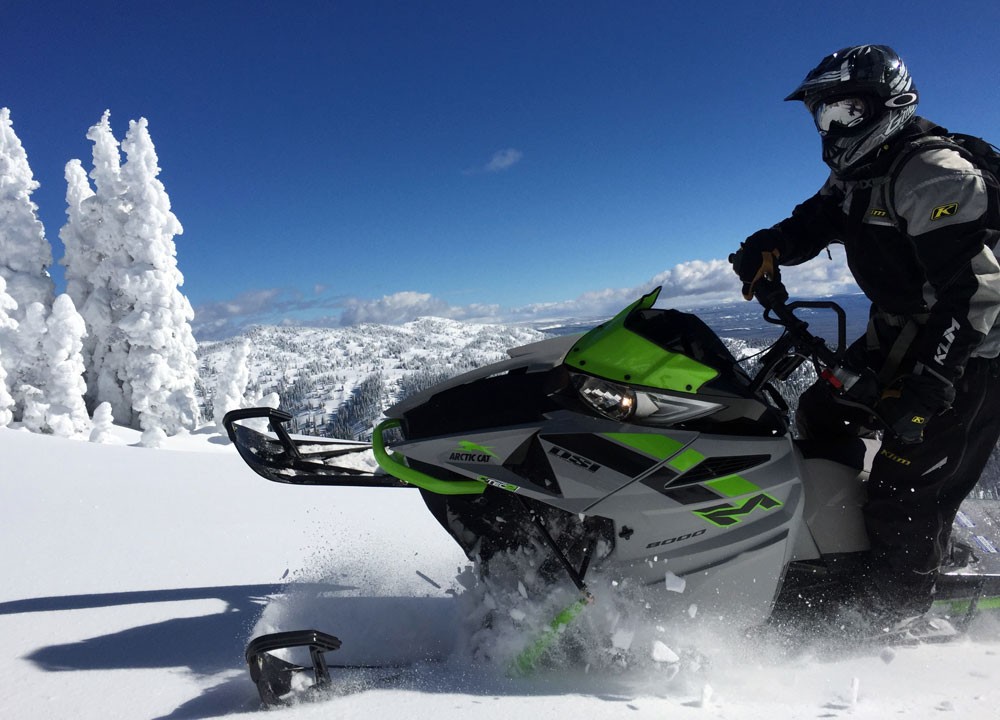 Predictability on edge, that is what our guest-test rider, Brent Burton documents about the Ascender chassis 2018 M8000 Sno Pro.

For those of you who may be investigating new model mountain snowmobiles for season-2018, this new Arctic Cat M8000 Sno Pro is fast becoming stellar, and is worthy of some reading time.

Arctic Cat did well in launching this early release and dropping it into the hands of several dealers, backcountry artists like Rob Kincaid, David McClure and the media, such as us cowboys in the Snowmobile.com high-mountain saloon.

As we attended Arctic Cat’s media event at its Island Park, Idaho test and research-and-development center, Cat’s mountain snowmobile pros gave us the reveal. Without diving into all the calculus figures, the 2018 Sno Pro is narrower than the Mountain Cat from 2017, and too, narrower than Polaris’ AXYS Pro-RMK. So, panels smoothed and cinched in, and toe-holds opened-up and pushed forward. 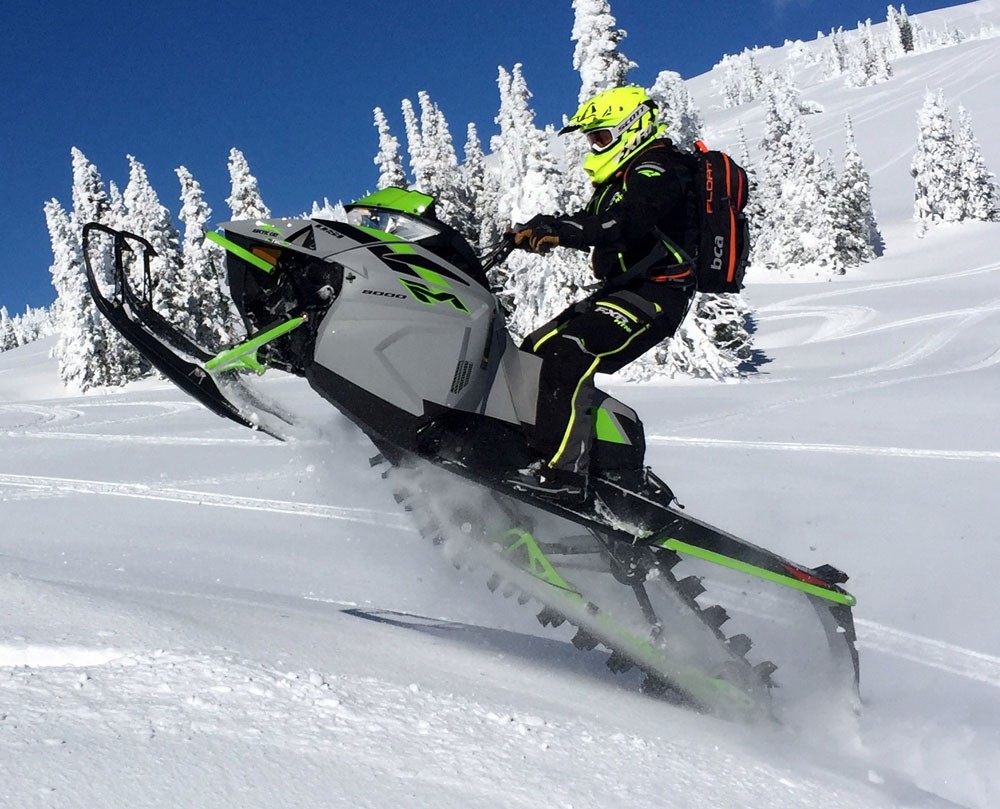 The flush and lower side panels are now tucked in behind the spindles. This means, in partnership with the narrower boards, the 2018 M8000 will not “panel out” like the 2017 M8000s. Back to the 2017 Mountain Cat, the 2018 Arctic Cat M8000 Sno Pro, in our simplest terms, is a cinched-in, narrowed-up, clipped at-the-runninngboards, Mountain Cat with new C-TEC2 800 power.  The 2018 has the 2017 Mountain Cat dropped and rolled chaincase, which gives the 2018 a sweet approach angle to the snow. 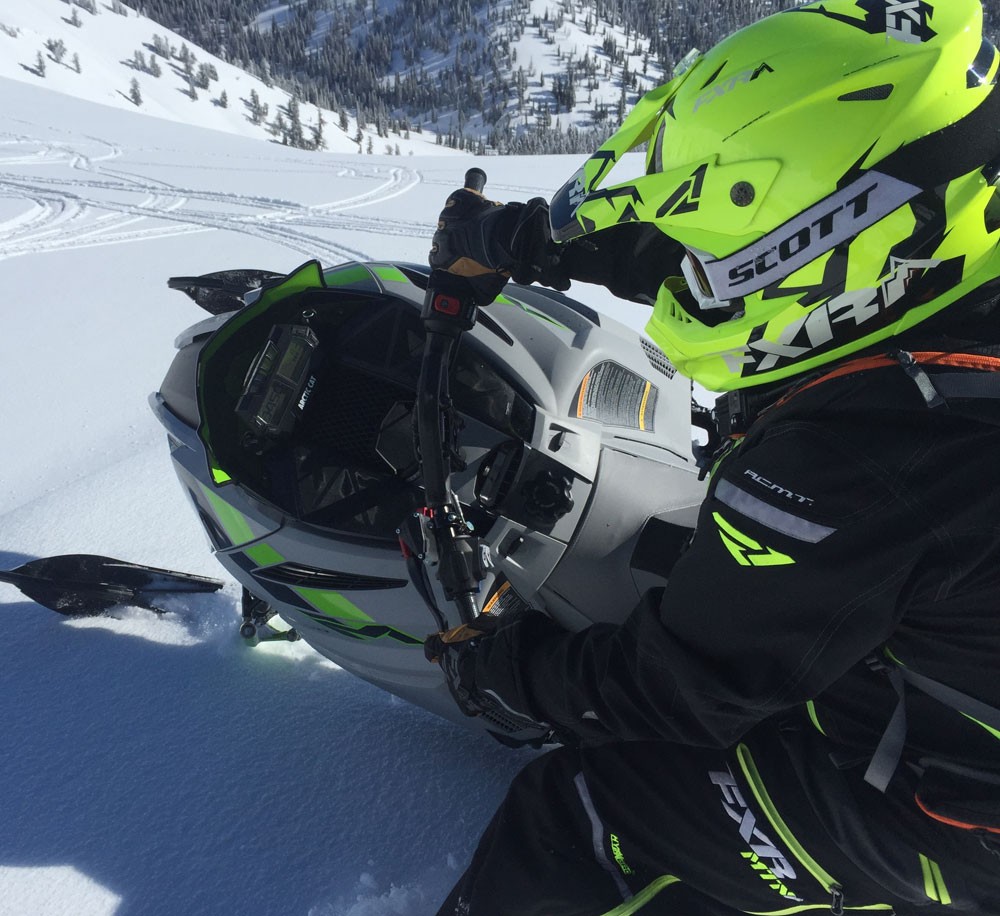 In this view, one can glance down and see the narrow smooth lines the 2018 M8000 brings to the faithful mountain rider.

What more? Well, it is lighter as well, by about 13 pounds through a lighter fuel tank, thinner aluminum walls on the tunnel, and lighter crossover jackshaft and front track driver axle. Arctic Cat is moving in the right direction, downward in weight, and hopefully upward in sales.

There is more. The new M8000 has a lifted bellypan that is smoother with a gentle angle than the existing ProClimb M8000. This means the 2018 will glide up over snow walls and belly-deep powder.

Other niceties include quick hood and panel latch locks, similar, somewhat, to the latches on the AXYS Pro-RMK. Gone are those pesky ’70 Dodge Challenger hood pins. Also, the hood comes off with one twist each from a roll-down hatch latch, and one screw. Voila. 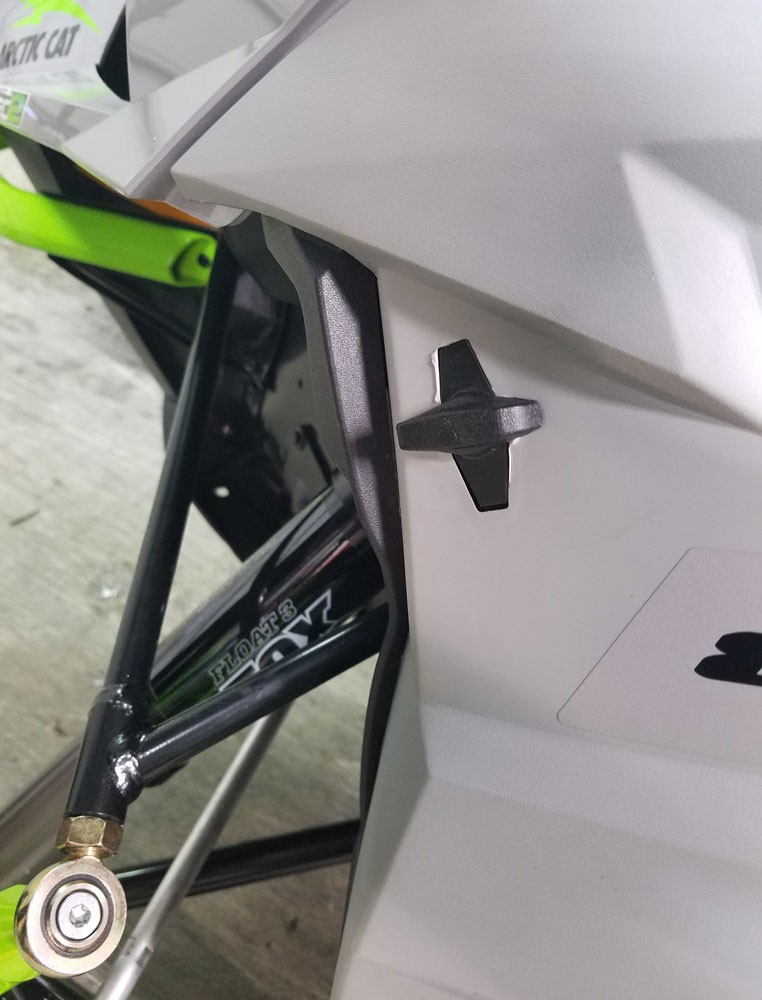 Removing the panels has never been easier on an Arctic Cat.

Here are some words from one of our experienced guest-test riders, Brent Burton:

“From my perspective, Arctic Cat answers the mail with the 2018 M8000 Sno Pro. The primary three things I look for in a great performing fun-to-ride mountain sled are 1) predictability on edge, 2) how nimble or responsive the chassis is, and 3) power with economy. The 2018 M8000 shines in these three areas. The comparison sleds we had on this evaluation are no slouches, a 2017 Arctic Cat Mountain Cat 162 and a 2017 Polaris Axys Pro-RMK in 174-inch track length. Due to warmer-than-normal temperatures, snow conditions were not ideal, but we did find some soft stuff on the north slopes, but overall more like spring snow than winter powder.

“In my book, the biggest strength of the 2018 M8000 Sno Pro has is predictability on edge. The sled holds a very clean line with little rider input – input required to keep the M8000 slicing across a steep slope. The skinnied up panels not only look more appealing, but keep any paneling or body drag to a minimum.  The sled is designed very well from the perspective of someone who likes to sidehill, and the predictability translates into confidence to ride the sled across steep timbered slopes without having to worry about what the sled might or might not do…you just know. 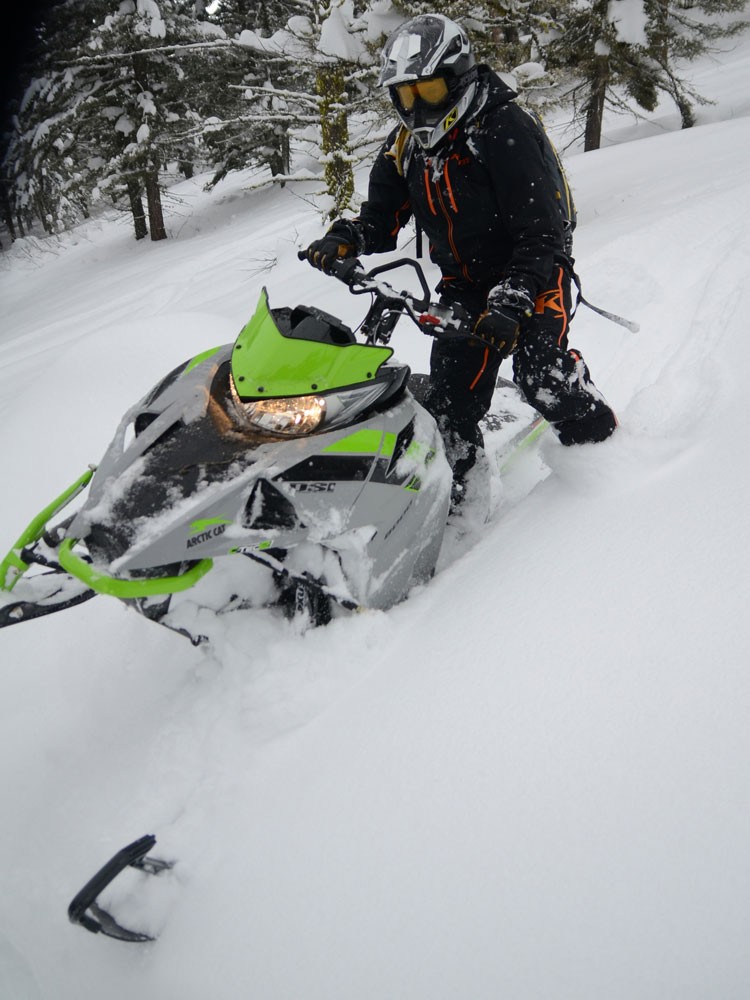 “The chassis is extremely nimble. I weigh in at just over 200 pounds and it really only requires a bit of weight transfer to the applicable running board and the Sno Pro is on edge. Compared to the AXYS, the balance point is a bit lower on the cat. The advantage this gives is the sled finds its the sweet spot a bit quicker than the Polaris, thus making transitions quicker. The sweet spot on edge is wide and not a lot of rider effort is required to hold a line. More and more the new chassis mountain snowmobiles, including this 2018 Sno Pro, will support sidehilling on some fairly steep terrain, with feet on opposite running boards rather than the wrong-foot forward technique that was required with previous generation mountain sleds.

“The Arctic Cat C-TEC2 engine performs very well. Compared to the prior Suzuki H.O. 800, the motor offers better throttle response and a bit stronger pull on the bottom-end and at mid-range; an overall smoother feel that translates to the entire drive train feeling smoother. The engine idled and ran flawlessly and appears to be a great upgrade over the existing Suzuki motor. It does not shake the bars like the Suzuki.

“I’ve been a fan of the Polaris AXYS panels. The 2018 M8000’s panels are equally or even better designed, and not only take inches off the girth of the sled, but can be removed in a matter of seconds, making access much easier than the prior generation ProClimb sleds.

“From a comparison perspective, ‘Is the 2018 fundamentally better than 2017 Mountain Cat?’ My honest answer to that is they are very similar. However, there are some notable improvements with the reworked plastics and motor that just make the sled work better than the prior generation M8000s, and this translates into an improved Cat that is on par with any mountain snowmobile on the snow.“

“Throughout the winter, I’ve been quite impressed with our Mountain Cat; a very impressive deep snow going snowmobile. Recently Arctic Cat gave us a glimpse into 2018 with its early release M8000 Sno Pro. No question Arctic Cat is raising the bar on itself. The early release M8000 is good looking, has an all-new motor, which boasts added torque and overall performance improvement. The domestic-built C-TEC2 800 is a much cleaner burning motor than the Suzuki.  However, the Suzuki-built 800 H O had an outstanding record for performance and durability.

“On the 2018 M8000 Sno Pro, a new hood and side panels standout which gives it a much cleaner and refreshing look. Not to mention, it makes the M8000 much narrower than its predecessor. 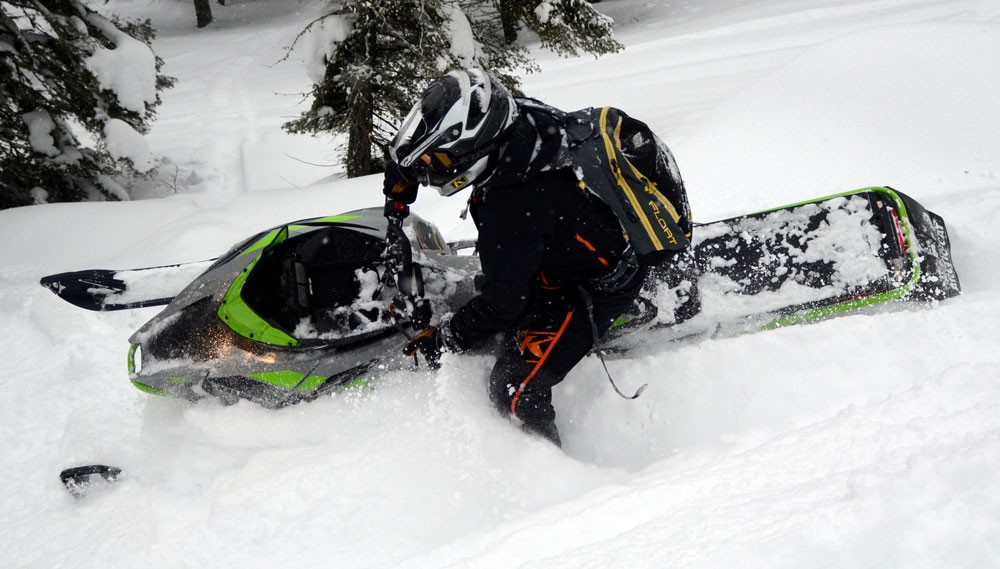 “We were able to put the 2018 M8000 up against our 2017 Mountain Cat. But, before I give my rider impressions, I need to point out our 2017 Mountain Cat has a 162-inch long PowerClaw track, whereas our 2018 M8000 spun a 153-inch long PowerClaw; so not totally an apples-to-apples comparison. But without question, I was impressed with the new Arctic Cat-built power. On the motor’s bottom-end hard grunt RPM side, it was user friendly. Now I don’t want to be misleading here and represent this was an  in-your-face power difference over the Suzuki, but the improvements in low- and mid-range pull were not subtle, but were noticeable for the new C-TEC2 motor.

“Overall feeling of this sled is much lighter and rightfully so, it is lighter, especially over the front end. A recent thaw robbed us of our deep-powder, that which we had the previous weekend, what we found in the trees, though, allowed us to put the narrower side panels to the test. Simply from the test: Nice job Arctic Cat. We nixed the term paneling out, it was virtually gone with this new design. The 2017 Mountain Cat sidehills great, but the 2018 is even better. Globally, I am very impressed with the positive changes the 2018 M8000 gives to mountain riding on a Cat.

“One last piece of gee­­-this-is-nice, the new Team roller driven clutch was sweet in its engagement, and in its upshift after a full downshift drop; engagement so smooth.

Is the new motor an 850 killer, and AXYS Pro-RMK stomper? We do not know. What we do know is this, its performance is linear – it clicks off the RPMs in rapid fashion. From seat-of-the-pants, it will go toe-to-toe and hit-for-hit with the Summit and Pro-RMK. Furthermore, we believe Arctic Cat is making way for these 2018s to be lighter still. We’ll write more in the coming weeks. 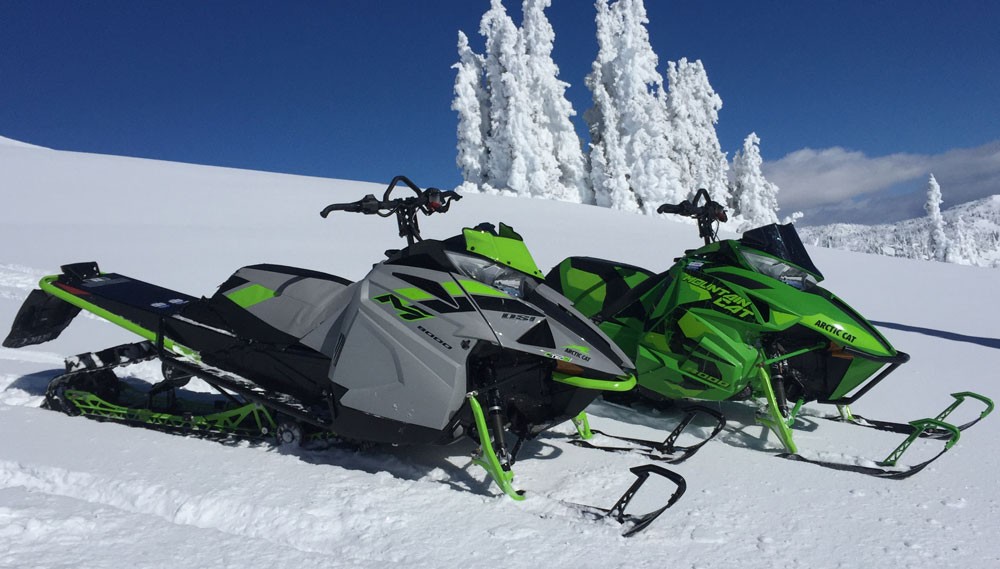 Testing the 2018 M8000 Sno Pro next to the 2017 Mountain Cat shows Arctic Cat’s evolution in the mountain snowmobile segment.

For us, Arctic Cat’s C-TEC2 performance is robust in the bottom and mid-range RPMs – that is noticeable. It is at this power curve, riders pedal along when tree running. The C-TEC2 is sassy on the bottom, but shares the same H.O. Suzuki-style power at the top. But we stress, low end throttle response is crisp. (We feel this motor will like a single tuner pipe and lightweight exhaust can.)

The Team primary and secondary clutches harness the motor’s horsepower and torque with ease. The roller secondary keeps belt temps down on its low gear squeeze, which too helps assure the track receives that fast throttle response from the motor.

The 2017 Mountain Cat is an awesome green snowmobile; underappreciated for 2017. However, this new M8000 line from Cat will redeem the 2017 MC and will carve new lines and a new history – hopefully a good history.