Is Polaris setting out to make “long” and “flickable” synonymous?

Way back when, the weight wars began with Arctic Cat and its 1M 900 followed by Cat’s M7. Then Ski-Doo threw in a much lightened REV, the XP Summit X, followed by Polaris really laying the hammer down with its Pro Ride Pro-RMK 155 with belt drive.

On the other end of the spectrum, Yamaha moved to four- and three-cylinder four-stroke motors with displacements of 998cc and 1049cc

Now Yamaha and Arctic Cat share a 998cc Yamaha four-stroke three cylinder motor with factory installed turbocharger. We doubt, but could be proven wrong, Ski-Doo and Polaris will challenge this.

Polaris was not going to release a 174 just because Ski-Doo did. Polaris waited, making the conscience effort to release a 174 when all tests, engineering and design specifications first satisfied Polaris’ most critical customers, its own mountain design team (who are hard mountain riders themselves) and its core of backcountry artists, Dan Adams, Chris Burandt, Cole Willford and Matt Entz, to name a few of the most popular. However, Polaris did feel the squeeze when Ski-Doo released its 174 XM Summit X. Still, Polaris stayed the course, holding off on its 174 release until it knew it was dialed in.

Polaris’ goals with the 174 are to give deep powder fans more choices. The 155 Pro-RMK is the snowmobile Polaris sells most (it is also the most-often purchased snowmobile by all snowmobilers). The 163 has been Polaris’ super-deep-snow go-getter for many years. Now, the 163 Pro falls in the middle among the AXYS Pro-RMK line.

All AXYS Pro-RMK mountain snowmobiles that use the Series 7.0 mountain track, which is a 15-inch wide track with three-inch tall paddles, relies on two gears and a chain to spin the track drivers. Any Pro-RMK with the Series 6.0 paddle track, a track that is 15 inches wide with 2.6-inch paddles, uses the Quick Drive Low Inertia belt drive system.

The 174 Pro-RMK LE comes built with one track only, the Series 7.0. No option exists for the 174 to muster along on a Series 6.0 track with belt drive. We understand this philosophy. But, as we have discussed amongst ourselves, we believe Polaris should trust its customers and let them have a choice: Series 6.0 or Series 7.0, but to keep manufacturing costs down, keep the chaincase system for the 174. We feel drivers may want to have the fast spinning 2.6-incher and give the 174 permission to be a very early winter or late fall snowmobile, and a spring-time vehicle. 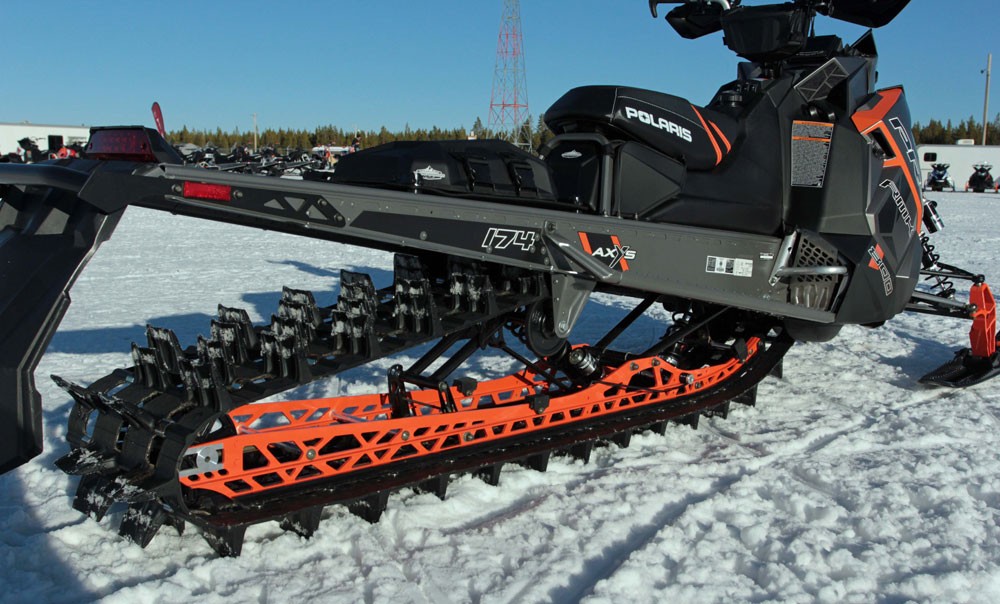 With one track option, the Series 7.0, the 174 LE will float and climb. The rear suspension is also purpose-designed and built for this application.

The 174 RMK LE chaincase has a 12 percent lower gear ratio to help the Series 7.0 track spin at its optimum. However, and take note, its final drive, when at peak rpm, is the same as the AXYS Pro-RMK 163. Nice.

Start with the 163 with Series 7.0 track. Between the two, rider ergos are the same, as well as the front end. The two share the same drive train – motor, clutches and chaincase.

How the two are different is that the 174 has more traction – lift – due to a longer track and rail. The two have the same balance (agility, nimbleness) that is achieved by a different rear suspension design for the 174 LE. The 174 LE has unique rear suspension front- and rear-torque arm mounting locations to control pitch and to maintain the known AXYS Pro-RMK feel. 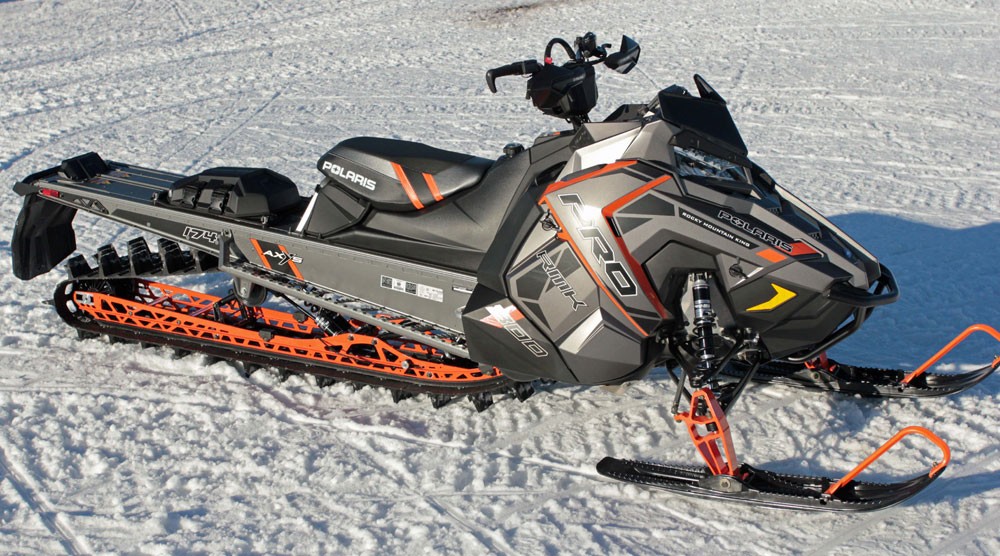 It may be long, but its feels 163-long. The 174 LE is purpose-built for bottomless snow days, but its DNA is AXYS Pro-RMK.

The 174 is for a couple customers. For those who want ultimate lift and to stay on top in deep snow, and to travel farther on the deepest powder days.

The 174 LE is also for the Clydesdale customer where he or she is weighty; the 174 with its extra length acts like a 155 or 163, depending on how many pizzas one carries on their waist. 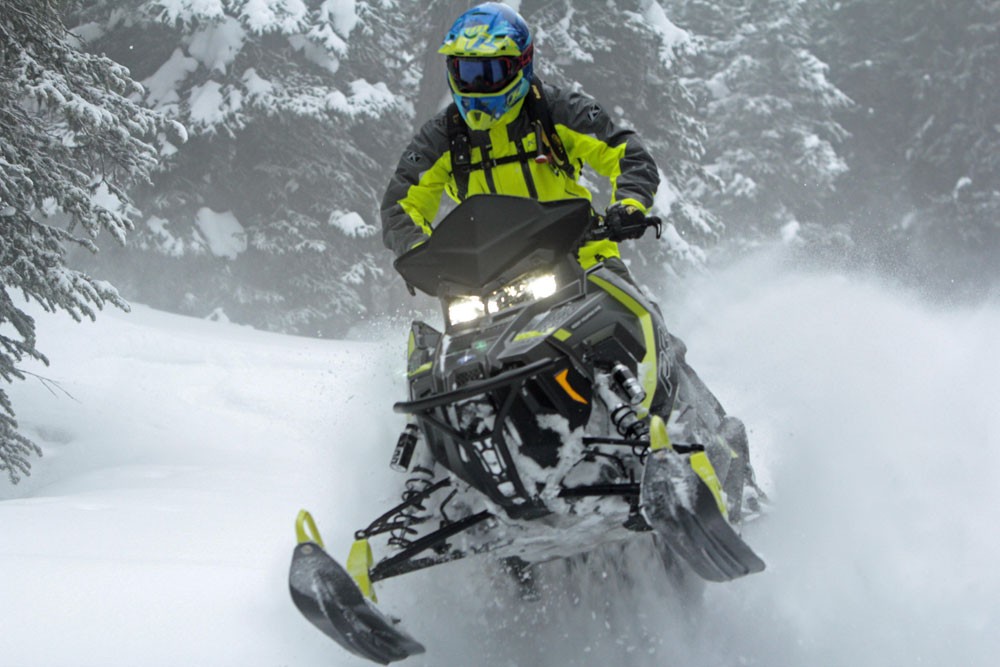 The 174 is a snowmobile that is long, but does not feel it has a track that is nine-inches longer than a 163. The 174 LE feels like a 163 in that it rolls right and left into a hillside as simply as the 163, but when pointing North, the 174 holds its nose mostly down throughout the steep ascent; ski pressure is almost always present. This is condition dependent, hard packed Spring-like snow will grant the 174 to lift its nose, but not like that of the 163 or 155.

When we hammered Ski-Doo’s XM Summit X 174, we noticed it felt much different than its sibling, the XM Summit X 163. It was planted, as expected. It rolled right and left with ease, and it held a sidehill. The XM 163 X when sidehilling would wash down or when throttled-up, would drive its nose up hill, both of which would break the driver’s sidehill line; the difference between yesteryear’s XM Summit X 163 and the 174 were noticeable, which we suspect is the reason why Ski-Doo did not release a GEN-4 REV Summit X 174 850 for this winter season.

Contrast the above between Polaris’ 163 Pro-RMK and 174 Pro-RMK where in our opinion and experience, both feel much the same, especially when sidehilling and changing direction to back track – turning uphill, changing body position from one runningboard to the opposite side. 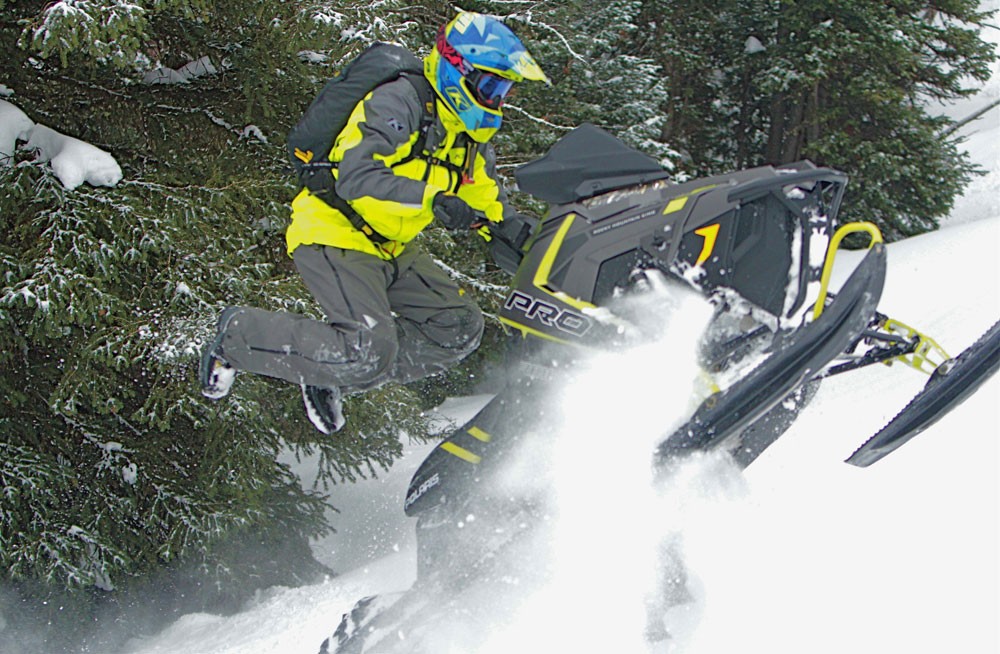 Also, when pinching the throttle for quick nose lift, the 174 will not stand up like the 163. It will mostly keep its skis on the snow in an ascent, allowing the driver to make a turn out or navigate between the trees while he/she makes the peak – all at low vehicle and track speeds. If speed has bled off, and centrifugal forces prevent the 174 from staying glued to the mountainside, the 174 driver simply needs to hop on the upside runningboard and pull the handlebars into the hill to compensate for the slower speed. Can all this be done effortlessly? Yes. Credit the AXYS chassis and the 174’s 163-like nimbleness.

The lightweight and rigid rear suspension is designed to control pitch by managing weight transfer – track torque from front to rear; the 174 maintains a gentle track approach angle to the snow. The rear rail design helps lift the rear skid, just enough, while driving the vehicle forward. 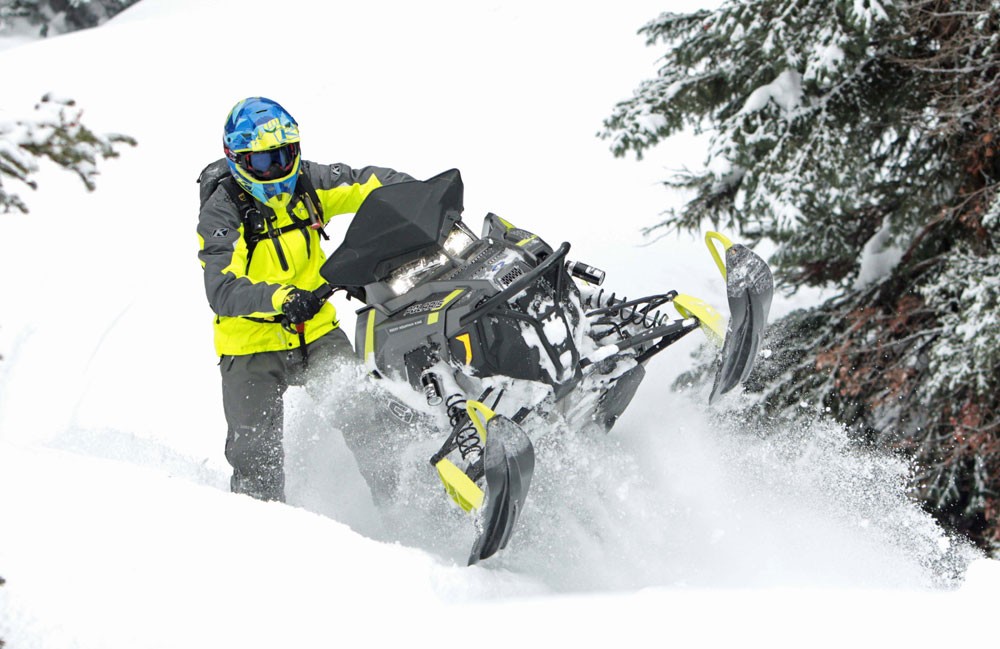 On those bottomless powder days, when flotation is needed, and low ground speed is also wanted, the 174 delivers.