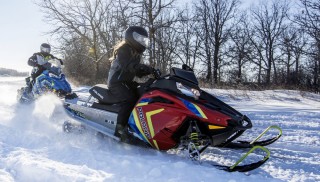 Today, Polaris stepped into the mid-sized snowmobile market – a market they are creating – by releasing to market a lowered and narrowed two-stroke, fan-cooled, trail snowmobile that blends 550 Indy-power into a new and unique chassis that is part Pro Ride, Rush, Indy and AXYS (sort of to declare). This new 2019 Polaris trail snowmobile is called the Polaris Indy EVO.

For Polaris, Indy is tradition, a legacy brand, and with EVO, Polaris takes tradition and pushes it into the future by creating a snowmobile will attract new riders – that hopefully will be Polaris’ future. 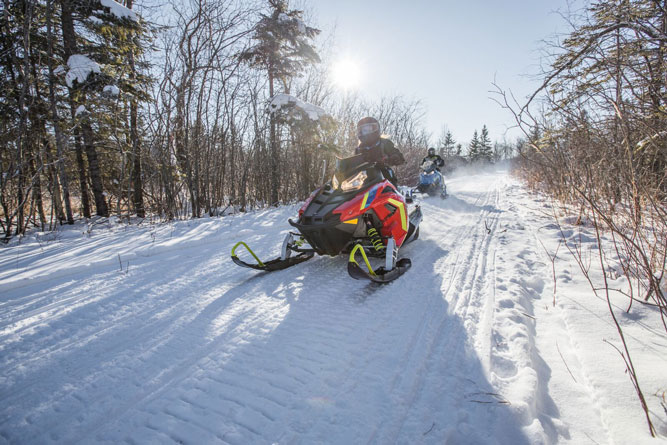 The Indy EVO has been designed for new riders.

The Indy EVO is not a “200” like the new 200 from Arctic Cat and Yamaha, but is a grown up snowmobile that is configured for smaller drivers, younger drivers, and those who want to dabble in the sport without dropping two years’ worth of coin, and without feeling intimidated. Think of the Indy EVO as the mid-sized pickup; it has all the capabilities and function of a full-sized pickup, but is only three-quarters the size.

Chris Wolf, President of Polaris Snowmobiles, said on a teleconference call Thursday, January 4, often times a consumer purchases a used or new-noncurrent snowmobile, believing the used or noncurrent model will be the “starter sled” they need to learn and experience the sport. Yet many times, the used or noncurrent snowmobile is not a perfect fit for their skill-set, body height, stature, or age. Basically, if a modelyear 2016 600- or 800-class snowmobile was not right in 2016, why would it be in 2018?

The EVO is powered by a 550 c.c. fan cooled motor that is limited to a maximum speed of 50 m.p.h. The carburetor-equipped motor – not electronic fuel injected – can be mapped to run up to 70 m.p.h. with a stage-tuning kit, which only a certified Polaris dealer can install.

The EVO has its own unique ski, also labeled EVO, prevents darting, provides effortless steering while still delivering purposeful directional control. The 121-inch long track is called “Shockwave,” and has a lug height of .91-inches. 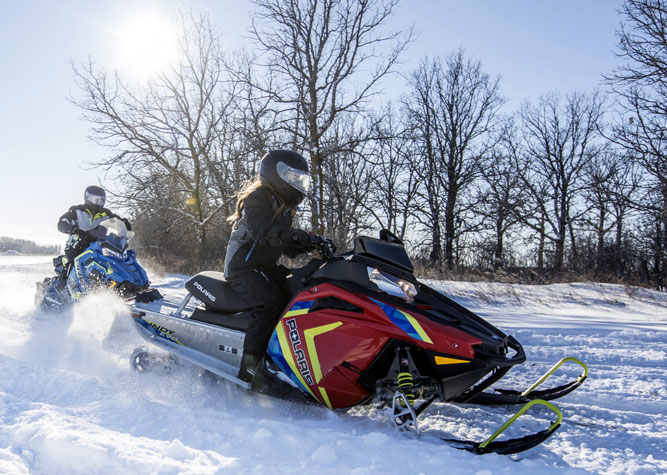 The Indy EVO offers features that are uniquely designed for new riders.

The front suspension is a lowered Pro-Ride, and the rear suspension is the robust Indy skid. When sitting next to an AXYS Pro S, the EVO appears ready to rip some laps on an ice course. Its lowered and slammed stance gives the Indy EVO an aggressive look, but know, the EVO is a mentor snowmobile, giving advice to the new trail rider. Polaris believes, if a newcomer can get hooked on an EVO, then (the wish and goal from Polaris) the new Polaris aficionado, will migrate to a full-sized trail snowmobile and stay in the sport.

The EVO’s cockpit (ergonomics) is narrow and compact. Specifically, the narrow handlebars, narrow seat, and low handlebar post are meant to inspire confidence. Though it appears mid-sized, the EVO, according to Polaris, will deliver full-sized fun.

Two models are available, the Indy EVO ($5299 USD; $6499 CAN) and Indy EVO ES, ES for electric start ($5699 USD; $6999 CAN). At these prices, Polaris introduces a fun and attractive learner’s snowmobile that is approximately $2,000 less than other smaller-class snowmobiles – equal in motor size and purpose.

Polaris did not skimp on styling and fashion. The Indy EVO has bold colors, red with yellow, and blue with lime green, that gives it appeal – it is not boring to the eyes. Furthermore, the EVO comes with PERC – Polaris Electronic Reverse Control – and a 10-gallon fuel tank.

The Indy EVO will be a 2019 model, no early releases will be made available to the public to purchase. However, Polaris, according to Wolf, will build a limited number of which select dealers in large snowmobile-population areas, will have the opportunity to demo it to customers and potential buyers.

In the mid-1990s, Polaris released several cross-country race-style snowmobiles called the XCR. These had Polaris’ XTRA-10 long-travel rear suspension, and race-proven IFS — independent front suspension — with trailing arms. One such XCR was a fan-cooled 440, which against the backdrop of Polaris’ other liquid-cooled XCRs — 440 and 600 XCR — was wildly popular. Why? Proven technology that the newcomer rider, or the young or small wanted. The 440 fan XCR had all the go-fast wizardry as the liquid 440 and 600, but relied on a tamed fan-cooled motor.

The budget-priced XCR grew Polaris’ XCR image and brought many new riders into the sport, where they remained and retained a loyalty to Polaris. The Indy EVO, as compact as it is, we believe, will do as the 440 fan XCR  did from nearly 25-years ago.

Go to Polaris’ website, polaris.com/en-us/snowmobiles.com, to learn more. We at Snowmobile.com will have a full evaluation report after we spend time on the EVO in late February.