Heading into model year 2015 we saw the XM Summit X, 146, 154 and 163 coming to market with few changes from 2014. We weren’t expecting much difference. Plus, the 2015 XM Summit X has a new in-house competitor where all the “big” news was going – the XM Summit X 163 and 174 with T3. These new T3 models spin three-inch tall paddles on the PowderMax 3 track. The tall-lugged T3 three-inch track retains its 16-inch width and FlexEdge technology.

With Ski-Doo giving birth to this new T3 Summit line, we fear the Summit X is a three-and-done nameplate; three model years beginning with year 2013. The XM Summit X laid the groundwork for the T3 Summit, which gives the buying public a solid and well-tested chassis. Could it be the snow gods will take their all-seeing eyes off the Summit X 146, 154 and 163? 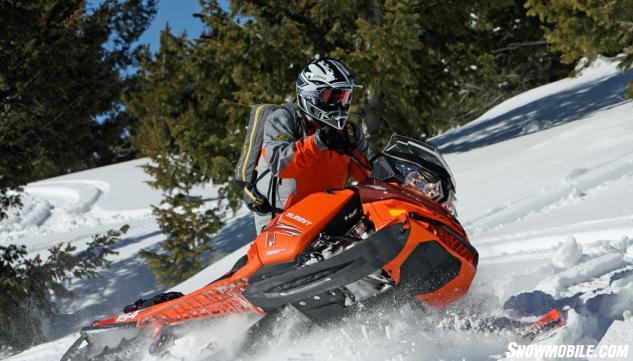 The Summit X sidehills really well until it crosses another track then the handling becomes nervous. This is more pronounced on steeper sidehills.

Though we don’t have specific tracking-and-trending data, Rocky Mountain-area Ski-Doo dealers we spoke to said most pre-ordered Summit Xs during Ski-Doo’s Spring-time push, were T3 Summits sporting the 163 track. Some reported 80 percent of the Summit Xs were T3s with the remaining 20 percent, the Summit X. If I were to purchase an X-package Summit, I too would pass over the 154 or 163 XM Summit X for the taller-lugged 163 Summit X T3. The only reason I would purchase a Summit X 154 or 163 would be price; the Summit X is cheaper.

But, since ego drives mountain riders to have the best, Ski-Doo has given deep-powder pushers, three 800 E-TEC XM Summits – the SP, the X and the X T3. Thus, many 800-powered XM Summits are available to fit your mountain riding needs – based on price. We believe buyers will settle into two ends of the same spectrum, the SP – the least costly XM Summit – or the high-end T3. Buyers, generally western-market buyers, fall into budget, budget-performance or premium-performance. The middle, budget-performance, is often forgotten.

The XM Summit X, be it 146, 154 or 163, should not be passed-over nor forgotten as a mountain killer. Just because its Powder Max 2 track has a lug height of 2.5 inches and its spindle is not the cool updated RAS spindle, the XM Summit X remains a stellar, high-end uber steep-and-deep mountain snowmobile. Ski-Doo has created serious competition within its own ranks. For model year 2015, the Summit X 154 and 163 do not so much compete against Polaris’ RMK Pro and Arctic Cat’s M8000 Sno Pro, as it does against its own mother-company product, the Summit X T3.

If we were Ski-Doo, we’d build a 154 Summit X T3 and let the fast spinning 154 three-inch paddle track speak loud and clear its mountain mayhem intent. But, that’s just us simple folk who ride weekend-in and weekend-out from November through April. 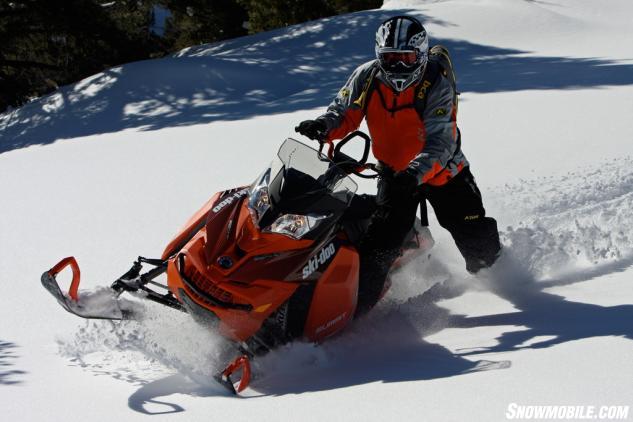 The E-TEC 800 engine has proven itself to be reliable, powerful, and efficient.

The XM Summit X receives its “mojo” from a twin-cylinder two-stroke motor known as the Rotax E-TEC 800R. This motor uses direct-injection and builds approximately 164 horsepower. From our experience, this is an economical motor with an easy throttle pull. Its power delivery is linear with virtually no smoke or smell and provides one-pull starts.

The front suspension has dual A-arms (upper and lower A-arms) with HPG shocks. Ski stance is adjustable from 35.7 to 37.4 inches. Skis are Pilot DS 2. The front end is coupled via a sway bar that can be quickly disconnected, hence the label, “Quick Disconnect.” We like this and frequently take advantage of quickly disconnecting the sway bar for more aggressive sidehill attacks. 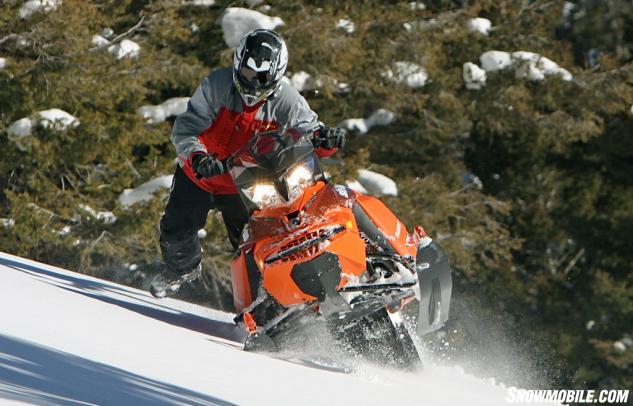 The Summit X has an easy disconnect sway bar that makes pulling a sidehill even easier.

The rear suspension is tMotion with HPG Plus shocks. The unique tMotion rear suspension has a ball joint hinge, residing between the rear arm, the drop link, and split flex points on the front arm, that allows it to swing two-degrees right or left, for a total of four degrees. This induces a controlled roll where more track footprint stays on the snow when sidehilling.

Secondly, the tMotion works in tandem with the Powder Max II track. The 16-inch wide track with 2.5-inch tall lugs has flexible edges. The track has – from center out, at a length of 12 inches – fiberglass reinforcing rods. With the center 12 inches reinforced, the track’s outer non-reinforced two-inches, flex up ever so slightly (to match the hill’s slope angle). This allows the track’s edges to flex up when a sidehill roll is initiated. The track with FlexEdge technology is 16 inches wide and come in lengths 146, 154 and 163.

For the small sprocket:

For the large sprocket:

The drive sprocket for all track lengths and the two altitude configurations uses an eight-tooth driver.

The S-36 package fitted to these sleds accommodates the tMotion rear suspension and track while the Pilot DS2 ski aggressively bites into a hill. 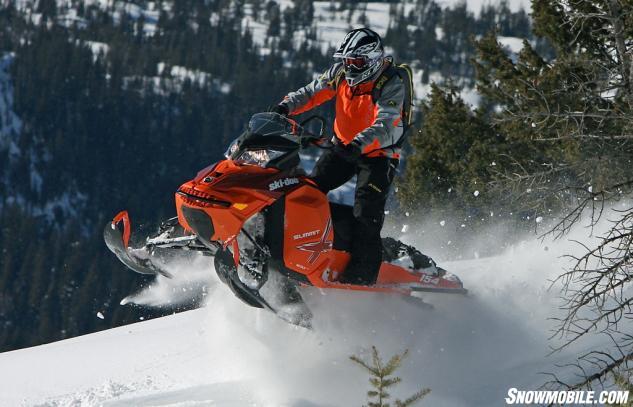 The Summit X feels light in the handlebars, which increases rider confidence.

Ergonomics are well laid out. The handlebars have a natural curve that allows the driver’s arms and wrists to retain a natural bend. Heat controls are located on the console. The controls that remain on the bars, RER and motor kill, are positioned or protected to prevent inadvertent activation.

The XM Summit X comes equipped with a multi-function digital/analog gauge that peers up to the rider – reflecting the fact that most mountain riders are in a standing position, The gauge reports all engine vitals and tracks altitude. We’ve come to appreciate its easy-to-read numbers and wide face.

Located behind the gauge is a glove/goggle box. We appreciate storage. To have a place to stuff an extra pair of gloves or goggles is much appreciated.

The seat is nicely sculptured with a tactile texture. It does not hinder most foot swings from one board to the next. But really, the XM Summit X can be masterfully ridden by keeping both feet planted on its respective platform. The seat does have some rear seat storage. Not much, but enough to appreciate. 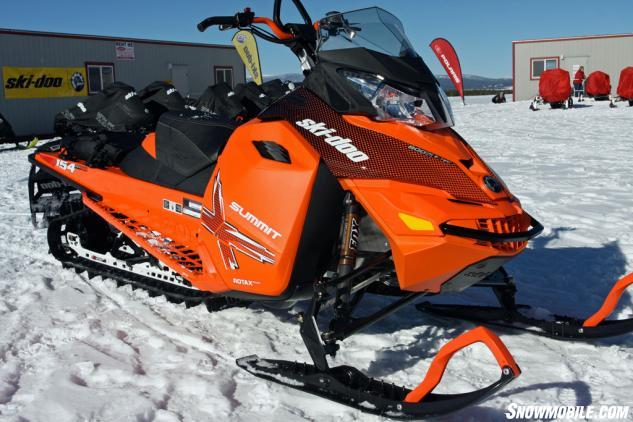 The Summit X has a great seat. It is relatively short and narrow, so your feet do not get hung up on the seat when repositioning from side to side. The seat also has a good texture that is grabs rather than slides off.

The painted tunnel prevents snow from flash freezing to it. Rigid footboards with wide evacuation holes dump snow and ice with ease. The tunnel can utilize Ski-Doo’s LinQ system as many optional storage devices can be added to the tunnel with ease.

In “Summation,” the XM Summit X is a satisfying mountain snowmobile. For 2015, Ski-Doo also offers Summit X versions for sea-level riders who want a long, lean, and mean trail machine that will give miles of comfort and mind-blowing off-trail meadow bashing in deep powder. A great accessory gear pack for those who want to pack just a little bit more on their snowmobile.

From our experience, the XM Summit is feathery light through the handlebars. For handlebar position, factory is best. We’ve learned the XM Summit X, when sidehilling through some previously laid down trenches or hard packed trenches, has some nose bounce and wants to dive down off the slope as impact energy kicks the bars down. This is not nearly as bad as the XP Summit of yore, but it is still present and can be a nuisance.

The XM Summit X can, on occasion, trench down through light and fluffy snow more than we like; the T3 Summit fixes this. Simply standing closer to the bars, or adjusting the limiter straps to control weight transfer through power-on situations can mitigate some of the effect. Every mountain snowmobile has quirks and this is one we find in the Summit X.