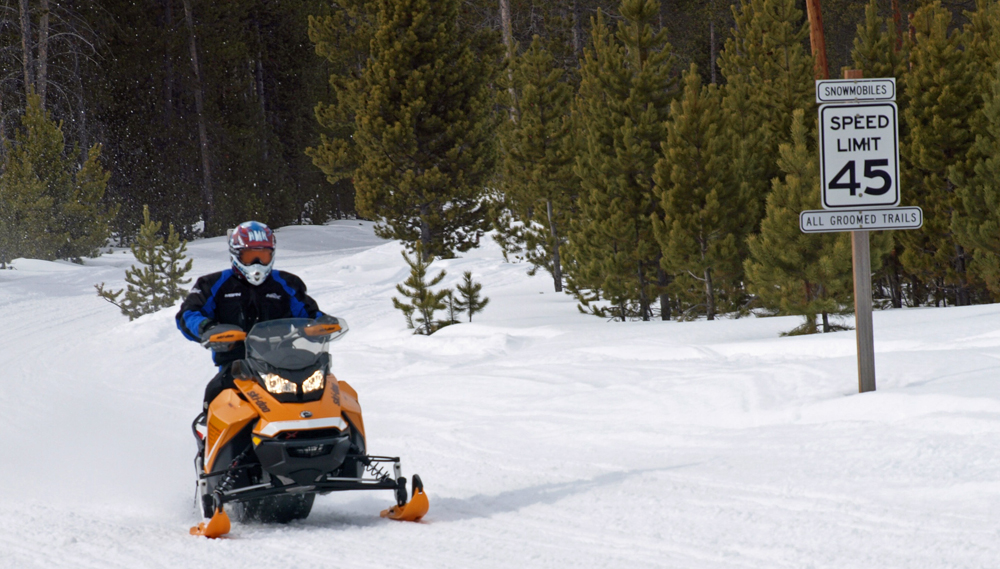 Decisions. Decisions. Which of the new 850cc powered Gen4 Ski-Doos should you get? The MXZ 850 with the 129-inch track or the Renegade with the slightly longer 137-inch Ripsaw? Power will be the same. And the sleds, except for length, are nearly identical.

Decisions. Decisions. When you come to that “T” in the trail what do you do? Do as the famous New York Yankee catcher Yogi Berra suggested when giving directions to his house in the country: “When you come to the T in the road, take it.” Of course, his house was on a circular loop and there was no right or wrong turn at the intersection. So it is with Ski-Doo’s 2017 Ski-Doo GEN4 models. There is no right or wrong choice, just different.

Ordinarily Ski-Doo’s Renegade series is looked upon as the company’s crossover unit with better off-trail performance and, perhaps, a slight downgrade in on-trail running. Not to worry, either of these sleds will handle whatever you want to do with them quite well. Since the switch over to the 129-inch track on selected MXZ models such as the MXZ 850, you get near Renegade off-trail capability. The Renegade specifications show an eight-inch longer 137-inch track, but in reality the track adds only about four-inches of on-snow grip. Compared to the old 121-inch tracks, yeah we’d say go for the Renegade if you do more off-trail runs. But today, we’re not so sure.

From riding both the new 850 MXZ X and Renegade X we’d be hard pressed to positively state that the slightly shorter MXZ 850 was less capable off trail and more capable on trail than the Renegade 850. They’re both exceptionally good.

When you lay into the throttle at mid-range, booster injectors open up for attention-getting dynamic response.

We’d get the Renegade 850 simply because we do feel that the added length of the slide suspension rails and added track length’s grip – slight though it may be – make the Renegade 850 a more versatile sled overall. Face it, in overall sled length we’re looking at 122 inches versus the 118-inch length of the MXZ 850. That’s four extra inches to fit on your trailer. Plus, it’s not like you’ll have trouble slipping the longer Renegade 850 around a tight corner, but you might get a better bite off trail and added bridging over some bumps.

Consider the length of the track and the overall sled length as the main difference between the 2017 Renegade 850 and its MXZ 850 sibling. The early buy option Renegade X 850 came outfitted with the same equipment as the MXZ X 850. Which, simply stated, was packed with value.

While the Renegade X 850 carries a proven rMotion rear suspension with longer rails, it also reflects a top quality shock package of HPG Plus aluminum bodied gas charged shock at the center and a high performance KYB Pro 36 EA rear arm shock to work the sled’s 10.6 inches of travel. The in-season Renegade 850, which retails for about US$850 less, features base HPG shocks center and rear on its rMotion unit. Up front both the X and the base Renegade 850s use the HPG Plus shocks. 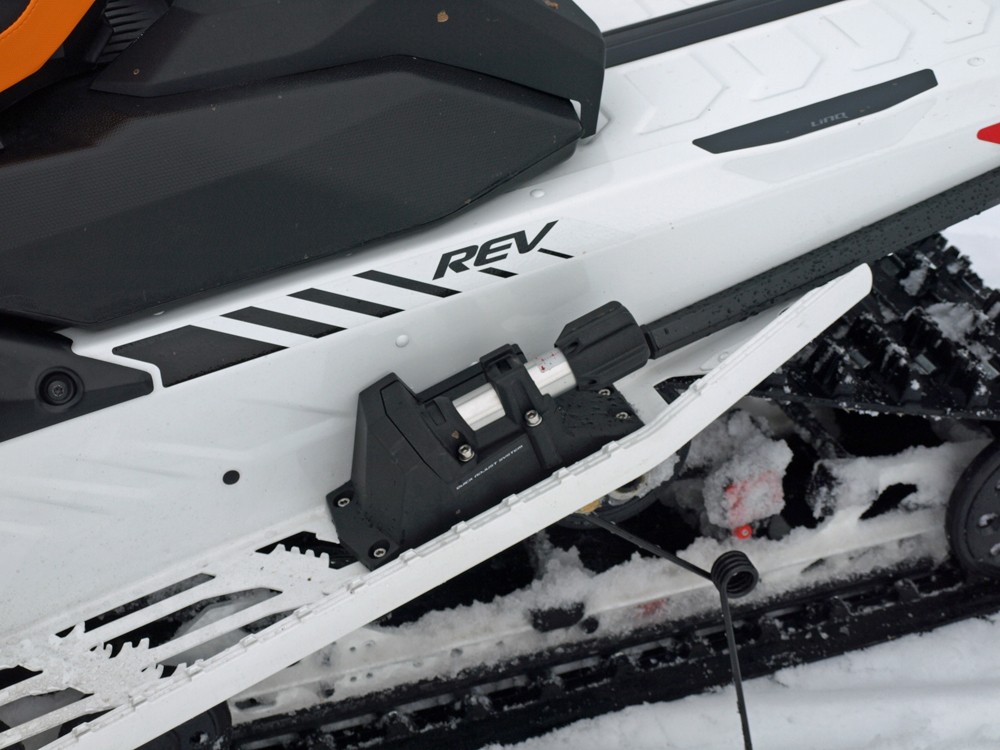 Ski-Doo’s innovative rMotion rear suspension had been tweaked to offer up to 10.6 inches of rear travel that can be easily controlled via an optional runningboard-mounted adjuster.

That GEN4 front reflects an upgrade to the newest RAS 3 design. This unit carries over a similar design and basic geometry from the RAS 2, but it is revised specifically to fit the new Generation 4 platform. While Ski-Doo engineers needed to make accommodations to the front suspension when working it into the new platform, they took the opportunity to add another inch of suspension travel to 9.17 inches and drop almost a pound in weight compared to the RAS 2.

As soon as you take your new Renegade X 850 out on the trail and come hot into the first corner, you’ll notice this new Renegade is more precise and easier to control. While much of that can be placed on the precision of the RAS 3 set up, you can thank Ski-Doo engineering for shrewdly narrowing and centering the entire powerpack, Ski-Doo’s term for the package of 850cc engine, clutches and key drivetrain components. The result is a 50/50 side-to-side weight distribution. You will feel the difference. 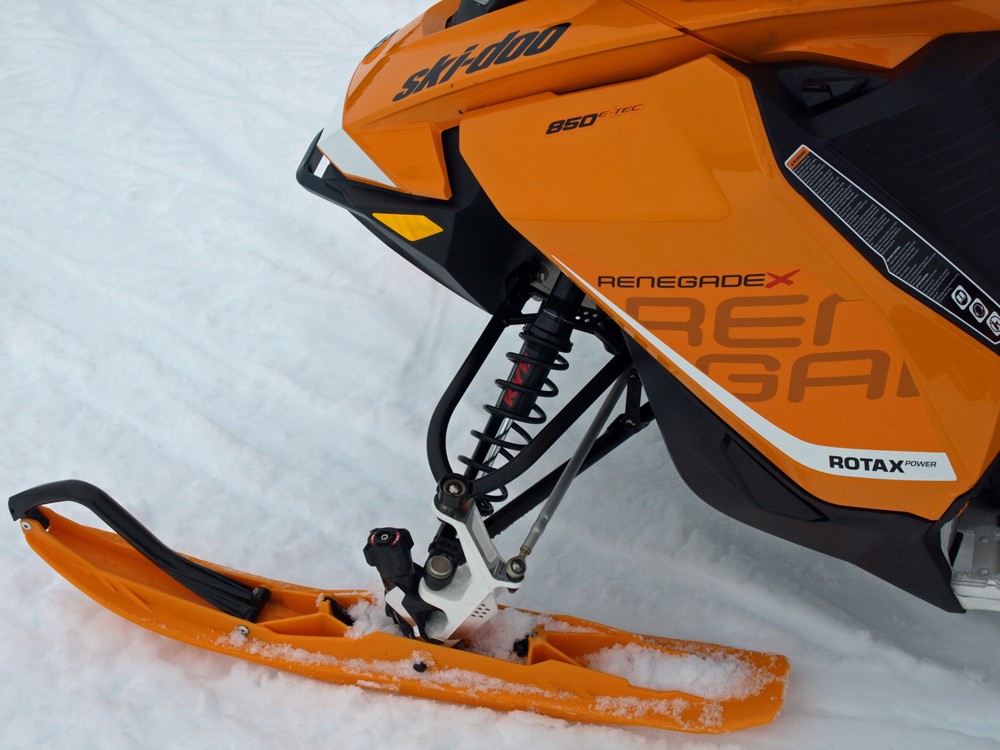 The new Renegade X 850 comes with the RAS 3 front suspension that adds another inch of suspension travel to 9.17 inches and drops almost a pound in weight compared to the RAS 2. The adjustable TS ski is optional.

Expect to feel the power of this new 850cc ETEC two-stroke twin as well. This fourth generations Ski-Doo REV platform engine reflects the second generation of E-Technology. Ski-Doo claims that this effort provides four key benefits: power, responsiveness, efficiency and durability. The engine is rated at 165 horsepower at 7900 revs; that’s up 10 horses over the 800 ETEC. The added responsiveness comes, logically, from increased power and torque, but also from a full on rethinking of throttle response. The second iteration of the ETEC direct injection reflects a complete redesign that includes more precise injectors, new throttle body design, higher performance engine control module (ECM) and the addition of booster injectors at the intake. You will definitely notice those when you slam the throttle in as they act like a mini-nitrous charge (okay, an exaggeration!) at mid to high rpm. They are intended to get your attention. Ski-Doo notes they are “designed for dynamic response.”

The new engine needed a tweaked drive system, so its gets its own version of the pDrive that was introduced on last season’s Ski-Doo MXZx 600RS terrain racer. The race sleds proved the new pDrive to be both more reliable and faster than previous designs. Our experience with the 2017 Renegade X indicated that on the performance end this should be true. We’ll accept Ski-Doo’s word on the reliability aspect. 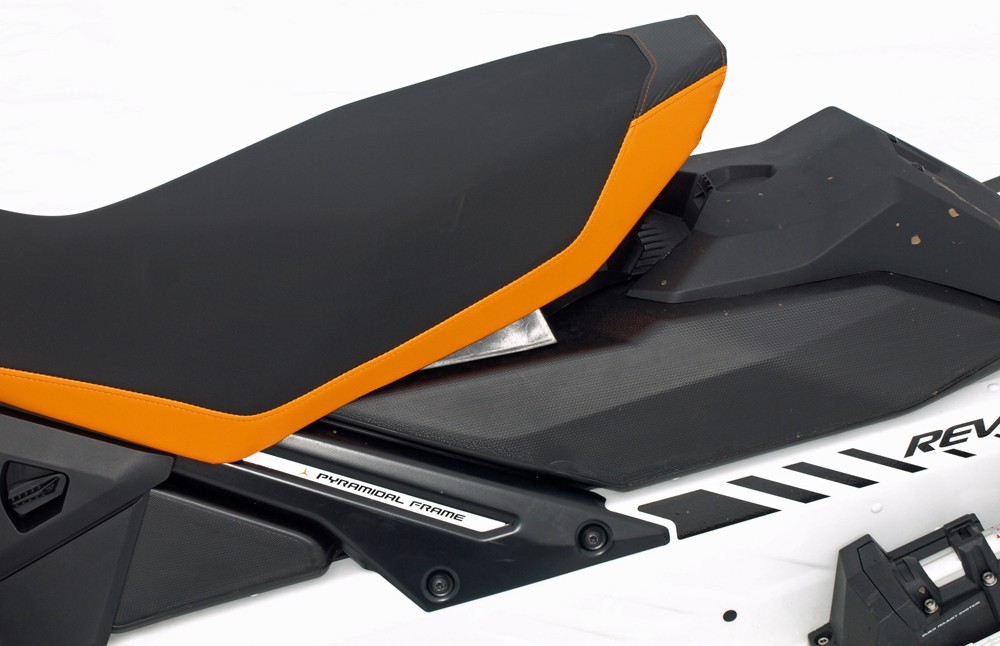 The Renegade X 850 combines the performance-styled handlebar with a trail performance saddle that features a narrow front and REV’s famous ride-forward positioning.

The best thing about the 2017 Renegade X 850 is that when you come to that T in the trail, you can feel free to go either direction. If one way looks smooth, the Renegade X 850 will give terrific on-trail stability backed up with excellent handling and power. If the other direction looks rutted out and ungroomed, take it. The reworked suspensions and the extra length give you ample prowess for any off-trail adventure.

Regardless of the direction your ride takes you, the GEN4 Renegade 850 X comes with excellent ergonomics. We especially embrace Ski-Doo’s innovative Forward Adjustable Riser (FAR) that lets you position yourself for aggressive cornering to kick back cruising and two settings in between. Combined with the performance-styled handlebar, a trail performance saddle with narrowed front and REV’s famous ride-forward positioning, this 2017 GEN4 platform rates as an all-star on or off trail.

Ski-Doo’s innovative Forward Adjustable Rider lets you position yourself for aggressive cornering to kick back cruising and two settings in between. It comes standard on X models, but is optional on in-season MXZ 850 and Renegade Adrenaline 850 models.

While we embrace Ski-Doo’s FAR adjustable rider set up, we are negative toward the Renegade X 850’s flat footrest, specifically due to the use of open foot holds and its rail-specific side panels that have open toe-holds. In fairness, while this set up is not a favorite with us, we suggest you try it first. Fortunately, if it makes you feel uncomfortable, you can order optional holds and foot guards through your dealer. This may be a simple issue of personal preference or getting used to a new way of riding. That’ll be up to you.

The 2017 Ski-Doo Renegade X 850 gave us ample pleasure during our test riding. The power delivery is strong with good transitioning from the 3600 rpm engagement up to its 7900 revs at top end. The booster kick is noteworthy as is the more predictable handling in corners. Style-wise, we like it as it gives the new GEN4 a very muscular and athletic look. Add in that optional LED light bar and handlebar guard light kit and this sled will be unmistakably aggressive coming down the trail – day or night!

Ski-Doo engineering worked hard to get its GEN4 project right. We think it achieved the mission as all of the 2017 GEN4 platform sleds we’ve ridden to date are memorable for all the right reasons. This sled works. Now the question will be, which one do you want to own?