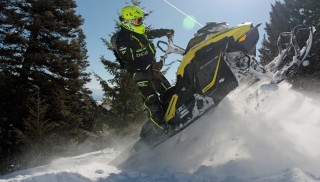 Is Ski-Doo making its in-season mountain muscle snowmobiles a spring-buy snowmobile in disguise?

To us the Ski-Doo Summit SP is the true darling in the GEN-4 REV Summit fleet. True, much hoopla was given to the Spring-buy “X,” but for all intents and purposes, it is the SP we gravitate to. Not that the X is lacking, for it is worthy of all its accolades, but the SP is a kid who comes off the bench all Rudy-like with its own style and it gets its work done. What is the SP? Basically an X that is readily available in-season, the SP 850 is 97% X. Most differences lie in runningboard material and shock package. 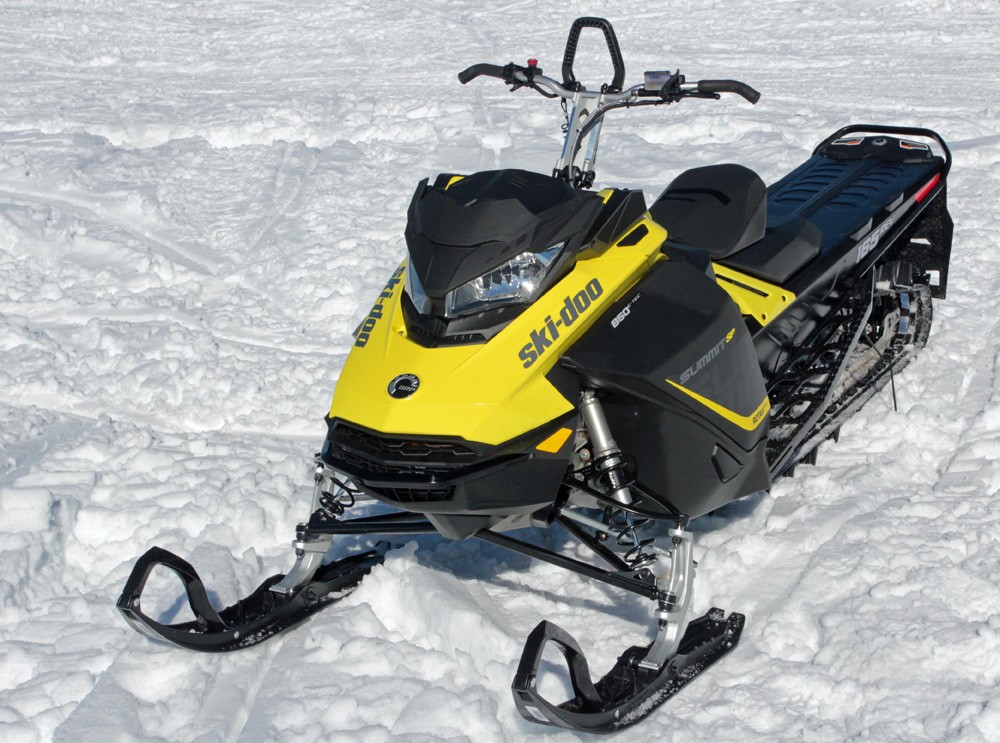 The SP is 97% X where most differences lie in runningboard material and shock package.

Anyway, back to reality.

When we rode the SP and X 850 Summits in British Columbia and on the peaks near West Yellowstone, MT, we did not notice any performance difference between the two. In years past, when we muscled an XP X or an XM X and then jumped to the SP model, the differences between the two were quickly noticed, most notably in the handlebars where the SP’s bars made it feel left-handed in a right-handed speed writing contest. But for the Gen-4 Summits, the gap between the X and SP is narrow. Given the two, for us, we’d throw a leg over the SP first, because its purchase price is less and – in our opinion – rolls out virtually the same performance. Sometimes, having an X-rated, LE-rated, or whatever super-hottie-rated snowmobile brings little return on investment when slapping a mountain’s face. Rider ability and skill greatly influence the face whacking. Spring-buy snowmobiles have some creature- and bling-advantages, but not much, if any, performance advantages. The SP Summit from Ski-Doo is an 850 Gen-4 that is brawny, muscular, agile, nimble, and dang good-looking. It is an in-season 850 Gen-4 Summit that will make any in-season purchaser proud.

The stamped-out grid-style runningboards are narrower than last’s years XM Summit SP, as well as the lower side panels being cinched in two inches. The SP’s footwells, like the X, are forward 2.6 inches from last year and are more open and spacious. The runningboards have a flatter angle, more than the other OEM’s mountain snowmobiles, which reduces rider fatigue at the knees, ankles and thighs. The foot boards are 0.75 in. higher, from ground level, than the 2016 Summit SP. 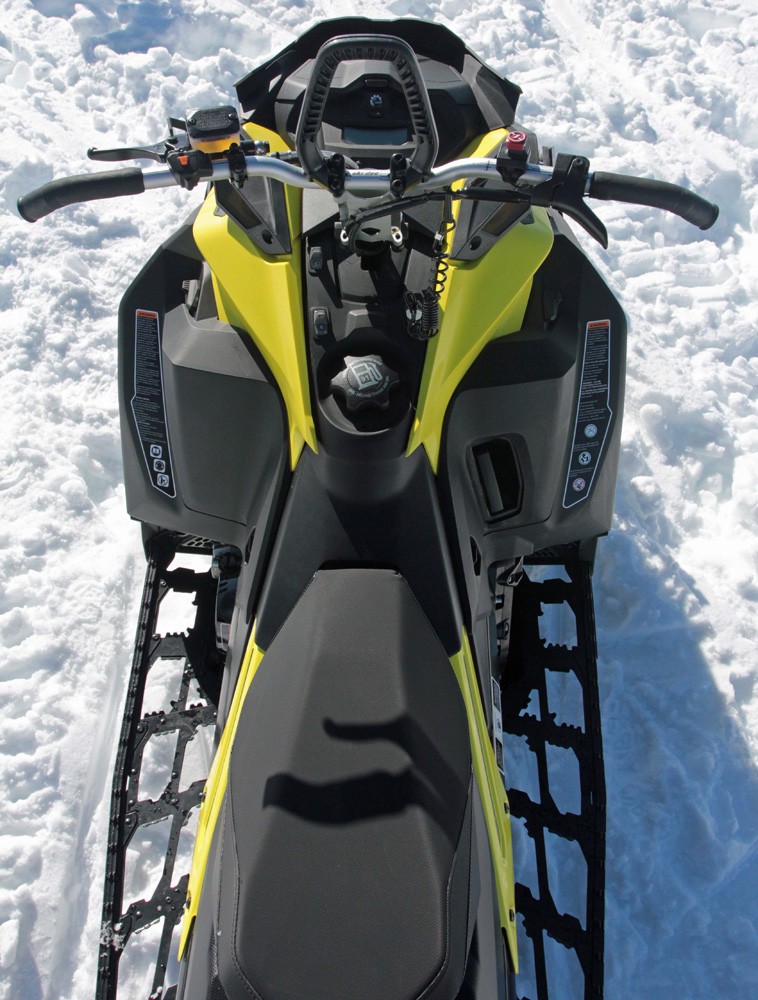 The SP’s footwells, like the X, are forward 2.6 inches from last year and are more open and spacious.

The Summit X and Summit SP share similar KYB-sourced high pressure gas shocks. The X features HPG Plus and the SP gets HPG that are also aluminum but not rebuildable. Ski-Doo claims, in an early media video, the cost to rebuild or to replace the KYB brand shocks is about the same. Since these HPG shocks are coil-over shocks, preload, rebound and dampening are in your control, within a certain boundary. We found the SP’s shocks to be highly capable shocks at managing mogul hit, quick trail chops, sidehill cuts and powder carves.

Runningboard platform holes on the SP are not as wide as the Summit’s X boards and the X’s boards are extruded whereas the SP’s are stamped. Extrusion is a process where material, in this case, aluminum, is pushed through a die with a desired cross-section pattern. This manufacturing process gives the builder the ability to create complex cross-sections and to work materials that are brittle; it also forms parts with an excellent surface finish.

With the SP, the boards are stamped, which is a process of placing a flat sheet metal into a stamping press where a tool and die forms the metal into a net shape. Stamping is usually done on cold metal sheets.

For the SP buyer, we don’t believe this is at a deal breaker. The SP’s runningboards are strong and its snow-dump holes, though not as wide as on the Summit X, are sufficient at dropping snow and ice. Oh, there will be times when you’ll notice snow and ice build-up, and when you do, stomp hard and push the frozen water down. For us this is a minor difference between the two models. 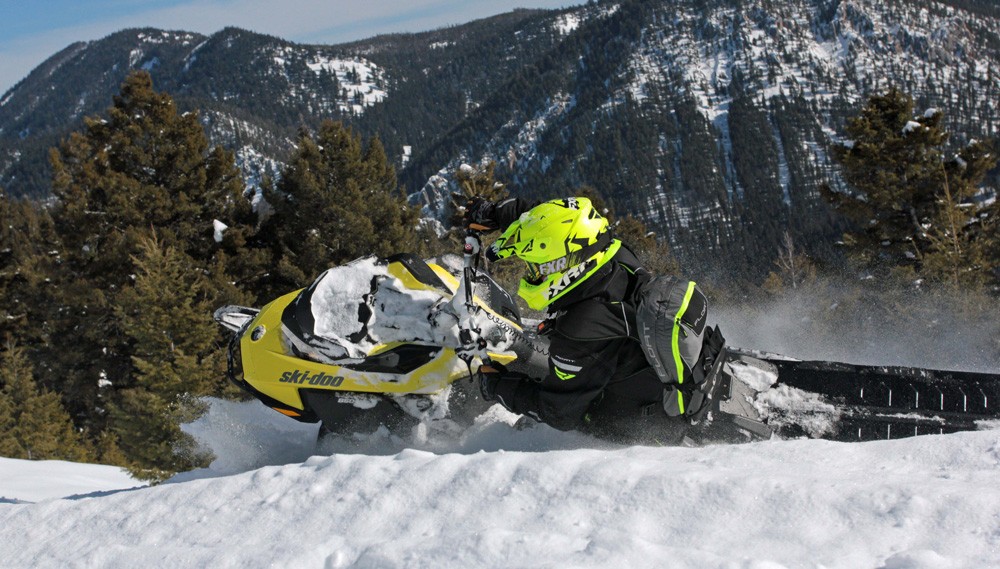 The handlebar, post, and handlebar controls between the two are identical. The difference being, the SP’s post is painted, the X’s retains the brushed aluminum look for that minimalist appearance. No function difference at all.

The Gen-4 REV Summit X Rotax 850 twin cylinder two-stroke builds 165 horsepower; 10 more than the 800R E-TEC. The 850 has 106.6 lb-ft of torque, 19% more than the 800R E-TEC. Achieving this peak horsepower and torque comes when 7900 RPM hits the clock. A new heat exchanger system keeps the narrow motor cool and prevents snow thaw from occurring at the tunnel’s end, thus creating an ice build-up on the runningboards. This prevents the vehicle from gaining weight.

The SP’s track is a PowderMax FlexEdge track, but it is a lighter 2.5-inch or three-inch paddle track from last year. For 2017, it is known as PowderMax Light. Track and chassis lengths for the 850 Summit SP are either 154 or 165. 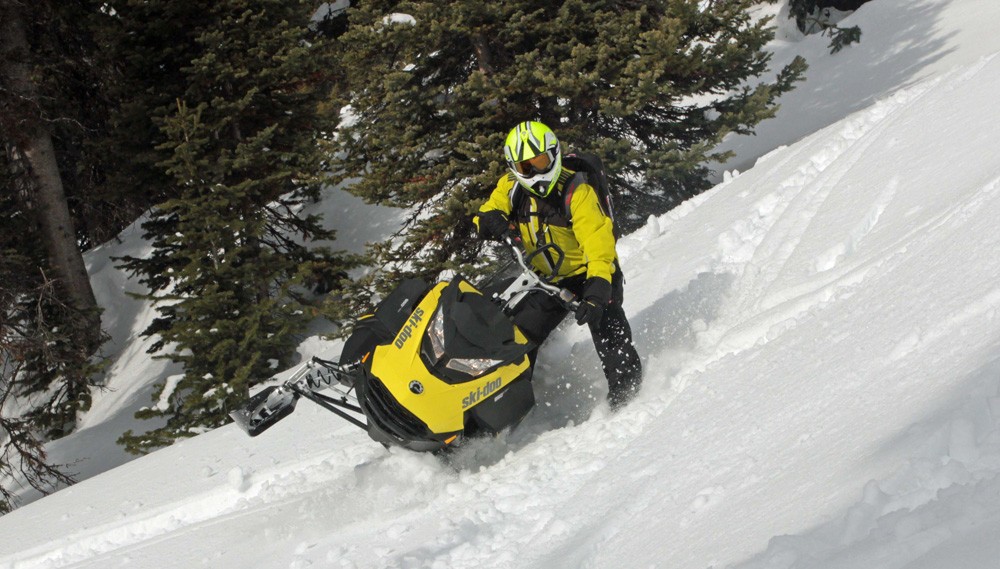 In making long sidehill cuts, you’ll learn to trust the SP and its GEN-4 chassis’ agility and nimbleness work for you.

The 850R has a smart RAVE system, called eRAVE, which is three-times faster and more intelligent than the 800R’s RAVE system

The primary pDrive clutch has clicker adjustments, friction free dual rollers that transfer engine torque rather than relying on traditional sliding buttons. The oversize rollers with needle bearings, wide flyweights and a shaft-on-shaft design reduces friction and inertia and being lighter than the 800R E-TEC’s drive clutch, requires less motor effort to spin. Overall, the pDrive is 3.7 pounds lighter than the clutch on the 800R Summit.

The 850 Summit SP has body side panels, as well as hugely-open and narrow running boards (as mentioned earlier), and an open tunnel cap that all give the GEN-4 REV Summit SP its deep snow maneuvering and sidehilling capabilities. Ski-Doo calls this “Powerdynamic.” The narrow body, beveled tunnel, tank, seat and handlebar controls are compact. Ski-Doo pulled in the REV Summit SP’s body by four inches, two inches on each side, and moved the front toe hold forward, rather opened it more toward the engine, by 2.6 inches. The lower side panels were elevated up half of an inch to minimize the pan’s surface from dragging the snow. 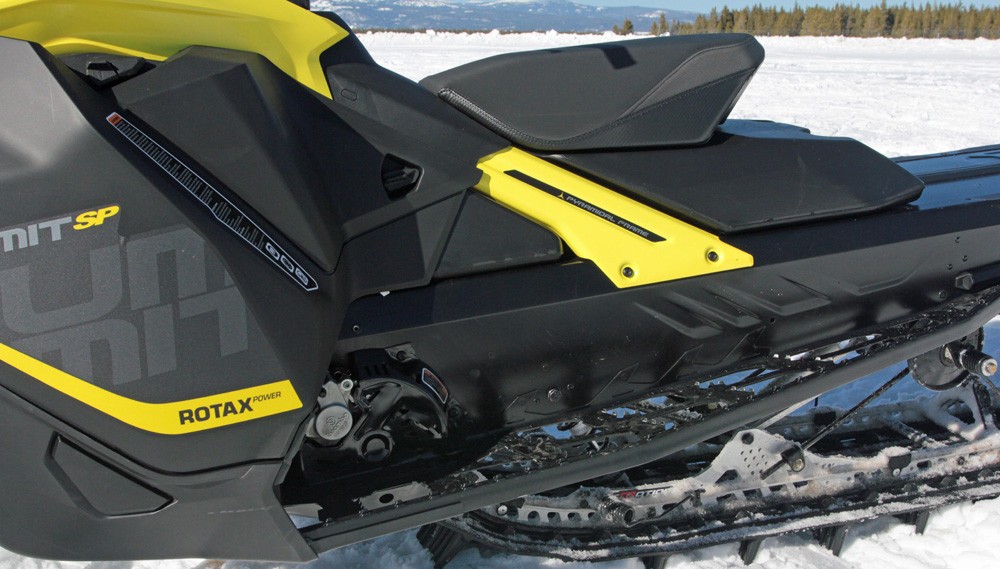 Ski-Doo pulled in the REV Summit SP’s body by four inches, two inches on each side, and moved the front toe hold forward.

Ski-Doo did make its in-season mountain muscle snowmobile a Spring-buy snowmobile in disguise. We feel you would agree with us that if you threw a leg over and spent some time on the SP; you’d feel it is the true darling GEN-4 REV Summit 850.

Team Mountain Snowmobile.com spent a day, May 07, 2016, with Ride Rasmussen Style, Bret Rasmussen, on some 2016 Summit Xs and a lone Gen-4 Summit X 850 165. Snow conditions for the Tony Grove area near Logan, Utah, was muddy at the trail head, wet sloppy “goomba” at mid-point up mountain, and wet sticky snow, albeit it deep, up top.

The 850 Summit X 165 came to us in fine fashion, better than we knew in British Columbia at its introduction ride and at a week’s long evaluation on the mountains near West Yellowstone, MT, in late February to early March. 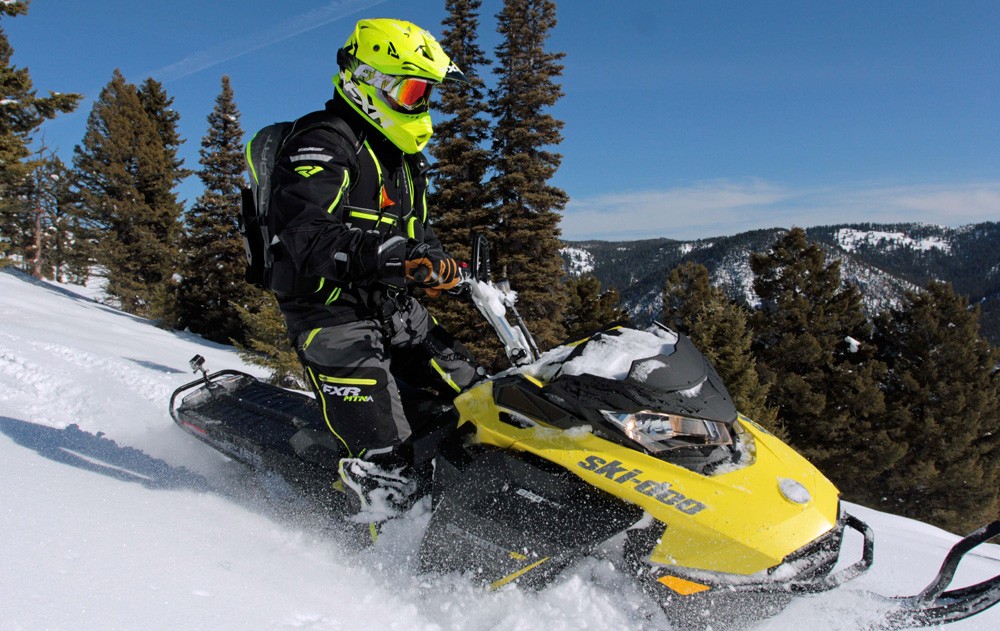 Once you throw a leg over and spend some time on the SP; you’ll feel as we do that it is the true darling Ski-Doo’s GEN-4 REV Summits.

Rasmussen installed one of his designed lower handlebars on the GEN-4 Summit which made us more confident as we tackled the slopes in Ride Rasmussen Style fashion. We understand why low handlebars are essential when dialing in proper body position to negotiate the wrong-foot forward maneuvers Rasmussen promotes. If you are a rider going for the upper reaches in rider ability, you’ll need one of these bars; if not, then stock bars and post are fine.

Also, when hopping over from one runningboard to the other, we felt the seat on the GEN-4 is too tall. Again, when in the Professor’s classroom, you’ll notice this. But in most cases stock is good enough and the Summit mountain seat is fine. The 2017 GEN-4 Summit we rode with Rasmussen did not have a lower seat, though we wished it did; but we did work with it. We are learning most mountain seats, if not all, are too tall for assertive runningboard, wrong-foot-forward and hop-over moves. 90% of mountain riders will not know this, perhaps, but we did in the Rasmussen classroom.

Overall, though we are adding this tidbit to this Summit 850 SP article, the aforementioned is true for this model, if you are planning on going all out as a Rasmussen intern, as the SP shares the same handlebars and mountain seat as the X-package Summit 850.

Lastly, the 850’s motor, clutching, handling were all oh-my-goodness-gracious-Jiminy-Christmas-blah-blah-blah awesome. The 850 with its fuel injection, boost assist and pDrive make a day’s work, easy work. To that end, the Summit 850’s track is phenomenal.

The “Schooled” Professor, as he is known, told me, as we sat in a restaurant, I needed to avoid working so hard on the GEN-4, as it does not need that much muscle input. Rasmussen caught me pulling some steep sidehill cuts while dog-paddling along with the outside leg – way too much paddling. He said, “Mountain riding should not be that difficult; it doesn’t require that much work and effort, especially on the GEN-4.” He noticed I was out of breath on one long, long sidehill cut, “Let the GEN-4’s agility and nimbleness work for you.”

Is that all it takes to get a passing grade, Professor? I can do that… GEN-4 style.