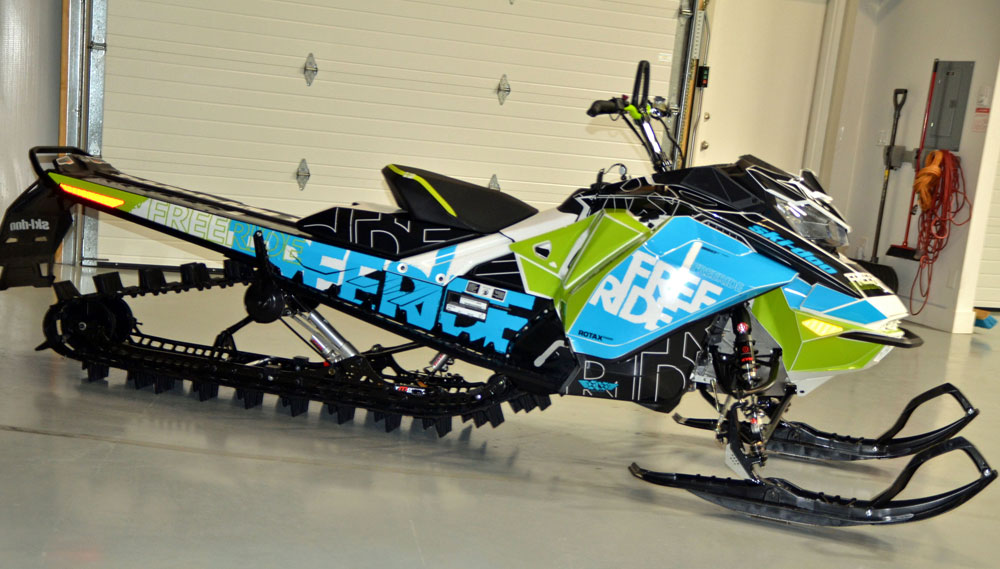 As expected BRP’s lineup of 2018 Ski-Doo snowmobiles gained more of a good thing – the GEN-4 chassis with the next generation 850cc Rotax E-TEC Twin. Unexpected was Ski-Doo’s new technology E-TEC SHOT starting system that lets you pushbutton start your sled virtually all day and yet adds less than two-pounds to a basic pull-start off-trail mountain sled. It’ll be a boon to powder riders.

Like Rotax Electronic Reverse (RER), E-TEC SHOT has the potential to revolutionize deep snow riding. While electric start is not adored by mountain riders; Ski-Doo notes that about half of its deep snow sales come with it and its added 20 plus pounds. 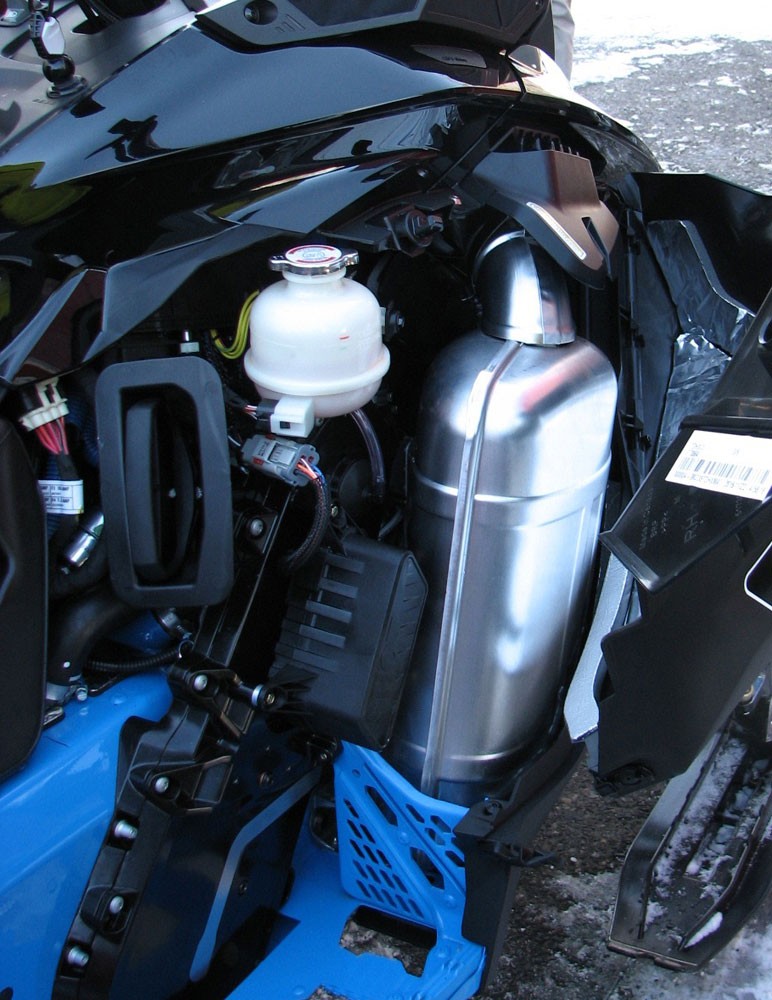 New technology continues from Ski-Doo/Rotax with the SHOT starting system. Note the “black box” located adjacent to the muffler. SHOT’s capacitor unit is small, weighs less than two-pounds and starts the 850cc E-TEC within a one-third rotation of the crank, it will be popular with deep snow riders.

SHOT (Start + Hot) features a large rapid discharge capacitor called Ultra Capacitor, that from a press of a button, dumps a stored charge to the motor’s magneto, turning it into an electric starting motor. With the charge, the electrified magneto spins the 850 E-TEC motor’s crankshaft, one-third of its rotation, which is enough to bring motor to life. This is not “electric” start as we know it where a battery forces a starter motor to engage a ring gear which spins the crankshaft to coax a motor to life.

When engaged the SHOT button wakes up the sled’s electronic control module, which directs a charge to the magneto, while supplying a precisely timed directly injected fuel charge to feed the engine.

This capacitor discharge unit is batteryless – no starter motor and no ring gear. Just a simple black box with capacitor and wiring harness. Total weight is two pounds of hanging weight and no rotating mass.

Here is how you’ll work it. In the morning, or at first use, normally start your 2018 Summit or Freeride with the pull rope. After two to three minutes, the large volume ultra-capacitor charges to full capacity. After this, when the snowmobile – Summit or Freeride – is shut down, a 1.5-second press on the SHOT button (which also doubles as the RER reverse button), starts the Summit or Freeride. No whirl, clunk and grind from a starter motor and ring gear. 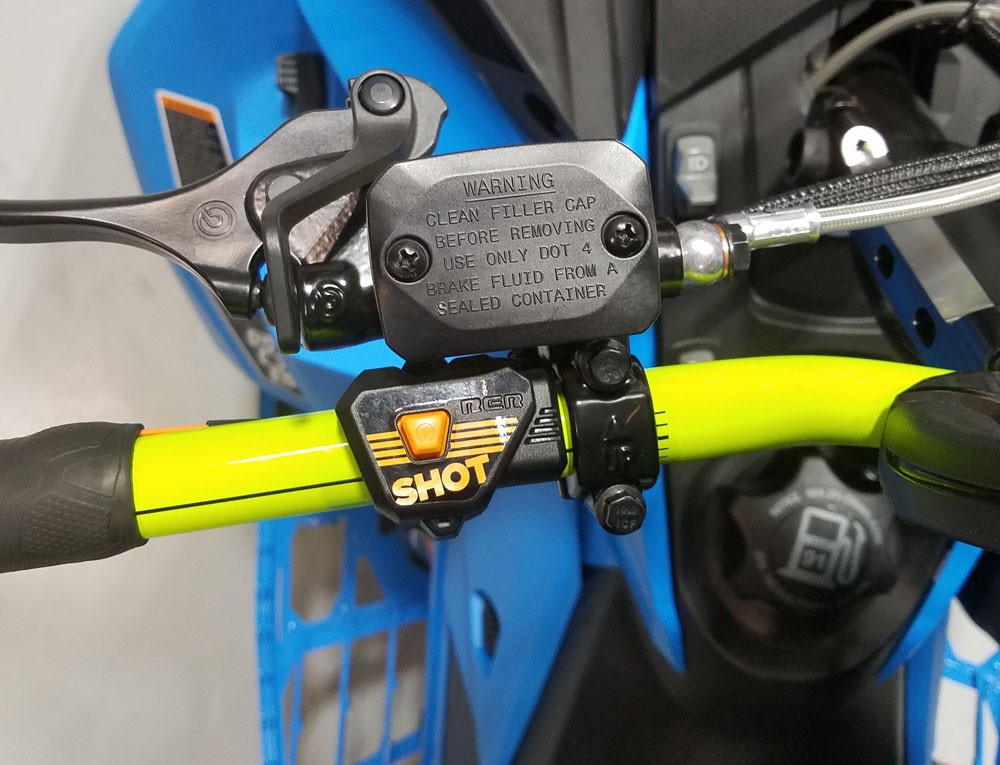 The one-shot hot button for SHOT is also the RER engage button when the motor is operating.

When riding the 2018 Summits and Freerides in British Columbia this past January, we never pulled a rope on any 2018 mountain snowmobile after the initial early morning pull. The capacitor holds enough charge for up to 30 minutes after a hot snowmobile is shutdown.

Expected pricing for this batteryless and non-starter motor electric start should be about US$600. We repeat, SHOT is not backwards compatible to 2017 Gen-4 Summits, nor can a 2018 Gen-4 Summit or Freeride, built at the factory without SHOT, be modified to receive SHOT as it is factory-installed only!

SHOT is revolutionary, giving mountain riders all the benefits of RER and electric start without weight – well, two-pounds of weight. This means, after initial pull, and when in those precarious off-camber, weird and distorted stuck positions, the Summit or Freeride owner can pull up the kill switch plunger, hit SHOT, start the sled without performing artsy antics to pull the rope across the fuel tank, side panels or wherever to kick the Summit or Freeride to life. 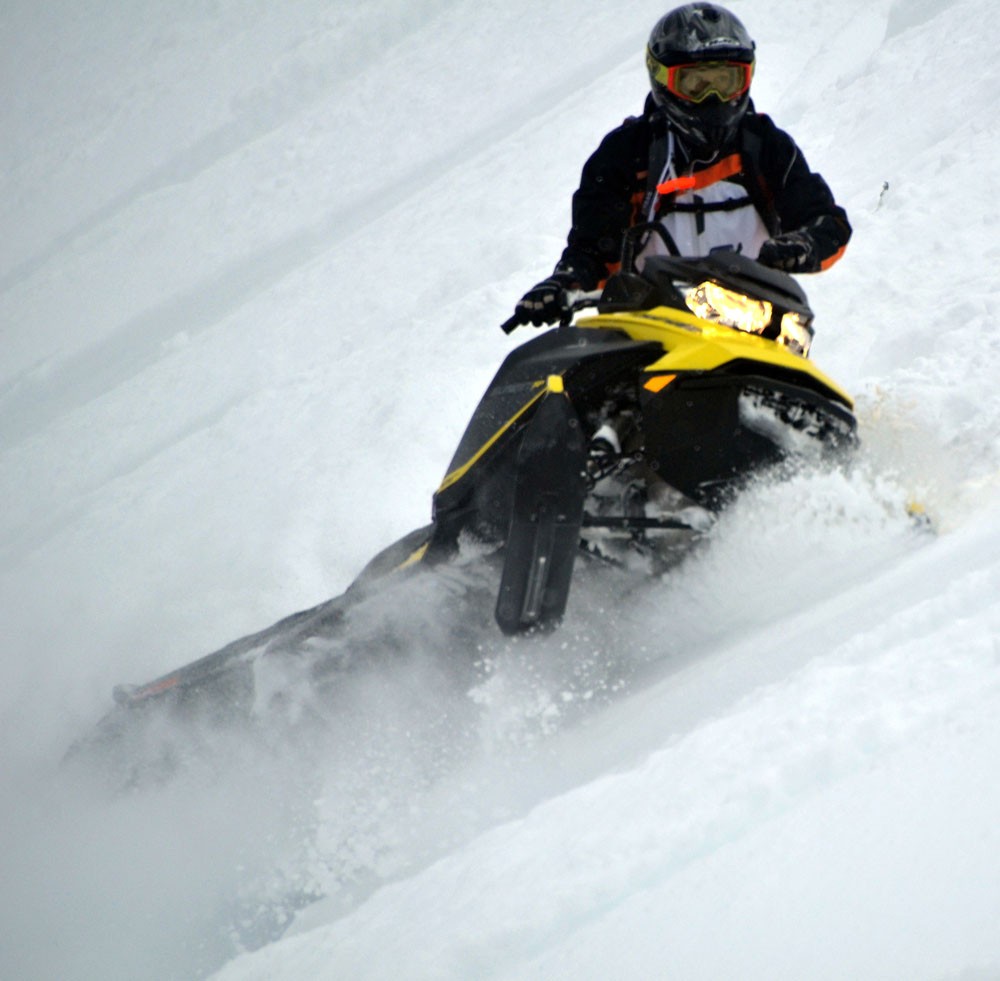 The long Summit SP 175 can roll into a sidehill with simplicity.

We knew it was a matter of time when Ski-Doo would bring to market a super long track Summit X and SP. Ski-Doo has swapped out its XM Summit X 174 for a new Gen-4 REV Summit X and SP 175. The one-inch gain in length is due to Ski-Doo using a 3.5-inch pitch Powder Max II FlexEdge track. The 175 Summit X and SP are five inches longer than the 165 in total vehicle length.

After testing, retesting, riding and riding again, Ski-Doo’s engineers moved, call it spread apart from each other, the tMotion rear suspension’s scissor and mounting points, lengthened torque rods or lowered mounting bolt positions on the tunnel to give the long track the flotation they wanted, and the turning radius and handling ease to, in essence, match that of its 165 Summit X and SP. 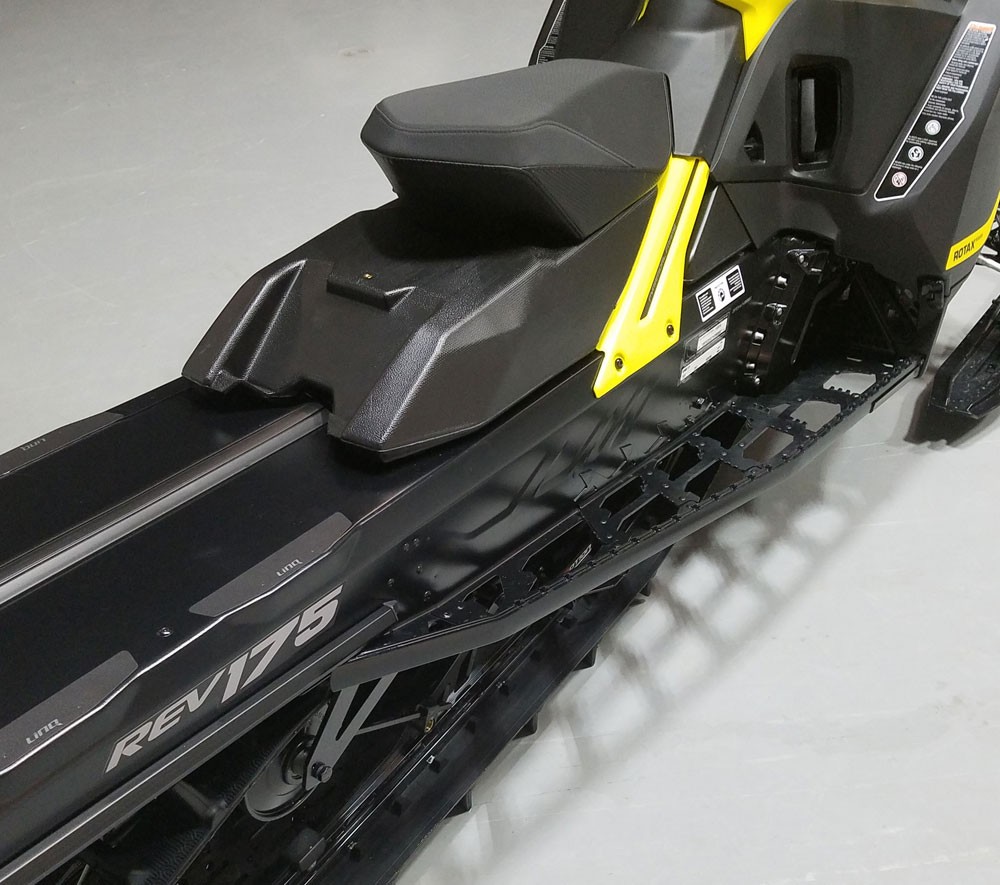 The 175 Summit SP comes equipped with the same style runningboards as the 2017 SP, albeit, just longer.

The 175 Summit X and SP are cheating scoundrels. These two extra-long, long track snowmobiles will climb and float up the steepest and deepest mountain, better than ol’ Max and The Grinch as they climbed Mount Crumpit to dump it. The Gen-4 Summit 175 is buttery smooth and requires just a wee bit more energy to maneuver than the 165. But, we all know how little effort, almost zero input, is needed to guide a Summit through the trees.

Who is the 175 Summit for? It is for the rider who wants to stay planted and secure, while having increased flotation without giving up agility, well, maybe just a half-percent over that of a 165.

We learned in Sicamous, British Columbia, Canada, the Summit X 175 will elevator down, Ride Rasmussen Style-like. Though it is long and has a large footprint, in the right conditions, and if properly setup for a ride down, the 175 Summit will take an elevator ride like a 165 and 154 Summit, with ease, while giving its driver a giggly good time.

If you’re one who has found the powerful 850-equipped 165 Summit X or SP to tail walk, or rather, be nose light on steep ascents, then 175 Summit X and SP will keep your booty secure.

The X package Summits will have a new color option, Octane Blue, the color used on the 2017 Freeride; gone is the white and orange combination. The Summit SP will remain exactly as it was in 2017 with exception of optional SHOT, if built factory installed.

The new Gen-4 REV 850 165 Freeride is very much Summit X-like, but all big drop and big hit in its purpose. 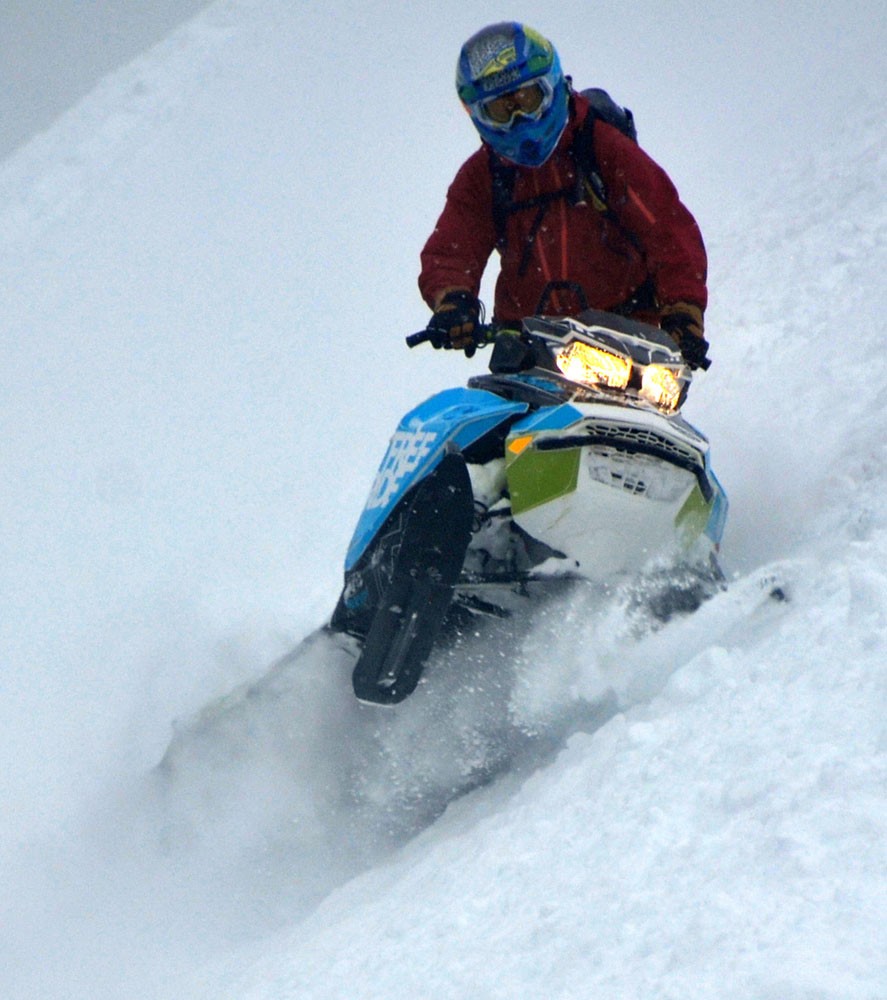 165 Freeride is all about the sidehills, the deep powder and long pulls. Yes, it is a big hit snowmobile, but a deep powder player as well. 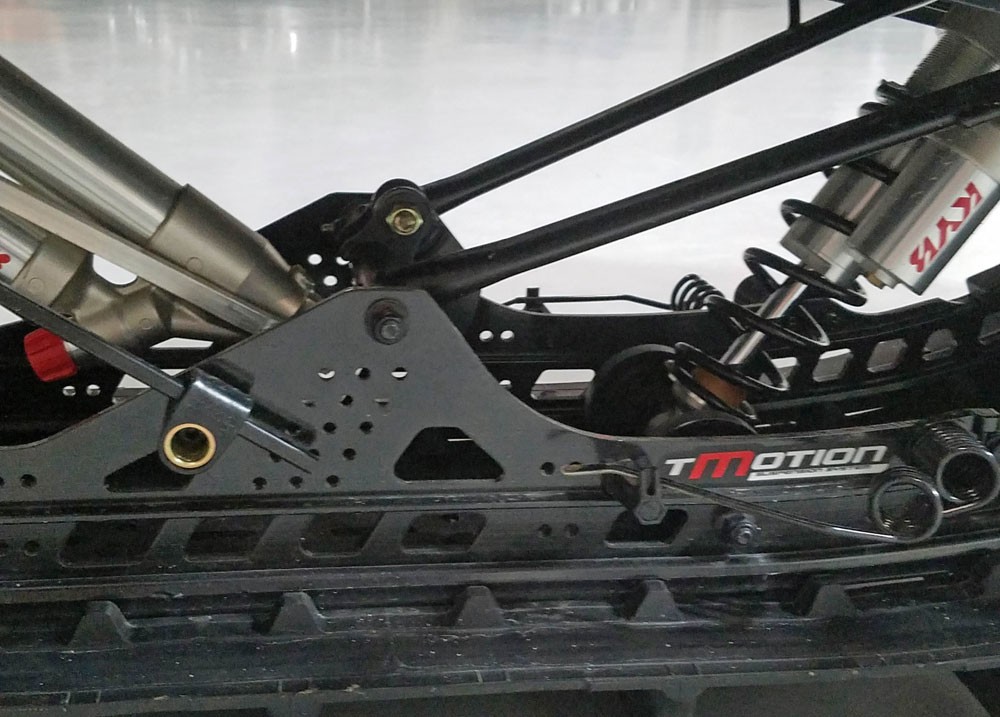 Being the 137 and 146 will attract ditch bangers and trail burners, the runningboards are flatter and wider throughout the board’s length. The two 154 variants and the 165 utilize the same runningboards as the Summit X. 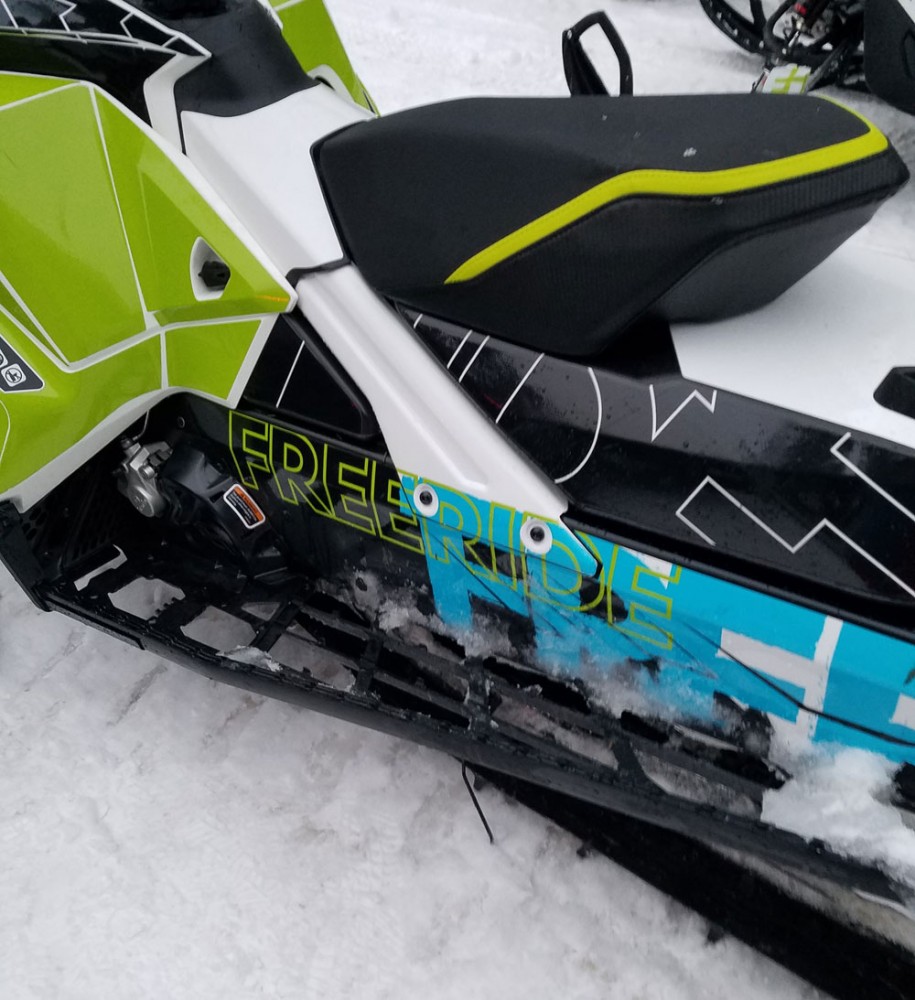 The Freeride’s painted runningboards limit snow and ice flash freeze. Also, the dump holes are large, to allow snow to drop through.

To ride the 154 and 165 Freerides in the mountains, in its narrow ski-stance is “Wow” times two. We’ve come to love the XM Freeride in its traditional more-than-crossover element, but the new Gen-4 REV Freeride is all Summit X with Superman suspensions. No powder and steep-n-deep compromise, just Summit X-ing Freeride style.

Like the Freeride, Ski-Doo re-thought how its Renegade Backcountry owners ride their sleds. While it now comes with the Gen4 and 850, it’s more than that as they have a special hybrid cMotion rear suspension. Designed with new tipped rails, the crossover design is claimed to minimize compromises by bringing together the deep snow capability and ease of boondocking of the tMotion with the control, comfort and precise cornering of the rMotion. You’ll find a rising rate rear shock motion ratio and separate springs to maintain ride comfort in both big and small bumps.  Ski-Doo makes these claims for its cMotion hybrid rear suspension: 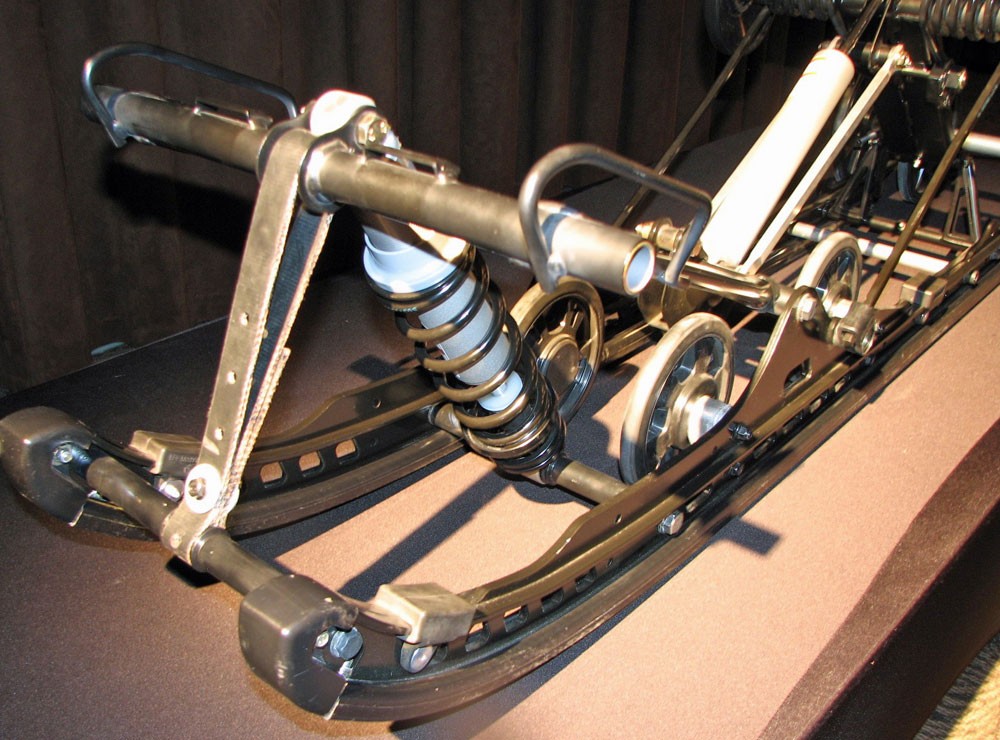 Ski-Doo recognizes that off-trail riders have unique needs and fashioned the new cMotion to meet them. Note the front arm on this hybrid design utilizes a dual-action spring on the front shock and it features tipped-up rails for trail cornering.

For 2018, the X-RS package features a new runningboard designed for optimal traction, control and durability in stand-up riding – both on- and off-trail.  Flatter and wider for most of its length, the new boards are stronger due to the use of 3 mm aluminum sheet (compared to the 1.8 mm on other models) and riveted to the tunnel.

Both the early season GEN4 850 XRS and Blizzard 129 offer the new platform and unique power of the Rotax 850 E-TEC twin. They will have RAS3 front suspensions, rMotion rear and premium shock packages to set them apart from the in-season models that don’t offer standard the adjustable ski and unique sport styling. 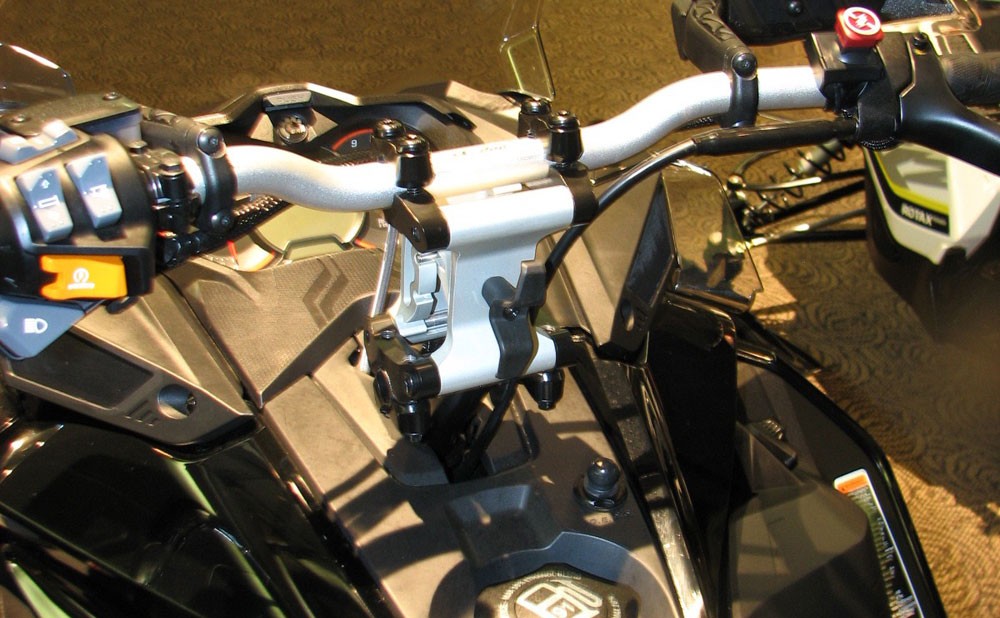 For mountain riders, Ski-Doo’s Remote Limiter Strap Adjuster, sold through its accessory catalog, is now designed as a knob-adjustment, rather than a forward-and-back lever mounted on the tunnel at the calf/knee area. The adjustment knob sits below the handlebar mountain grab bar.

To protect against wind and tree debris, new flexible mountain handguards are available as an accessory and are designed not to break, but flex, when a snowmobile is rolled over on its hood or side.

Status Quo Plus Colors and Options

Expect the MXZ 850, 850 TNT and 850-powered Renegade models to continue with minor upgrades. Do not expect to find a 600 E-TEC or four-stroke ACE in any GEN4 platforms for 2018 as the current REV GEN4 chassis and engine bay were designed exclusively to suit the dimensions of the narrower and centered 850cc twin. That’s why all other trail models on the previous REV platforms from Grand Touring to Renegade Enduro to the Expedition sport/utility series transitioned with minimal changes other than graphics and some accessory options. The same is true for the Tundra and Skandic models as well.

2017 brought a brand new next generation chassis expressly designed to meet the needs of an equally new and more powerful Rotax 850cc E-TEC Twin. Model Year 2018 expands on that in many ways, especially meeting the needs of performance riders in deep snow, backcountry, trails and off-trails. SHOT pushbutton starting is a new technology to make mountain riding more enjoyable. The cMotion hybrid suspension adds capabilities to on or off trail riders. And the high-performance rider gains the benefits of GEN4 handling with 850 power for extreme trail performance.

BRP’s lineup of 2018 Ski-Doo snowmobiles brings new ideas, fresh thinking and an expansion of the options to appeal to more riders that should help keep Ski-Doo Number 1 in snowmobiling.