Ski-Doo’s Big News for Flatlanders in 2017

Western deep snow, high-markers don’t get to have all the fun! Ski-Doo gives us flatlander on- and off-trail runners some arm-wrenching grunt sleds as well. Unlike Polaris, which first introduced its newest Cleanfire 800cc twin to Rush and Switchback trail sleds before making them an integral part a year later of the new AXYS Pro-RMK series, Ski-Doo plays well with all of us snowmobilers, providing the new 850cc power twin in top-of-the-line Summits and a new series of MXZ and Renegade models. Thank you, Ski-Doo!

Just as Ski-Doo combines an all-new big bore twin with a fourth generation REV chassis for the mountains, this pioneering snowmobile company does the same for top-of-the-line performance sleds. While Ski-Doo may claim that its latest GEN-4 sleds continue what we’ve come to expect from the REV creator, don’t be fooled. The 2017 GEN-4 MXZ and Renegades are hardly “me-too” technology. They are the result of what experienced engineers and veteran snowmobile minds can create when the computer screens are blank and they have the mandate to create the best Ski-Doo ever! Make it powerful. The 850cc Rotax twin does that as we doubt we’ll see a more potent normally aspirated twin (two-stroke or four-stroke) for model year 2017. 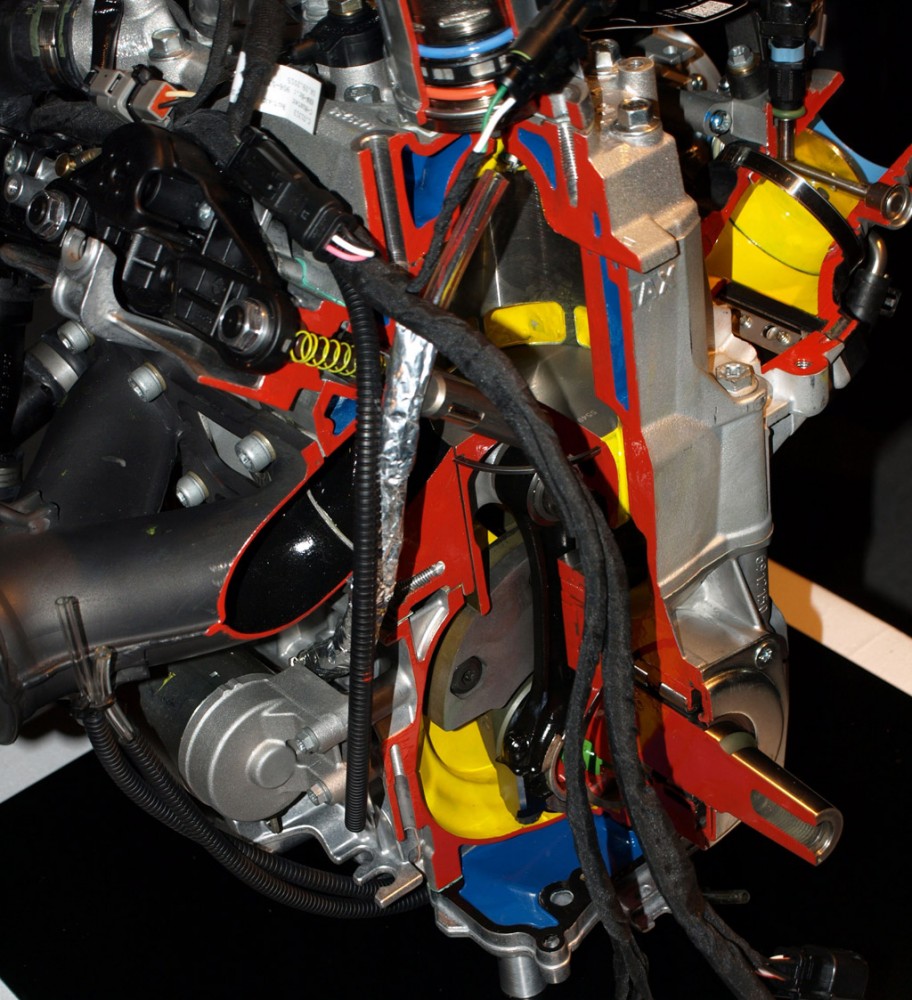 This cut-away view reveals some of the inner workings of the Rotax 850 two-stroke.

Make it handle. This one is a bit tricky as the REV is acknowledged to be one of the best handling sleds you can buy. But, mission accomplished as Ski-Doo chassis engineers managed to noticeably improve the GEN-4 MXZ and Renegades. Centering the narrowed 850 twin in the engine bay allows the RAS3 front end to grip with greater balance. You never realized that the existing REV with the 800 ETEC tended to put more weight to one side, leaving you to unwittingly put more effort into hard cornering. The new chassis and weight balance lets you corner more quickly and confidently. You might never notice this factor unless you come off a 2016 MXZ REV and get on the Gen-4 MXZ. 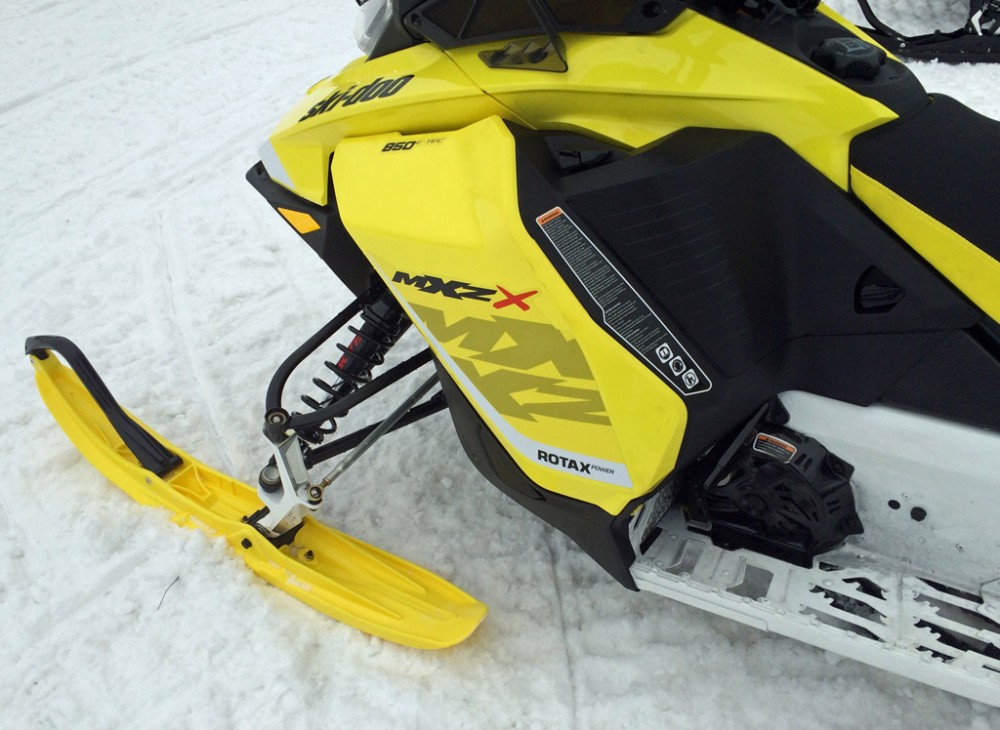 Ski-Doo updated the front suspension to a third iteration of its Response Angle Suspension that works with a new rack steering system.

Just as with the Summit models, Ski-Doo paid attention to sled balance in its flatland chassis. From that blank computer screen came a sled that Jose Boisjoli, BRP/Ski-Doo’s top executive, claims “sets the benchmark for the snowmobiling riding experience.” In a presentation to snowmobile journalists gathered in Riviere du Loup, Quebec this past January, Boisjoli explained that Ski-Doo sees itself as “…the leader in the (snowmobile) industry and we wanted to go for it… and believe it will make a statement.” 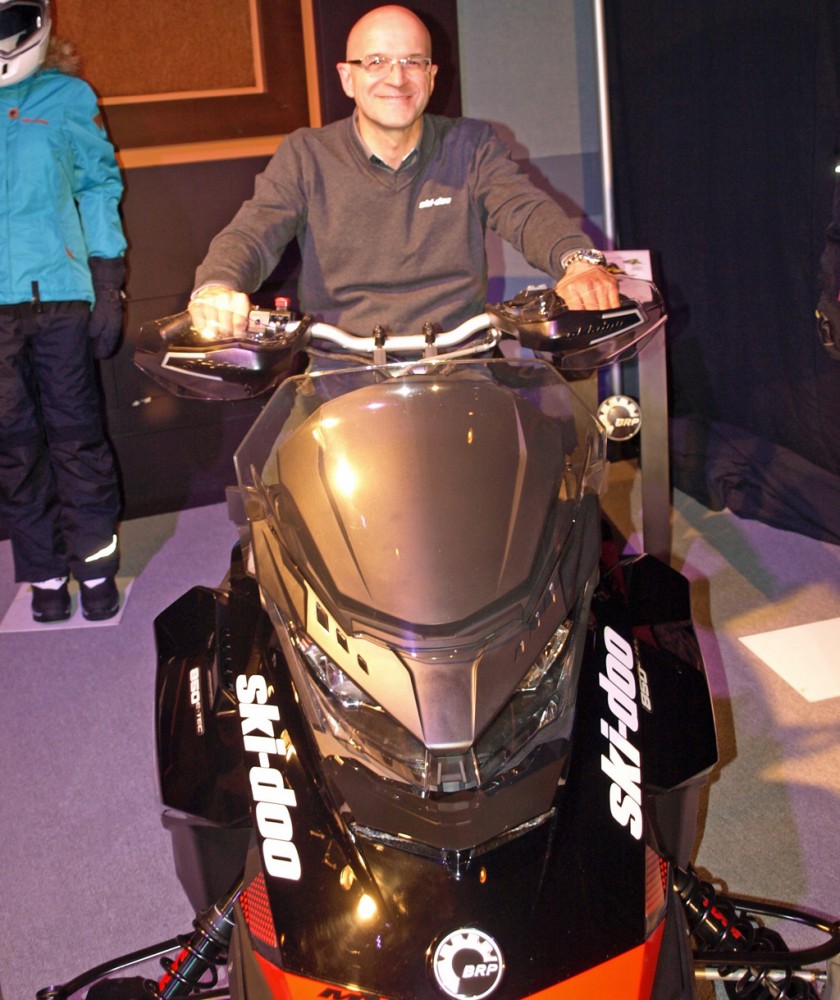 At the press introduction of the all-new Generation-4 Ski-Doo models, Ski-Doo’s chief executive Jose Boisjoli emphasised, “We can make a sled that will be a statement.”

The trick to creating an all-new statement proved trickier than you might think. It required rethinking the snowmobile and how the rider interacts with it. Such thinking led to the original REV back in the early 2000s. Now, with the rider-forward position accepted and adopted by virtually all snowmobile brands, where did Ski-Doo designers go? The goal was to bring the riding experience to a new level. Ski-Doo wanted to maintain the DNA that has taken the brand from its pioneering 1960s Olympiques through its racing TNT heritage of the 1970s and on to the current REV chapter of Ski-Doo history. Styling became important as the engineers and designers had to bring a Ski-Doo permanence to its future models. At the same time, the styling had to literally embrace the engineered mechanicals that include the third generation of Response Angle Suspension, the improvements to its rMotion adjustable rear suspension and the taller big twin 850. With the REV evolution came a just right fore and aft balance. With the GEN-4 comes a side-to-side balance that lets you almost think these new GEN-4 models through the turns. They are seriously intuitive. Some of that comes from a new rack steering system that adds on-trail precision, virtual elimination of bump steer and that will be standard on select MXZ X and Renegade X models.

As with the Summit, the MXZ/Renegade GEN-4 platform is new – lighter and four inches narrower. The MXZ and Renegade versions feature what Ski-Doo calls “ergo-step” side panels in which the rear of the panels have a three-position stepped design to let you get far forward for maximum cornering agility. There is also an open toe hold that eliminated the sides of the toe stirrup to allow freer movement. If this makes you uncomfortable, no worries as there is an optional side brace that can be added. You’ll also find that the GEN-4 seat was redesigned to offer a wide, flat fanny, rest but a very narrow motocross-like front section to inspire spirited riding in tight sections. The runningboards with their nearly flat foot area are designed to make you more comfortable when in a seated cruising position as well as when in a more aggressive standing mode.

To enhance on and off trail comfort, the runningboards are flatter and feature an open toe hold design.

When in Quebec for the GEN-4 introduction, we had the opportunity to test ride various 2017 prototypes at Ski-Doo’s private trail system. We found that the “forward adjustable riser” that is an additional feature that will come standard on the X versions of the GEN-4 MXZ and Renegade models can truly make a big difference in your overall enjoyment of these sleds. It adds four fore-aft positions over a four-inch range of movement to allow quick and easy handlebar positioning to suit full-on cruise to full-on wanna-be racer. This tool-less handlebar adjustment does not raise the bar setting; rather it brings the bar forward or away from you. The base 2017 GEN-4 models won’t have it as standard.

There are four positions for the handlebar riser that travel through a forward pivot that allows you to find your on-trail sweet spot.

Indeed, this is one of those rare times when we would recommend opting in for the Spring or Early Season buy-ins to get the sled you want. While the in-season versions of the GEN-4 MXZ and Renegades give you the potent new 850 twin and its new performance-matched drive system, the pre-season specials really do offer impressive features to make coughing up the cash for the down payment worthwhile.

Riding impressions of the Summits at altitude showcased serious power. Well, take that down to sea level and you really want to hold on! This new Rotax 850 makes an impression of the serious arm-stretching kind. We suspect that Ski-Doo deliberately tuned this beast to make you fully aware of its explosive midrange and up capabilities. Heck, no one’s going to know how fast it accelerates until some publication runs it through a speed trap. Regardless of that, what you will know as soon as you sit aboard any of these 850-powered GEN-4 models and slap the throttle lever to the bar is just how rapid it responds. Subtle? Not likely! The fastest ever? Couldn’t tell you. But I can tell you that the prototype GEN-4 850 MXZ and Renegades we tried are seriously quick and fast trail sleds that can also dawdle if need be. Buy one to cruise and put on a serious amount of miles? No problem. Buy one to assuage a mid-life male crisis? Right on! Money well spent. They don’t come in sports car red, but that bright yellow attracts attention. 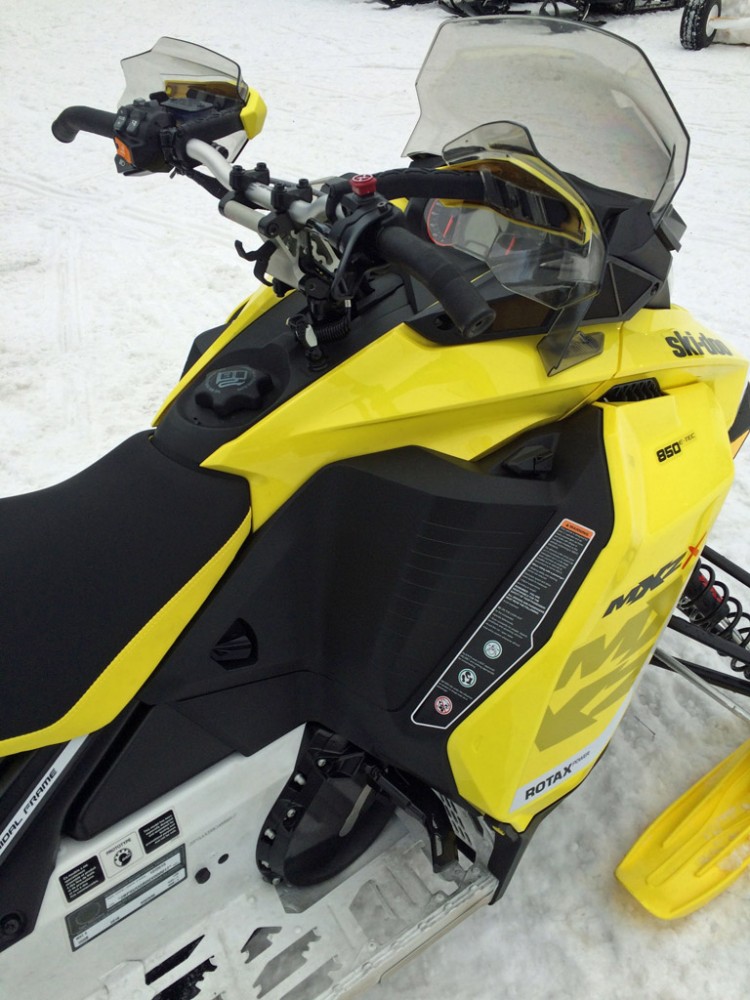 Ski-Doo’s MXZ X Generation 4 styling flows smoothly, hiding the fact that the new 850cc engine is taller but more narrow than the 800R used in the 2016 models.

The next generation Ski-Doo MXZ and Renegades were much more than we expected. They are trick and creatively advance the Ski-Doo mythology that started with the original light-footed Ski-Doos of the 1960s and continued to the original REVs of the 21st century.

What did we expect from Ski-Doo for model year 2017? Well, given that this has been a sad year for snow and sled sales through January were off as much as 20 percent industry-wide, we figured a lot of new color and graphics packaging would highlight Ski-Doo 2017. You will find that in the non-GEN-4 models. Don’t expect modern GEN-4 MXZ or Renegades to come with the 600 ETEC, 1200 4-TEC or ACE power. We suspect that we’ll see those in due course; just not yet. 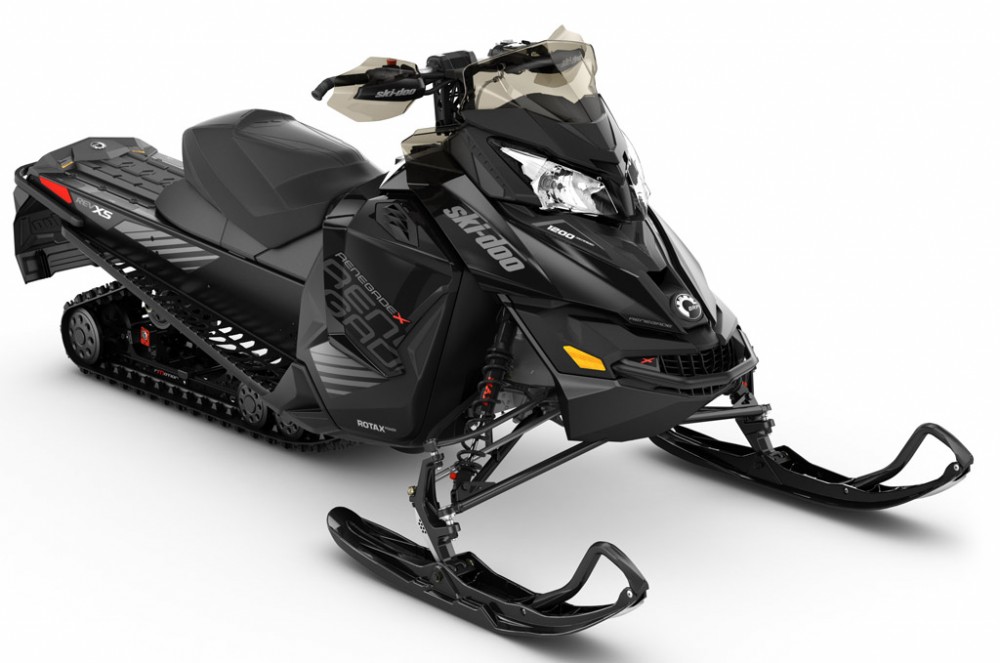 The standard Renegade X features the REV XS platform and offers engine option that include the 1200 4-TEC.

You can still find 800 and 600 ETEC powered sport MXZ and Renegades. The Grand Touring, Expedition, and Tundra series continue into 2017 with minor updates. The Renegade Enduro offers an Air Ride rear suspension and both four-stroke and two-stroke power options. The Blizzard introduced last season continues with its 129-inch track length but on the XS platform. The 2017 MXZ Adrenaline and Sport continue, but it’s the TNT 850 or the MXZ X models that you’ll want if new counts.

Test riding the 850 GEN-4 models actually took our breath away at times. These sleds can pull off a corner like a bad boy hyped on meth. Subtle? No. fast and quick? Oh, yeah!

Ski-Doo’s news for model year is serious performance for serious snowmobiling. As Ski-Doo’s Jose Boisjoli said, “We can make a sled that will be a statement.” Mission accomplished.