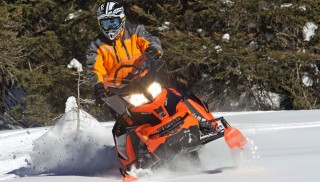 The crossover segment in snowmobiling has been around for over a decade now with various kinds of crossovers from the individual OEMs. Some crossovers are long-tracked trail sleds; others are short-tracked mountain sleds. Crossovers generally lean more toward the mountain side or to the trail side; it is up to the consumer to ultimately decide where they will spend the majority of their time and select the snowmobile accordingly. One of the main considerations we look at is the track – its length and height. The more time you want to spend in the backcountry means more track length and height will be needed. If the you spend very little time in the backcountry then there is less of a track requirement. 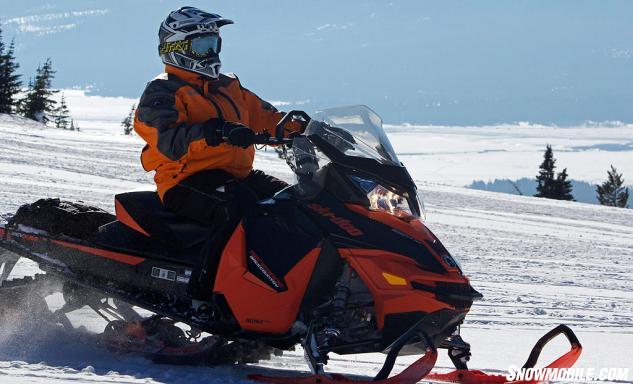 On the trail the Renegade Backcountry is right at home, even though it is in the REX-XM chassis.

What does this mean? It means that the Renegade won’t sidehill like a Summit and it won’t handle a tight corner on a trail like an MXZ. This is the nature of a crossover sled – somewhere in between.

Our test Renegade Backcountry came equipped with the 800cc E-TEC engine, although consumers have the option of the 600 HO E-TEC. The 800 E-TEC has had quite a few years on the snow and has proven to be a very reliable and powerful engine. Third party testing has shown the 800cc two-stroke twin can consistently produce 163 horsepower.

The ski stance on the Renegade Backcountry varries from 38 to 40 inches wide, but with the right amount of fineness it can be rolled into a sidehill.

We’ve found that the 800 E-TEC can be down right sneaky with its ability to go from a low power setting, then react to a throttle stab by the rider to power the snowmobile up the mountain. It doesn’t seem to hit as hard at the bottom as other 800s, but don’t be deceived; this two-stroke delivers.

Ski-Doo claims that 19 miles per gallon can be achieved with the E-TEC. That may be true at mid RPM ranges, but at high RPM we’ve only experienced slight fuel savings over other OEM’s 800s. We always have, however, noticed better oil consumption in the E-TEC. Fuel efficiency tends to be directly relatable to a rider’s throttle thumb.

The Renegade has the Ski-Doo RAS 2 front suspension with HPG Plus shocks. This system features new geometry on the front suspension that aids handling. Plus, Ski-Doo’s RAS2 sheds about 1.7 lbs from previous models. 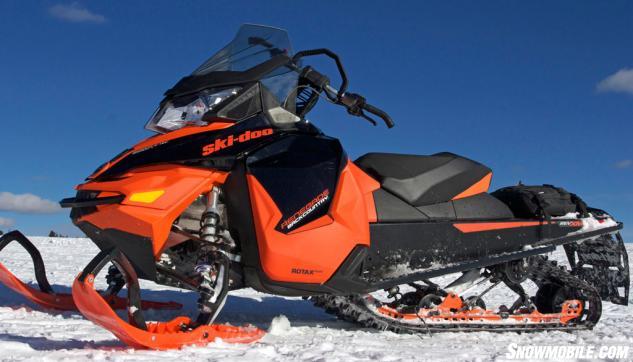 HPG shocks are featured on the front and rear suspension on the Renegade Backcountry.

The rear suspension features HPG shocks on the tMotion rear suspension. The “t” stands for torsion and means that the rear skid is able to flex. The rear arm has a ball joint that allows the rear skid to flex laterally. Ski-Doo claims that this ability to articulate makes it easier to initiate a sidehill. 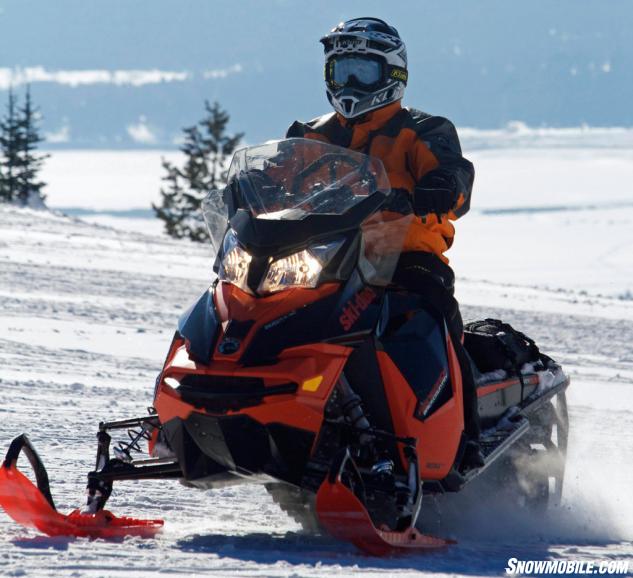 Ski-Doo was able to lighten the front suspension by 1.7 lbs.

To advance this rolling motion the engineers developed a Flexedge track. To maintain the integrity of the track as it is stressed during normal riding conditions, fiberglass rods are inserted as reinforcement. On a normal track these fiberglass rods extend almost the entire width of the track. Ski-Doo shortened these rods to enable the track to roll or flex. To date the other OEMs have opted to keep their rear skids rigid, leaving it up to the operator to decide how much effort is needed to initiate a roll, rather then leaving a suspension and track to decide for them. 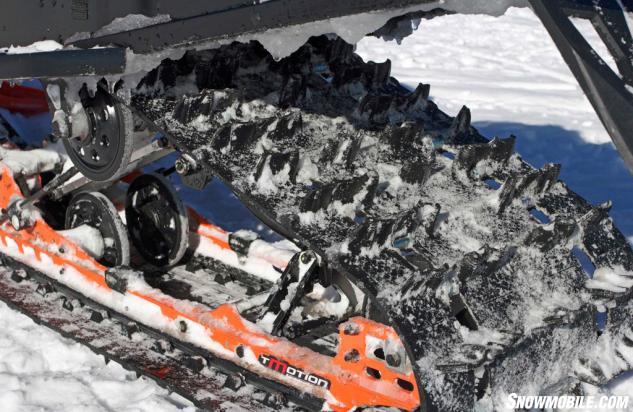 The Renegade Backcountry comes with a 1.6×146 inch Flexedge track, and t-motion rear skid.

We’ve found that the Renegade is very comfortable to ride on the trail and handles corners well. The skis do not hunt and dart in another ski track. The 800cc engine has plenty of get up and go out of a corner. The 1.6-inch tall Cobra Flexedge track also has the traction to allow all that horsepower to be transferred to the snow on most trails. Even though the Renegade Backcountry is in the REV XM mountain chassis, it leans more toward trail performance rather than mountain performance. We find the track height to be somewhat inadequate. The 1.6-inch lug height does not give enough traction in the fluff, even though its 146-inch length is average for a crossover snowmobile. A 146-inch track is long enough if the lug profile is tall enough, but we just don’t think that a 1.6-inch tall track is adequate it in serious backcountry. 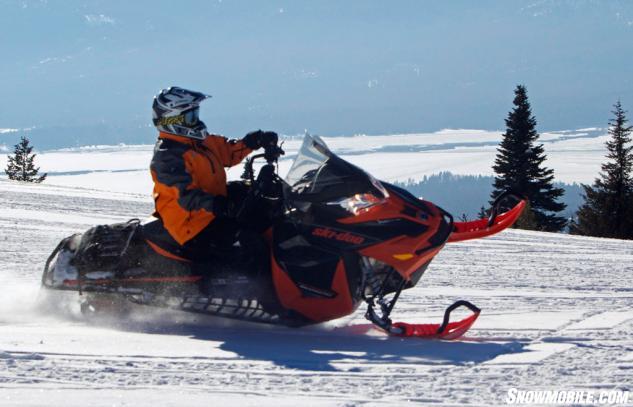 With the right amount of balance, even the wide front end on this Backcountry can hold a sidehill.

A snowmobile with a shorter track than the average mountain snowmobile has to be ridden a little different to keep up with the mountain sleds. A rider can use track speed to advantage and make up for the lack of traction, but this can be difficult as the rider obviously must be traveling faster. Faster track speed works up to a point, but some terrain is tight and only allows a rider to go so fast. As long as potential owners of the Renegade Backcountry do not have the illusion that they can keep up with mountain sleds in the backcountry, we expect that they will be content with this snowmobile. Crossovers like the Backcountry are compromises to both trail and mountain designs.

Ski-Doo designed “powderdynamically” efficient side panels that are supposed to glide through the snow, not allowing the snow to build, thus creating drag and slowing it down. The side panels are also supposed to aid in the ease of initiating a side hill, which works with the tMotion and Flexedge track.

Since a lot of weight can be added to a snowmobile from snow that collects on the running boards, Ski-Doo designed large openings that allow the rider to stomp the snow out.  The running boards also have plenty of traction to keep boots in place when riding aggressively.

Years ago OEMs started to notice how much weight could be saved by not painting the tunnel. This trend of opting out of painting the tunnel continued for a few years. Interestingly, engineers eventually learned that non-painted tunnels built up massive amounts of snow, increasing the overall weight of the snowmobile. OEMs have since decided that it is better to take the increase in dry weight than have a huge gain of riding weight. 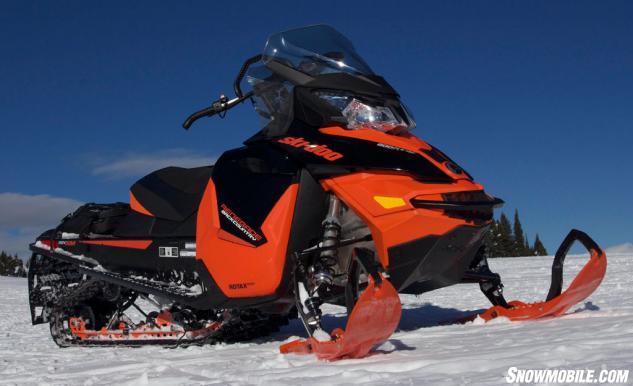 The 2016 Ski-doo Renegade Backcountry is available in black, and black with race orange.

Ski-Doo’s crossover segment is well represented with plenty of options out there if you spend most of your time on the trail. The suspension packages and track lengths will work great. True backcountry is not so well represented, where the 1.6 track will leave some riders wanting more. If you know that you will not spend as much time in the true steep and deep backcountry regions, then the Renegade Backcountry is an excellent option.