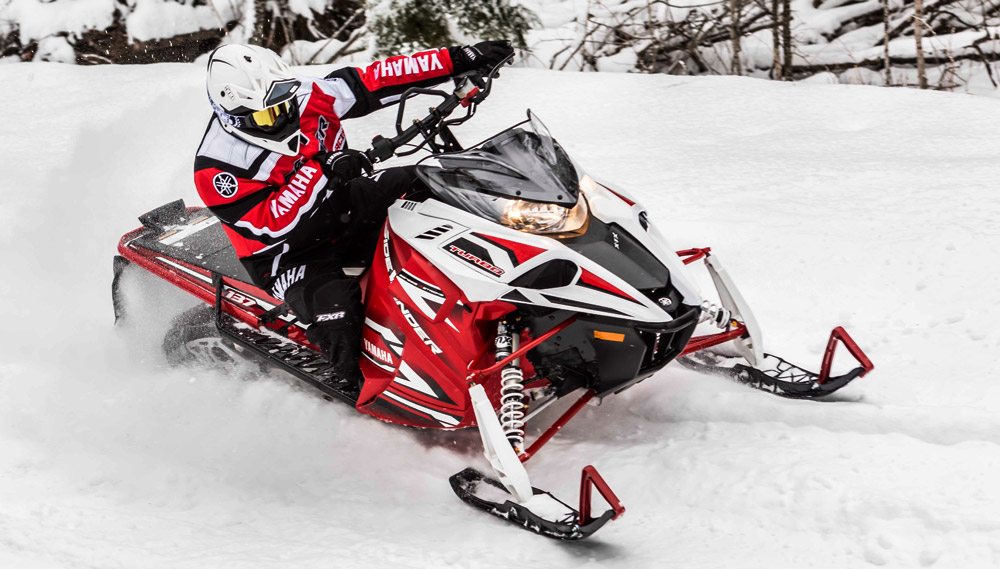 Yamaha powers up and turbo charges into the 800 class

If you had a sneaking suspicion that all that mountain and trail turbo business that Yamaha did the past few seasons was prelude to some upcoming scary horsepower in a generally available mountain or trail sled, you were kind of right. But, instead of continuing the turbo charade of the existing 1049cc Genesis four-stroke triple, Yamaha decided to power boost a version of its all-new double overhead cam, 12-valve 998cc triple that powers its YXZ1000R side-by-side.

In stock non-turbo form, the YXZ1000R delivers approximately 112 horsepower. Not so exciting. Boosted with a state of the art IHI RHF5B intercooled turbocharger, there’s nearly immediate access to 180-ish horsepower. Very exciting. And, of course, being a Yamaha four-stroke you should get an incredible rush of torque starting at about 3500 rpm and running up to its 8750 rpm max – or, however brave your throttle thumb is. Think of the turbine-like smoothness of the Apex motor and envision that on serious performance-enhancing boosters!

Let’s be honest, until Yamaha’s partnership with Arctic Cat, which supplies bodies, if not souls, for the new Viper models, the future of Yamaha snowmobiles looked bleak. Its core models of Apex, Vector, Phazer and Venture, while solid and durable as a stone, hasn’t captured much consumer interest in recent seasons. Then Yamaha and Cat forged an opportunity with Cat supplying a proven and popular chassis and suspension with known handling prowess and Yamaha supplying an out-of-the-box version of its 1049cc triple, a version of which appeared in various Vector and Venture models. The partnership gave Arctic Cat a new source of four-stroke motors to replace the Suzuki twins that will be discontinued at some point. Yamaha gained a high profile performance line of Vipers, which tracks customers from trail enthusiasts to backcountry powder explorers. 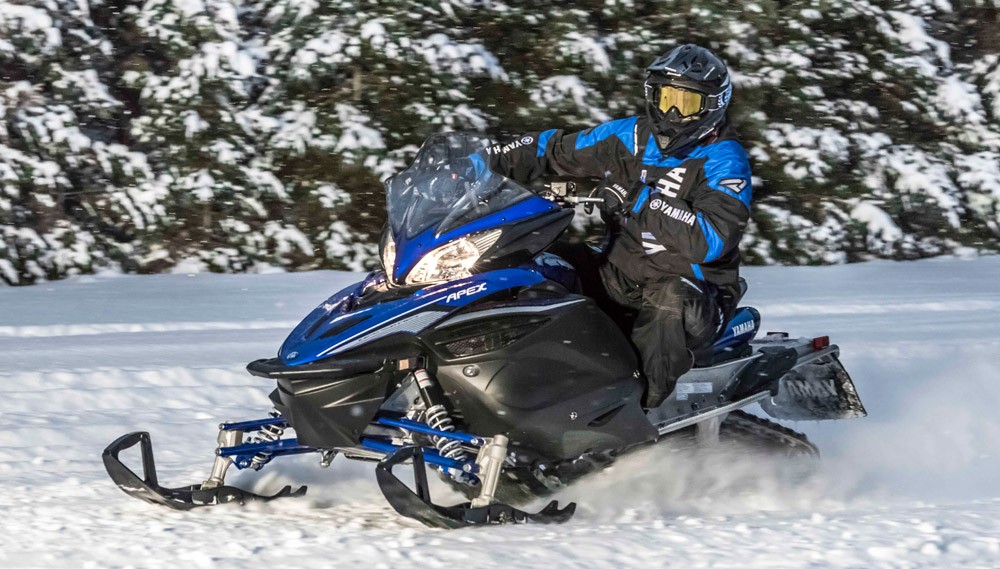 There’s just one problem with this arrangement. The Viper is a solid performer against other one-liter four-strokes and most 600cc two-stroke models. But this 600 class of sleds, while significant and representing about 40 percent of the trail sport market, meant Yamaha was missing out on a larger 60 percent piece of the snowmobile sales pie. The high performance Apex with its 150-plus horsepower four-cylinder power represents less than one percent of the sales in the 800cc sport category. Ouch!

This year Yamaha’s long tracked MTX models will have plenty of power to high mark and run the backcountry.

Rather than continue to turbocharge the existing Genesis 1049cc triple, which consumers have come to view as a nice 600 category runner, Yamaha did what Yamaha does – design, engineer and manufacture an entirely new product-specific engine that can be shared across multiple product lines. Like the Apex Four, this new 998cc triple gains employment in the wheeled category of UTVs (YXZ1000R), snowmobiles and, likely, marine products such as a replacement for its current SuperJet stand up PWC. After all, if Yamaha is going to spend major dollars on a new engine design, the company’s existing market share hardly supports that cost. But creating a base design that can be customized for specific power products does make sense.

Do understand that the YXZ engine is not the same engine that will power Yamaha’s 800cc class line of 2017 Sidewinder snowmobiles. Similar, yes. The same, no! That said, we note that the crankshaft of the YXZ design is the same and was designed to accommodate 200 horsepower, according to rumors that is. As of right now, Yamaha admits to seeing 185-ish horsepower on factory dynos and smirks if you ask if the engine could hit 200. 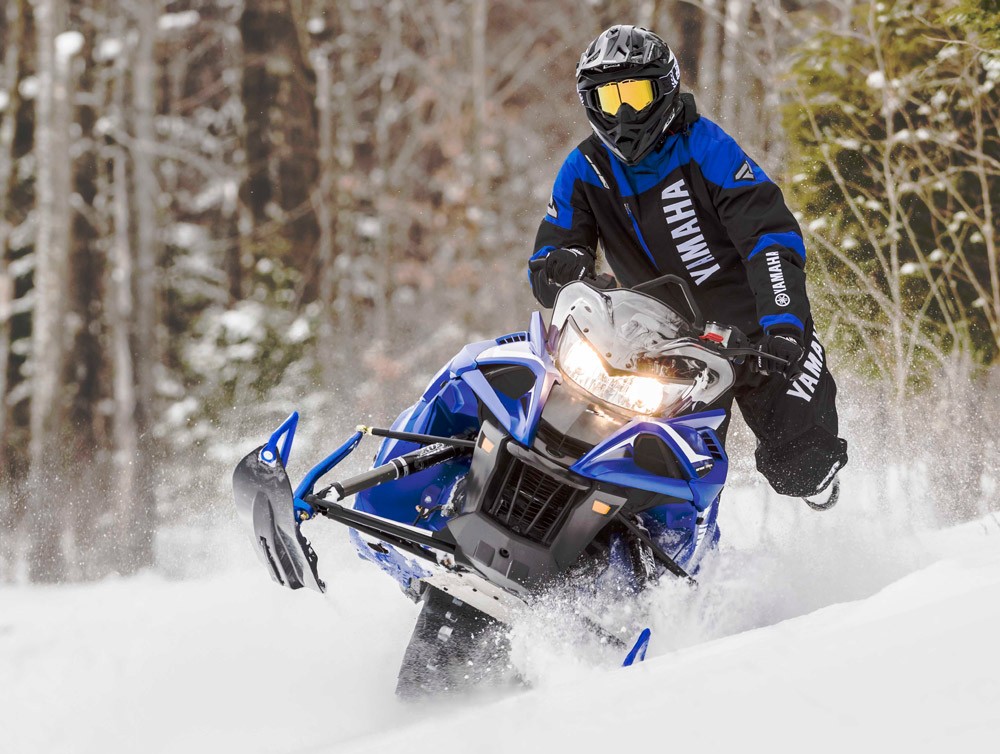 Available with either Viper or Sidewinder power choices, the new BTX is designed for sea level performance and blends a 153-inch track length with powder sled features like its mountain handlebar.

You know abut the Viper series of sleds. That line up remains pretty much the same except for the annual addition of bolder and newer graphics. There is one key new Viper model, the Viper BTX LE. This comes about because Yamaha marketing research discovered that upwards of 60 percent of its Viper MTX sales were actually made in the East and at sea level! You can view the BTX as a model specifically aimed at those buyers as it features a 153-inch long Back Country track with 1.75-inch lug profile, a mountain-style handlebar, mountain skis, a 40-inch ski stance and complement of Fox Evol shocks.

Other than the new BTX, expect the Viper series to retain its product niches of: 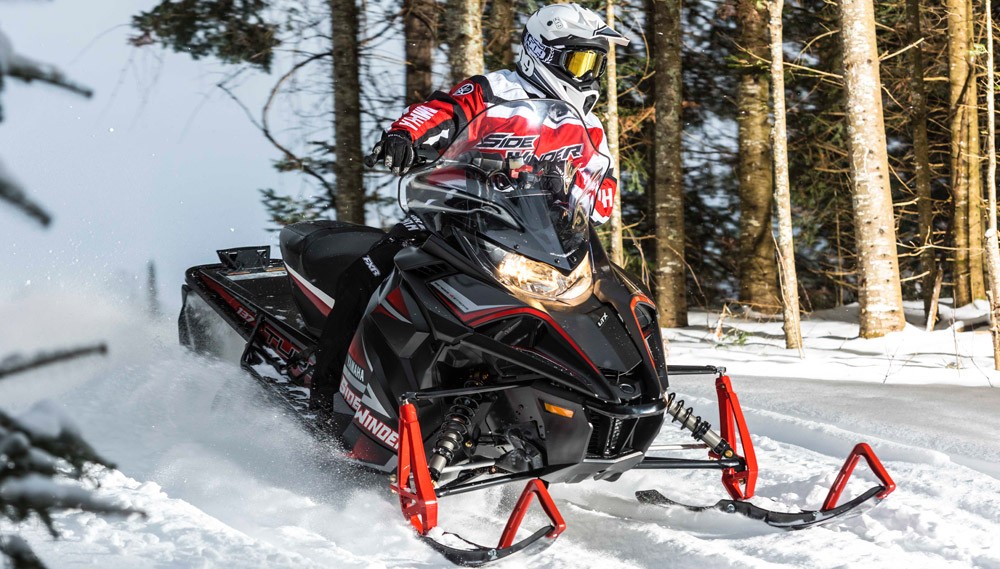 If you look at the Viper line, realize that Yamaha decided to go big with its all-new Sidewinder turbo models. You now have a choice of “go big or go home” power options in each of these model niches. Or, simply view the Viper as the 600 class and the Sidewinder as the 800 class. That’s how Yamaha looks at it.

Don’t misunderstand our somewhat casual introduction of the Sidewinder. The sled is put together in Thief River Falls, Minn. by Arctic Cat, but this is as much a Yamaha product as a Cat one. Fitting the new 998cc Genesis turbo into the Sidewinder configuration required new body panels to accommodate room for the turbo, the necessary added cooling components, and other styling and mechanical improvements necessitated by adding the more powerful engine. Of course, Arctic Cat with its 9000 series of turbocharged models has experience with making room for a turbo and accommodating upwards of 180 horses to the track. It came in handy, but instead of being tall like the outgoing one-liter Suzuki four-stroke twin, the new 998cc Genesis turbo is wider and most likely more powerful across the rev range.

You’ll find a full complement of Sidewinder models to include the short track RTX, the LTX, the XTX, an STX DX with saddlebags and 137-inch Cobra track, LE and SE versions of the new BTX model, and serious hillclimbing, powder playing MTX SE with a 162-inch Powerclaw track. 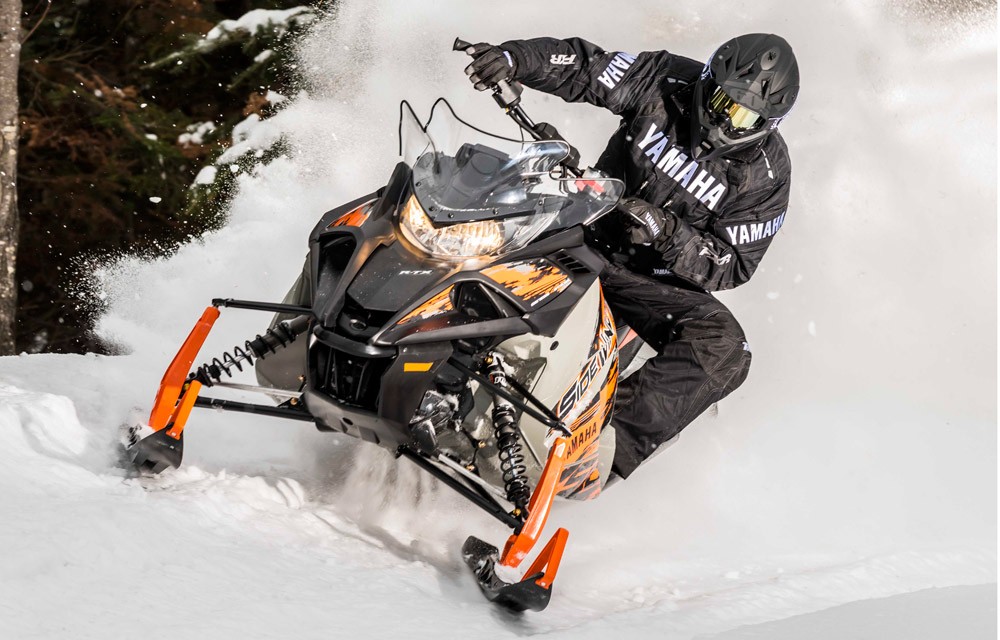 Now you know that the turbocharged Sidewinder is the 800 class Yamaha. If you are familiar with how Yamaha does things, you know that it simply grab an engine from the parts bin and slap a turbo on it. With its prior experience with both trail and mountain turbo kitted 1049cc triples, Yamaha engineers knew that they wanted a turbo experience so smooth and quick that it would feel seamless and predictable at your throttle thumb. Instead of opting for a more conventional single throttle body application, Yamaha decided on using three separate throttle bodies to enhance performance. The turbo comes from IHI and is an IHI RHF5B model that features a nickel alloy turbine body, ceramic ball bearings and an Iconel turbine blade assembly. The design specifications call for extremely quick response to exhaust gas input and stable, consistent power output.

Although new to snowmobiling, the IHI turbo has a history of adding performance to automotive products from General Motors, Ford, Renault, FIAT and VM Motori. These highly regarded turbochargers have found application in the automotive, heavy truck, marine, construction machine and industrial engine markets. Specifically, the RH-series turbochargers are known for excellent performance and reliability.

The turbo equipped Yamaha Sidewinder uses a unique 3-into-1 cast steel manifold that was designed by Yamaha to match the sled’s chassis and turbo layout while creating the shortest path possible to the turbine. You’ll also note that Yamaha was in charge of engine tuning the Sidewinder, whereas Arctic Cat managed intake and exhaust specs on the Viper triple. The turbo engine’s electronics are controlled via a Yamaha Mitsubishi electronic control unit (ECU) that uses nine sensors to gather and compute data in conjunction with predetermined memory mapping. These sensors read and control:

Although you should use premium fuel, the Genesis turbo ECU will retard ignition timing and adjust boost pressure to prevent engine damage if you can only find 87 octane fuel on a trip. The compression ratio is 9:1 for the snowmobile engine compared to the more aggressive 11.3:1 ratio used in the YXZ1000R.

Of course, adding a high performance engine requires a clutch system that can accept the upgrade in power. To that end Yamaha designed a new primary clutch that accepts the existing YVXC weights and added a reverse cam wide-ratio roller secondary. This new YSRC secondary features new sheaves with different angles and cooling fins to provide wider ratios and improved cooling.

The main criteria of the all-new Sidewinder is to offer a high performance Yamaha with instant throttle response, exciting corner to corner acceleration and handling, major torque at low rpm and power that smoothly takes you to the fringes of your bravery. You will have 19 Sidewinder models to choose from, which means there should easily be a high performance 2017 Yamaha Sidewinder for you.

No longer can Yamaha claim to be all four-strokes. 2017 not only marks the return of a two-stroke sled to Yamaha’s North American offerings but the return of the VK540, a model redesigned by Yamaha Russia and now re-appearing to meet serious utility demands.

The 2017 VK540 features a 540cc Yamaha fan-cooled two-stroke that has been “cleaned” up to deliver a 25 percent increase in mileage (versus the previous model) and meet or exceed current EPA emissions.

The Apex, Vector and Venture models reflect minimal changes from model year 2016 other than some graphic updates.