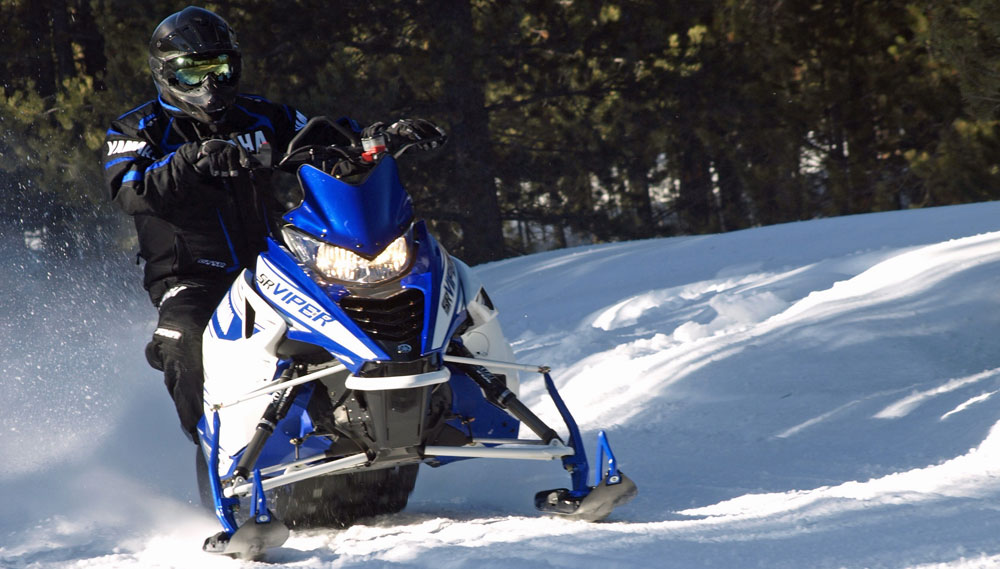 This friends with benefits hook-up is paying off

You’d have to think that the hook-up between Arctic Cat and Yamaha is working. These friends have unique benefits to offer each other. Arctic Cat didn’t want to spend the big bucks to develop an all-new performance four-stroke to replace the aging Suzuki, which powered everything from utility models to the 175-horsepower turbo sleds. And Yamaha had nothing but four-strokes and an aging fleet of core sleds that are very good, fast enough, certainly durable and reliable, but simply not perceived as being sporty enough.

Pity the Yamaha Apex, a true wonder in modern snowmobiling. It is unique; the first and only production snowmobile bred with a high performance four-cylinder, four-stroke one-liter motor. Yamaha’s Apex offers features never seen before in all of snowmobiling. It pioneered the use of electronic power steering, which, of course, cynics would say was needed to make the heavy sled feel lighter on the trail. They neglect to point out that EPS also reduces the rough edges of trail feedback that can tire out a rider on a long journey. The fact that Yamaha EPS eliminates some of the harshness from the steering and is designed to offer more assistance at slow speeds and less at top end tends to shortchange the advantages of the system. But, yes, it does add weight, which the Apex doesn’t need. 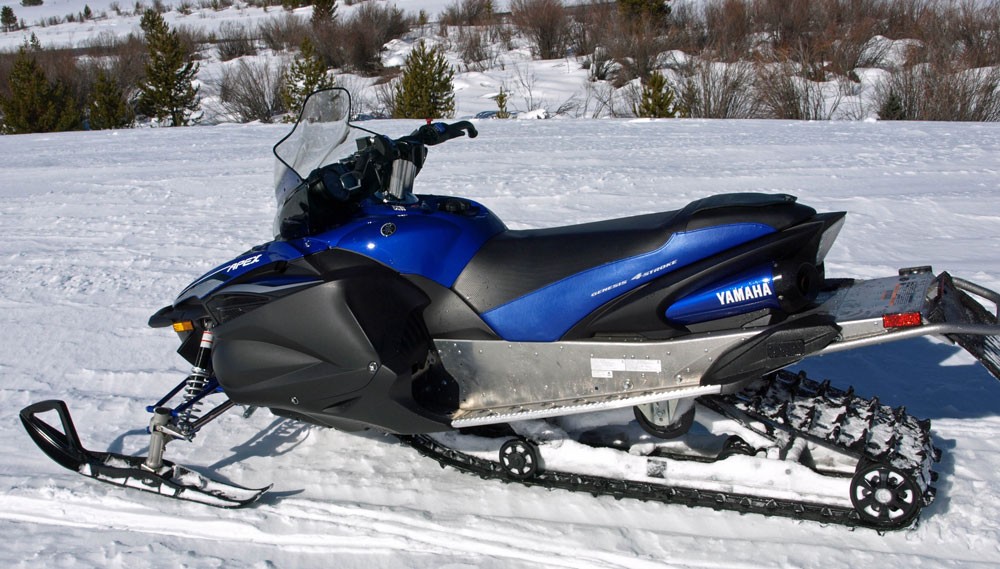 The Apex is a unique core Yamaha model that offers the only four-cylinder production powerplant as well as power steering.

But, so too, does the proprietary Yamaha EXUP system that relays electronic messages from the engine’s computerized system to the exhaust to manage maximum performance at wide open throttle down to drive away. A longtime component found on select performance Yamaha motorcycles, EXUP noticeably improves overall Apex performance across the rev range.

With all of this positivity surrounding Yamaha’s Apex, you’d think it would be an all-star and a top seller. Well, it is a premium sled that carries a premium price tag. Of course, with the advent of the new Yamaha Sidewinder and its 180-horsepower turbo engine, the Apex X-TX 1.75 LE at US$15,549 (CA$17,899) is no longer the most expensive sled in the Yamaha line. That honor falls to the 2017 Sidewinder B-TX LE 153 at US$16,949 (CA$19,699). Even without the new Sidewinder to cast a shadow over it, the Yamaha Apex had already faded in sales. In the 800cc sport category, four-strokes like the Apex compromise a mere six percent of the market. Of that, the Yamaha Apex represented less than one percent of the total, being outsold by Arctic Cat’s 9000 turbo entries. Ouch! 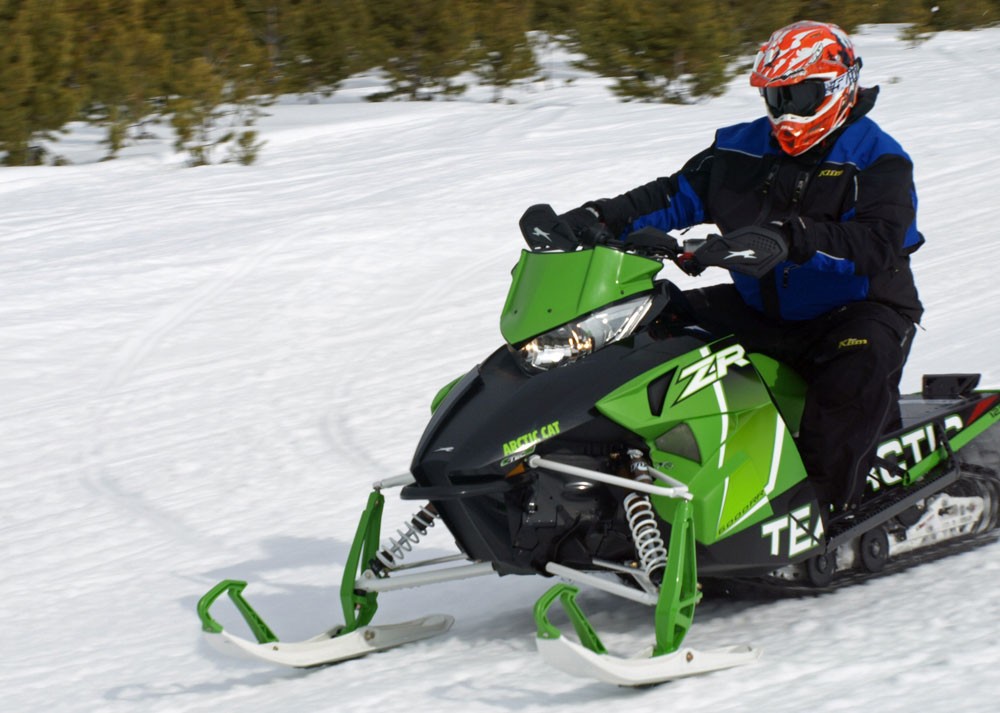 In the Arctic Cat partnership, Yamaha gains the ZR chassis known for its handling.

From Yamaha’s viewpoint the Arctic Cat connection is terrific, for now. Right from the get-go, it was a win for Yamaha. The company gained a buyer for a number of “box” 1049cc Genesis four-strokes, which Arctic Cat used as a replacement for the Suzuki twin. With a limited input from Yamaha, development fell to Cat to fit the wider triple into its existing Procross and Proclimb chassis. Cat engineering took care of the intake and redesigned a side exhaust as Yamaha owns the patent for the under seat, rear exiting design seen on the Apex, Vectors and such. Just as Arctic Cat gained a respected and proven engine to replace the Suzuki, Yamaha came away with the Viper series of performance sport sleds, something for which Yamaha dealers clamored. Win, win, for Yamaha. A win for Arctic Cat, but, perhaps, initially not as big as what Yamaha gained.

About the same time as Yamaha and Arctic Cat were putting the agreement together, Yamaha was preparing the way for an entirely new high performance drive system. While Yamaha may have much deeper financial pockets than Arctic Cat, or all of the other sled makers for that matter, the company has a board of directors and does have to make sound financial decisions, meaning that popping for a new engine couldn’t be just for snowmobiles. If you took Yamaha’s market share and combined it with Arctic Cat, you might get to a market position ranking of number two in the current world market of 150,713 sled sales. That probably wouldn’t get Yamaha management too excited, but if you could share the new engine with another powersport entity that could make such a move palatable. 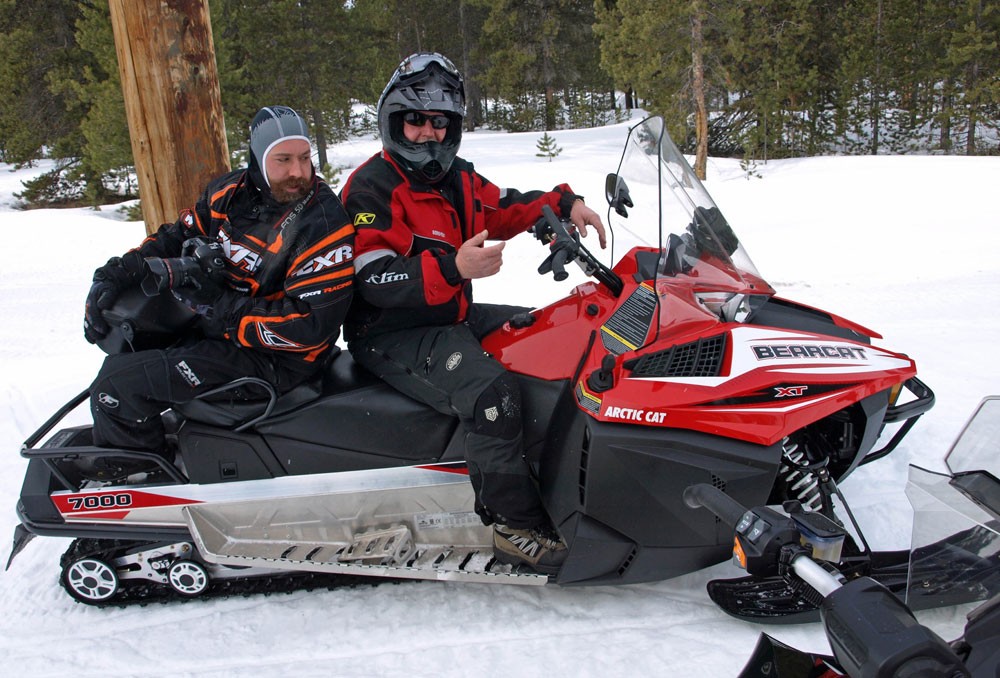 Yamaha’s 1049cc engine powers a variety of Cats, where its known as the 7000 series.

So, while the all-new 998cc turbocharged high-performance Genesis four-stroke triple was designed for both Arctic Cat and Arctic Cat-sourced Yamaha snowmobiles, the base normally aspirated 998cc triple powers Yamaha’s newest side-by-side four-wheeler, the US$20,000 YXZ1000R. In this scenario, Yamaha could spread development costs, which likely means that we haven’t seen all of the products that may end up with 998cc triples in their engine bays. After all, as ATV riders get beyond 50 years of age, they are more likely to switch to a Side-by-Side unit for comfort and companionship. We won’t be surprised to see the torque-laden 998cc triple trickle down to future Yamaha Viking, Wolverine or even Grizzly type four-wheelers. 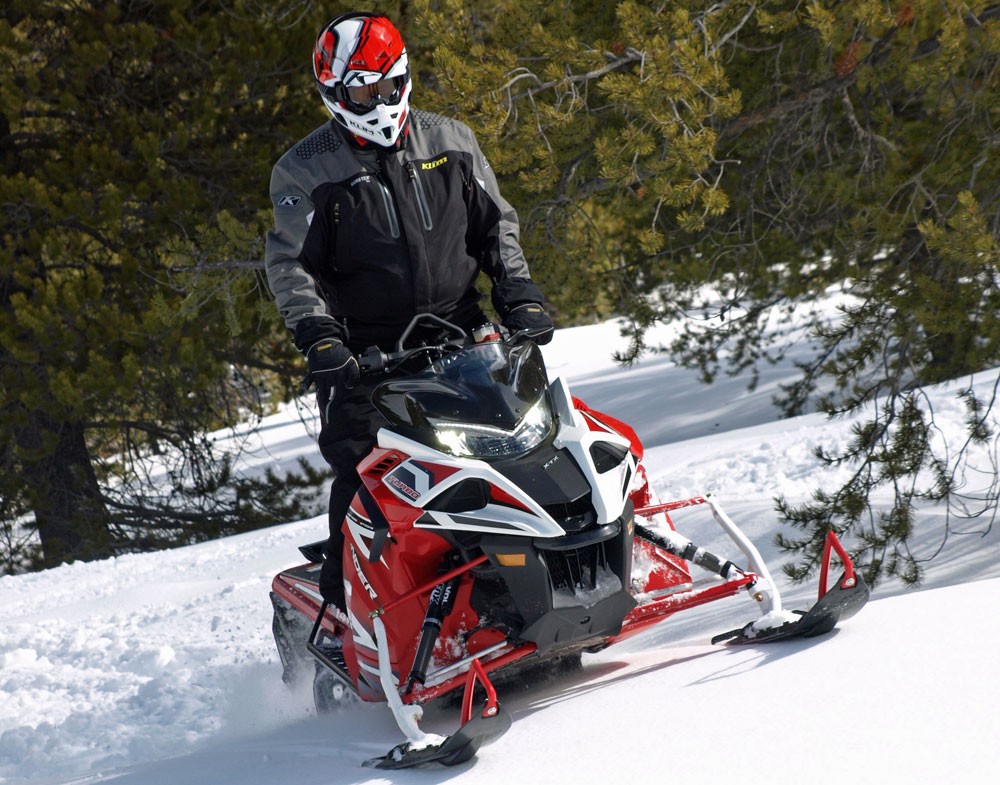 The Cat-sourced platforms needed to be revised to fit the 180hp turbocharged Sidewinder powertrain.

To date the Yamaha/Cat connection works. Arctic Cat supplies an existing platform. Yamaha supplies the power. Both companies manage their own differentiation. So far the product stylists have been masterful with offering up differences for two brands offering very similar products. Mechanically the key difference seems to be the clutching and the idiosyncrasies of each. Yamaha uses its own clutch design, including a new heavy-duty YSRC roller secondary that was effectively expanded to allow “overshift” to accommodate power at full throttle runs. Arctic Cat engineers worked with its partner, Team Industries, to evolve a Rapid Response II drive clutch to harness the new turbo. As for idiosyncrasies, Yamaha favors a limited amount of engine braking feel whereas Cat likes its four-strokes to freewheel like a two-stroke sled.

Still, though, as we look at the pieces and anticipate Yamaha’s 50th anniversary in the snowmobile business, we can’t help but wonder how this Yamaha/Arctic Cat connection continues. Yamaha has successfully managed to give its North American snowbelt dealers two big reasons to retain the Yamaha snowmobile line, even if they are assembled at Arctic Cat’s Thief River Falls, Minn. factory. Should we be thinking we’ll see more joint partnership coming? 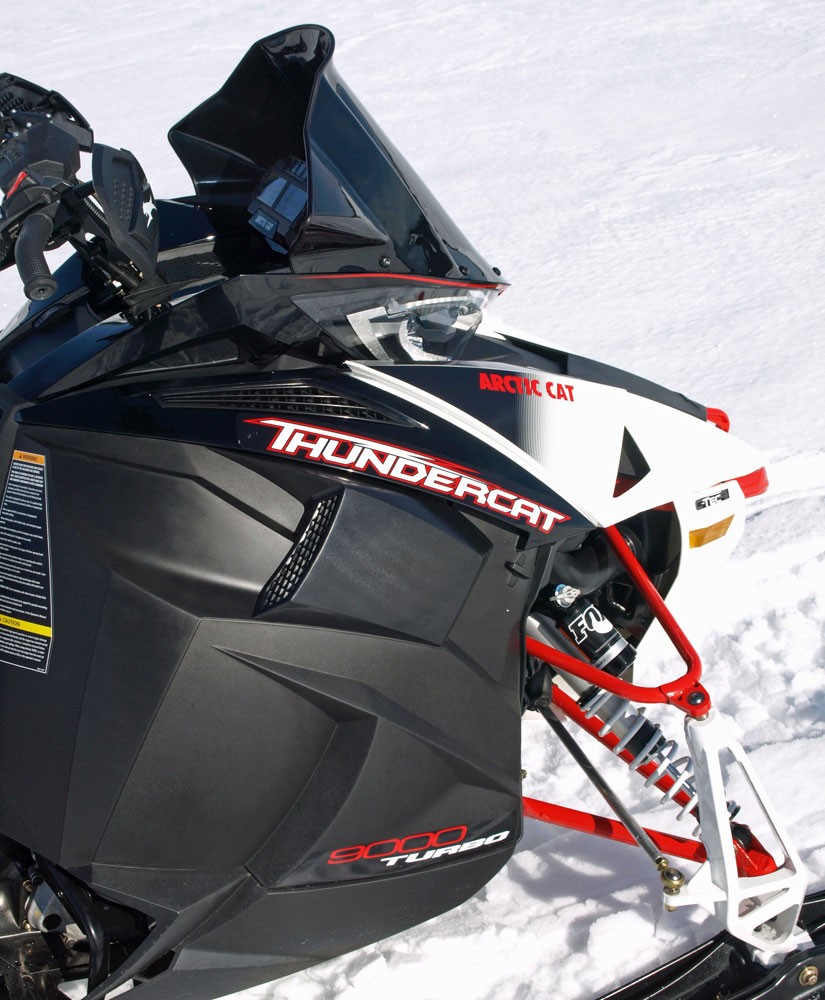 First of all, Yamaha is a proud company that can produce outstanding power products. Is it enough to celebrate a 50th anniversary with a 2018 “me-to” product that uses a dynamic Yamaha engine but little else of Yamaha manufacture to make it stand as statement to Yamaha’s 50 years of snowmobiling?

Frankly, we don’t think so. The friends with benefits works just so far. Whether Yamaha supplies Cat with engines and, conversely, Cat produces platforms, we look ahead and see hints that Yamaha is not out of the sled business as a sled maker. The Cat connection has helped Yamaha reinvigorate interest in its brand, but the core of Yamaha-produced sleds remains uninspiring, regardless of how reliable and durable they are. At the very least, we would expect Yamaha to come at its 50th anniversary with a product symbolizing the bests that Yamaha has to offer. The 998cc turbo package is a starter. There are other pieces that Yamaha has that could be used in a killer 2018 50th anniversary model. The benefits of power steering are valid for on-trail handling comfort and we expect that a sled specifically designed with EPS in mind would be balanced to make it an integral part of the performance package. Indeed, Yamaha is also quite proud of its unique performance dampers, which, too, could be effectively integrated into the sled’s design from the start. And, lest we forget, Yamaha is an innovative company that developed its own Deltabox underhood framework that holds the EPS and allowed the engine to be canted rearward to center mass and enhance handling. 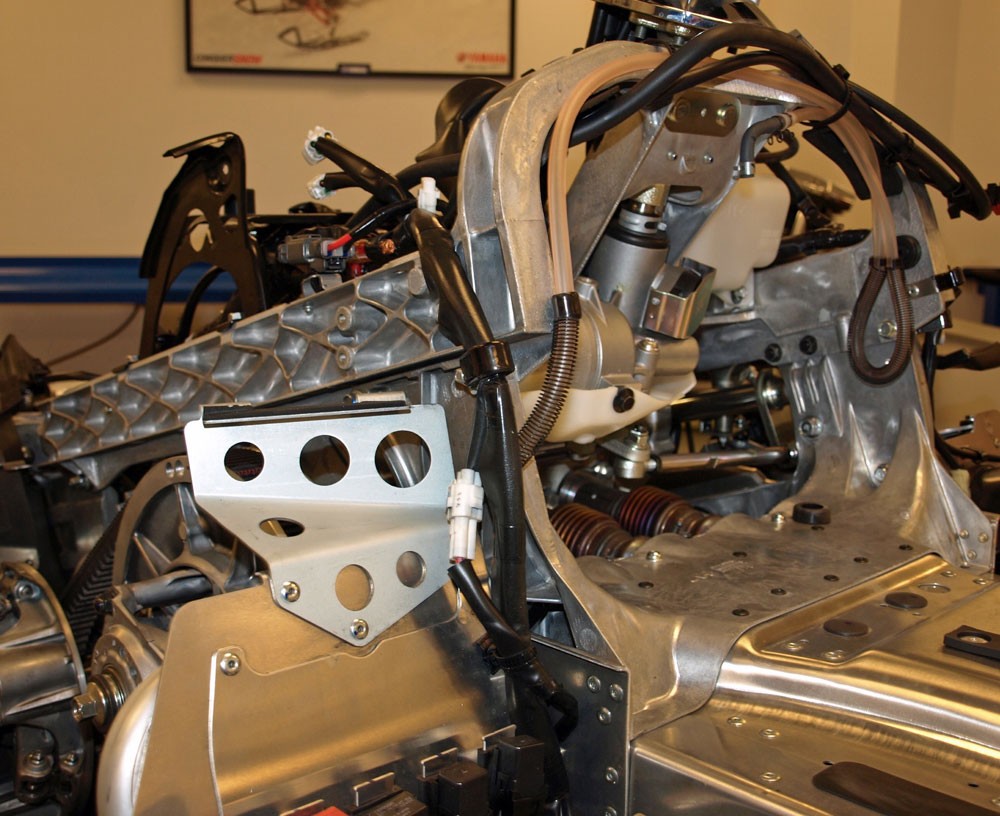 Yamaha is an innovative company that developed its own Deltabox framework that holds the EPS and allowed the engine to be canted rearward to center mass and enhance handling.

To date the Yamaha and Arctic Cat hook-up works well. Both companies seem to play well together and each company has learned from the other to the betterment of us consumers. Will this relationship last? We can’t see why not. Arctic Cat is invested in snowmobiling and Yamaha offers the strength and association of a well-known and respected brand to enhance Cat long term. Yamaha gains a ready outlet that gives them extra sales of its snowmobile-specific engines and an association with a snowmobile brand with a heritage of race-bred handling and on-snow performance. For Yamaha we expect the investment to be less than if the company built up its own fleet of sleds as it has in the past. Economically we expect the arrangement works very well for both companies.

As for model year 2018 and Yamaha’s 50th anniversary in snowmobiling, it’ll be interesting to see what comes about – a pronounced Cat/Yamaha hook-up or a unique and innovative new Yamaha to remind us all that Yamaha is its own brand and not merely a friend with benefits.