Arctic Cat punched out a four-run grand slam when it introduced its M series in 2005. Getting to that point had been a struggle as Arctic Cat lost some ridership while figuring out the mountain segment and just what powder riders really wanted. The Thief River Falls, Minn. company’s 900 1M and 900 King Cat turned Arctic Cat onto the right path and the M Series accelerates Cat’s movement.

Those who had migrated away from Cat are migrating back to throttle Team Green’s mountain sleds — along with picking up some defectors from the other colors. Arctic Cat’s strong running M7s with their smaller 700cc displacement Twins held their own against the competitors’ 800s. Even with that success, by 2006, mountain riders wondered: Was there an M8 in Cat’s future? It was a legitimate question as the dominant muscle in the mountains came from 800cc power.

The long awaited answer, the M8, came in February 2006 with the media introduction to Cat’s ‘07 line up. But Arctic engineers had a surprise — an M with many digits on its hood — the M1000. The new sled drew gobs of attention, pulling some “Oohs and Ahhs” from the much anticipated M8, as both made their debut in West Yellowstone, Mont. A powerhouse in the mountains, Arctic Cat’s M1000 has the highest available horsepower of any mountain sled on the market.

First impressions were great as we wrapped our hands around the new big-bore metal from Arctic. Four years later, the M1000 remains top of the food chain in Arctic’s mountain arsenal. My brother, Snowmobile.com Western Editor Matt Allred, vehemently defends his position on the M1000: “My all-time fave mountain sled, especially the 153, but the 162 is just as suh-weet.”

The 2010 version of Arctic Cat’s M1000 features changes which include a new blow-molded seat that is 3.5-pounds lighter and three-inches taller than the previous year’s seats (that excludes the optional BOSS Seat offered as a Spring-only option for model-year 2009 Sno Pros). The taller and tapered design (tear drop from fuel cell to tail) improves rider transition from sitting to standing, and when swinging a leg over the bun cushion during those critical cuts through thick tree stands on a sickly slope.

The new seat also features an ample-sized waterproof storage compartment. It seems as though the other manufacturers have moved away from building storage into their sleds; but with Cat, we find the M1000’s large seat-rearward compartment wanted and needed. We appreciate this feature.

Other changes for 2010 include new skis that are a half-inch wider and feature a stiffer and deeper keel for improved cornering. Arctic claims each ski is 1.9-pounds lighter than the 2009 ski. 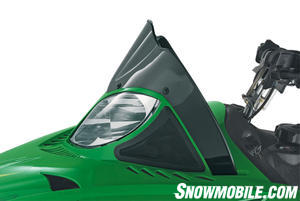 The hood’s vents over the big Twin 1000cc motor are now filled with Frog Skinz, a breathable nylon-like material that has microscopic perforations. This is an effort to keep unwanted snow and moisture from entering through the hood — and ultimately — onto the motor and clutches. The Frog Skinz material works very well for this, but for tree-bashing mountain riders, a rogue tree branch could puncture the Skinz. Arctic Cat will offer extra Skinz in a packet of three for around $20.00.

For 2010 the M1000 is only available in the Sno Pro package and in one track configuration, the 162x15x2.25. Arctic Cat said this change reflected the company’s desire to streamline manufacturing and the fact that 162 Sno Pro represented the majority of M1000 models purchased in the West. It appears those who target the M1000 like the good stuff.

The 2010 Sno Pro M1000 will be shipped with Fox float shocks on both the front and rear suspension. The float rear skid works well with the Fox Floats, which alleviate the need for heavy springs and delivers a light weight and durable rear skid. The AWS VI double wishbone A-arm front suspension with Fox float shocks does the job for the M8, but on the heaver M1000, at times, the Floats seem to “take a set” to a slightly-collapsed position. When I notice this on a M1000, I verify if the Floats are low on air pressure, but more often than not, the Float shocks are at the proper level. It seems to be the nature of the beast on the M1000. My recommendation for Cat would be to forgo the weight savings of the Floats and go with a stout spring-loaded shock. That is my personal preference.

The proven 999cc power plant is a good motor and remains unchained for 2010. Fueled by two 50mm throttle bodies and batteryless electronic fuel injection (EFI), the 90.3 x 70 bore and stroke twin-cylinder two-stroke mill delivers 162 HP at 7,250 – 7,300 rpm, and a whopping 116-to 118-foot-pounds of torque. These numbers make the M1000 the sheriff when it comes to two-stroke mountain sleds. 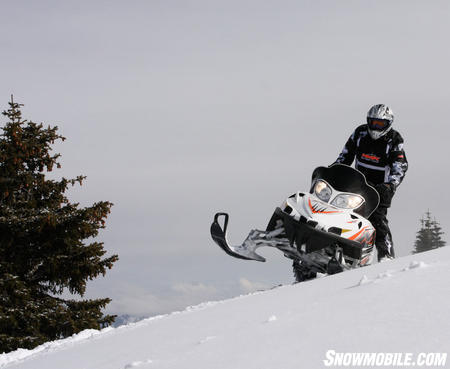 When riding in the deepest powder nothing will even stay close with this M1000.

From its beginnings, Cat’s design and development team created the M-chassis from the ground up (not a converted trail sled) for mountain riders by mountain riders. Since its inception in 2005, the M chassis continued to evolve, with its greatest changes occurring in model-year 2009 when Cat engineers overhauled the chassis and pulled 22 pounds of weight from the M’s body. Changes included a redesigned and bobbed tunnel, which houses Cat’s new proprietary Power Claw track, which delivers traction as if 15 or more horses were added to the motor. For the driver, telescoping handlebars were added on Sno Pro models only. These bars are what I consider one of the single-best improvements on any snowmobile since electronic motor reverse, which was the first single biggest improvement for mountain sleds. The bar telescopes to 12-positions in 3/8-inch increments.

At this 2009 model-year, Cat pulled most its weight off the M1000 by dropping its electromechanical ACT Diamond Drive reverse and adding electronic reverse, which is the exact system Ski-Doo and Polaris uses (RER and PERC respectively).

The 15-inch wide Power Claw track combines the best features of Cat’s Attack 20 from the King Cat and early M7 years and adds the aggressive traction concept of a finger track. The track is an 80 durometer, three-pitch track that has negative 20-degree paddles (just as the Attack 20 track had) and has traction towers that tilt a positive 20-degrees.

With its 162-inch track and 160-plus horsepower, the M1000 offers ample grunt and deep snow agility.

The traction towers blend with the paddles on the paddles’ outer edge and also near the track’s edge. Weighing the same as the Challenger track, this unit’s opposing paddles and fingers give it undeniable traction, flotation and hookup.

In 2009, and carried through to 2010, the bobbed tunnel covers the rear skid’s length and no more, giving the 162 the look of a short 153. For weight savings the tunnel is cut out to expose the rear heat exchanger from the top. The M’s running boards curl up the end, which means less tunnel weight and minimal snow build-up.

At the rear end, the rear axle uses two-wheels, which sit inside the slide rails. This reduces weight and gives the track bite when it is poked steep slope for a cross cut. You’ll note that Cat machined and cut the slide rails to accept ice-scratchers. The manufacturer also drilled the rails’ plate and narrowed the limiter straps to further reduce the rear skid’s weight.

This past March in Grand Lake Colo., we had a one-on-one chance to form rider impressions. Since the M1000 remained virtually unchanged for 2010, other than the new seat, we found ourselves comfortable on this familiar ride. The seat seemed a bit short on first look, but it didn’t take long to learn this was the improvement we’d asked for. For a stock seat this one is a keeper. The tall tapered design fit our Idaho farm buns well, helping us move from a sitting to a standing position and back. Furthermore, the short design does allow a rider to easily swing a leg from side-to-side.

Down the trail the M1000 is a powerhouse.  As far as rider comfort on rough trail, the M is what I would call “firm in its ride,” or in other words a bit rough, but always predictable. 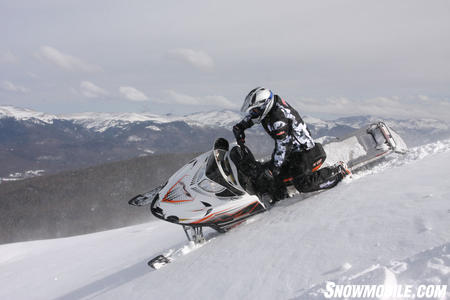 The M1000 is is a pleasure to ride in the steep and deep backcountry with a chassis that makes it easy to sidehill.

Arctic refers to its M series as “Expert Grade” mountain sleds. We’ve always been a fan of how the M handles in the steep and deep. When it comes to climbing, sidehilling — both up or down hill — or performing any serious mountain maneuver, the M1000 and its torque-filled motor have the power and agility to get the job done.

Since the 2005 intro of the M series, we’ve long-term-tested no less than eight Ms as of date and have experienced zero motor, clutch, chassis, or suspension failures. Take that as a compliment to Arctic Cat for building durable mountain sleds. 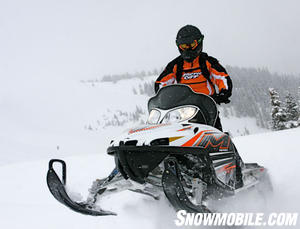 We have also found the Ms to be easy starting, be it a cold or hot motor, this even so for the big 1000 motor. The over-sized pull starter helps in this area.

The biggest advantage the M1000 offers over an 800 is torque. The big one-liter mill delivers 116- to 118-foot-pounds of torque and that low-end grunt is very noticeable, especially when boondocking or sidehilling through the trees. It’s no secret most mountain riders modify their sleds and this big mill loves motor mods. Several companies offer a single-tuned exhaust with these single tuners increasing the 1000’s horsepower by 20 or more. An additional benefit to the single tuned exhaust is a hefty weight loss — in the mid teens — while maintaining near stock sound. This horsepower, and torque gain, coupled with a weight loss, transforms the M1000 into a vicious runner.

If you are the type of guy who likes the premium stuff, the M1000 will not disappoint as it retains the top motor for all mountain sleds. The monster 999cc twin with electronically-controlled 50mm throttle bodies is a master of torque and has draft horse muscle. It pulls. Yes, the motor is heavier than the 800, I mean like, duh, but with the torque this motor produces coupled with the lighter SnoPro chassis, oh my, what a ride.