Arctic Cat continues to take the original M-Series, which began as the M7, and massage its underpinnings. After the Snowmobile.com mountain test team pinched and squeezed the upcoming model year 2010 M8 at Photo Shoot 2010, Grand Lake, Colo., we felt it leaps ahead of the 2009 M8, just as the 2009 hurdled past the 2008 M8.

The 2010 M8 retains all the enhancements the 2009 introduced, but comes with the biggest critic-buster this company can deliver – horsepower. Historically, the M8 had no bragging rights for ponies under the hood, but now, let the boasting begin.

Though the M8 Sno Pro is a pound or two heavier than its XP Summit rival, it now leads the XP Summit and Polaris’ 800 Dragon in horsepower. It is no longer the underpowered lightweight, but the juiced-up mountain Cat the Thief River Falls, Minn.-based company should have produced eons ago. But, here we are. 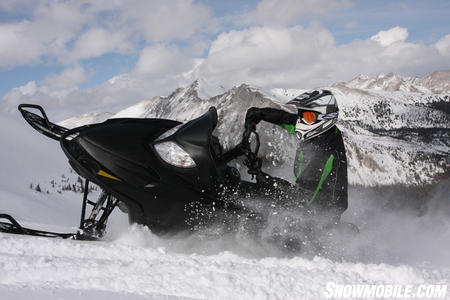 The Mountains near Grand Lake Colorado became a beautiful backdrop for our snowmobile evaluation. The engineers at Arctic Cat made improvements to the 800 motor, increasing its horsepower by 10 percent.

So, regardless of the M8 model – standard, Sno Pro and HCR – the new Cat-designed and Suzuki-built H.O. belches out 160+ horsepower. Some independent dyno shops report that on a hot motor and pipe, 165 to 167 horsepower is the norm. Suh-weet! Yet Cat comfortably claims 160; they are the kings of conservative; Sean Hannity would be proud. 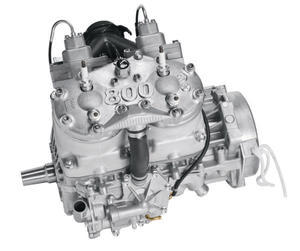 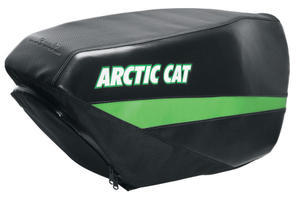 Let’s understand this motor. According to Cat’s engineers, the H.O. (for High Output) motor’s crankshaft is 4.3-pounds lighter than the previous year’s 800. With less rotating mass, the spool up time is quicker. A new exhaust system, a different piston and not-so-mild cylinder ports contribute to the increased horsepower. The motor uses Cat’s electronic exhaust valves (Arctic Power Valves – APV), its dual spark plug design, its Exhaust Pipe Temperature Sensor (EPTS), and also features reed petals on the inducted side. All said and done, the H.O. has approximately 10-percent more horsepower than the 2009 motor.

Additional weight savings for the “Twenty-Ten” comes from the seat which reduces five-pounds from the already-light platform. The seat — and none-too-soon — is three-inches taller than previous models with the standard seat. Cat’s new seat is also about a half-inch taller than the optional BOSS seat from 2009. For eye-appeal and function, the seat has a teardrop shape.

Continuing, high-temp rollers in the driven clutch extend the rollers’ life. On the hood, new FrogzSkin material that allows air to flow into the motor while blocking snow is used to close off the hood vents.

Now, if you calculate the weight loss in pounds, 4.3 (crankshaft) plus 5 (seat), plus 10 (push button electronic reverse replacing the electro-mechanical) the M8 Sno Pro and HCR should bump the XP Summit as the lightest 800cc mountain sled on the market. Not so. The new H.O. exhaust system, which is the same exhaust system used on the M1000, keeps the Sno Pro and HCR near 2009 weights, less a couple pounds. When ponies are built, so are decibels, thus a fat pipe with tons of insulation is needed. But no fear, most hardcore mountain blokes remove the pipe and muffler and install single or twin tuners. When done, the M8 Sno Pro and HCR sneak under the XP Summit’s weight, a fully stock Summit that is, by several pounds.

OK, what’s it like to throttle the 800 H.O.? Stupid fun. The 2009 M8 was about as good as it gets when it came to steep-and-deep boondocking, ravine bashing and tree running. But when racked against an XP Summit or 800 Dragon, the 2009 M8 had some ground to make up. For 2010, that changes. In the competitive steep-and-deep game, the M8 and M8 Sno Pro, with its superb 80-durometer 2.25-inch Power Claw track, exceptional balance, deep-float ability, will, we predict, give the 800 XP Summit and Dragon its tail lamp view for most of the day. This Arctic Cat M8 shows off its new legs, boasting 163 horsepower. Even riding at 10,000 feet in Grand Lake, Colorado we noticed a huge improvement from last year.

Not to be left alone, the limited-build Hill Climb Racer — HCR — in its 153 configuration, spinning the stiffer 90-durometer 2.25-inch Power Claw track, will surely claim its fair share of podiums and, if it performs above that of its 2009 predecessor, the HCR will prove itself as a hot boondocker.

As mentioned, Arctic Cat offers three M8 models: M8, Sno Pro and HCR. The M8, known as “Standard,” can be purchased as a 153 or 162. Likewise, the Sno Pro comes in the 153 and 162 lengths. These two share the same 80-durometer track, seat, ergos, front suspension, rear skid and ski width. The difference between the two lies in shock packages, handlebars and gauges. Up front the Sno Pro uses Fox Float Air. The M8 uses FOX Zero Pro gas internal floating piston (IFP) shocks. The Sno Pro receives the multi-positioning telescoping handlebars. The M8 does not. The Sno Pro has a deluxe instrument pod that displays altitude, temperature, vital engine stats along with speedo, tach and trip meter. The M8 uses the same instrument gauge of yore – tach, speedo and trip meter only. Ski stance for both is an adjustable 39- to 41-inches.

The HCR shares most the components as the Sno Pro, but comes in a 153 only. Its stiffer durometer track is designed for aggressive hillclimbing on a packed course. But, you should be aware, the HCR’s track is as stiff as a Camoplast Challenger track, which is the same track Cat installed on its 2007 and 2008 model year M8s. Armed with that knowledge, the HCR track is quite adaptable to deep snow. 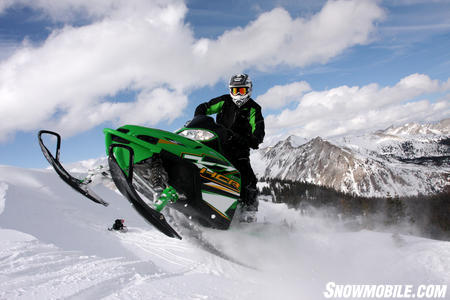 The HCR or Hill Climb Racer became an instant hit among our test crew. The HCR has a stiffer track making it “hook up” better than its M8 siblings.

Continuing, the HCR uses FOX Zero Pro gas IFP shocks, just as the M8. But, it utilizes adjustable preloads via titanium springs. The HCR’s skis are narrower than the M8’s and Sno Pro’s, and have a deeper, more aggressive keel; ski stance is an adjustable 42- to 44-inches. Perhaps the stance is wider than most mountain pounders want, but as light as this sled is, it rolls to its side just fine for a sidehill cut.

Overall, the new sculpted seat is nice. Its fit to the human bun is comfortable and its storage is ample. The new H.O. motor is beefy. Its wide powerband and grunt-filled torque makes the Snowmobile.com Mountain Team wonder how we lived without it. The H.O. spools up nicely and stretches the pilot’s arms.

The M8’s fit and finish is not as clean as the other manufacturers’ products. Now, this is not by much, but, noticeable to the experienced eye. Cat offers an all-black M8 Sno Pro. It is Stealth Fighter looking, but we felt its black graphics (black graphics on black paint) were strange. The no contrast look is, in our opinion, not appealing. It’s a definite matter of taste. 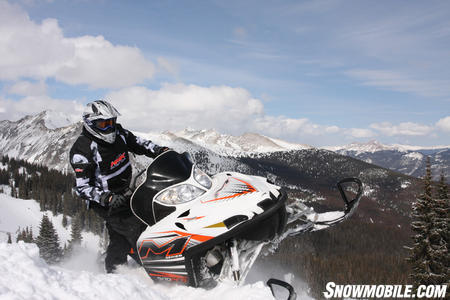 The Arctic Cat M8 is arguably the best all around mountain snowmobile because of its light weight, power, and ease of sidehilling. This Limited Edition M8 quickly became a favorite.

Though the M8 of 2009 was underpowered, the efficiency of the Diamond direct drive system, due to reduced rotating mass, and minimal twist-forces directional changes (driven clutch, to crossover jackshaft, to chaincase) allows the former lower horsepower motor to run — for the most part — with the higher horsepower Summit and Dragon in the powder. For 2010, this efficiency combined with more power will make the Arctic Cat M8 models hard to beat.

One small shortcoming for the HCR: with its wider ski stance comes track lift. Let me explain. If a rider is a wrong-foot forward rider, who, when in wrong-foot forward position, lays a sled on its right- or left-side, when careening off a steep slope, and pulls a wicked sharp turn back up the hill, a wide stance will pick up the tail and wash out the track, killing most of the sled’s momentum. Is this an HCR sales killer? No. But, a bit of knowledge worth considering when deciding between the two M8s, Sno Pro and HCR. Still from our experience the HCR, overall, is a winner.

For 2010, mountain riders have may have reached the peak known as, “This is as good as it gets.” The M8 line has finally and fully evolved to ultimate status. Critics should stand silent. The M8 line should hold the goods as the definitive boondocking, tree running, steep-n-deep mountain sled.