A crossover schooled in powder country

I like the name, “High Country.” That is where I’m from.

Arctic Cat has a plethora of crossover snowmobiles, including two 800cc class variants. One is the XF Cross Country built on Cat’s ProCross chassis, which is a 50/50 trail and mountain snowmobile. There is one XF Cross Country 8000 model, the Sno Pro.

The other crossover variant is the XF High Country 8000, which is built on the ProClimb chassis. This, according to our experience, is a 60/40-ratio crossover snowmobile – 60% mountain and 40% trail, in our opinion. It comes in two different suits, the Sno Pro and the premium Limited. The XF High Country 8000 has M-series heritage from track, tunnel and handlebars.

The High Country featured here is different from the XF Cross Country 7000 in that the High Country Sno Pro and Sno Pro Limited rely on the Arctic Cat-designed and Suzuki-built 794cc batteryless electronic fuel injected two-stroke twin. The big difference between the two crossover snowmobiles from Cat country is chassis and motor.

Westerners like me think somewhat differently than flatlanders when it comes to snowmobiling. Though we are alike in our love for the sport, we mountain riders tolerate trails – they are a means to an end. Yet, there are times when we must cut our frustrations loose on the trails; these are the times when the crossover line appeals to us.

As deep powder crossover snowmobiles come to market, I find myself riding them as often as a mountain snowmobile. I am attracted to its more-than-crossover appeal. Other snowmobiles that hit my happy button are Polaris’ Switchback Assault with Series 4.0 RMK track, and two from Ski-Doo, its Renegade Backcountry X and its deep-powder Freeride 146, which is much like a Summit X. 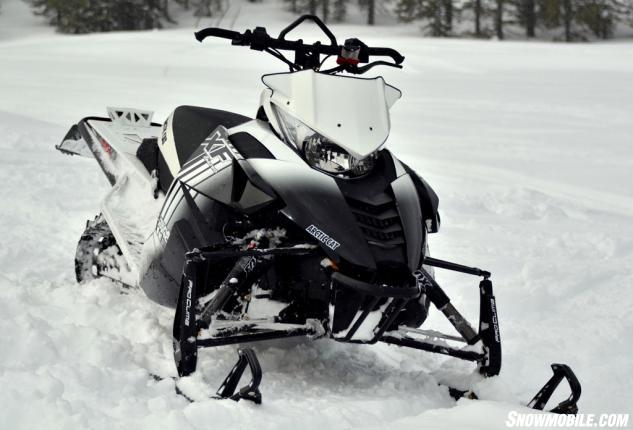 The XF High Country 8000 Limited looks similar to the M8000 Limited in every way, from the telescoping handlebars to the mountain seat. But, its wide ski-stance and short 141-inch chassis give it away as a High Country.

When walking up to an XF High Country 8000 Sno Pro and Limited, you may be fooled into believing it is an M. Its distinct ProClimb seat, telescoping handlebars, two-piece tunnel and cockpit speak M. But missing from the hood is the big “M,” and in its place in a large uppercase font “XF.”

The High Country’s drive clutch is the Arctic rpm-sensing six-post clutch, while the driven clutch is the 10.75-inch diameter Arctic roller cam. These clutches with the crossover jackshaft, chaincase and the radial master hydraulic brake with drilled-out lightweight disc make up the Arctic Drive System (ADS).

Suspending the front end is the sway bar equipped Arctic Race Suspension (ARS) with FOX Float 3 shocks. Its ski is the ProCross, which is suitable for both trail and mountain; however, it’s too narrow for my liking. I like a wide ski with a deep keel that floats the nose. Though Cat says the High Country comes equipped with a mountain ski, I do not support this position. 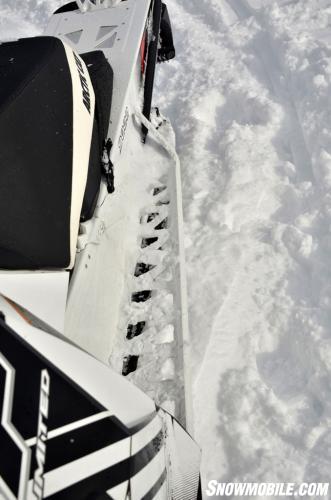 The High Country has a painted tunnel to reduce flash freeze, and M-series runningboards that are stiff and have generous openings to dump snow. 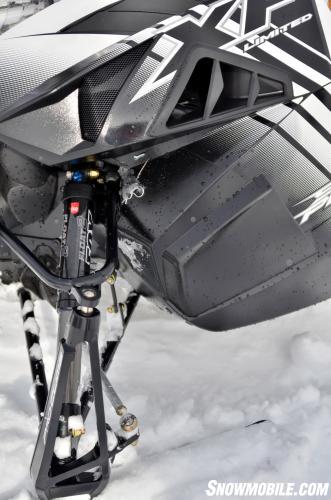 The Limited version XF High Country 8000 has high-end Fox Float 2 shocks that keep the tall spindles and wide-space A-arms in control as trail chops and mountain drops are encountered.

For either standing or riding in the seated position, the High Country 8000 Sno Pro and Limited utilize a vertical steering system with a telescoping handlebar; the exact system used on the M8000 Sno Pro. Drop the bars and the High Country becomes a full-on trail snowmobile – almost. 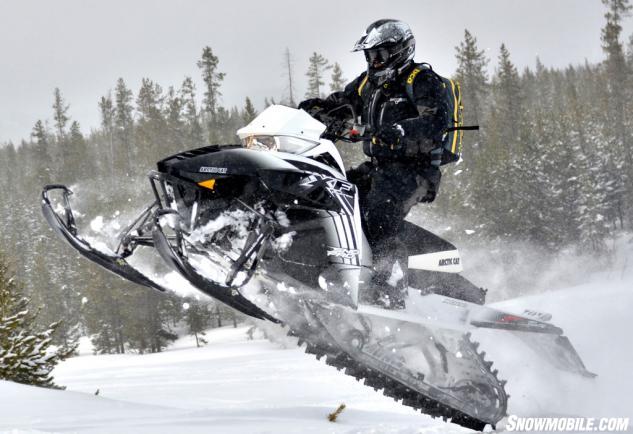 Designed for air, drops, jumps and whatever scares you can throw at it, the XF High Country 8000 is serious about its tasks.

Like the M8000 Sno Pro, the XF High Country 8000 Sno Pro and Limited have a lightweight mountain seat mounted to a two-piece tunnel. This mountain seat is taller and shorter than the standard XF Cross Country seat, which gives the rider a smaller surface area to maneuver a leg and foot when standing to attack a mountainside or a spooky ravine.

On the trail, the High Country is screwed down to the trail. The ARS with lower A-arms that have a 30-degree spindle keep the nose square and flat. We can lift the inside ski when smoking a tight right or left turn, but the nose will drop to its center plane when throttle is reduced and weight transfer rolls forward. It is more secured on the trail than the M.

The XF High Country 8000 Sno Pro and Limited will deliver miles of smooth trail riding. For those of you who desire more deep powder playing than trail, it will give its all. But understand, if you want to be a deep powder and mountain-honking player, you will be limited by the High Country’s track length (141) and its lug height (2.25). Yet, for a 60/40 crossover, it is a sweet deal. For me, I have no problem smoking out a day’s worth of fun on it.