Arctic Cat carefully defines its 2014 Race Replica RR model as having a championship pedigree. That’s more than fair since the ZR 8000 RR does not pretend to be an actual copy of the 2013 Sno Pro 600 Cross Country racer. That’s good!

First of all, while there may be a few hardy trail racers who want and could survive day-to-day life with the actual race sled, that would not be a realistic enough number to make it a profitable exercise for Arctic Cat. The company figured out that the costs of putting a limited build racer on the trails can only be a “win” if that race sled is actually racing on the trails in closed course competitions. However, the pool of racer wannabes who would roll out nearly 14,000 US dollars for a high performance trail sled that came with race sled goodies and Team Arctic heritage is definitely bigger and a much more realistic target market. 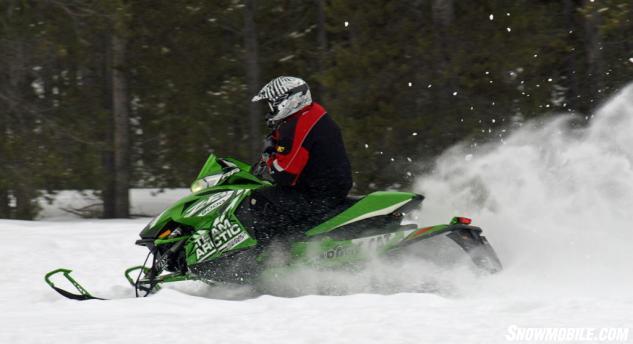 Plus, in some ways, the current breed of 2014 Arctic Cats built around the ProCross two-piece chassis is a replicated racer on its own merits. That tall spindle Arctic Race Suspension came directly from the race department. The chassis geometry draws directly from racing input. The location of the hydraulic brake came from racing knowledge. Make no mistake, all of the ProCross Cats trace their inherent handling and balance prowess to recent racing sleds and race engineering. It’s all part of the Arctic Cat DNA!

Although Arctic Cat gives its 2014 ZR 8000 (and a turbocharged ZR 9000) an RR (for Race Replica) designation, you would be best served to consider the modern ZR 8000 RR as the ultimate Sno Pro version! The fundamental RR truth remains that the underpinnings are ProCross, just as they are with other ZR versions. The RR showcases the race sled’s runningboard rolled edges and reinforcing. The chassis of both models houses a racer version of Cat’s slide-action FasTrack rear suspension. Each features top line Fox Evol shocks with adjustable damping. These shocks use pressurized nitrogen inside an aluminum body and dual speed compression damping to adjust high- and low-speed compression settings. In addition these serious for the snow shocks include patented Fox ice scraper technology (FIST) to eliminate the threat of moisture getting inside the chamber or icing over seals. To help keep the shock operating more consistently, the Zero X design incorporates a remote reservoir mounted piggyback-style. This race sled shock will give the RR rider virtually the same tunability as a Cat racer. 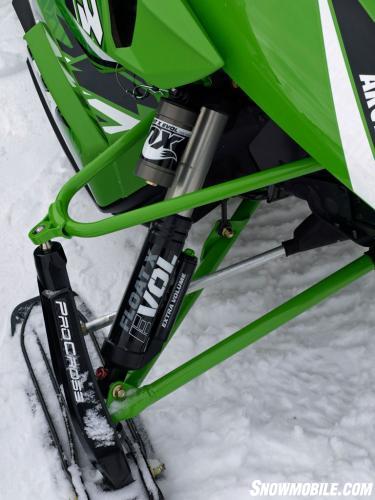 These Fox piggyback gas shocks feature clicker adjustability for compression and rebound that allow similar tuning capabilities to what the racers use. There are differences in seating and cockpit ergonomics between the real racer and the Race Replica as viewed from tail to dash area.

Look for this style shock on both the front and rear suspensions. Enjoy the adjustability as the shock springs enable tuning for ride height as well as allowing you to tune for ride and trail conditions. This sled brings serious joy to the handy and knowledgeable tuner, but it could be frustration and fits for the unknowing. If you aren’t up to fine-tuning your ride, work with your dealer or a serious friend with experience in the black magic art of maximizing suspension setups.

The shocks are race bred, but the track itself replicates excellent trail manners. Where the cross country terrain racer features a two-ply Cobra track, the actual RR brings a fairly standard Ripsaw track to the trail. It measures 129 inches in overall length. The racer’s track is an inch shorter, but both are 15 inches in width with a lug height of 1.25 inches for grip. 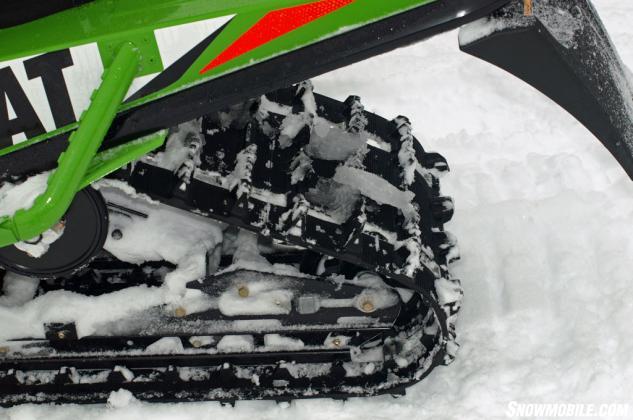 Up front, the tall spindle design on both real racer and race replica controls 10 inches of travel. But the skis doing the grip and grab into the corners are different. The RR comes with “trail” skis with a single runner. The 2013 Sno Pro 600 terrain racer counted top of the line C&A Pro ADX skis for its bite.

You’ll note that the RR seat, while similar to the race sled, is the new for 2014 design with improved ride height and overall comfort. We consider this saddle one of the best in the industry as it gives us a nicely sculpted and secure perch from which to rise to meet bumps or straddle to cruise long miles. The race sled saddle is all business. 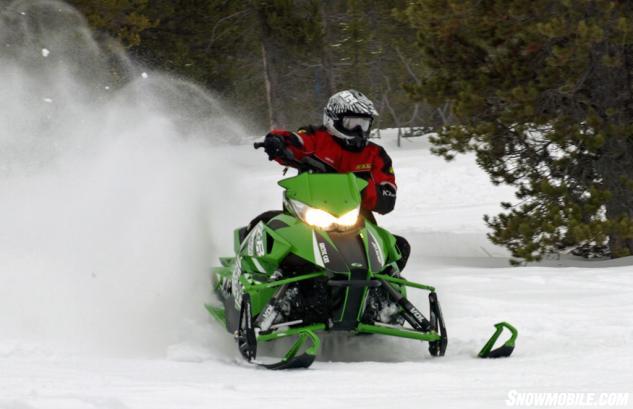 So, too, is the race sled’s underhood powertrain. Don’t misunderstand; the ZR 8000 RR with its Suzuki-built two-stroke 794cc twin throws way more power to the track than the 2013 race sled’s 600 twin. But if you must have close to actual race sled engine displacement, you can now opt for a recently introduced ZR 6000 RR. Shown to the world at Minnesota’s Hay Day event the weekend of September 7-8th, the newest RR comes with Arctic Cat’s own engineered and manufactured 6000 C-TEC2 that measures 599 cubic centimeters and puts out somewhere between 120 and 130 horsepower.

As with all of Arctic Cat’s 2014 RR series snowmobiles, these models give you easily modulated electronic fuel injection. The 2013 terrain racer brought you back to pre-mixing the oil to feed through dual 40mm Mikuni rack-mounted carburetors. That may be de rigueur for racers, but it’s nonsense for modern trail riding. The RRs operate tuned Arctic clutching, including an rpm-sensing six-post driver working with Cat’s own 10.75-inch diameter roller cam driven. The racer worked with an Arctic driver and a TEAM driven, which might win races but won’t win over trail riding fans who want to ride more and tinker less. 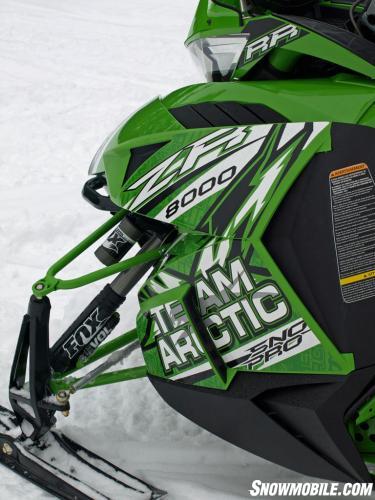 You may have caught on to the Arctic Cat theme here. Bring the best racer traits to the serious rider, but all the while maintain the civility of the Cat, which the company has strived to give its snowmobile-buying public since the 1960s and the advent of the slide rail suspension. The ZR 8000 Race Replica succeeds well. It brings incredible ride tunability, big bump handling, race sled styling and, yet, maintains the EFI ease of starting, comfortable ride position and modern electronics. It goes extremely quick in a straight line. It bites the corners hard and securely. It absorbs the nasty bumps, but can cruise the groomed miles as you want. Plus, this replica sled really looks the part with its in-your-face Arctic green coloring and bold Team Arctic lettering.

Arctic Cat marketers seem to know their public as they give the “look” of the racer in what we would call the serious default of the ultimate Sno Pro. The 2014 ZR 8000 RR lets you have the thrill and pretense of the race sled while allowing the day-to-day ride-ability of a modern snowmobile. It’s kind of like having it all.