Scary fast and wicked powerful about sums it up

This past season we had the use of a first year Polaris Indy 600 SP. You have to smack away the smile from our face as we think of it now. Fun was what we expected. Fun was what we got. Sad was how we felt when we turned it back in this past March.

Despite the doom-and-gloom of sales numbers that paint a somewhat desperate picture for the future of short track (120-inch track length) sport sleds, we have two very big favorites in the trail sport category. They are both 600cc performance models and they are both amazingly similar in design and features. Obviously we like the Polaris 600 Indy SP, but we also like the Ski-Doo MXZ TNT 600 E-TEC. There are some things we like better one from the other, but essentially they were virtually the same sled until recently. 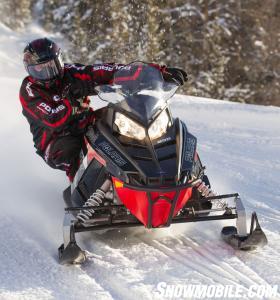 As the value leader in the Indy line for 2014, the 800 Indy SP gives you extreme performance in a lightweight 494-lb sled.

The current 600 Indy SP retails for just under US$9,000 while the 2014 Ski-Doo MXZ TNT 600 E-TEC carries a suggested price of just under US$11,000. In fairness, the extra bucks for the TNT does include the premium rMotion suspension with HPG shocks, which simply means that there can’t be a fair apples-to-apples comparison between the two models.

Now, moving ahead into model year 2014 Polaris retains the Indy SP package as the leader of its Indy “value” brand. But there’s a new heavy-hitter for the trail warrior – the 800 Indy SP. Wow! Let’s just say we thought the 600 Indy SP did a very impressive job, but when you add another 30-something horsepower to that package, which Polaris claims weighs in the same as the 600… well, hang on!

Fortunately differences exist between the Polaris Indy SP and Ski-Doo MXZ TNT. Where the Ski-Doo offers its rMotion adjustable suspension, Polaris opts for a straight rail with fewer suspension adjustments. The reason for this is obvious if you examine the 2014 Polaris sled lineup. You’ll note that in 2014 there are only two Rush models, a 600 and an 800, and they are both premium Pro-R versions. The base 600 and 800 Rush are gone. So, if you want a premium suspension Polaris with a 121-inch track to match Ski-Doo’s rMotion models, you have to move to the Pro-Ride Rush Pro-R. But, looking at the fall off in demand for trail sports with the shorter tracks, Polaris decided to let its “value” brand Indy line carry 800 and 600 twins as sport performance stalwarts. 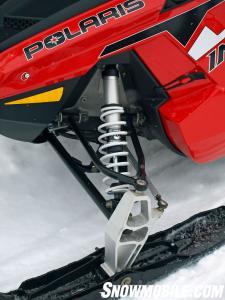 Dual A-arms controlled by gas shocks provide up to 9-inches of travel.

In fact, we expect that Polaris has asked itself if it should even stay with short trackers as the 136-inch models like its Switchback have become the new sport and adventure cruisers of choice for more and more riders. In the past few seasons, many more snowmobilers decided they preferred the advantage and versatility of the longer tracked sleds. The 136-inch suspensions bridge bumps better, plus they put more track on the snow for improved acceleration and braking grip. Some units like select Yamahas with 140-plus length tracks use a turned-up lip at rear of the rail to affect the turn-in of a short tracker for cornering prowess. For Polaris, the Rush and Switchback are the “feature” sleds with the premium Pro-Ride suspension that effectively gives a similar result as Ski-Doo’s rMotion. Of course, you pay for it. The Polaris 800 Rush Pro-R retails for US$11,799. A similarly featured Ski-Doo MXZ TNT with the 800 E-TEC starts around US$12,149. Again, the 800 Indy SP comes in with base pricing of US$10,599.

Bottom line, while the Indy SP is not a Rush; it’s a pretty a good value if you like a throttle full of performance. As stated, the 600 Indy SP rocked the trails and lakes of the Midwest. The 800 Indy SP ups the ante, which is good but deserving of a caution. 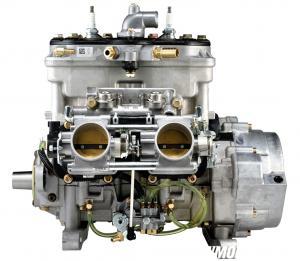 Polaris’ Cleanfire 795cc two-stroke twin makes excellent horsepower quickly thanks to its electronically calibrated semi-direct injection. In the flatlands, we expect the 800 Indy SP will light up its Hacksaw track every time you crush the throttle flipper to the handlebar. That means you could get slippage off hard-packed or icy turns. Frankly you probably will as the 600cc twin got us fishtailing whenever we decided to be aggressive. Unlike the 800 and 600 Rush series that come with taller 1.25-inch lug profile, both Indy SP versions feature the Hacksaw and its 1.0-inch lug height. We understand Polaris’ desire to utilize the shorter profile as it spins better for top speed, but we definitely would have preferred the option of a Rip Saw, at least as a choice for early season buyers.

That notwithstanding, we found our brief test rides of the 800 Indy SP leaving us with a sense of déjà vu. Other than the motor and drive system set up, the sled felt exactly like the 600 Indy SP we had played with during the past season. And that’s all good.

A side profile of the 800 Indy SP shows clean lines and its more conventional coupled slide rail suspension.

When we say that we like both the Ski-Doo TNT and the Indy SP, you need to demo ride both at the same time. They are eerily similar in feel. You sit tall in the saddle with excellent positioning to the handlebar and its controls. Your view over the hood seems reminiscent of one to the other.

We are not going to draw any righteous conclusions between the two brands as the Indy SP proves to be different in its intentions as a value-leader. Although we enjoyed the Rush and its premium accouterments, we fancy the Indy SP more for its “simplicity.” That’s not a slam. Maybe it’s because we are old and ornery and like things to work without overbearing gimmickry. We appreciate the Indy “traditional” slide suspension. It’s basic and honest and it works just fine. Heck, look at the slide-action slide suspension on the Arctic Cats. You don’t find too much gimmickry there, just some easy-to-adjust basic components and off you go. The Polaris Indy rail design mimics simplicity. If you want to tinker and turn dials and finesse settings, opt in for a Walker Evans or a Fox Air Shock outfitted sled. Those designs are great, but we are happy with simple and saving some dollars. The Indy SP suits us just fine. 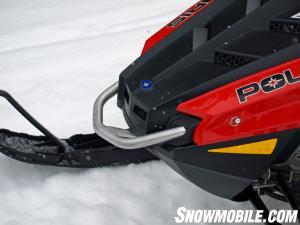 We like the Indy SP for the value features it gives us. There’s a lightweight aluminum construction that encompasses the strength and durability of the Pro-Ride chassis family. The front end housing the drive system and supporting the double A-arm front suspension blends into the overall construction making the sled 300 percent stiffer to permit higher torque loads on the chassis and suspension when riding over the nasties or biting hard into a corner.

With the now proven Pro-Steer ski as standard fare on the SP models, you will recognize a decrease in darting on icy trails and a stiffer, more upright attack when turning into a tight corner.

The Indy SP with the 800cc twin improves performance over the 600 in noticeable ways. As you would expect, it accelerates harder. It has greater top end and it will get into a radar gun’s sites more quickly than any other 2014 Indy. But, like the 600, this top of the line muscle Indy makes for a friendly ride if you go off with a family group as it’s very tractable at cruising speeds. 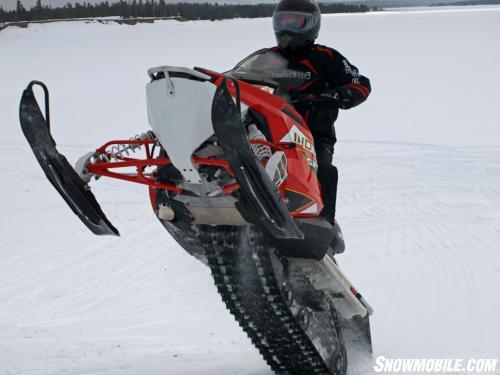 The 800 SP grabs some big air in the Indy tradition.

There are simple things that may go unnoticed, but not unappreciated. We really like the addition of the Indy Pro-Ride saddle with its wider “butt” pad. More comfortable for seated cruising, the seat retains a tapered front portion for pro-active riders who like to stand over rutted out sections of trail. The handlebars rise 3.5 inches with the fixed support. Hooked ends and a heating element extended to the bar ends aren’t features you’ll dwell on, but they add to the all-around ergonomics of this sled.

We liked the 600 Indy SP. We’ll like the 800 Indy SP as well. This version just may be the best all-around performance bargain for 2014. The 800 Indy SP will be powerful, quick and fast in its lightweight 449-pound body. Wicked quick. It’s a wicked good value.