Although each of these three 2014 snowmobiles in this comparison carry different brand logos, they are very similar in on-trail character. Each of these 2014 four-stroke sport cruisers provides ample value and long-term reliability thanks to the modern four-stroke engines that power them. While performance will be similar, there are differences in how the three models achieve trail performance.

Under the hood, each model features a four-stroke engine displacing about one liter. The Ski-Doo MXZ TNT’s Rotax-built triple is the largest at 1171cc. Cat’s Suzuki sourced four-stroke twin at 1056cc is only seven cubic centimeters larger than the Yamaha Vector’s. In terms of on-trail performance, the Yamaha and Ski-Doo triples seem more powerful than the large bore Suzuki twin.

Over the years, we’ve thought the 1056cc Suzuki felt just a bit sluggish, especially when it was all that Arctic Cat had to compete against everyone’s 600cc two-strokes. But whenever we rode the Suzuki-powered Cat we found it did well in getting out of corners and accelerating to top end. Perhaps it was too quiet and simply lulled us into a false sense of its being lazy. 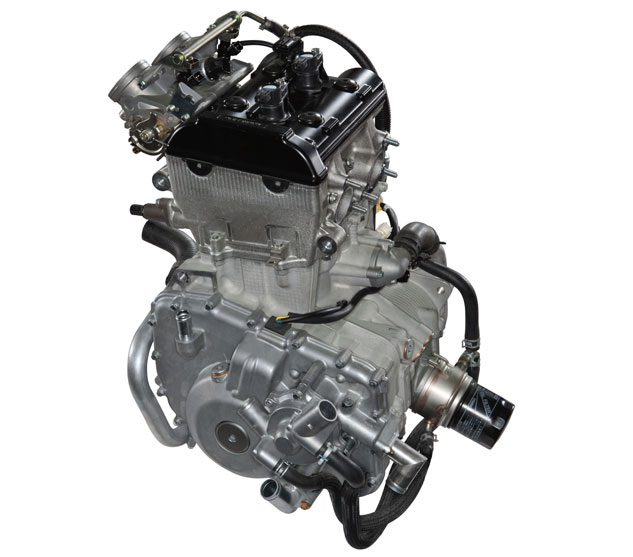 These three sleds are somewhat unique as they kind of, but not really, are supposed to compete against the 600s, like the Polaris 600 Indy or 600 Rush. In point of fact four-stroke snowmobiles have developed their own character, although only Ski-Doo actually devised a unique four-stroke clutching system. The Arctic Cat and Yamaha drive systems come from the two-stroke universe and work quite well. Ski-Doo, on the other hand, designed and evolved its eDrive primary clutch to maximize the 4-TEC 1200’s low-end torque. The current 2014 4-TEC 1200 works with an evolved version of this design, the eDrive 2. It can better handle the engine’s power curve, which comes on at 2500 rpm. The original eDrive remains but is better suited to the lower power of the ACE 600. Its drive off torque kicks in at 2200 revs. Compare this to the two-stroke engagement of Rotax’ E-TEC engines, which engage at 3800 rpm for the E-TEC 800R.

Arctic Cat and Yamaha persevered with a two-stroke style rpm-sensing primary, but since Yamaha is all 4-strokes all the time, it has managed to find a sweet performance spot that allows its Vector performance to rival a moderately powered two-stroke. We have no issues with the final drive of these sleds, as four-stroke drivetrains have come gigantic steps from the clattering first attempts common to sleds like the Polaris Frontier and Arctic Cat 660 four-strokes. All of these four-stroke sport models accelerate smoothly, pull strongly to midrange, but are limited a bit getting to top speeds, most notably the Suzuki-powered Cat. 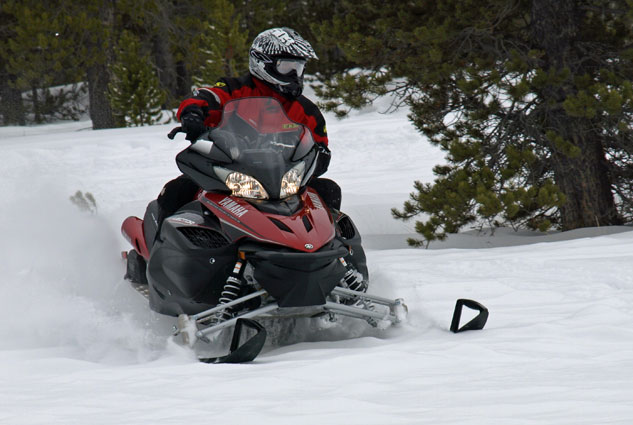 Chassis-wise the sleds vary in the manufacturer’s dedication to trail performance. The Ski-Doo MXZ TNT 1200 is built around the REV-XR platform, a widened version of the pioneering ride-forward REV design. This allows more room for the width of the three-cylinder Rotax and its inherent plumbing. You’ll find that most of the 4-TEC 1200 engined Ski-Doo’s are based on the “XR” chassis.

Yamaha evolved its chassis dramatically from the first RX-1 four-strokes that hit the snows back in Model Year 2003. Enhancements in Yamaha’s diecast technologies and a desire to bring the rider forward and lower engine placement allowed its sleds to have lighter, more efficient, four-stroke-specific engine cubicles. The actual chassis and suspensions share upgrades from the four-cylinder Apex series. This ride-forward platform provides the Vector with a very good sport cruiser persona.

Arctic Cat provides its four-stroke sport cruiser with the same performance and handling attributes found on its latest Procross models. Maybe this is why we feel that the Suzuki seems lazy. The chassis offers more than the engine can put into it. Keep in mind the base platform used in the ZR 5000 LXR is virtually identical to the one that holds the 177-horsepower turbocharged ZR 9000, so you know there’s untapped trail capabilities left behind with the 125-hp ZR 5000. 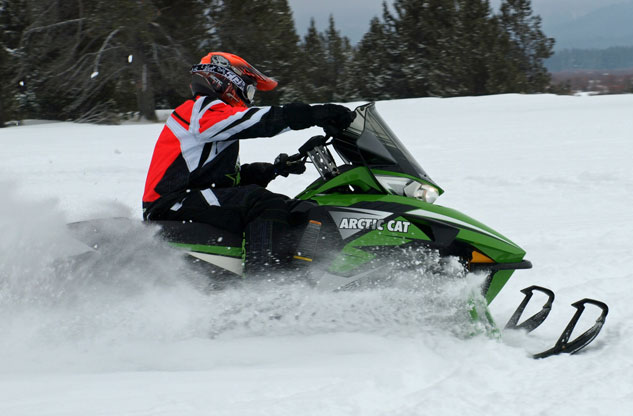 The Arctic Cat ZR 5000 LXR’s chassis and suspensions can handle way more power than the 1056cc Suzuki twin can deliver.

When it comes to rating these sport cruisers, we have to rate the Arctic Cat ZR 5000 LXR as the most fun to put into a turn. Its snocross-developed Arctic Race Suspension bites hard. Yet, the sled actually disappoints because we know how much more the set up could give if the Suzuki engine could deliver.

On the other hand, we feel that the Ski-Doo MXZ TNT 4-TEC 1200 and the Yamaha Vector are very similar in on-trail “feel” and performance. They are both incredibly smooth, but not as sporty as the Cat. Since the Ski-Doo 4-TEC 1200 came out after the Vector and was aimed directly at it, we’ll give the edge to Ski-Doo. The MXZ TNT utilizes the rider-forward ergonomics perfectly. The seating sits higher and is firmer. 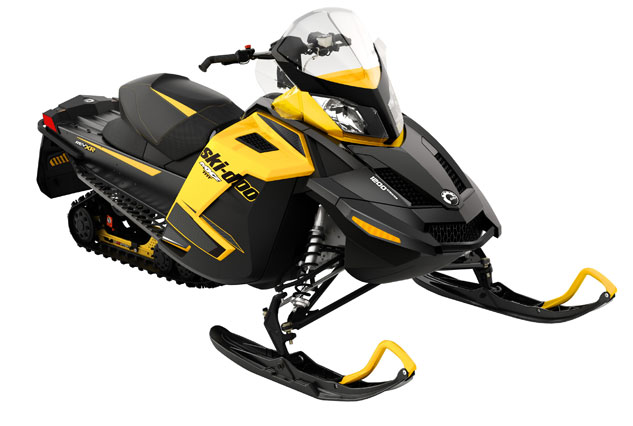 To accommodate the extra width of the three cylinder 4-Tec 1200 Rotax engine, Ski-Doo uses the wider REV-XR platform for this version of its MXZ TNT.

Yamaha’s Vector has been updated in the past three years, but we find its seating low and too soft for our tastes. It comes in third in our estimation. Of course, you have to give the Vector extra points for its use of electronic power steering (EPS), which seriously reduces steering input in tight, slow speed areas. Plus, the EPS gives you a little reprieve when traveling down a bumpy section as it mitigates feedback to your hands and shoulders.

Fro comfort, of the three, the Ski-Doo offers the best rear suspension. The rMotion slide rail is incredibly tune-able and let’s you get an excellent personalized ride. The Arctic Cat’s Slide-Action works well, too. It doesn’t offer the vast array of settings like the rMotion. The Yamaha’s dial-in “clicker” adjustment may be the easiest to tune, but it is limited to just how much fine tuning you can or may want to do. 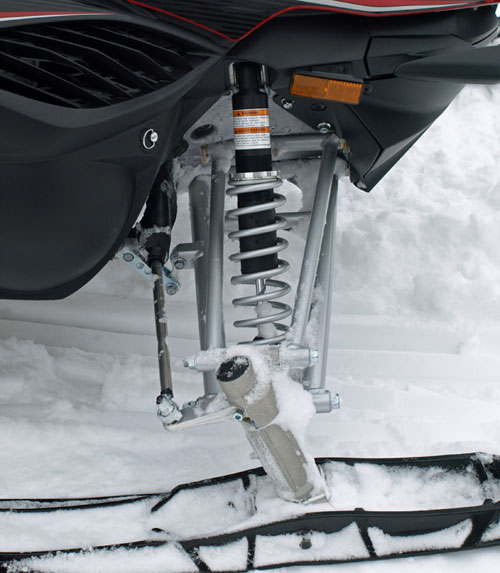 When it comes to value, these three sleds are not exactly bargains. Based on suggested US retail price, the Arctic Cat would look to provide the best value at US$10,799. The Ski-Doo retails for US$11,099. The Yamaha Vector tops them all at US$11,999!

If you want a smooth riding, quiet performance sled that can last for thousands of miles and years of trail cruising, we’d suggest a serious look at any of these models. We’d rate them as:

• Sportiest – Arctic Cat ZR 5000 LXR due to its excellent Procross chassis and ARS suspension
• Features and value – Ski-Doo MXZ TNT 4-TEC 1200 due to features for the money, like its standard rMotion suspension and retail price
• Long term value – Yamaha Vector, which is impossible to beat based on build quality, warranty, four-stroke efficiency and reliability. 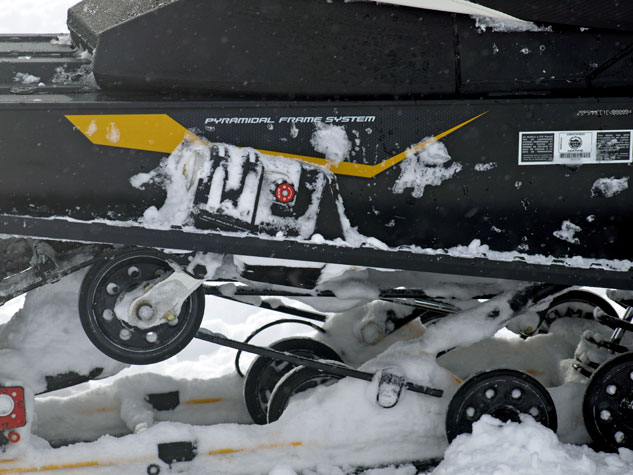 Equipped with the rMotion rear suspension, Ski-Doo’s MXZ TNT 4-Tec 1200 is the most tune-able and best riding sled in the 4-stroke sport cruiser category.

Truthfully, we would be torn if we had to make a decision that meant we’d have to keep the sled for five to 10 seasons. For immediate satisfaction we’d go with the Cat. The Yamaha would be our choice for the long term, but the Ski-Doo does everything well and has some great style. These three four-strokers work the trails well; give you value but retain their own character as each has its own strengths.