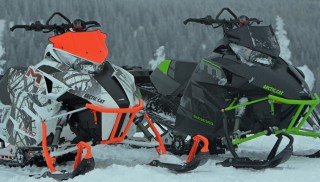 There’s much to say about Arctic Cat’s 2017 M8000 series – the M8000 Limited, M8000 Sno Pro and M8000 SE/ES. In fact, we’ve got so much to share that we’ll do so in two articles. First, we’ll provide a review of their similar but different riding missions. Indeed, though these three Cats are all based on the M8000 ProClimb chassis, they have different quirks that are designed for specific types of riders and riding. We will help you decipher what the M8000 triplets are about. We’ll get to their individual on-snow attributes in our second part where we’ll review our riding experiences.

We’ve already reported on Arctic Cat’s Mountain Cat, part of the M8000 treasure trove, but set apart from to be unique.

If you count on one hand, you’ll note four M8000s, the Mountain Cat, Limited, Sno Pro and SE/ES. The high end Limited from 2016 (which we rode all season-long) is second to the Mountain Cat; the 2016 Limited was highly-praised by our team of guest-test riders in our model year 2016 mountain snowmobile shootout.

Honestly, though, we have some trouble following the “why” of the two ‘tweeners – Limited and Sno Pro – stuck between the Mountain Cat and SE/ES. Nor do we see the need for a Limited and Sno Pro. There has to be some reasoning, but we do not sit on Cat’s dealer focus groups and from a journalist’s view, we have no answers to give you readers. However, Cat does and we’ll leave it at that. 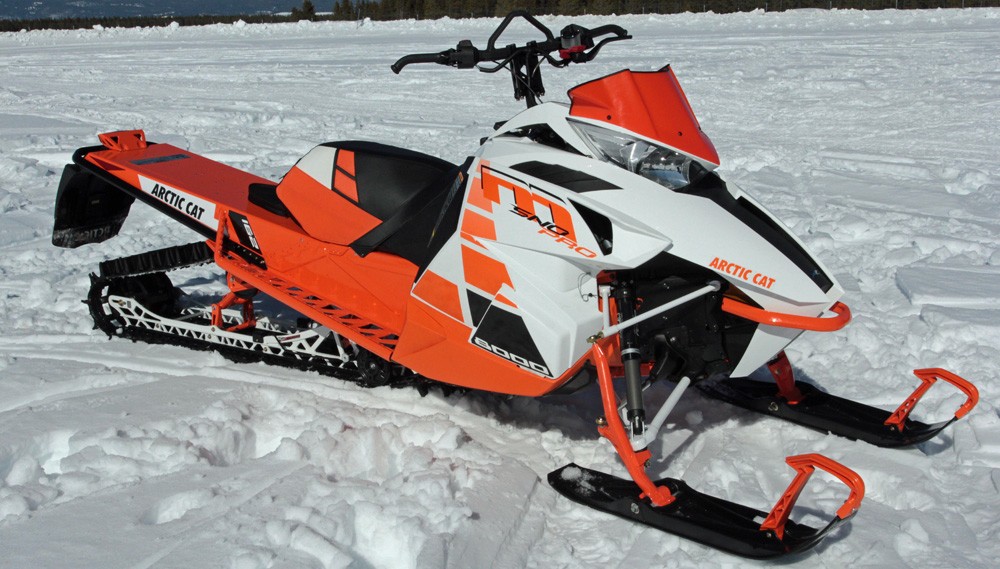 The M8000 Sno Pro is fully equipped with Fox Float shocks, and the tipped in and swept back spindles, which were introduced in 2016.

Here’s Cat’s “official” reasoning. Given these three variants are in the M8000 family, each are powered by the Arctic Cat-designed and Suzuki-built 160 horsepower-class two stroke twin cylinder motor with batteryless electronic fuel injection. Actual displacement is 794cc with a bore and stroke of 85mm x 70mm respectively.

Additionally, the three triplets have:

How do they differ? We’ll start at the top with the Limited and work our way across to the Sno Pro and then to the SE/ES.

The 2017 M8000 Limited is both a Spring-buy and in-season M8000, where for model year 2016, it was Spring-buy only. The 2017 Limited comes in black with smartly placed green and gray accents; this color and graphics combination is our favorite. It also comes in a flat white with gray-camouflaged Aspen trees and orange accents. This is a love it or leave it scheme. This author is not fond of it, but wow, my Dodge Power Wagon hunting buddies are bonkers about it. 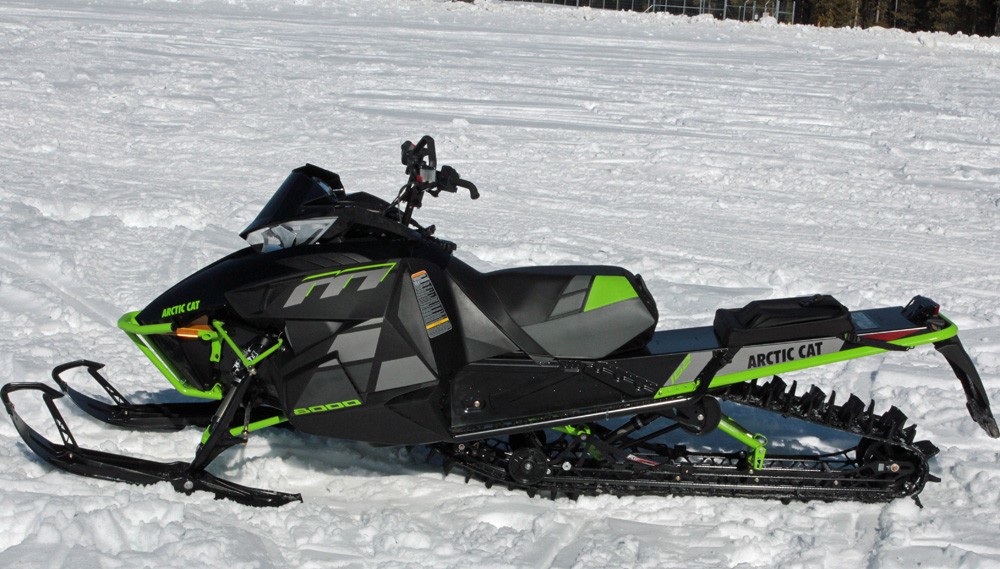 The Limited in its mostly blackout color, is the Limited we favor. The Limited remains a serious mountain snowmobile, though it has given up its crown to the Mountain Cat. 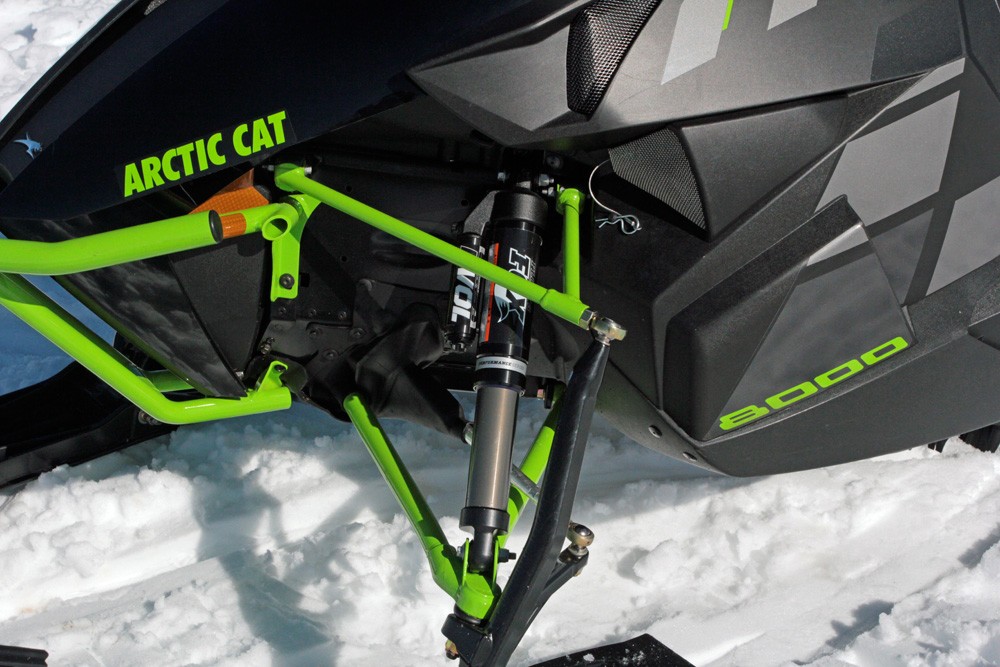 With Fox Float EVOL shocks and ProClimb bumper, the Limited can take the hits, the drops, the tree smacks, and can float in deep powder.

Think Limited minus the ProClimb front bumper, goggle holder and rear tunnel bag, and you have the Sno Pro. Basically, the Sno Pro did not spend as much time in the clothing store as the Limited.

By way of fun factor, there is one model in the Sno Pro line that is sassy, and very much like an XF High Country 8000 Sno Pro, the M8000 Sno Pro 141. We’ll discuss this more in Part II riding evaluations. 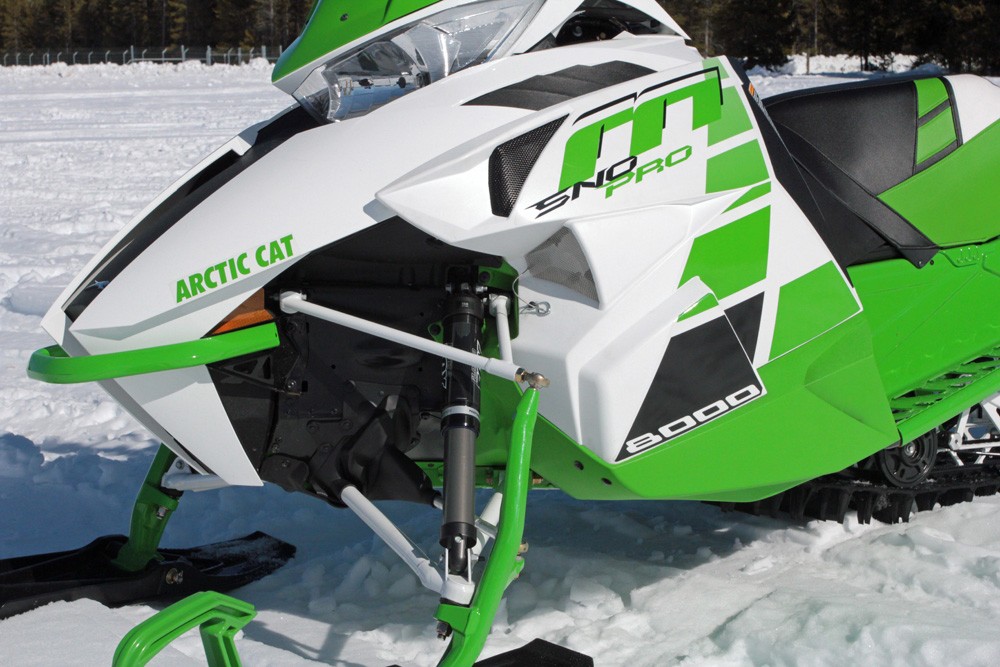 The Sno Pro lacks the ProClimb bumper and storage bags that the Limited has, but in this bold white and orange scheme.

Years ago, the Sno Pro was Arctic Cat’s top name for its mountain muscle snowmobile. Given that, the Sno Pro remains loaded for mountain hunting. The Sno Pro has three track lengths, 141, 153 and 162. All three lengths can be ES equipped. Colors are white and green or white and orange. These are fast looking powder players.

Track is the 2.6-inch PowerClaw. Again, track swap-out can occur, if the track is unused; dealer costs apply.

The standard Sno Pro bumper is mated to the nose and the Sno Pro comes with minimal storage, rear seat only.

Shocks at all points are Arctic Cat’s own coil-over IFP shock, which, historically, has been a shock that gives a fairly plush ride. 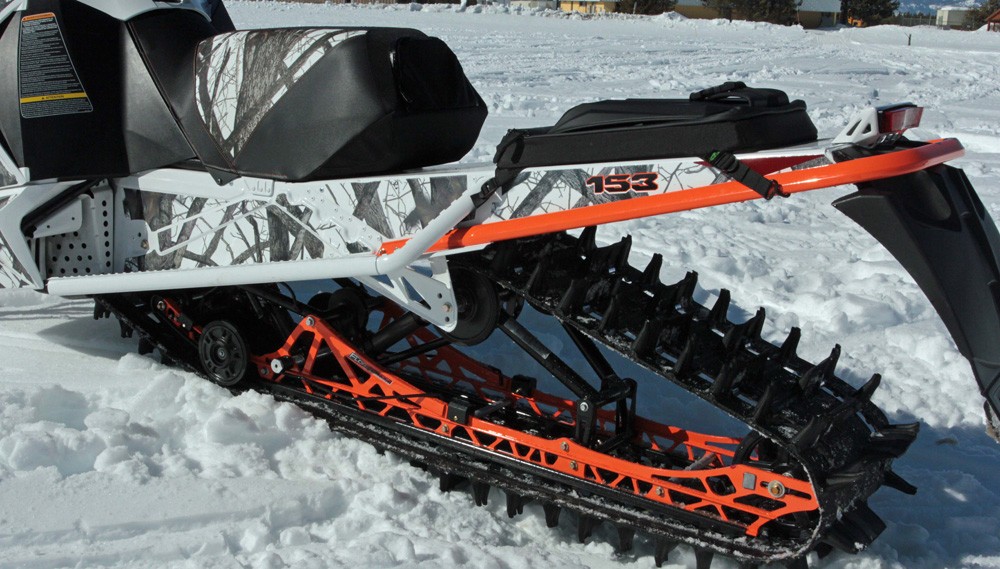 PowerClaw tracks are all standard on the M8000s. Here, the Limited shows off its 2.6-inch PowerClaw, which is a superb all-season track.

Like the Sno Pro, it comes with the standard M8000 bumper and rear seat storage. One color scheme applies, black with green with white and gray accents. Besides the SE/ES not using Fox shocks, the SE/ES has one component that is unique to this model: vertical steering post with adjustable-height telescopic mountain handlebar (at Cat’s 2017 introductions, the marketing department folk clearly reported the SE/ES had a fixed post, but on the SE/ES webpage, it declares the telescopic post is standard), and standard non-premium, digital/analog speedo and tachometer. Track lug height for the SE/ES is 2.25 and it too, like all the other M8000s, is a PowerClaw. 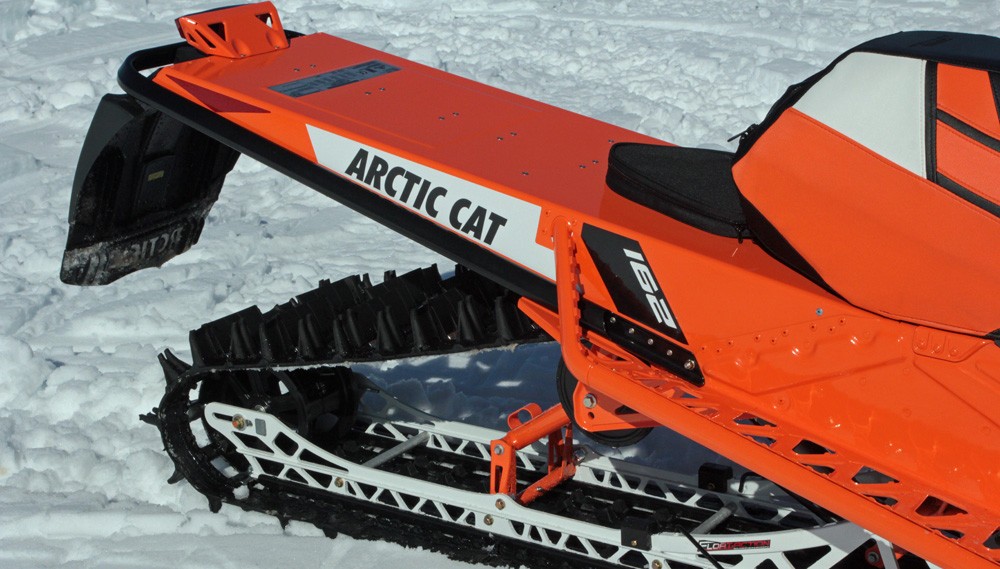 With painted tunnels, all M8000s keep at bay, snow- and ice-buildup. All M8000s come with ice-scratchers and lightweight mountain seat.

There you have it. The three Arctic Cat M8000s have purpose, but as we wrote at the beginning, we are a bit confused with the in-between sleds, which can be either the Limited or Sno Pro. Regardless, these M8000s are strong players with the limiting factor being track lug height.

For our real on-snow opinions as to how these units handle mountain powder, check out Part II to pull down our mountain attitude on this triplet set.