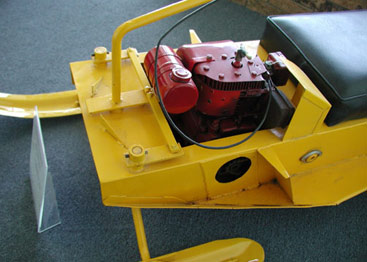 A sled like this belongs in the World Snowmobile HQ

Some things deserve a world stage.

Things of note you’ll see at the new World Snowmobile Headquarters in Eagle River, Wis. include a display of historic and unique snowmobiles. Among the display of ‘traditional’ Polaris Sno-Travelers and historic World Championship twin-track racing sleds is a quite rare ‘kit’ snowmobile on loan by Jerry Wanty of Jackson, Wis. to the HQ’s museum area.

Wanty’s redone 1968 Sno-Skat is unusual from a variety of reasons. It is a unique collectible due to its relative obscurity. The fact that it was sold as a kit adds to the uniqueness of the sled. And it also showcases some rather clever design aspects—one of which is being hyped in today’s sleds as breakthrough engineering. Perhaps the folks at Sno-Skat were 40 years ahead of their time with the 1968 Sno-Skat. 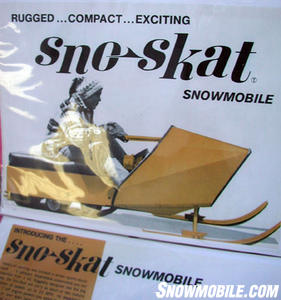 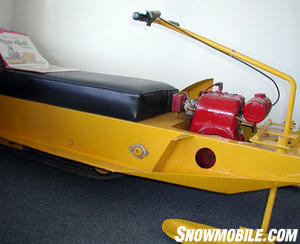 The sled was offered as a do-it-yourself kit in 1968 and boasted a carrying capacity for one adult or “two mature children.” The unit’s 4stroke, single cylinder, air-cooled engine was set low in a recessed portion of the tunnel, just back of the steering post and ahead of the seat.

Promotional material stated “The Sno-Skat offers an exceptionally low center of gravity because the engine is recessed or submerged into the frame. This design feature reduces overall vibration to a minimum while increasing the stability of the machine in operation.”

With the engine tucked away, engineers also enclosed the myriad of moving parts out of harm’s way, too.

“In addition to the low center of gravity created by the recessed engine,” touted the brochure, “the Sno-Skat presents no exposed drive chains or track. If you do happen to tip the machine, you will fall safely clear of all moving parts.”

The engine-mounted clutch was a typical centrifugal unit that you would use for a home-built lawn mower-powered, off-road go-kart. It was simple, efficient for the power output and relatively inexpensive. Braking appears to have been a matter of letting off the throttle and letting friction take over.

Even with a basic ‘lawn mower’ type 5 or 7 horsepower motor, the Sno-Skat was said to achieve speeds upwards of 20 miles per hour, even with an adult who might actually match the diminutive sled’s 180 pounds of dry weight.

Since the engine in the display model was likely an ‘off-the-shelf’ Briggs & Stratton or Tecumseh 4stroker, the fuel tank would have come with the motor and probably had about a quart of fuel capacity. But they would have provided ample fun time for those mature children.

The rear suspension used basic big-wheeled bogies while ski suspension relied on the flex in the shaped steel steering rods attached to the metal skis.

Passengers sat on a luxuriant (by 1968 standards) three inches of foam seat support. 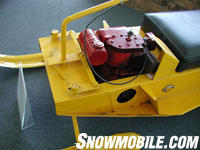 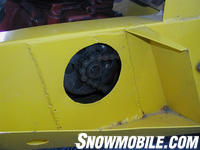 Designed to be rugged, compact and exciting, Sno-Skat’s lightweight construction made it “…much easier to lift out and keep going if you happen to dig into a snow bank, etc.”

The Sno-Skat is one of the more interesting sleds on display at the World Snowmobile Headquarters. But, also you’ll find a Polaris ‘Li’l Andy’ and a nice sampling of other significant snowmobiles from the past.