From dirt to snow 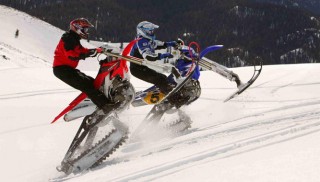 As much as they hate to do it, dirt bike owners usually have to put away their rides when the snow begins to fall. A Nampa, Idaho company has decided that is not acceptable.

After years of development, 2Moto Inc. has come up with a way to turn dirt rides into a snow ‘bikes’.

For US$4,249, riders can purchase a Radix kit that helps convert dirt bikes for snow riding by replacing the two wheels with a ski on the front and a rubberized snowmobile-like track on the back. The result, according to the company, is a lightweight, agile machine that can ‘climb like a scalded monkey up a tree.’ 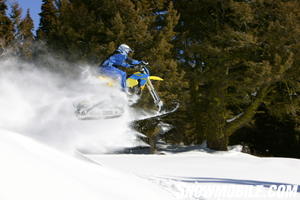 “The whole focus was to design a dirt bike that functions better on snow that it does on dirt,” 2Moto vice-president of sales and marketing Brett Blaser told Snowmobile.com.

Though the idea made sense to 2Moto, it took quite a lot of time to go from concept to consumer.

“We’ve been in development for 10 years, and the reason it has taken so long is we’ve gone through several generations of prototypes,” says Blaser. “Snow is such a variable substance–hard pack, ice, dry powder, heavy powder–we wanted something that was perfect, that handled and really exceeded our expectations. And that’s what we got.”

With the creation of a snow-bound vehicle, comparisons to snowmobiles were quick to follow.

“We didn’t design the snow bikes to compete or really even compare with snowmobiles, it’s just the logical thing that everybody compares us to,” says Blaser.

Blaser says the snow bikes perform just as well as a snowmobile and can take riders places that traditional sleds can’t.

“It’s lighter, it’s quicker and you can go more places,” says Blaser. “You can get into anywhere. Wherever snow sticks you can go.”

Sacrificing speed is apparently not a concern with the snow bike.

“I haven’t GPS’d the top speed, but I did get in a high-speed drag race with three brand-new (Ski-Doo) REV 800s last year. And I was five or six miles an hour faster than the 800s on the flats, so we’re guessing 90-plus miles an hour.”

Blaser says the snow bike is doing a good job of selling itself, and his customers are spreading the word. 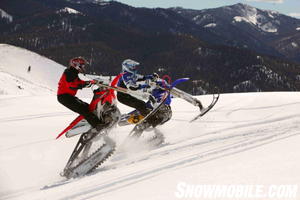 “It’s the most addicting powersport thing I’ve ever witnessed,” says Blaser. “Anybody that touches it or hears about it, they want to buy one. Guys that ride them or have bought them, they are diehard, instant converts and they follow us everywhere.”

The company claims the Radix kit is fairly simple to install.

“The kit comes basically ready to install. We bolt on in two places, the main swingarm bolt and the upper shock bolt,” says Blaser. “Then you hook your brake line and your chain line. Basically the hardest thing is pulling the air box out of the way.”

Blaser says the kit takes about two hours to put together for any first-timer who can handle a wrench.

When asked if it was as complicated as assembling a new dresser from IKEA, Blaser balked.

“No, not that tough. I don’t even attempt those.”

With the Radix kit installed, the snow bike typically weights about 40 pounds more than a standard dirt bike. 2Moto also produces a complete snow bike, the Rogue, which has a dry weight of about 280 pounds and has everything you need to convert it into a dirt bike for the summer.

The Rogue comes equipped with a 650cc, 4-stroke, four-valve OHC motor and chassis by Husaberg. It comes with the air box inside the frame so the buyer doesn’t have to remove or reinstall it. It also has a bit more travel in the rear end.

2Moto released the Radix in March and sold all units it produced. The company aims to make between 400 and 500 kits this season, hopes to expand production into the thousands next year.