Oh, about five to six years ago, Polaris brought 100 sleds to the annual manufacturers’ springtime snowmobile test ride event attended by all key sled media. We remember that event not so much for the quality of the Polaris models assembled, but for the quantity. The Polaris Indy line had peaked into almost as many iterations of itself as there once were snowmobile companies. Existing wisdom suggests there were about 120 individual sled makers over the course of snowmobiling history. At this event, Polaris brought nearly that many versions of its Indy. Any wonder Polaris dealers had difficulty ordering product back then?

Fast forward to this past March in Grand Lake, Colo. and Polaris arrived with merely a handful of separately distinguishable models. Since the emphasis was on the new 600 Rush and its Pro-Ride suspension, there were a handsome number of them available. All the other models seemed to fall further down the Polaris food chain, but we found ourselves enchanted with the newly repurposed 600 LX and Turbo LX models.

We refer to them as repurposed because Polaris’ marketing philosophy has taken a complete 180-degree shift from that overwhelming display of product introduction not so many years before. Instead of adding a new widget to an existing sled and calling it a completely new model, Polaris has actually taken features from several models and blended them into a singular model. When we went looking for a stretch-tracked turbo to ride at this year’s test session, we couldn’t find the Turbo Switchback. It’s gone. Sort of, that is. In its place is a better model that combines the strengths of the turbo, the stretch track attributes of the Switchback and the pleasantness of a true all-day personal sports sled. Say good-bye to the 2009 Turbo Switchback and hello to the 2010 Turbo LX. 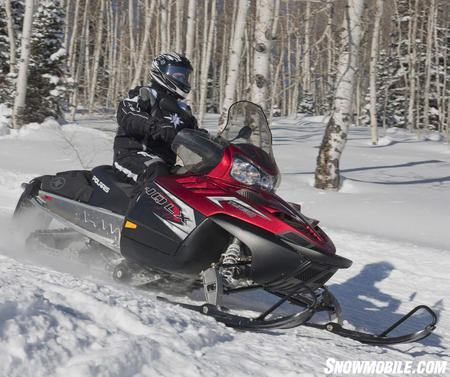 The stretch track helps bridges bumps for a smooth ride.

Perhaps our expectations were too low, but we found ourselves with a great appreciation for both LX models. The 600 LX is very pleasant and we certainly like the fact that the 599cc two-stroke twin is nearly 80 pounds lighter than the turbocharged 4-stroke version. But if we were strictly riding groomed trails and looking to make miles, the Turbo LX would be the better choice. 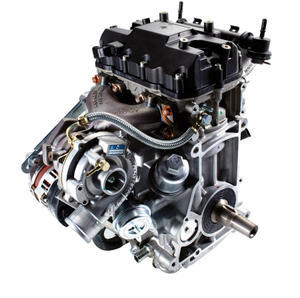 This 750cc turbo 4-stroke twin has amazing power for its size. 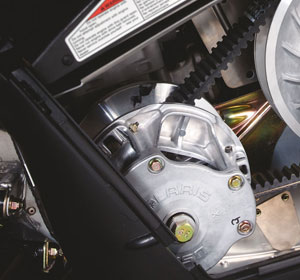 When Polaris introduced its 4-stroke turbo in 2006, the compact 750cc twin was set into the early IQ chassis used by the 900cc Fusion and RMK models. Since then, the turbo engine has undergone minor revisions for durability, but the basic reasons for its introduction remain. The base motor, sans plumbing for the turbo, fits compactly in the engine bay for a low center of gravity and lowered mass for overall sled balance. Since the motor comes with a counterbalancer, the engine is incredibly smooth. Equipped with dry sump lubrication, operation in winter’s extreme temperatures has not been a problem.

Using a Bosch multi-port fuel injection system, the turbocharged 4-stroke delivers quick throttle response and surprisingly strong acceleration. It provides a top speed comparable to many sport performance 2-stroke sport sleds. In other words, the small turbine twin spools power quickly and efficiently when you want to run across a long lake or down a wide-open trail. We have experienced this twin in a variety of Polaris models, from the turbo Dragon sportster to the turbo Touring two-up. It is impressive for its solid performance which includes a quick boost of up to 15-pounds when you lay into the throttle. With more than 135-horsepower and 95 ft/lbs of torque, this motor has plenty of spunk for getting the 599-pounds of Turbo LX off-trail or ahead of the pack for a bout of breaking snow. The downside to this set-up is the added weight of the turbocharger, extra weight for cooling from the radiator, and the added weight from luxury touches on the 2010 not used on the 2009 Turbo Switchback.

One of the turbo’s attributes we’ve learned to overlook is the seemingly incessant popping when excess turbo pressure is relieved via the pop-off valve. It’s unsettling at first, but then you accept that this is part of the turbo character. As a luxury sport sled powerplant, the 4-stroke turbo blends in nicely. It is smooth, quiet, and quick to spool for quick acceleration when you need it and fuel efficient for making miles with few stops.

You should also appreciate that this luxury-oriented stretch tracked 4-stroke requires only an annual oil change — meaning a savings on oil and no 2-stroke odor clinging to your Polaris riding gear.

When you look at the technical specifications, you’ll note that the Turbo LX remains essentially the same as last year’s Turbo Switchback. Both came with the Polaris P-85 drive clutch with Team-built secondary. There are differences between the packages as the LX moves from an off-trail orientation to a sports on-trail mode. The IQ suspension package front and rear remain essentially the same, but expect a bit of difference in shock valving aimed at making the ride plusher on the 2010 Turbo LX. Still, up front you’ll find up to 10-inches of travel controlled by Ryde FX gas shocks, complete with internal floating piston. The 13.9 inches of rear travel features shock control from a Fox PS5 gas shock on the IQ 136 Coupled suspension’s rear arm and a Ryde FX unit on the front shock arm. That carries over from the 2009 Switchback to the 2010 LX version. There is a difference in track, though. Because the LX will be more trail-oriented, Polaris engineering equipped it with a less aggressive Hack Saw track. Unlike last year’s Turbo Switchback, the 2010 Turbo LX presents a shorter 1.0-inch lug profile to the snow instead of the Switchback’s 1.25-inch lug.

What the stretched 136-inch track and coupled suspension continues to provide in either case is the ability to bridge stutter bumps and maintain a cushier overall ride experience. In reality, Polaris figured out that many Turbo Switchback riders were looking for the advantages of the longer, smoother riding track length more for trail riding than for actual off-trail excursions. After all, a 600-pound snowmobile with a forward weight bias isn’t the most nimble vehicle to take boondocking. But it works pretty darn well on the trail. 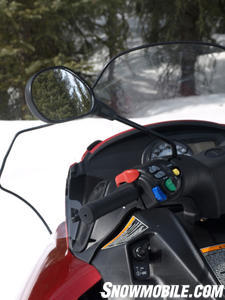 Adding to that luxury sport feel is the retention of the seven-position Polaris Rider Select handlebar set up. If you want to cruise, you set the bar at 3 to 5. When you feel a bit randy and want to pound the ditches, move the bar up to 6 or 7. You’ll find that despite the luxury overtones, the 2010 Turbo LX remains a sporty Polaris. Of course, now you can enjoy the benefits of the rearview mirrors, cut and sewn Freestyle sport seat, standard tunnel bag to carry gear, electric start, electronic reverse, and the smoothness of the Polaris 4-stroke twin.

When we reviewed the 2009 Turbo Switchback last season, we had some reservations about it as a true off-trail boondocker. But in the guise of the 2010 Turbo LX, we think Polaris hit this niche perfectly. The Turbo LX is well suited to be a very endearing personal trail sled with the advantages a stretch track offers.

If you are the first person to hit the trails after a big snowfall, the Turbo LX will have ample power and traction to break trail and let you have fun doing it. When you hit the fresh groomed trail section, you can kick back into full cruiser mode, set the handlebars, ease on the throttle and make easy miles. The 2010 Turbo LX brings the best of off-trail, solo touring and sport riding into one smooth running snowmobile. We say, check it out.