Of the two "Value" 600 Indy versions, the SP is worth the extra dollars.

The Polaris Indy series combines the nostalgia of an iconic nameplate with solid value. For model year 2015, Polaris offers two versions of its 600 Indy — separated by about a thousand reasons either to (or not to) upgrade from the base model to the slightly better equipped “SP” model.

On our “wants” list, the 600 Indy SP ticks more boxes of need-to-have items. But, we do have to ask ourselves if those things we want are really worth the price. Fundamentally, as you might expect, both sleds are incredibly similar. The big differences only matter if you see yourself as an aggressive rider. 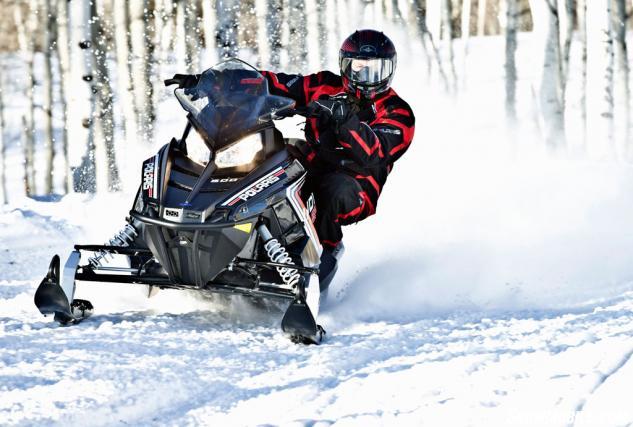 Polaris’ 600cc Cleanfire two-stroke twin powers both this 600 Indy SP and a lower-cost base model.

Under the hood sits the same Polaris engineered and built Liberty 599cc two-stroke twin. Pushing about 120-horsepower through a Polaris/TEAM drivetrain, the engine performance should be the same for both models. The main drive is the venerable Polaris P-85, which has been harnessing both Polaris-built and Fuji-supplied engine power for a very long time. The TEAM lightweight driven pulley is race-proven and extremely reliable.

Both 600 Indy models will give you consistent performance thanks to Polaris’ proprietary Cleanfire injection system. So, whether you pop for the “SP” or stay with the base model, you can expect strong on-trail performance with smooth drive-away from a stop sign and stout acceleration to midrange. Top speed will net you a serious fine on virtually any snowmobile trail. The Polaris “600” engine package is the equal of Ski-Doo’s 600 E-Tec models, so you don’t give away anything in performance for not paying the extra money for the “SP.”

The 600 Indy brings an iconic name back to snowmobiling, but make no mistake, the 2015 “value” Indy is a substantial upgrade over the old IFS-suspension versions.

If you like to play on the trails and enjoy serious handling in corners and tight switchbacks, you’ll want to think about going with the SP. This version gives you excellent trail feedback thanks to its upgrades versus the base 600 Indy. The front suspension features coil-over springs on Fox IFP (internal floating piston) shocks. The base model is fitted with RydeFX MPV shocks, which use a patented “low fade orifice carrier” to provide a seamless transition from low speed riding, to firm, controlled performance-oriented handling. The RydeFX MPV shock is a good all-around shock that frequently appears on “value” models, like the Indy’s predecessor, the Polaris Shift. The Fox IFP is designed to be compliant as well, but perform better with less shock fade when riding rough trails. This difference in shocks is one way the two Indy’s differ. You’ll find Fox shocks on the Indy SP rear suspension as well.

Spinning around the parallel rail Indy rear suspension is another differentiator, the track. While both Indy models come with a 15-inch wide by 121-inch overall length rubber track, there are not so subtle differences. The base 600 Indy comes with the Shockwave design track, which has a low lug height of 0.91-inches. The 600 Indy SP will give you a bit more grip from its Hacksaw tread and slightly taller 1.0-inch lugs.

The 600 Indy’s aluminum platform borrows features from the lightweight deep powder sleds, but adds its own Indy rear suspension with nearly 14-inches of travel.

The Hacksaw is adequate for the Indy SP, but we think a Ripsaw track with 1.25-inch rigid lugs and a more aggressive tread design would be more appropriate. Still, the Hacksaw track does provide recessed tips and cutting edges designed into its crescent-patterned lugs. The Shockwave track will perform very well on groomed trails and is a good value. But, if you want to push the sled’s limits in the corners and they are covered with loose snow, expect more slipping and sliding than with the Hacksaw. The 600 Indy’s aluminum platform borrows features from the lightweight deep powder sleds, but adds its own Indy rear suspension with nearly 14-inches of travel.
Aggressive riders should seriously consider the “SP” over the base model for other performance reasons as well. The SP comes with the newer one-piece handlebar that incorporates the curved bar end. Plus, the heating element extends the full length of the grips for more effective comfort. The SP also has the advantage of Polaris’ Pro-Steer ski, which is more positive in the turns and actually requires less steering effort. The basic plastic Indy ski is standard with the base 600 Indy.

Both 600 Indy models will give you a firm yet compliant ride thanks to the widened Indy Pro-Ride seat. Although wider at the rear, the seat does taper inward, allowing you to apply ample “body English” into a tight turn.

If we were to choose between these two Indys, we’d go for the “SP.” We feel that feature-for-feature, the SP does offer value for the extra dollars you’ll spend. The Fox IFP shock package is a plus. The Hacksaw versus Shockwave track suits us better. The Pro-Ride skis and one-piece handlebar are both “must haves” for us. Of course, for straight-ahead performance, the sleds should be virtually identical. 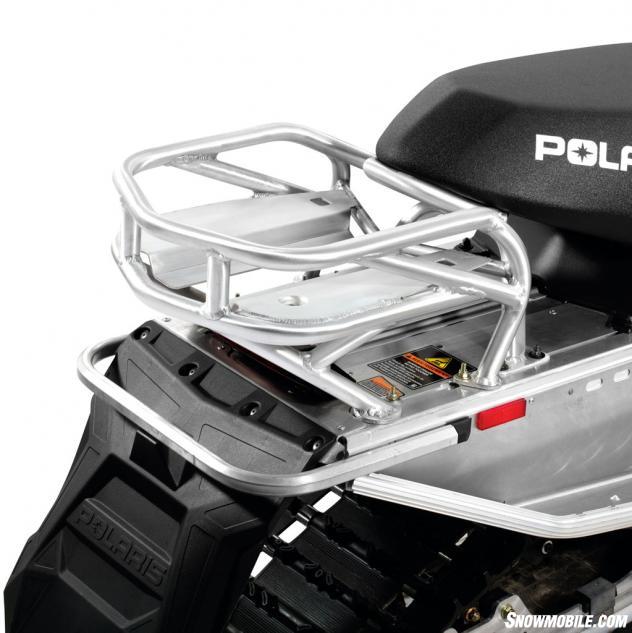 Polaris offers a series of add-ons for its Indy series, including a custom-fitted aluminum rear rack.

For the extra US$1000, the 600 Indy SP will provide more overall fun. But, if you want a bargain in the 600cc category, the base 600 Indy fills the bill. Of course, if you want a better bargain and saving money is the issue with overall performance secondary, check out the fan-cooled 550 Indy, which carries a suggested retail of US$6,499. Except for the drive system, the 550 Indy comes with most of the same basic features as the base 600 Indy. Still, we’d go for the 600 Indy SP, better overall features and a great value in a sporty trail sled.