It was happenstance at the new model ride and photo shoot (Feb. 2009) in Grand Lake, Colo., the mountain team received a day of testing Ski-Doo’s model-year 2010 Renegade Backcountry X. We didn’t know what was up Ski-Doo’s sleeve when we booked that crossover sled for a day of testing, but the end result was an immediate addiction.

As time moved on, 365 days worth to be exact, the Snowmobile.com mountain team became the testers/evaluators for the crossover segment, including the latest generation and model-year 2011 Renegade Backcountry X.

The 2011 Renegade is built around Ski-Doo’s crossover REV-XP platform that is specifically designed to cover two riding styles, fast trail and open meadows with gentle rollers and knee-deep powder. The Backcountry X we evaluated was powered by Ski-Doo’s new E-TEC electronic direct fuel injected 800 Twin. It has an actual displacement of 799.5 cc, which comes from a bore and stroke of 82mm by 75.7mm. The BRP Ski-Doo/Rotax 800 E-TEC’s technology comes from the 2010 600 E-TEC motor by way of BRP’s Evinrude outboard motor technology but designed specifically for the larger bore Twin cylinder snowmobile two-stroke engine

The 2010 Renegade Backcountry X we throttled in Grand Lake used the PowerT.E.K 800 R motor, which is now replaced by the newer more fuel- and oil-efficient 800 E-TEC 800R motor, which also manages to throw down some fat horsepower, a claimed 155 — but reported by various dyno-testing to be 160-plus! 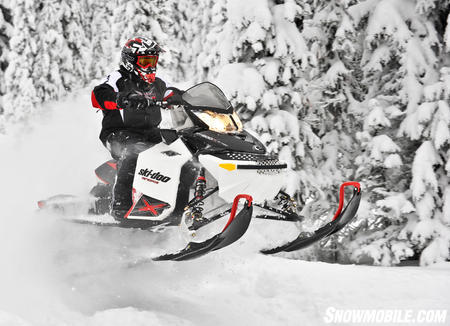 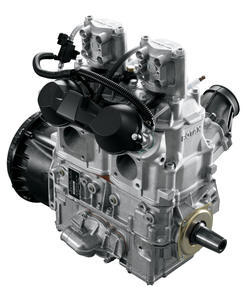 Powerfully smooth and quiet running might seem to be enough, but Rotax’ latest E-TEC 800cc burns fuel as efficiently as a 4-stroke while delivering way more than its advertised 155-horsepower.

The new techno-mill uses voice-coil injectors, which control fuel delivery via wire-fed (coil) electric current that acts as an electromagnet to pressurize and release fuel at precise calculated rates. The exhaust valves are 3-D mapped through the computerized control module that allows the Twin mill to efficiently perform (build and hold horsepower) at low-, mid, and high-RPM levels. Because the engine’s control module generates excess heat as it pours through 8,000 calculations or more per second to control engine throttle inputs, Ski-Doo’s engineers built in a liquid-cooled loop to keep the control module cool.

The drive clutch is BRP’s own TRA VII and equally too, the driven is BRP’s QRS. These both have a wide range of adjustments, which you’ll want when taking the Backcountry away from flatland country to the Rockies, which many owners do.

To get maximum float in deep powder, the Backcountry X is built on a 137-inch platform that spins a 16-inch wide PowderMax track. That’s just like the Summit 800, but with shorter lugs, 1.75-inches. In comparison, Polaris’ Switchback Assault is 144-inches with a 15-inch wide track, and Cat’s Crossfire 8 is a 141 that is also 15-inches wide. Yet, when calculating the wider track — 16-inches versus 15-inches — to length, the Backcountry X matches the other crosses in footprint to the snow. The rear skid frame is Ski-Doo’s reliable and comfortable SC-5. To dampen out the chitchat through the chatter bumps, a KYB Pro 36 aluminum piggyback rear shock with dual-speed compression adjusters is standard. 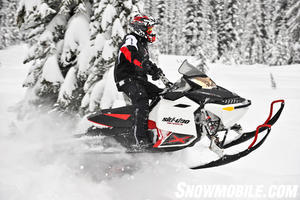 At the nose, the Backcountry X relies on a lightweight A-arm front suspension with HPG Plus R aluminum front shocks and Pilot 6.9 skis to keep the it aligned with its driver and his mission. Ski stance is adjustable.

Like all BRP products, the Backcountry X comes standard with electronic reverse — a much-appreciated amenity that adds virtually no weight to the already light XP chassis. As this is a premium sled, it is equipped with a multi-function digital gauge that reports engine speed, MPH/KPH, all engine vitals and altitude.

For the rider, a REV-XP X-style seat and hand/wind deflectors give protection, comfort, back support and “Wow.” We think this sled is sweet looking with color and sculpturing that are Baby Boomer, Gen-X and Gen-Y pleasing.

On the trails — groomed, clunky, chattery, or icy — the Renegade Backcountry X was nailed down like a bullet train. Its SC-5 rear skid with KYB Pro 36 aluminum piggyback rear shocks and HPG Plus R aluminum front shocks knocked down the spooks when monster hunting the moguls. The Backcountry X allows for smooth and free leaning into a narrow right or left turn. Its runningboards give the rider space to move his foot forward and back with little hindrance. The hand/wind deflectors are nice and wanted for those cold days when miles are long between destinations. As for me, when riding in a standup position and reefing on the bars through the ravines and junkets, the deflectors limit my hand movements. But, other hardcore backcountry purists do not bang their hand on the deflectors like me, so this is a personal point. 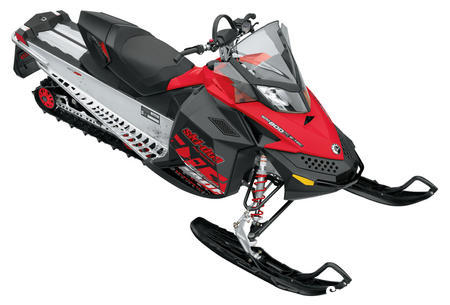 The new power package and revised handling make the “in-season” Backcountry a very good buy for the serious boondocker.

The 800 E-TEC motor was clean, free of smoky two-stroke odors, and fiercely competitive down the trail when launched hard. Through the powerband, the E-TEC big mill kept its revs when full throttle was applied in deep snow. Let’s be fair and admit that this is not a Summit X or Summit Freeride, but we rode it like it was and learned it has good deep-powder capabilities. It performs well for its intended and designed use. But what ultimately wooed us were its superb high-speed trail manners. It is a confident and a much in-control snowmobile.

Now, two final thoughts. First, we implore BRP to give this sled some storage, such as adding a rear seat storage bag as standard equipment. We’re long trekkers — the true backcountry explorer — and like to carry stuff. And second, offer an optional riser block for the handlebars. Tall built riders may desire handlebars that are closer to their core (when standing) so when they cut divots in deep powder meadows, leverage and comfort are optimized. The handlebar riser for Renegade is 115mm versus the Summit’s 160mm; we’d like something in between the two.

My experience with the 2011 Renegade Backcountry X was one that took me by surprise. Maybe I had preconceived Ideas about the sled, but by the end of our session on the Renegade Backcountry X, I was left with a very favorable impression. And what impressed me the most is how it handled on the trail. The harder I pushed it into the corners the more confident I became — it handled everything the trail could dish out. 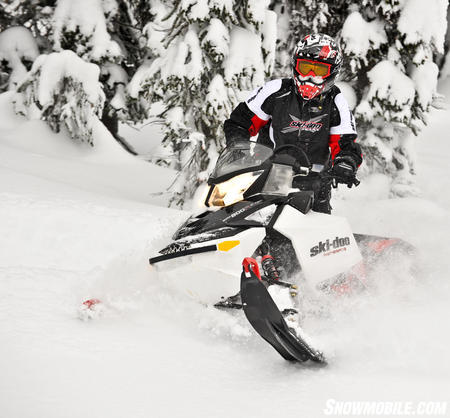 From the mountain and off-trail perspective, this sled ranks as a pretty serious mountain machine with all the necessary mountain amenities. However, its wide ski stance, which contributes to its great trail handling, affects its side hilling as it is not as crisp to pull off as a Summit, especially on hard snow, but this would be the case for any wide front end machine. From my seat time, this is a great crossover segment machine, which leaves very little in the area of “compromise,” it does it all, very well.

The Renegade Backcountry X is a pretty good all around sled. Being it has a longer track than the MXZ, it is smoother down a bumpy trail, and also, its front end stays planted to the trail as it takes on tight corners. It has plenty of power with its new E-Tec engine, and with that, the E-Tec delivers a nice-and-easy throttle pull, noticeably easier over the Power TEK 800 R from last season.

In the steep country, it is harder to sidehill than the Summit, and that is expected as Ski-Doo’s engineers designed this more for on- and off-trail riding, and non-extreme boondocking — for the trail rider who might want to try out some boondocking. Yet the full-time mountain rider will enjoy this snowmobile’s mountain-like characteristics for trail riding. As long as you keep its compromises in mind you will be perfectly happy.