Ski-Doo’s “basic” two-up touring package comes with amazing features for a sled designed to be a “value” model. When you consider what you get for a suggested retail price of less than US$9000, you have to be pleased.

Let’s face it, two-up touring snowmobiles won’t lead the sales charts any time soon. In many cases the two-up “value” touring models bypass dealer showrooms on their way to rental fleet operators. Those that do make the dealerships probably sit off to the side of the show floor, away from the flashy sport and stretch track models. Maybe the fully loaded Grand Touring SE with its triple cylinder four-stroke and snappy styling gets a prominent place on the show floor, but you might have to ask the dealer where you can see the value-priced two-up Grand Touring Sport. Granted the GT Sport presents a more conservative appearance in its more raw black coloration, but it offers true value derived from its REV-XP chassis and quite sophisticated Rotax four-stroke twin. Test riding the GT Sport ACE 600 in West Yellowstone presents a drawback as performance is mitigated by elevation that starts about 6700-feet and goes up as you ride the popular mountainside trails. Struggling with thinner air is a reality for the basic 60 horsepower engine. In the flatland areas of the Midwest, performance will be quite adequate. While not speedy, the ACE 600 twin will be consistent for all day touring. The second-year four-stroke twin works well with Ski-Doo’s ATV-based primary eDrive clutch. The four-stroke power curve and the eDrive driven provide smooth drive-off performance beginning at 2200 RPM. Maximum revs run to 7250. These numbers are about a thousand revs low when compared to the more powerful carbureted Rotax 600 two-stroke, which is available as an option in the GT Sport series. 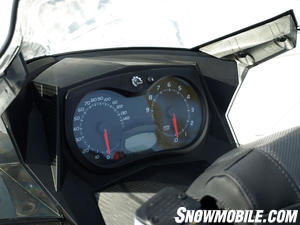 The easy to read instruments track your speed and mileage on a long ride.

At flatland elevations the Grand Touring Sport with the ACE 600 will offer good on-trail speed and acceleration, but should deliver extremely impressive fuel economy. Ski-Doo claims its fuel-injected Advanced Combustion Efficiency 600cc four-stroke can get upwards of 29 miles per gallon. Okay, we’ll give them the claim, but in most cases we doubt you’ll see that with the Grand Touring Sport ACE 600. High teens or low 20s would be our guess based on how most snowmobilers ride. Add in the weight of two riders, the friction of the 137-inch track and the incredible variables of snow and trail conditions will detract from the “perfect” mileage estimate. All in all, mileage in the low to mid 20s would be exceptional for a day’s ride.

We believe the Grand Touring Sport with ACE 600 can satisfy a vast majority of snowmobilers. Well, the majority that don’t have to have triple digit speed on tap at the crack of the throttle. Our test rides of ACE 600–equipped sleds proved that this engine is extremely competent whether powering a sport version like the MXZ or a “stretch” track model like the Grand Touring. Indeed, the ACE 600 sleds can be a great deal of fun to ride as you have to rely on your driving skills more than your throttle thumb if you want to maintain a quick pace, especially through tight turns. 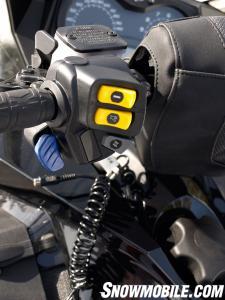 The driver’s handwarmer controls are easy to spot and easy to adjust as you ride along.

The Grand Touring Sport may be value-priced, but it offers features that used to be considered premium value. The sled comes with a very comfortable two-up seat with backrest and covered passenger handgrips. Rearview mirrors and such things as electric start and reverse satisfy the “luxury” specifications of a grand style touring model.

The Grand Touring Sport derives its sporty character from its REV-XP chassis. This is the foundation for Ski-Doo’s stretch track Renegade on/off trail sport model. The chassis is well balanced and proven durable for all terrain. The Sport’s SC-5M rear suspension has been carefully balanced for touring riders and features a Motion Control shock on the front suspension arm with a high pressure gas shock at the rear. This is a durable package that has proven popular with rental operators who have to keep their fleet sleds on the snow to generate profits.

Ski-Doo brings its SilenTrack technology to the budget-oriented Sport ACE 600. Measuring 15-inches wide by 137-inches in overall length, the GT Sport ACE 600 benefits from this freer rotating track design that also reduces track noise by up to three decibels. Ski-Doo uses Motion Control shocks on the A-arm suspension to control up to 9-inches of travel. 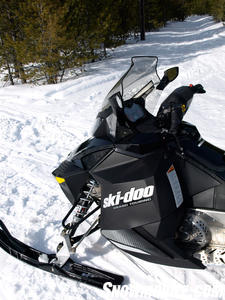 It was a cloudy not so nice day when we test rode the 2012 Grand Touring Sport with the ACE 600 in West Yellowstone. We immediately found ourselves grateful for the full touring windshield with its tall and wide wind coverage. The handgrip and thumb warmer controls proved well positioned and workable with a quick touch to get a higher or lower heat setting. The sled rode well over the okay groomed trails and proved quite adept at bridging the rutted sections. Steering was light and the skis gripped well. We didn’t feel any abnormal reluctance for the sled to turn into the corners despite the longer 137-inch track length. The handling proved better than anticipated. We figure the tucked back of the skis drivetrain positioning adds to that balanced feel.

When you blend in the economy of the new four-stroke engine with its very adept drive system and the overall on-trail handling prowess, you realize that Ski-Doo’s budget two-up is quite a bargain. It’s quiet. It’s easy on fuel. It’s smooth on the trail. And it will be more reliable than a winter snow forecast. 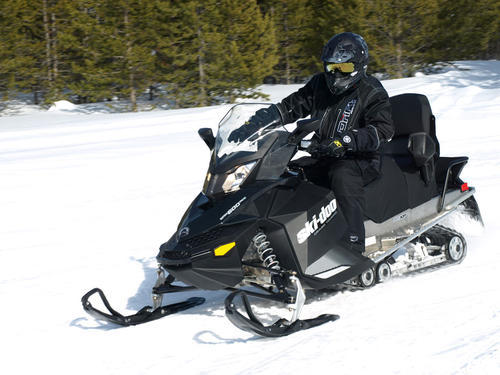 For 2012 Ski-Doo manages to combine many of its best technological pieces in a budget touring sled that offers great value for many seasons of two-up adventure.