Snowmobiling is Freedom for Real Guys

A rant in favor of snowmobiling as freedom

For a guy that has made a rather nice livelihood from snowmobiling, I harbor a frequent love-hate relationship with it. The best times, the Love times, come when actually participating and riding the sleds. For me snowmobiling offers the same freedom that I used to get from my sailboat. How odd. Sleds use gas and oil. Sailboats use wind.

Think about this, though. Whether you snowmobile or sail, every riding day is different from the one before or the one after. They may be similar, but they are always different. Huh?

When we snowmobile, conditions are rarely if ever the same. The day may be cloudy or sunny, which can impact trail conditions for riding. Clouds and sun impact wind and water for sailing. During the ride or the sail outing, conditions can change. Have you ever headed out on the trail and the sun was bright, but by early afternoon you could see a storm heading your way and the sky would get dark, almost black? The wind comes up. Snow falls fast and makes it hard to see the trail. But, you adapt, because that is what experienced snowmobilers do. As a precaution you may check a map for nearby fuel stops and you will assess both your ride’s progress and, perhaps, readjust your estimated arrival time back at the trailhead or the day’s final destination. 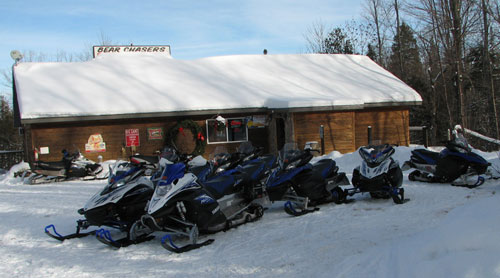 Camaraderie gathers at the pit stops along a snowmobile route.

When sailing you can slip out in calm water, enjoy maneuvers and relax in the one-on-one challenge that comes with single-handing a small sailboat. But, on a big lake, a squall can come on you very quickly. The water goes from quiet to peaking waves and the wind can change direction making a return to your slip a challenge at best. Waves on shallow lakes can hoist your boat on a crest and crash it down in a trough. It can get exciting. 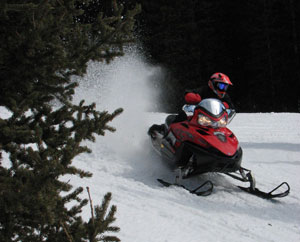 Snowmobiling offers a freedom that brings together athletic skills, great scenery and the great feeling of just being a guy.

But both provide the freedom for you to meet challenge head on and master each day as different ones. Similar? Yes. The same? No.

Snow, like wind and water conditions, can change. When we test ride sleds in the West during the early spring, the trails can be slick and hard. After lunch that same trail may be slushy from the sun. The sleds handle entirely differently. We have to factor in that change as we ride. We have to envision how a test ride of one sled at one time of day relates to a similar, perhaps a competitive, sled later on. It would be easy to judge a sled by conditions and if they are the same for all models ridden, we can. Generally, we ride sleds at different times of the day. All things are not equal, but we use our experience to gauge how sleds in similar categories rate against each other.

A couple of years ago, we went on a sled maker’s long test ride of a new model. The trail up front was freshly groomed. We were at the back of the pack. After a dozen riders on the same model sled tore through the corners up ahead, we realized that our experience was substantially different from the one the leader’s enjoyed. If you have ridden in a large group on a snowmobile safari, you know how back end riders can find themselves going along quite a bit faster as they try to catch up to the main body. Stops at road crossings can split the group if ride discipline is lax. 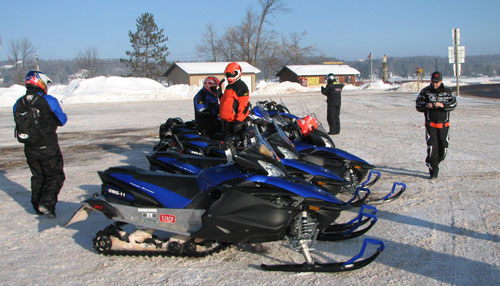 Most guys prefer small groups of trusted riding buddies for their days in the saddle.

Maybe that’s why many of us prefer to ride in small groups or even pairs or threesomes of trusted riders with similar riding styles. A good trail riding buddy truly makes snowmobiling a great time. You can trust that he will not do something stupid, that he knows how to ride quickly and safely. Trust is the key. You have each other’s best interest at heart. Of course, that’s not to say that you won’t tease each other at trail stops along the way. That’s just part of being a guy. 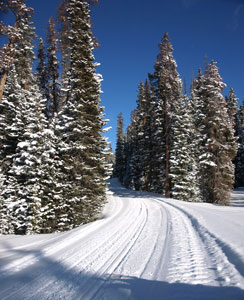 How can you not appreciate mountain riding with its scenery and invitingly open trails?

Now here’s a rant. How has is come to pass that guys can’t be guys anymore? Why do guys have to be such wienies? Is it the fact that we don’t keep score at kid’s baseball or soccer games? You win or you don’t. Can’t say that I know many wienie snowmobile guys. You go fast or you don’t. You wait for your buddy to catch up. If he can’t keep up, chances are he doesn’t get invited the next time you go riding. He’ll go with a group that makes him more comfortable or, if you are truly great friends, maybe you’ll slow down a bit. Does that make you a wienie?

When you’re out on a trail ride and end the day after having had a great time, do you all group hug after loading up your sleds and getting in your trucks to drive home? A nice mitted fist bump, a handshake or a simple nod of the head says it for me: “Had a great time. Let’s do it again.” Nothing terribly emotional about that. It’s what guys do.

I say this because it seems that movies and television shows have become a bit emasculating. Give me a good ol’ Tim Allen “Tool Time” grunt and the freedom to be a guy, unencumbered by what some feminized stereotype thinks a guy is. Advertising strikes me as offensive toward guys. Ever notice how many Dads are portrayed as subservient and clueless. Would you really want to be dug into a foxhole counting on that guy? Confident, competent… is that too much to ask? 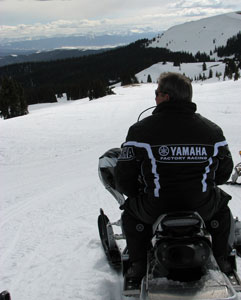 You can be a guy and still stop to appreciate the wonder of nature.

Take those TV wienie guys snowmobiling. Give them a taste of freedom. Let them figure out how to handle the power of an 800cc 150 horsepower twin and real winter cold. Handle it? Heck, laugh at it. When the weathercasters warn of severe cold — like 10 above — instead of being shamed into staying off the highways, snowmobilers are saddled up, shields slapped down, engines fired up and throttling into snow-covered turns.

What is this with weathercasters? Here in the Snowmobile.com Midwestern USA editorial offices, we get our television winter weather from a blonde who came to the local station from, wait for it — southwest Florida! And, of course, “wind chill” warnings have been vacated in favor or “extreme cold” warnings, a more nebulous term.

Good grief, we can’t escape the dumbing down, unless we get away on a snowmobile. For me, snowmobiling remains as one of the last bastions of freedom and guy-dom!

Related Reading My Born-Again “First Ride” Snow is THE Answer What’s Coming for 2013? What’s Old Is New Again Have We Seen the Future of Snowmobiles?