Whether you leave work every winter’s day, get home, put on your snowmobile suit and hit the trails or simply wait for the weekend to trailer to a favorite destination with the family or the guys, your trail sled of choice is likely Ski-Doo’s MXZ 600. The 2012 version of Ski-Doo’s MXZ TNT 600 E-TEC is as rider-friendly a sled as you’ll find. The engine makes good use of Rotax’s latest computerized direct injection for 120-plus horsepower that responds crisply to the throttle flipper while providing strong torque for pulling the latest REV-X chassis out of a corner. Everything about the Ski-Doo MXZ TNT just seems to feel right, comfortably familiar whether it’s the first ride of the season or the final one.

But, as we head into the 2012 model year, the base line Ski-Doo MXZ 600 E-TEC faces some serious competition that makes us suspect that it won’t be long before there’s an upgrade. We aren’t thinking that the engine will get a big do-over because, for one thing, Ski-Doo has sunk a lot of engineering time and money into its electronic technologies to clean up emissions and make it more fuel and oil efficient without sacrificing performance or adding substantive weight. We do suspect that the styling and chassis may get a refinement and along with it will be seriously refined front and rear suspensions. 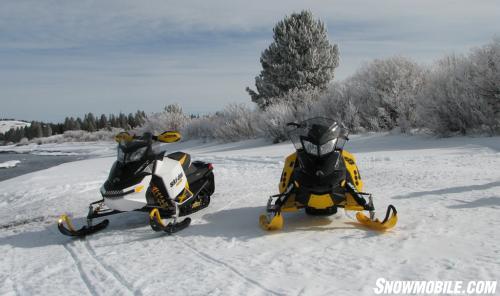 Ski-Doo’s MXZ model line includes a “base” yellow and black with a 600 ETEC or variants from a white and black four-stroker to a rapid response 800cc racer XRS.

The SC-5 rear suspension will likely evolve more toward the limited availability of the rMotion design that came in a “spring only” pre-season offer. For now the SC-5 production cost will keep it as the standard suspension basic. But, depending on how the new rMotion design proves out with consumers and whether the company can keep manufacturing costs in line, some derivative of rMotion should appear as a “new” standard suspension choice, just as Polaris has conjured up the ProRide in its Rush and new Switchback models. 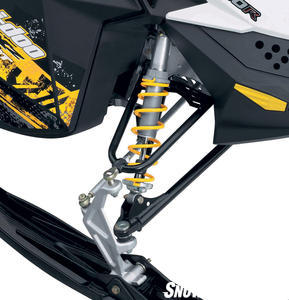 The basic MXZ front suspension consists of tubular A-Arms that offer up to 9-inches of travel and are controlled by various shocks packages depending on the model.

The Ski-Doo MXZ 600 E-TEC set the standard for short track trail sleds for a reason. It is extremely easy to ride. Its rider ergonomics are excellent. If you don’t think so, check out the competition, especially the Polaris Rush. If you go to a snowmobile show where both Ski-Doo and Polaris sleds are available for a “test sit,” get yourself on board each one. Hunker in behind the handlebars of each. Tell us that they are substantially different when you peer through the windshields. We’ve ridden both back-to-back and came away suspecting that, at least ride-wise, Polaris had the REV chassis ergonomics in its ride profile when creating the “feel” of the Rush. Guess that tells you the ride choice standard among the competition. Yamaha’s Nytro sport sled has a familiar REV-like feel to it as well.

But, in this century, at least, Ski-Doo rarely remains stagnant. About the time the competition seems to catch up, the Valcourt, Quebec based sled maker changes the game a bit. How can Ski-Doo change one of the most popular trail sleds in modern snowmobiling? We’re not engineers and like the vast majority of MXZ fans; we’re very satisfied with the basics.

As we get to ride the MXZ’s main competitors with some frequency, we tend to forget just what a big deal the REV was. That whole rider-forward thing came from the 2002-2003 Ski-Doo MXZ and totally revamped how we ride. For the better! The newest REV platform that makes up the 2012 “base” Ski-Doo MXZ smoothed out the wrinkles in the original by giving a bit more room for the rider’s knees and some stretch out saddle space for relaxing on a long corridor trail ride. The idea of allowing the rider to slip forward toward the skis and become part of the sled’s central mass to attack the trail remains as intended originally.

The REV platform runningboards are great for support but also for clearing snow to prevent ice build up. 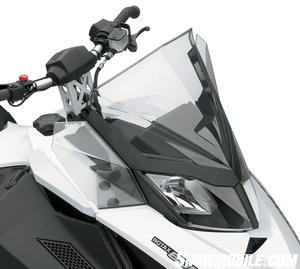 Although sitting low and sporty, the MXZ windshield with its side deflectors is very effective on a cold day’s ride.

The key difference between MXZ models centers around features. The base “value” MXZ is the TNT, a name that goes back to the 1970s and which brought “racing” style and features from the track to the trail. The concept remains but today’s TNT has been supplanted by a couple of layers of performance. The “X” package adds more suspension shock features, plus the availability of the rMotion limited production rear suspension, as well as more sport performance styling in the seat, addition of handguards and color option. The top rung MXZ is the racer-like RS with stiffer handling shocks and a real racer-look. For solid value and everyday riding pleasure, the MXZ TNT 600 E-TEC is hard to beat, plus you’ll save more than a thousand bucks. 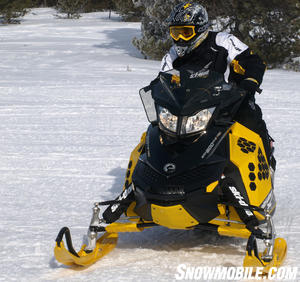 Regardless of the base version MXZ you get, there are an incredible number of customization options from shock covers to bags to decorative “wraps.”

The “base” MXZ TNT 600 E-TEC sits on the same REV-X chassis. It has a Brembo brake to decelerate the same 600 E-TEC you’d have on either similarly powered but more costly “X” or “RS” models. The package of HPG Plus shocks front and rear will be plenty good for the vast majority of riders. And the RipSaw rubber track with 1.25-inch gripper profile would be the same as on the “X” version. You get end hooks on the handlebars, a narrowed profile seat, push-button electronic reverse, wind-deflecting windshield and complement of gauges.

If you want, you can pony up another grand for essentially the same level of straight ahead performance with a few more bells and whistles that may soothe your “gotta have it” ego, but at the end of the trail, you’d find the 2012 Ski-Doo MXZ TNT 600 E-TEC would be all that you ever needed — or really wanted. If you want more — or less — the TNT series offers that as well. You can power up to an 800cc twin or power down to a 550 fan-cooled two-stroke or the very fuel-efficient ACE 600 four-stroke.

As Ski-Doo’s competitors know all too well, the “base” MXZ, no matter what engine flavor, fills the bill for trail sled happiness. Now, though, with the competition closing on the MXZ product-wise, we expect Ski-Doo to raise the ante and competitors angst once again in the upcoming seasons. It just seems to be something that Ski-Doo does —staying ahead of the competition through product innovation.