“Progression not recession,” a positive mental attitude statement I saw on a business sign not long ago, reminded me of BRP for its looking-forward attitude. Here’s an example, for model-year 2013 (MY13), Ski-Doo progressed its Summit, far ahead of any Summit it has built before. Does this mean Ski-Doo’s Freeride is a forgotten backcountry realist? Has it recessed? No. The Freeride is for the free thinker who believes everything is legal…until they get caught.

The 2013 Freeride is a different kind of mountain snowmobile that beckons non-traditional mountain riders to ride it; it is not old school. As I tell many friends, the Freeride is a snowmobile for baggy pants set who distance themselves from the 40-and-older club.

For 2013 the Freeride is virtually the same Freeride as MY12. For 2013 it comes in a military green color called Squadron Green that matches a rider’s Metal Mulisha out-of-bounds thinking. Kicking the Freeride off a ledge for a free fall works, as this sled is a master at flying and dropping.

The Freeride is juiced by Ski-Doo’s highly reliable 800 E-TEC. The Rotax-built 799.5cc E-TEC twin cylinder two-stroke with electronic direct fuel injection freely rolls out about 164 horsepower. It comes in several track lengths, 137, 146 and 154.

The Freeride’s ability to carve in the powder and around trees comes from its excellent handlebars that match hand and arm curve, and are at a width that nearly matches shoulder width. 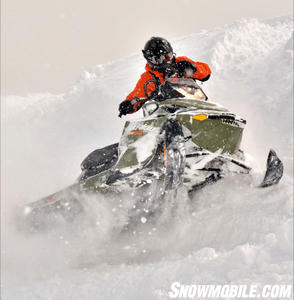 The Freeride is a mountain sled that likes deep powder and can grab a sidehill.

The narrow and rounded REX-XP X seat is grippy, comfortable and at a height that allows an easy transition from sitting to standing. Its length does not stop a rider’s leg from swinging side-to-side.

The Freeride’s REV-XP RS chassis with its SC-5MR-2 rising rate rear suspension gives the vehicle the stamina to soak moguls, drops, and jumps; also give credit to its high end shocks. Though Ski-Doo declares the Freeride as an extreme backcountry mountain snowmobile, it is not an XM Summit. It does not come equipped with the XM’s tMotion rear suspension, flex edge track and open foot wells. The Freeride is built for riders who use a machine in an extreme way where a wide snocross style front end is needed for stable jumping, and a heavy and highly reinforced rear suspension is needed to absorb impact energy from long drops off a mountain cornice.

I do not want to give the impression the XM is not an extreme powder sled. By all means, the XM Summit X and SP are in their own way and birthright, “extreme.”

The 146 and 137 Freerides are quick in the trees, especially when the powder is ultra-deep; the 16-inch wide tracks do not cut down the Freeride’s agility. However, we learned the longer 154 lacks the whip-it attitude the shorter Freeride’s have, but makes up mojo by being a deep-powder floater. If I were to settle on a Freeride, I would gravitate to the 146 first, the 137 second, then the 154 last. That is me and my simple preference – there is no right or wrong here. To me, short and tall is fun. The Freeride’s E-Tec 800 motor has the torque and horsepower to keep powder playing at max.

The E-TEC 800R engine is smooth and is sneaky in calling out its horsepower. The 16-inch wide track attacks the snow and to lift the Freeride’s nose.

The drive and driven clutches respond well to motor speed (RPM) and track load. When snow conditions and elevations change, Freeride drivers can easily tune the QRS driven clutch for such.

The Freeride concept is to appeal to the younger rider – that freestyle rider that likes to jump, drop off cornices and perform extreme maneuvers, such as high-flying whips. A new generation of snowmobilers has emerged that likes to push body, snowmobile and gravity to the limit.

The Freeride’s mission is to compete with Polaris’ Assault and Arctic Cat’s HCR. Sleds designed for the same appeal, but also with the agenda to compete in the Rocky Mountain Snowmobile Hillclimb Association (RMSHA) stock class. 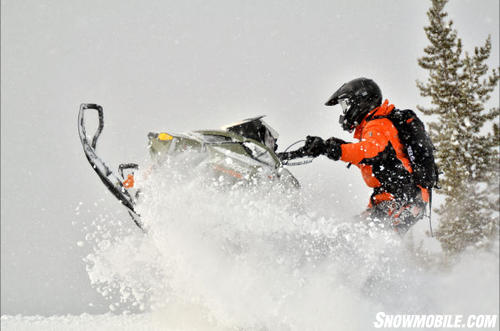 If you are a rider who likes to fly a sled, the Freeride is a blast. It has a characteristic, almost trademark-like, in that it flies flat and straight, which gives a rider confidence. The SC-5MR-2 rising rate rear suspension and REV-XP RS chassis never gives up a challenge.

The 2013 graphics and green military colors indicate it has attitude.

In closing, I look forward to the next Freeride model-year to see if some XM Summit engineering finds a home on the next generation Freeride. The current version is fun to ride but, as noted, it may not be the only extreme mountain sled in BRP’s mountain arsenal. The XM Summit X is also quite extreme in its own, albeit, traditional way.