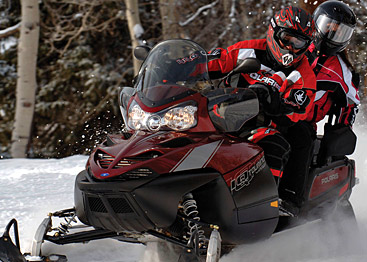 What Arctic Cat, Polaris and Yamaha may bring to market in the next year

Welcome to Part II of what we think may come in the year ahead. Previously, we gave you our opinions about what we felt may be coming from Ski-Doo for 2009. The following explores our thoughts about what we think Arctic Cat, Polaris and Yamaha might bring to market in the next year.

Here’s a sled maker faced with a dilemma. It makes a very fine line of snowmobiles, but there’s a lack of drama when compared to its preceding models. Hey, we appreciate the F series, but they just don’t get the blood thumping like the ol’ Firecats. Maybe that’s because the new sleds ride so much better and are so much more refined.

The breed of Cat can be adjusted to suit just about any rider. The seat can be raised or lowered. You could spend an afternoon playing with handlebar adjustments. Then there’s footrests and lord knows what else. 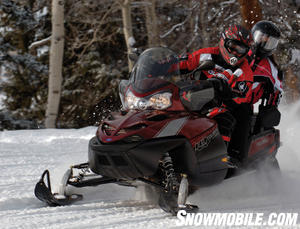 There’s a lot of a weight out front on the FST. Some kind of power steering would be a benefit. Is 2009 too early?
We predict that you will see a lighter weight sports model, loosely based on the snocross racer. Don’t expect that exact version, but one tricked out to give you a blend of smooth ride for groomed trail and long travel for rough moguls. The 600cc race engine may offer some tricks for a consumer based 600, but we don’t expect a direct cross over from race sled to trail sled.

You might also find that, like Polaris, some of the adjustments in the existing models might be pared back. Look for sleds with adjustments where the majority of riders want them. Just as Polaris drew back on its multi-position steering post, we expect Cat will ease off on some handlebar and seat adjustability. It would save complexity and, likely, weight and cost.

There may be an addition to the four-stroke family. Arctic Cat needs to get its emissions requirements in order with more emission-friendly motors. That might mean added four-stroke models.

Cat finds itself in a bit of limbo as it tries to keep its incredibly loyal ridership hungry but needs to meet federal emission standards, too. Do the two fall hand-in-hand? We think not! Loyal Cat riders want light and fast, high-flying speedsters able to bang in the ditches better than any other sleds. Cat engineers can make those sleds, but at the expense of federal mandated standards?

We think that Cat may come with a special model or two, one for the ditch pounders and one for the powder hounds to keep loyal riders loyal in the Midwest and West. The main line of Cats is not that old and development costs must be amortized before the engineering crew can go totally crazy and reinvent the Firecat. But a single, lightweight, high performance platform from which you could offer a ditch banger and a long track powder machine might just meet the needs of Cat fanciers for 2009. 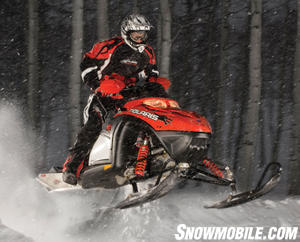 Cat says it won’t happen, but a consumer version of this racer would create some serious excitement for 2009.
Polaris

Give these guys credit. As challenged as they were with the Fusion, they have rebounded and given us some very nice trail machines. Those 600cc and 700cc sports sleds—Switchbacks and Dragons—are very good.

And, after spending some quality time with a Cleanfire 600, we may finally give the engine edge to Polaris over our beloved Rotax 600 SDI. That Cleanfire set up is precise under all trail conditions. There’s a bit more power from the Polaris-built Liberty 600 than we realized from just new model testing where you tend to jump from model to model and really don’t spend any quality time with any one sled. The 700 is good, but if we were to buy just one sled for its powerplant, it would be a Cleanfire 600-powered something.

With Polaris dealers able to clean out their backlog of 2005, 2006 and 2007 models, we expect that the company’s decision to reduce manufacturing will mean cleaner dealerships for 2009 models. But it also means dealers have to be wary of the economics. Did sleds move because they were non-currents selling for loss leader prices, or were they sold because snowmobilers want on the snow at any price? We won’t speculate on that for now. We don’t know what impact real world economics will have when consumers look at buying new with higher priced models staring them in the purse. We do think that, despite its name (Shift), the low cost IQ model was a good idea. It creates the illusion that there are brand new models of a sporty nature that can be had for not a lot of scratch. It is a good value.

Unlike Arctic Cat, Polaris controls its own destiny with its own engine supply. What the company needs to do is create a superior four-stroke of its own, or buy into BRP’s E-TEC technology (or something similar) for its two-strokes. Government-mandated emissions limits are real and could get tighter depending on which administration comes to Washington next year. Snowmobiling may come under more fire (as will other powersports) in the next four years, so there’s another reason to truly enjoy the current snow season. We view Polaris and Arctic Cat as the two more vulnerable snowmobile companies when it comes to new, more restrictive standards. Ski-Doo has Rotax and Evinrude’s E-TEC, while Yamaha has its conversion to four-strokes well underway. Arctic Cat must rely on its partnership with Suzuki and Polaris is still relatively new to engine building, though the Liberty has been a quality design.

Exclude those problems and what do we see for 2009? How about a lighter Dragon-style model to take a bite out of Ski-Doo’s REV XP platform? Polaris had been one of the lightest models until Ski-Doo shocked everyone with the T’NT and its weight of just under 400-pounds. We doubt that sat well with Polaris. Look for a bit more firepower, too. How about a brutally fast and powerful mogul crusher and an equally dominant mountain model? We figure that Polaris will tweak its trail and two-up line, but don’t see anything significant there from anyone.

While we know that Yamaha has been working on electric power steering, Polaris could really use it on its four-stroke turbo models, which put too much weight out over the skis. Maybe not next season, but certainly a few seasons ahead, if Polaris stays with its Weber-based four-stroke models, we would expect a form of power steering for those models. Lightening up the steering would really help those stretch-tracked cruiser and touring models.

But for now, we expect 2009 will bring tweaks, lighter weight and maybe a new sports model with an evolutionary A-arm front end and improved rough trail handling. 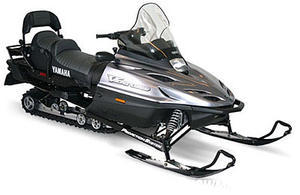 While Yamaha is all 4strokes in the USA, you can find a few 2strokers like the Venture XL in other snow countries.
Yamaha

Will that electric power steering concept come to Yamaha sport models? And what’s left for Yamaha? The horsepower niches are settled in at 150 (Apex), 130 (Nytro), 120 (Vector) and 80 (Phazer). Is there room for a 100-horsepower model and, if so, what would it be?

Yamaha has surprised us each of the last five seasons. We really didn’t anticipate the Phazer at all. Yes, it seemed logical once we saw it, but it certainly required a major commitment by Yamaha to the snowmobile industry that we questioned at the time. Now, looking back, we are quite amazed at Yamaha’s commitment.

The conversion to four-strokes is complete—except in some countries where you can still find the outdated remnants of a two-stroke like the Bravo 250 or Venture XL. Yamaha in the United States battles with the other three manufacturers as it promotes its performance four-strokes against their performance two-strokes. Weight and emissions seem to be the battle lines.

Yamaha did a marvelous job of eradicating pounds in its all-new Nytro, but Ski-Doo’s REV XP undercut that news in big fashion with a major Jenny Craig weight loss! Still, the Nytro is a real-deal big bump sled with strong power-to-weight and a wonderful, brutish triple-cylinder powerplant.

What do we see for Yamaha in 2009? Don’t be shocked if there is a 100-hp model. It may be an ‘Exciter’ version of a Phazer-like twin. With the 80-hp Phazer engine pretty tweaked out to get that much power, we’d expect a longer, wider chassis with a new two-cylinder motor. If you drop a cylinder from the Nytro triple you come up with potential for 90-100 horsepower from about 700cc. We’d think that would make the most sense because unlike the Phazer twin and the Apex engine design, there wouldn’t be any need for gear reduction as the Nytro triple and Vector triple are designed for direct PTO to drive clutch application.

Such an engine could find its way into a ‘starter’ family of touring sleds to expand the Vector series into a lower priced arena. (Though current pricing makes the base Vector quite a solid value as it is.)

If there were a new 100-hp version loosely based on the Phazer, we would hope that basic geometry and balance would be revisited as we feel that the Phazer is a bit off. Either a repositioning of the engine—moved further forward—or at least some better skis and revised front suspension geometry, plus a look at the rear suspension’s weight transfer are imperative. We want to love the Phazer, because we are solidly behind the idea of it, but we can’t get comfortable with the existing version. It seems a bit off in its handling if you want to push it hard on the trail. The front end just doesn’t seem to bite well enough in a consistent manner to make us comfortable. We suspect that it has some balance issues in its design—too little weight in the front as result of having the drivetrain moved too far back in the design.

As for the Yamaha line, the Venture is due for a makeover. Could that come from moving it to the new Vector platform and stretching it out to accommodate a longer suspension and track?

The Apex could be updated, but we think that might get another season as Yamaha riders opt in for the Nytro and some tweaked versions of that model. Probably some weight will be shed from all Yamahas, but we expect the Nytro will be the focus for weight reduction. It’s about time for the addition of fuel injection on the 120-hp triples. A carbureted version could be a price leader.

Overall, Yamaha should be making good headway in market share, especially as the competition’s non-current inventory shrinks. Last year, a Yamaha spokesman told us that the biggest selling sled in the snowbelt was the non-current. Yamaha firmly believes that its four-stroke presence positions its brand for the future—though Ski-Doo and its E-TEC may have something to say about that.

The 2009 season should be a most interesting year. Let’s see how well—or, poorly—we fared in our suppositions. Time will tell.