Lost in all the Viper-talk, Yamaha’s Vector soldiers on as one, if not “the,” best snowmobile the company ever crafted. It’s certainly not the fastest Yamaha. The Apex holds that title. It’s not the most powerful. Again the Apex. It’s not the lightest. Think Phazer in the Yamaha line.

Why is it the best Yamaha? Because it owns the titles for durability, reliability, great value, easy to ride, and best long-term snowmobile investment – and probably not just for the Yamaha lineup, but also for all the sleds available for model year 2015. This is the Toyota Camry of snowmobiles; solid, reliable and an unchallenged best value. In some ways it is about as exciting as a Camry. 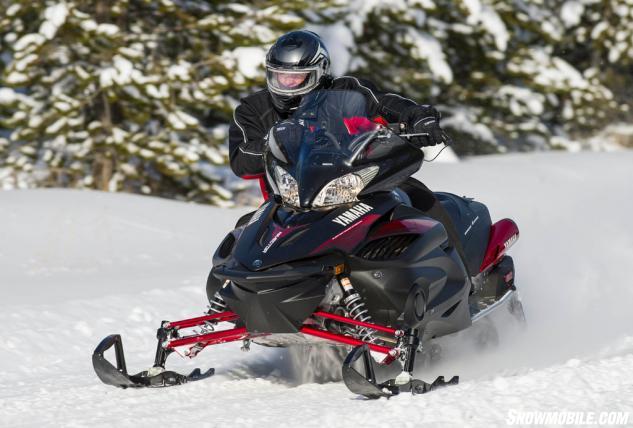 Yamaha’s Vector is not the fastest, or lightest sled, but it is one of the best thanks to its high quality construction, well-defined engineering and long term durability.

You know that you will get above average performance from the Vector’s three-cylinder four-stroke engine. It’ll get you good, not great, fuel economy thanks to an electronic fuel injection system that also makes it an easy and reliable starting sled all season long. Don’t take that for granted as our experience with various carbureted Yamaha products, including sleds, ATVs and motorcycles, has shown some of them to dislike cold temperatures to the point of them being cranky and reluctant runners until they had a chance to warm up to their operating temperatures. In sub-zero temperatures the Grizzly 660 ATV that we use to plow snow in the winter frequently insists on a quick shot of starter fluid to convince itself that it wants to move snow off the driveway. Our V-Star 650 was a reluctant starter in early autumn when morning temperatures dropped off to the 60s. But, then, our carbureted Ski-Doo MXZ 550 fan-cooled can be temperamental, too. The fuel injected Vector is not reluctant, not temperamental.

As we’ve noted, the primary benefit of EFI is vastly improved starting performance for snowmobile engines that have to fire up in extreme cold. EFI gives the engine a rich air-fuel mixture at the start and then leans out as the engine warms up. This capability of the Vector’s fuel injection system ensures stable performance from start-up through warm-up and for the duration of your ride.

Yamaha engineers added EFI for other reasons as well. EFI offers both improved fuel economy and cleaner emissions. Another benefit for Vector riders is the EFI’s ability to compensate for changes in altitude and other changes common in a daylong ride. The EFI’s “map” automatically controls the air-fuel mixture regardless of changes in air temperature, air pressure and engine temperature. 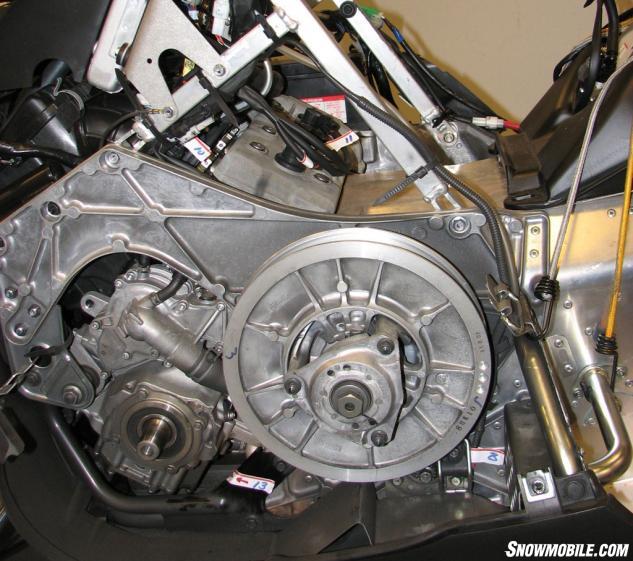 Yamaha’s focus on centralizing the Vector’s mass results in an engine placement that is low and forward to enhance to overall handling.

What most Vector riders enjoy about the sled is its drivability, which is another pre-programmed aspect of the power package that Yamaha engineers designed. Using the electronic capabilities of the digital system, engineers programmed the Vector for easier drivability in the practical use rpm range, especially that partial throttle acceleration “sweet spot” from 2000 to 5000 rpm that you use on a trail ride.

The way the Vector’s engine performs from the first twist of the starter key is purely intentional – and incredibly well thought out by Yamaha engineers. Indeed, the Vector triple was the first of Yamaha’s so-called “light sport four-stroke” models. Initially the Vector’s three-cylinder design was borrowed from Yamaha’s FJR1300 motorcycle and became the familiar carbureted 973cc engine that still powers the utilitarian 2015 RS Venture. While the 973cc version proved durable and reliable, Yamaha knew that it needed to add electronic fuel injection to stay credible with the competition’s’ new four-stroke entries like Ski-Doo’s 1200 4-TEC and the Suzuki twin that was appearing in select Arctic Cats. If the desire was to make the Vector powerplant smoother and more efficient, why not make it bigger and a bit more powerful with enhanced torque to make it more rider-friendly.

Yamaha not only added electronic fuel injection, but also bored out the cylinders from 79mm to 82mm for a bump in displacement to 1049cc, where it remains. Since the inception of the “973” engine, Yamaha engineering had progressed and the new “1049” actually lost about 4.5 pounds thanks to revisions in crankshaft and cylinder head designs. In addition, the new engine’s reliability improved versus the “973” thanks to the use of use of low-pressure casting in parts like the uppercase and the closed deck cylinder, which provided greater rigidity for more stable performance. The Vector’s reputation for reliability was truly engineered in from the start. 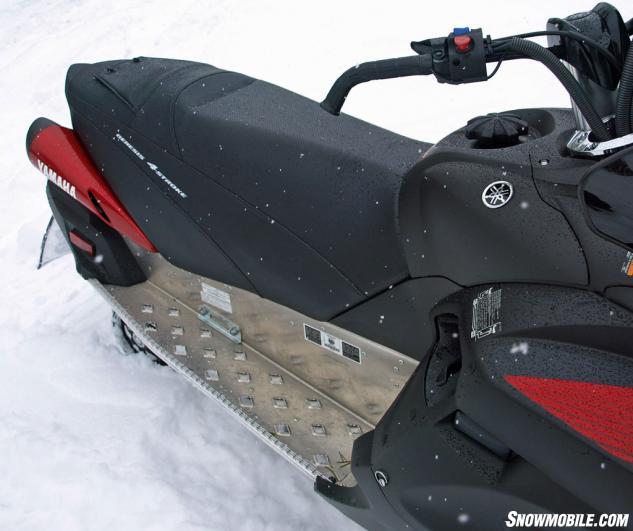 Once underway, the Vector uses Yamaha drive and driven clutching to transfer the four-stroke’s generous torque into readily useable “spin-power” to the sled’s 121-inch long Camoplast Ripsaw track. Advancements in drivetrain technology virtually eliminate any grip-and-go ratcheting that sometimes occurred as you grabbed a handful of throttle after a stop. Developed expressly to work with the Ripsaw track, the extrovert drivers on the front axle do not slip, giving you full power all the time. 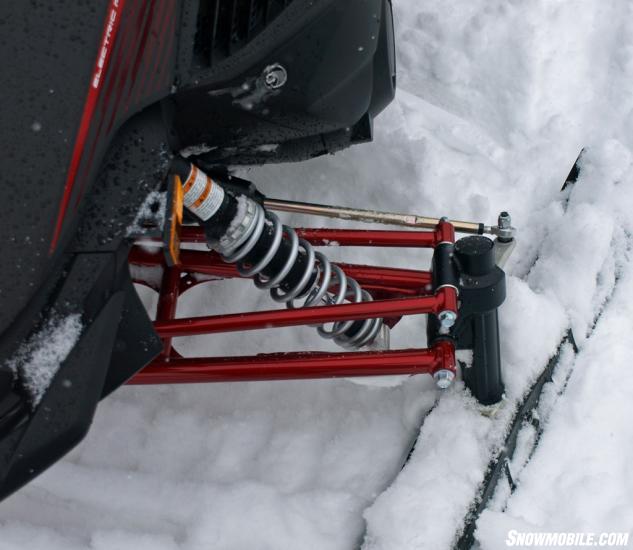 There are few surprises in this latest Vector as it continues with the upgrades made in the past few seasons. Just as the suspensions will be familiar, so will the tall, lightweight saddle. The design uses ample firm foam padding and puts the rider forward to allow for easy stand-up positioning over bumpy sections.

Electricronic power steering (EPS) comes standard and truly makes a difference over a day’s ride. On slow, tight trails the EPS is programmed to maximize assistance, dropping off as speeds increase. Also helping reduce ride-fatigue are the well-positioned, curved handlebars and the use of new-for-2015 Yamaha Tuner Dual Keel skis, which are claimed to keep the ski tracking straight and eliminating darting. We agree that the skis help reduce darting. 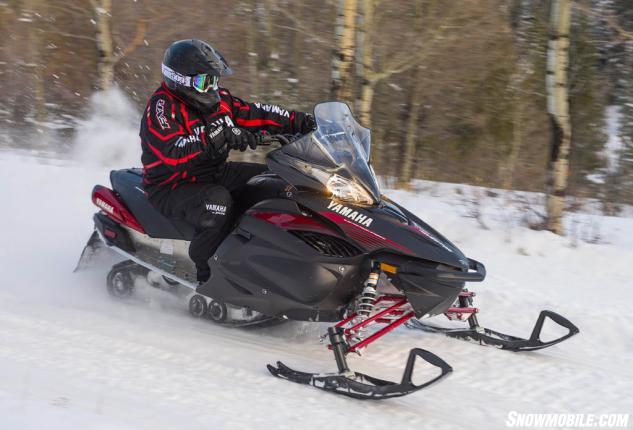 What sets these factory-supplied skis apart is the dual keel, which can be set up with four different wear bar configurations. Simply stated, you determine how you want to set your sled’s cornering bite and steering effort.

Obviously the Viper series of Yamaha snowmobiles gets the attention at the dealerships, but when you look at the Vector’s all-Yamaha build quality compared to the Viper’s quality, well, you know that “Yamaha” logo on the hood represents exactly what you Yamaha owners have come to expect from this company’s models. The workmanship and overall quality of this Yamaha-built Vector are excellent and assure you of years of lasting value. And, the Vector carries a lower price tag, too.

There is value in the Vector and if you are the type of rider who wants established quality and long-term reliability in your snowmobile, you have to consider the 2015 Yamaha Vector. It works. It gives you premium value and it can be considered one of the best sleds that Yamaha offers for 2015. Or, maybe, even ever!