A Hall of Fame volunteer

International Snowmobile Hall of Fame, founder honor those who keep the sport alive and trails open

Elmer Cone of Bovey, Minn. founded the International Snowmobile Hall of Fame (ISHOF) with one purpose in mind—to honor the men and women who help make snowmobiling such a great winter activity.

While the honorees over the years have included snowmobiling legends—among them the three Polaris founders David Johnson and brothers Allan and Edgar Hetteen, as well as Ski-Doo founder J-Armand Bombardier—Cone reserves a special appreciation for the lesser known cadre of volunteers who toil in anonymity but have always shouldered the burden of creating, maintaining and protecting the sport. 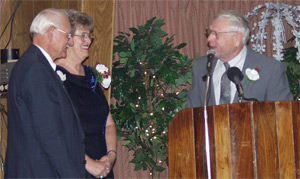 Elmer Cone, right, honors Anne and Dick Mellick as they are inducted into the International Snowmobile Hall of Fame in Grand Rapids, Minn.

He identifies with this group because for more than three decades he has been one of them. A quarter century ago, Cone co-founded an alliance of snowmobilers, local community and county officials in northern Minnesota’s Itasca County. Involved in creating and maintaining snowmobile routes in Itasca County since the mid-1960s, Cone was well aware that while snowmobilers worked hard to build trails, they needed funding to maintain them.

“We know that county employees can’t be expected to be out grooming trails at 2AM,” says Cone. “But we also know that snowmobilers would do it for free. We just needed some support and organization to get the job done.”

Working through the alliance, Cone’s group was able to gain permissions to construct trails from local landowners. Some of those ‘local’ landowners, such as Blandin Paper, held the rights to vast tracts of forests. Those forests were the basis for making Blandin’s paper products. This huge resource led to the creation of miles of snowmobile trails in the area and helped make Grand Rapids, Itasca County’s largest city, a winter destination for snowmobilers across the Midwest.

This alliance worked together to unify clubs and fill the need for snowmobile trails. It also found ways to build and fund new routes.

Cone bought his first snowmobile in 1963. He used it to pull his kids around his snow-covered property. But then his children discovered it was a great way to get to their friends’ houses. To make sure the route was safe and off the local roadway, he cut a trail to neighboring homes.

The Cone kids piled on the miles and by 1967 Elmer owned a 634cc Hirth-engined Arctic Cat. Of course, says Elmer, “I had to have it for ice fishing. That cleated track on those Arctic Cats worked better than rubber tracks and they could really climb.”

His personal involvement with snowmobiling and his soft spot for volunteers continues to this day. He has been involved with virtually every snowmobile club in the county. His local involvement grew into ties with the statewide Minnesota United Snowmobilers Association (MN-USA), which continues to the present. Through his activity with Minnesota and Itasca County snowmobiling, Cone has been recognized as one of the sport’s preeminent volunteers. Last year he was inducted into the Hall of Fame, which he created more than a decade earlier.

With his experience in creating trails, Cone understands a simple fact: no trails, no sport. He is concerned about the sport’s future, because he fears that “the younger generation does not want to get involved with the clubs and maintain the sport.

“In the old days, snowmobiling came first. We got out and made trails. We groomed them. Those early groomers weren’t always reliable so we would carry a power welder along with us to put them back together when they fell apart on the trail. The trails had to be groomed and we did it. Today, clubs can’t find people to work on trails.”

A realist, Cone recognizes that all-terrain vehicles have supplanted snowmobiles in some ways. ATVs can be used all year long. But, he notes, ATVers still want to go places—and they need trails to do that.

“I’m a consultant with the county on behalf of developing ATV clubs like we did snowmobile clubs,” says Cone. “Working with various user groups and land resource groups like the state of Minnesota as well as mining and paper companies, we have been able to create a vision for future land use.”

Cone explains that his group can foresee ATV trails six-feet wide and one-way loop trails worked into snowmobile trail systems for winter recreation. But he recognizes that volunteers and clubs are critical to this future.

“If you aren’t in a club then you get what ‘they’ give you,” he states bluntly. “But if you are in a club, you have a voice and you can get work to get what you need. It’s simple. Join together or get what they want to give you.”

In his decades of volunteering and working to create recreation trails, Elmer Cone knows firsthand how thankless a volunteer’s efforts may seem at times. That’s why he promotes volunteerism and honors volunteers in the. More volunteers will be honored in February as ISHOF members and supporters gather together in Grand Rapids to induct a new class of deserving snowmobilers into its special circle of snowmobile heroes. Elmer Cone will preside.