EXUP is a welcome addition to snowmobiling

Motorcyclists probably wonder what all the hubbub is surrounding Yamaha’s announcement that it placed its EXUP exhaust system in a snowmobile. After all, EXUP is old technology for Yama-bikers. The system appeared more than two decades ago on a 1987 Yamaha FZR400R. If you attend a current motorcycle show or visit a Yamaha motorcycle dealership, you can see a variety of EXUP applications.

Since we are a lowly cruiser motorcyclist and our last Yamaha motorcycle experience came aboard a low-power VStar 650, we never occasioned to ride an EXUP-equipped Yamaha motorcycle. Even though we once edited a motorcycle magazine, it was a few years before EXUP (Yamaha’s Exhaust Ultimate Power Valve) technology. We did, however, occasion to ride a production version of Yamaha’s turbocharged Seca 650 back in the early 1980s. That was a scary bike and one reason we are put off by spikey engine mods that hit uncontrollably hard at what seems like the wrong time. That is also the primary reason we totally approve of controlled power like the linear torque you get from Yamaha’s latest Genesis high performance four-cylinder, four-stroke snowmobile motor.

Interestingly, even though EXUP probably adds some peak power, this year Yamaha decided to drop peak horsepower numbers. As a cynical observer of the sled market for a few decades, we see this rationale whenever a player cannot compete specification-wise with another competitor who promotes power. Can we say that Yamaha’s previous 150 horsepower rating for its Genesis 150 quad might seem inadequate up against Arctic Cat’s 170-plus for its turbocharged four-stroke twin?

If you don’t automatically buy into peak power then you will find the newest Yamaha quad will be entirely satisfactory for your needs. The sled with its EXUP exhaust system delivers solid torque as soon as your twist the key start. That’s the beauty of the 2011 Genesis motor. It is totally revised from intake to exhaust to deliver what can only be described as linear power. The current 2011 Apex shares an on trail performance philosophy with its 1980s Exciter 570 predecessor. Rather than top speed, that sled highlighted corner-to-corner explosiveness. Of course, that proved to be a bit too conservative. The difference here is that the new Apex has a motor that runs at 10,200 revs and can generate respectable top end. This is no Exciter 570! 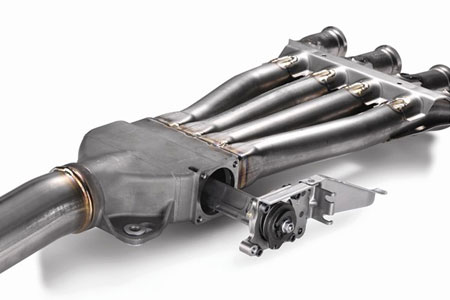 The Apex’ EXUP valve assembly fits between the headers and the muffler junction.

If you like to search online, you’ve probably run across a comment or two from semi- authorized sources such as the one that notes:  “Lots of talking on the horsepower. We (Yamaha) have decided not to publish horsepower figures in our marketing specs any longer… The big story on the engine is torque and the EXUP system (and) how it is used to control the exhaust pulse that puts a real dent on the torque curve. We have had to compromise some of the engine tuning in the past to limit the mid-range torque drop, which sacrificed some peak HP. With EXUP there is more torque right across the board with no dips and a slight increase in peak power in the neighborhood of 5%. The objective was to increase acceleration and throttle response corner to corner. Mission accomplished.”

If you add a conservative five percent to last year’s 150-hp spec, you get a power boost of about 7.5 horses for a total output of 157-plus. But Yamaha isn’t talking about that. The company is talking about the overall “feel” and that is real. 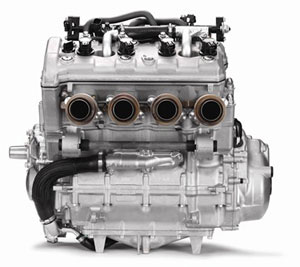 In the latest makeover of the Genesis four-cylinder, Yamaha engineering prepared the 998cc motor to accept the advantages of EXUP by totally reworking the intake. There are 11mm longer intake tracts reflected in the redesign of the airbox. The injectors have been relocated to allow improved dispersion and atomization of the fuel. The end result is vastly superior throttle response on this Genesis quad.

In its own specifications Yamaha seems a bit modest about the impact of EXUP, stating simply that it controls the exhaust pressure waves for optimum intake and exhaust efficiency. When you fire up this new quad, you’ll sense something is different. There is a new note to the exhaust. Part of that may come from the larger pipe size — 38mm on the 2011 versus 35mm on past year models.

But what you’re really sensing is the EXUP, which resides at the 4-into-1-exhaust junction. Those familiar with Yamaha’s motorcycle EXUP will recognize the similarities in the 2011 Apex. The variable EXUP valve assembly fits in the muffler area and works off a computerized sensor adjusting exhaust pressures based on a reading of engine revs, throttle opening and more. While the actual EXUP valve in the exhaust responds to the sensor commands, other information is relayed to the ignition system to optimize timing. 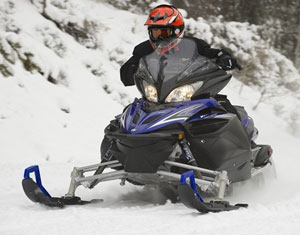 Use of EXUP adds an enhanced driveability to the 2011 Apex.

On engines in general, when the exhaust valve opens there’s a rush of combustion pressure exiting the cylinder and rushing to the exhaust pipe and muffler. Upon arrival this “positive” pressure wave expands and rebounds as a primary “negative” wave then heads back toward the cylinder. When engineers design a header pipe, they set a header pipe length to the brief instant when both intake and exhaust valves are slightly open. This results in a pulling of residual exhaust gas out of the cylinder and it also starts the flow of fresh fuel/air mixture through the intake valve.

There has to be compromise in these exhaust designs because of the fact that, regardless of engine rpm, both pressure waves move through the header at uniform speed, but at lower rpm the primary “negative” wave overlaps, allowing a primary “positive” wave in its place to force exhaust gasses back into the cylinder.

Before Yamaha offered EXUP as a solution, engineers had to choose between smooth power and total power. EXUP acts as a virtual throttle to control the pressure waves. Controlled via a microcomputerized servomotor between the header pipes and the muffler, the EXUP valve controls the pressure waves as it senses engine speed from the ignition.

There is some belief that an EXUP-equipped engine produces about 10 percent more top-end power than an engine without EXUP. Yamaha won’t verify that claim, nor will the company directly address the potential of a 30 to 40 percent increase in low- and midrange torque gain. Regardless of the actual numbers, there is a distinct “feeling” of vastly enhanced drivability and throttle response. 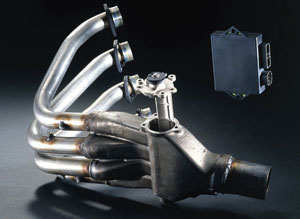 The EXUP system on a four-cylinder motorcycle engine also fits between the headers and the muffler junction.

The overall effect of the EXUP system can be felt immediately as it is reflected in a very smooth drive off, a strong and steady pull out of a corner and a boost when you hit the throttle from midrange to wide open as you seek top end on a long lake surface. There is virtually no peakiness anywhere in the power delivery.

According to Yamaha, past advantages of EXUP on its motorcycles has been cleaner exhaust emissions, more stable idling, smoother acceleration all along the power curve and improved fuel economy.

The only serious question mark we have with the EXUP is how durable are the cables that run from the sensor, under the seat and on to the actual valve assembly? There have been some reports of cable stretch on some EXUP-equipped motorcycles and we wonder what effect severe cold weather might add to normal maintenance. However, being very familiar with how Yamaha conducts its testing, we’re willing believe that Yamaha engineering has accounted for this contingency. New technologies rarely appear on Yamaha snowmobiles without undergoing some incredibly strenuous research and development.

Overall, we are really excited about the addition of the EXUP exhaust system to the 2011 Apex. Combine that with the lightened steering “feel” you get from Yamaha’s electronic power steering and you have a totally new sled tuned specifically for the serious (and not so serious) groomed trail rider. There’s a hearty note to this Apex exhaust that you can appreciate as soon as you start it up. That comes from the EXUP modulating the exhaust’s pressure waves. Those waves will modulate you from a smooth drive off right on past triple digits on the speedometer.

EXUP is a welcome addition to snowmobiling; even it has taken decades to get to us snowmobilers.