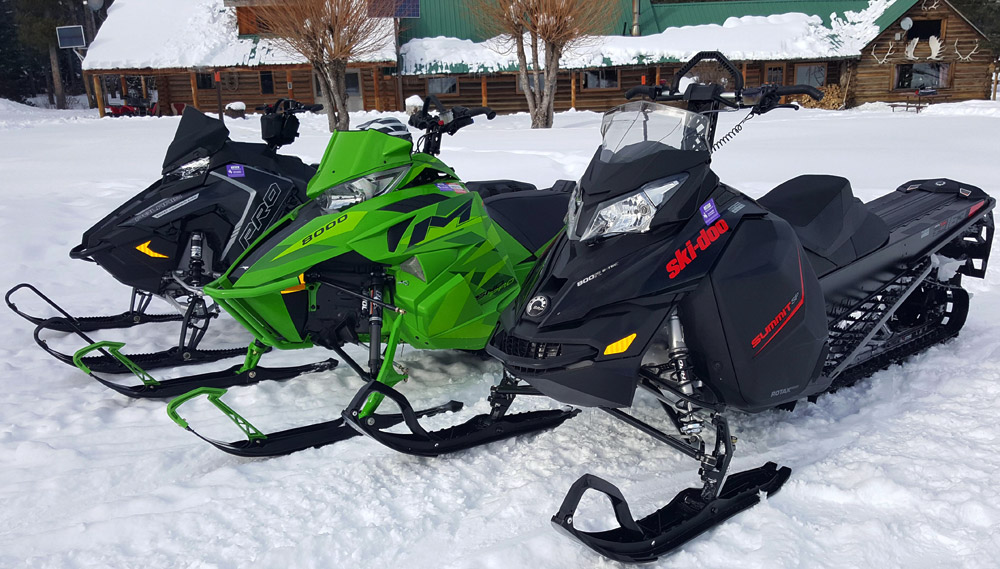 We look at weights, fuel economy, and speed runs from our three mountain competitors

Last year, Ski-Doo’s XM Summit X T3 163 won our 2015 Mountain Snowmobile Shootout, while its sister sled, the 174 T3, was also a favorite. The field has changed drastically for 2016. The 2016 Ski-Doo XM Summit SP 163 will try and defend Ski-Doo’s crown (the “X” model was a Spring-buy model only) against Polaris’ AXYS platform Pro-RMK and Arctic Cat’s much-improved M8000 Limited.

In fine fashion, the 800-class high-end mountain snowmobiles for model year 2016 proved they are a tight-knit group that debate well and trade equal punches. The only difference, really, between the three models is weight (the less weight the better). Following weight is balance, track performance, handlebar swing, and toe/foot placement and room (at the toe hold area).

For our shootout event, the snow conditions behind the stores and shops in Alpine, Wyo. were sparse and crusty one weekend and grunt-deep the next.

Before we document our two-weekend slugfest with weigh-ins, fuel mileage (combination trail and powder play), speed run results and guest-test rider scores and impressions in Part II, we must give our traditional last paragraph statement here early on. 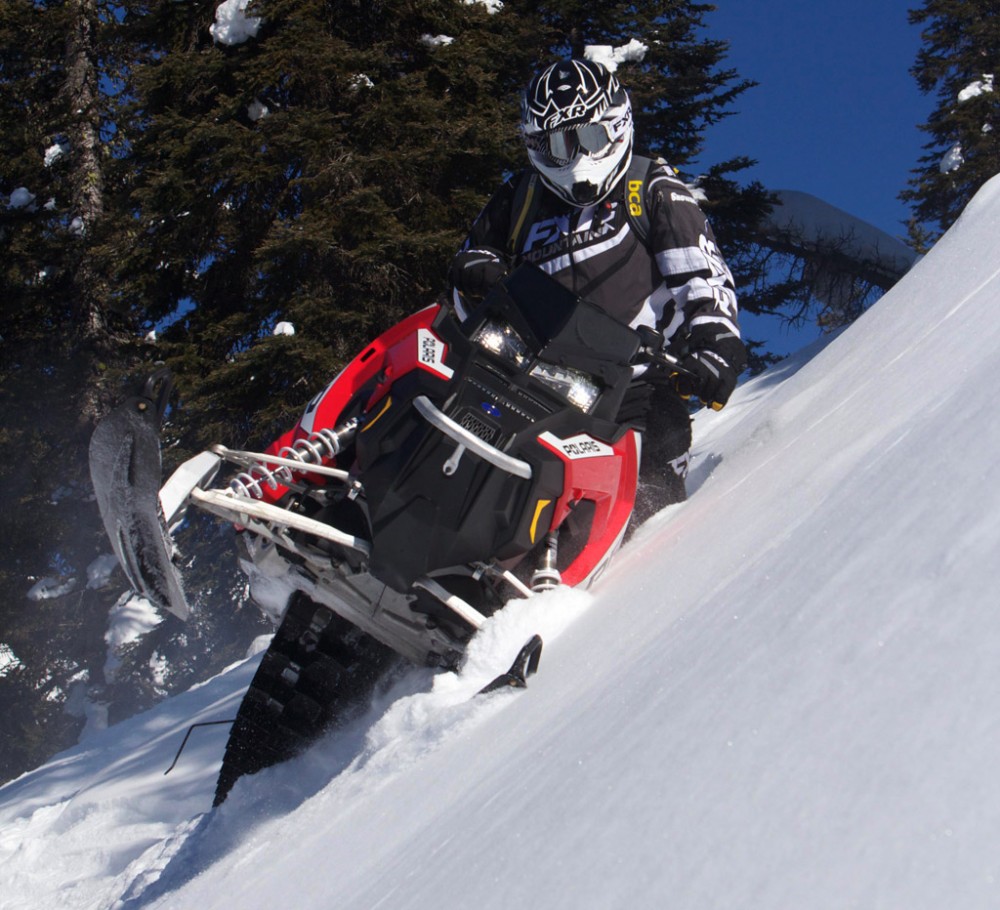 Polaris’ AXYS Pro-RMK was named our Mountain Snowmobile of the Year after our early testing.

After 26-years in the snowmobile evaluation and journalistic business, we must give equal thanks to two local businesses who have consistently given their support to the Snowmobile.com Mountain Snowmobile Shootout. First is Lincoln County Customs in Alpine. Owners Troy Johnson and Cari Johnson have given their shop for our weigh-ins, tune-ups, and dressing in-and-out of our outerwear. Second is Bott Yamaha/Ski-Doo in Idaho Falls, Idaho Owner Bob Bott, sales manager Matt Sorg, and the Bott Yamaha/Ski-Doo service mechanics have provided hotly-dialed-in Ski-Doo Summits that run oh-so-well in stock form over the years. The workers at Bott should be arrested for cheating physics the way they do.

We also give credit to Rexburg MotorSports (RMS), who received the Polaris Pro-RMK and SKS Pro and Yamaha Viper MTX for our use. Polaris, Yamaha and RMS give outstanding support to our efforts to inform honestly and as accurately as possible in an always challenging snow environment. The M8000 Limited was shipped to Cat’s mountain snowmobile R&D test facility for Todd Tupper, an Arctic Cat mountain-snowmobile R&D technician and facility program manager, to prep to withstand our abuse.

We had a weekend filled with both surprises and expectations. Along with veteran Snowmobile.com rider Kevin Allred and seasoned photographer Jake Allred, I coordinated the two-weekend drill camp with guest-test riders Greg Huntsman (Idaho Falls), Roger Raymond (Menan, Idaho), Brent Burton, (Grant, Idaho) and Mark Radford (Idaho Fall). This was Radford’s first year where the others are multi-season guest-test riders. All these riders have owned the four manufacturers’ snowmobiles and know the  brands well. Troy Johnson joined us for brief a period as a speed-run pilot. He builds custom deep-powder snowmobiles – any brand any model.

At center were three 160-something players; a Polaris AXYS Pro-RMK 163 with Series 7 three-inch paddle track, Arctic Cat M8000 Limited 162 with three-inch PowerClaw track, and Ski-Doo Summit SP 163 with T3 and PowderMax II three-inch track, which measures 16-inches wide versus the 15-inch width of the M8000 and Polaris Pro. These three were compared, weighed-and-measured against each other.

Thrown in the foray, but evaluated as single stand-alone units rather than against each other, was a Polaris AXYS SKS Pro 155 with Series 6.0 2.6-inch paddle track and a Yamaha Viper MTX LE 153 with three-inch PowerClaw track. One of these was such an overachiever extraordinaire we had to remind it to slow down and not be so aggressive. More on this later. 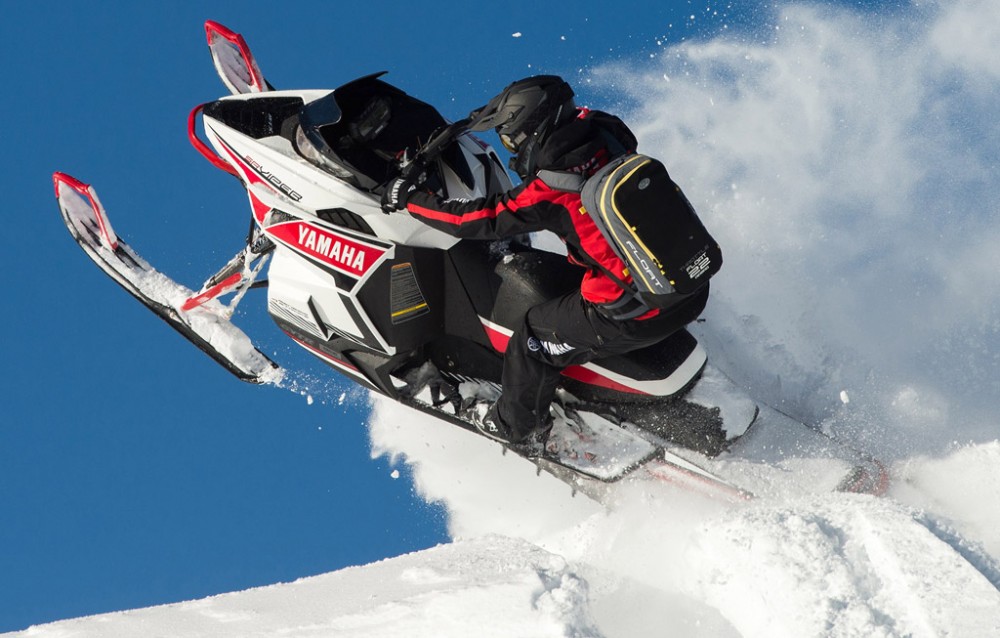 A Yamaha Viper MTX 153 LE was also part of our test fleet.

In Part II we will offer rider impressions and scores on the three 160-something rowdies. The two stand-alone snowmobiles – Yamaha MTX 153 and Polaris SKS Pro 155 – will have their own unique feature.

We will also offer long-term evaluation reports at the end of the season. It is only fair, and is our job, to report what we know after a full-season’s worth of riding.

In our tradition, when we receive our media snowmobiles, we follow a regimental manufacturer-recommended break-in period. We don’t start out with a “ride-it-like-you-stole-it” attitude, but with motor-seasoning attitude that is meticulously compliant. The Ski-Doo Summit SP was brand new when we received it and we rolled about 87 miles on the SP on its first day – trail, hillclimb and deep powder. The other 800s, Pro-RMK and M8000 Limited, had numerous powder days already logged on the record books by the time evaluation officially commenced.

On the first evaluation weekend, Kevin and I, along with multi-season guest-test rider Greg Huntsman, weighed the three test units at LCC’s shop. The weigh-in required the three mountain tumblers be dry, which they were after seven days in a warm shop. Also a Snowmobile.com requirement is the vehicles must be filled with fuel and oil and have a spare belt and tool kit, which they did.

Analysis: True to expectations, Polaris’ Pro-RMK is the lightest mountain snowmobile on the market. With the Pro’s light weight, powerful motor and stellar power-to-weight, it is the lightweight king. 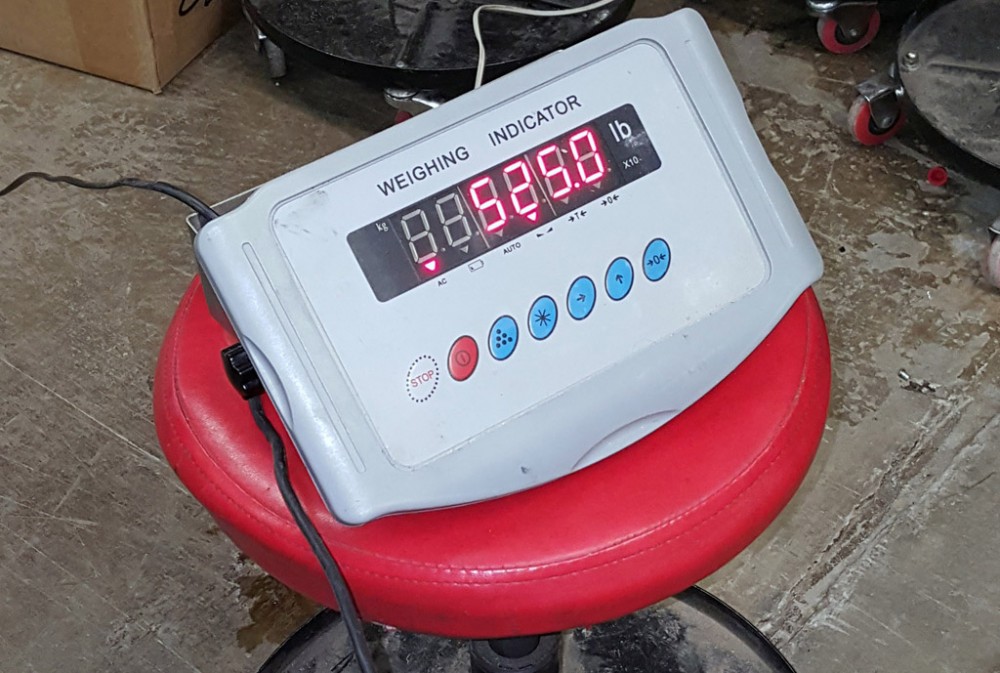 At 525 pounds fully dressed-out with all fluids, a chaincase, storage bags, spare belt and tool kit, and Series 7 three-inch paddle track, the AXYS RMK Pro shows it is a lightweight wondercraft on the snow.

However, let’s also give credit to the heaviest snowmobile, the M8000 Limited. The M8000 Limited’s phenomenal balance and much improved front suspension make it feathery light through the bars. Which one is lighter on the snow, as per rider seat-of-the-pants and in-the-arms feel? Both.

Still, kudos to Polaris as this company put the hurt on Ski-Doo and Arctic Cat in 2016 with its lightweight wonder mountain snowmobile, the AXYS Pro-RMK.

Here is an interesting scrap of information, we’ve learned as a day progresses in the backcountry, the Pro-RMK and Summit SP (and X) gain weight via snow buildup under the tunnel. The M8000 with its tunnel-less cooling system, does not thaw and flash freeze snow like the Summit and Pro. Meaning, by day’s end and as fuel is consumed, the M8000 Limited may very well weigh less than the Pro-RMK and Summit SP/X. To date we have not validated this, others have, but we note the M8000 runs the cleanest. 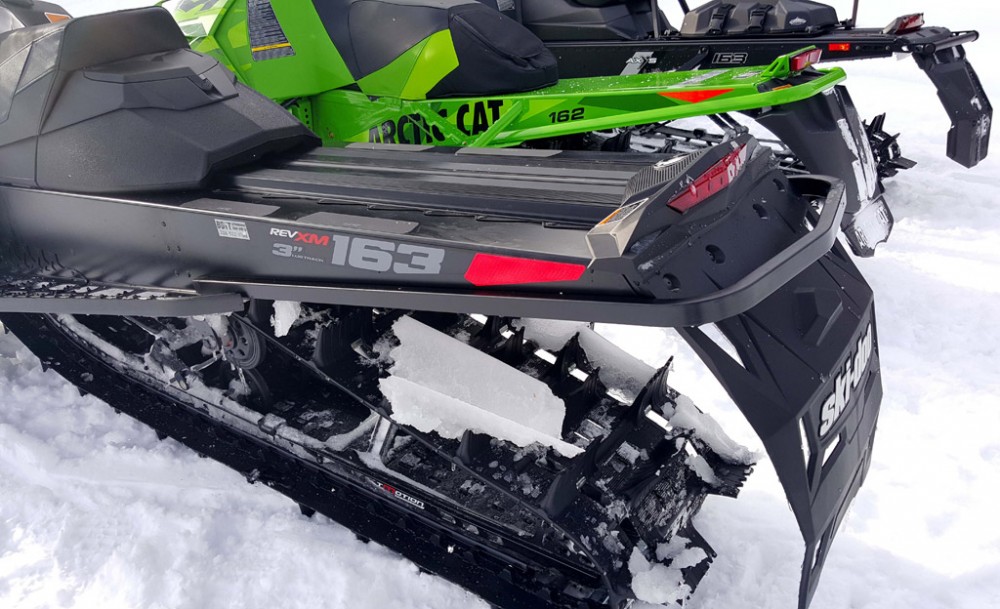 The Ski-Doo Summit SP, with its micro-channel cooling system in the tunnel, thaws and freezes snow which in turns adds weight to the mountain snowmobile as the day wears on.

What Was Your MPG

Fuel mileage for mountain snowmobiles is so subjective it is hard to give any conclusive data. Snow conditions, rider weight, track spin, speedometer accuracy, snow depth and elevation all play a part. What we give here is from weekend-one where we rode both trail and mountain, giving more time to trail than to mountain.

Analysis results: The folks at Ski-Doo claim its 800R E-Tec motor is the cleanest and the most fuel miserly of the 800s, and from this, Ski-Doo is correct. The new 800 High Output motor from Polaris drank the most fuel, with the Suzuki motor in the M8000 Limited the next. These results may not be consistent, but from our many years conducting these evaluations, one truth we have learned, the Ski-Doo Summit seems to be the fuel-friendly champ, whereas the M8000 and RMK trade year-in and year-out for second. 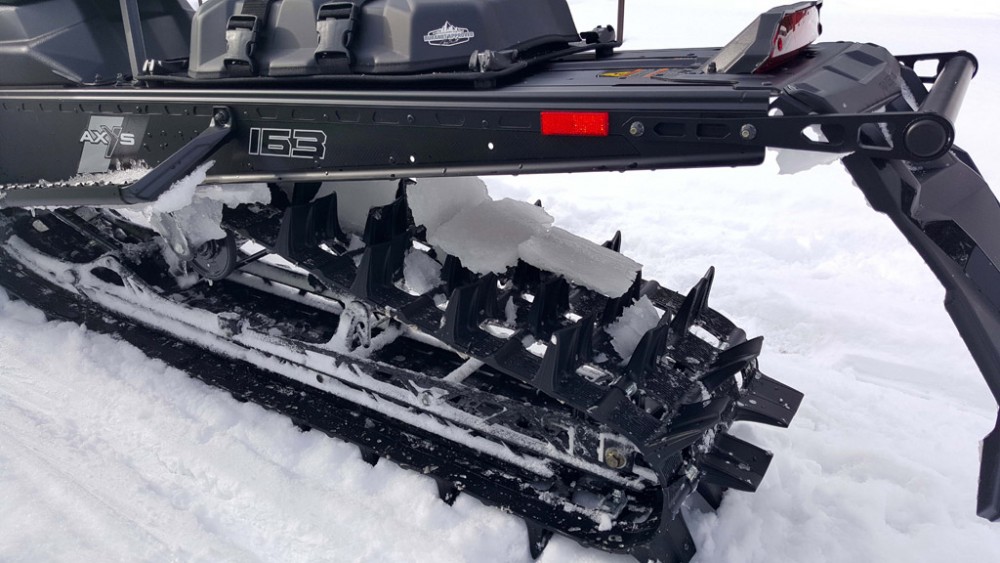 The 163-inch AXYS RMK Pro is narrow, light and both tall and dropped. It is an ultimate mountain snowmobile. Though light on the snow, there were times our test riders felt it felt heavy through the handlebars.

How Fast Are You

With the three elite mountain snowmobiles filled with fuel, we set out to time each snowmobile’s 500-foot uphill speed through our trusty Brower timing system. The goal was to set the drivers, Johnson, Raymond, Radford and Burton, across the timing trip light at a 10 mph rolling start, to ascertain which snowmobile dug deep and scampered the fastest. Each driver took three runs per sled, where two of their three runs were officially recorded – the first speed run was used as a practice rip. With a gentle uphill slope of one to two degrees, the results are as follows: 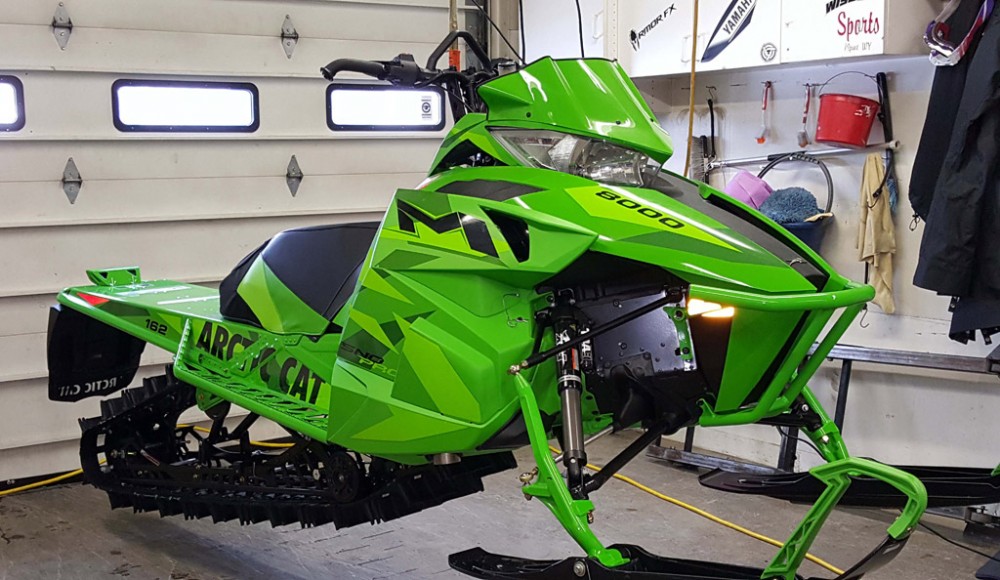 With its full-compliment of fuel, oil, coolant, spare belt and tool kit, the 162 M8000 Limited delivered a weight of 567 pounds. But the Limited, to our testers, felt the lightest on the snow due to its expert front suspension and vehicle balance.

What we did learn is the M8000 Limited – the heaviest snowmobile – with its superb three-inch deep-lug PowerClaw track, was generally the fastest 800 160-something mountain snowmobile. Arctic Cat can put the power to the snow. Imagine what the outcome would be if the M8000 Limited 162 was 20 to 30 pounds lighter?

Polaris’s AXYS Pro-RMK is the lightest mountain snowmobile. From a mostly long-day’s trail ride, the Ski-Doo Summit was the economy ruler. In brute force speed, the M8000 Limited mustered the fastest times. By our measure, from each test each mountain snowmobile scored a first for that day.

Overall from the above data, the 160-something length 800s are close, but we think you knew that.

Stay tuned for Part II, where our test riders offer their ride impressions and scores of these 800 powder turners.