Say no to spring in Mattawa-Bonfield

As much as it pains me to write this, snowmobile season is starting to wind down. Not one to sit idly by and watch the final days of the season go by; I grabbed our video producer and headed north from Toronto to seek out some of Ontario’s finest snowmobile trails.

I’d heard from a friend that the Mattawa-Bonfield area had been hit hard by snow in recent weeks, so we decided to check it out for ourselves. We also called up our friends at Redline Outdoors, who hooked us up with a couple of rental sleds. Redline Outdoors is going to be working with the Best Western North Bay to provide snowmobile rentals and tours of areas like Mattawa-Bonfield. The partnership with Best Western North Bay makes sense, because it’s a full-service hotel with a snowmobile lockup and easy access to thousands of kilometres of trails.

We decided to use the Best Western as our home base and after checking out the area (it’s located right across the street from beautiful Lake Nipissing) we hopped back in the car and headed east to see both Mattawa and Bonfield. If you’ve ever been here before, you’ll know that it’s about as snowmobile-friendly as anywhere in the world. We saw many snowmobilers ride off the trails right to the local gas stations to fill up before heading out to ride again. Once you unload your sleds here, you really don’t need to worry about driving anymore. Chances are you’ll see more snowmobiles than cars parked in front of local restaurants. Huge wood carvings, like this one of Big Joe Mufferaw, dot the streets of Mattawa.

Meeting us in Mattawa was Jeff McGirr, vice president of the Mattawa and Area Snowmobile Club and executive assistant for the Mattawa-Bonfield Economic Development Corporation. McGirr informed us that the area had a couple feet of snowfall in the week or so before we arrived, so the trails were in fantastic shape. This was March 6, and we were told by several people that the trails around Mattawa-Bonfield had a four-foot base. This should mean plenty of late-season snowmobiling for those unwilling to put their sleds away just yet. The snowmobile lockup at the Best Western North Bay can get pretty busy in peak season.

With visions of snowmobile trails dancing in our heads, we loaded up the car and drove back to the Best Western. It was getting late in the day and we were getting hungry, so we wandered over to Farina Ristorante, an Italian restaurant located on the ground floor of the hotel. This place simply blew us away. We were not expecting a place this nice, but didn’t let that stop us from gorging on Bracciole (thin strips of beef rolled with parmesan cheese and basil), chicken parmesan, and a few adult beverages. It was a relaxing way to spend a night and it gave us a chance to talk about what to expect when we hit the trails the next morning.

Not wanting to waste any daylight, we got off to an early start and made our way back to Mattawa to meet up again with McGirr and Jason McMartin, director of economic development for the Mattawa-Bonfield Economic Development Corporation. While unloading the sleds at the trailhead, the sun was already bright in the sky. Mother Nature was going to be very cooperative for our ride day. Redline Outdoors hooked us up with a couple of rental sleds for our trip.

McGirr knows the trails around this area as well as anybody and he acted as our guide. He led us to MA-150, one of the main arteries in this trail system and where we would spend the bulk of our day. MA-150 is part of the Ontario Federation of Snowmobile Clubs during the winter months, but the rest of the year it’s part of the Voyageur Multi-Use Trail System. I’ve ridden ATVs on VMUTS trails in the past and have many fond memories. I couldn’t wait to try them out on a snowmobile.

As luck would have it, MA-150 was freshly groomed the night before we rode. In fact, we were the first to lay tracks down, which is always a nice feeling. Surprisingly, we pretty much had the trail to ourselves all day. A handful of other snowmobilers waved as we crossed paths, but it was pretty much just our group.

We got to ride wide-open trails like this all day.

The trails were in such good shape and the scenery in the area so breathtaking, our video producer’s toughest task was narrowing down the areas he wanted to capture. Unfortunately, he wasn’t able to get his camera out in time to record much of the wildlife we saw. I lost count of how many deer crossed the trail or ran along in front of us, but the highlight for me was spotting a bald eagle, which was perched in a tree right below where we stopped to chat for a minute. It stretched out its wings and flew directly over our heads. What a sight! 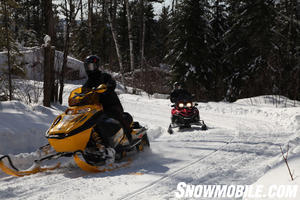 MA-150 was full of twists, turns and elevation changes.

It should be noted that the trails on MA-150 are incredibly wide in some areas. It’s not often I’ve had so much room on a snowmobile trail, even when crossing paths with snowmobilers traveling in the other direction. My hat’s off to the groomers. Also of note, this stretch of trail features several rest areas with restrooms and covered areas to relax.

Beyond all the amenities, the trails here are just plain fun. We didn’t spend much time going in a straight line. Instead, we were sweeping left and right and enjoying elevation changes all day. You simply can’t get bored riding these trails. It’s easy to get used to beautiful, tree-lined trails like these.

At one point we got off our sleds and checked out an old mica mine. If you bring flashlights you can go exploring, but we just checked out the periphery. It was a great place to find some very cool ice formations.

After our brief spelunking adventure, we hopped back on our sleds and rode towards Mattawa. Daylight hours were quickly disappearing and it was time get a bite to eat. We rode our sleds to Myrt’s, ordered up a table full of panzerottis and dug in. Being the glutton that I am, I also managed to eat a piece of coconut cream pie. The mica mine provided some unusual scenery.

Sadly, it was now time to head for home. We loaded the snowmobiles back onto the trailers, hopped into our car and returned to Toronto. However, this doesn’t mean snowmobile season is over just yet. Even as we make our way to mid-March, Ontario still has some snowmobile trails open for business. Check out the OFSC`s website to find out where to ride. 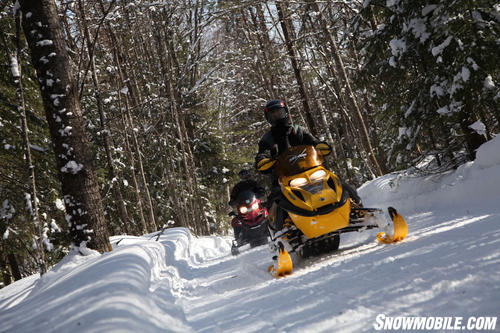 Who’d have thought that March snowmobile riding in Ontario could be this great?

Related Reading Lack of Snow Got You Down? Ontario is the Answer – Video Rainbow Country Snowmobile Adventure [Video] High Tech Sledding in Ontario