We visit Northeastern Ontario for a legendary snowmobile tour

Located in Northeastern Ontario, the Abitibi Canyon Loop Tour offers some of the most spectacular winter scenery combined with an exhilarating ride into the wilds of the James Bay lowlands. The 303km loop tour is one of Ontario‘s farthest north-reaching snowmobile trails delivering an abundance of snow and a season that stretches a full five months.

Visitors can expect a medley of the warmest northern hospitality, unoccupied boondocks and highway-like trails. This is the area where local business operators and club volunteers greet you like old time friends. Area snowmobile trails advance you into seemingly untouched ribbon-like passageways due North towards a hidden hallmark of the land. 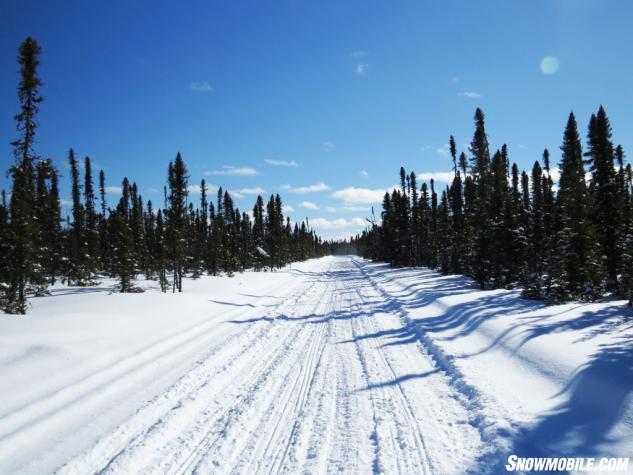 When Northeastern Ontario offered a chance to win an all-inclusive trip to snowmobile this route, riders from near and far took to social media using the hash tag #RideNeOnt, submitting geo-tagged photographs and bidding for their chance at experiencing this adventure.

The winning photo came from Candi and Adam of Toronto. Last March the pair ventured to Cochrane to tackle the tour. Unfortunately, a mechanical issue with their snowmobile stopped them from completing the tour. However, they did come home engaged. A trailside picture of Candi’s hand with an engagement ring and Adam in the background is what won them the contest, which you can see here. On March 7-9, 2014, Candi and Adam were off to conquer the tour on sleds provided by Sleddealers.ca. 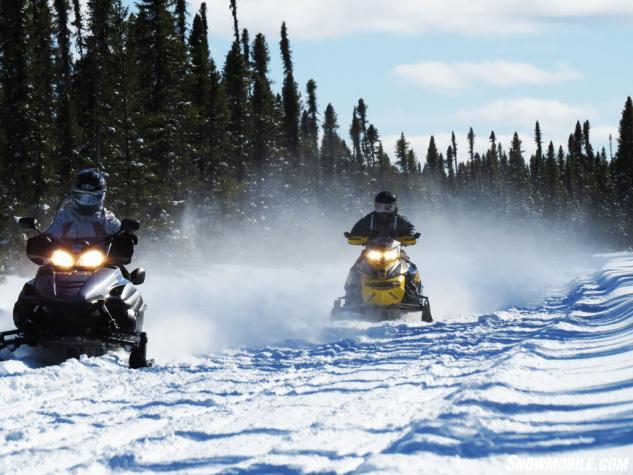 The crew arrived in Cochrane, home to the Polar Bear Riders Snowmobile Club and the Best Western Swan Castle, on Friday, March 7 in preparation for an early start to the long ride ahead. 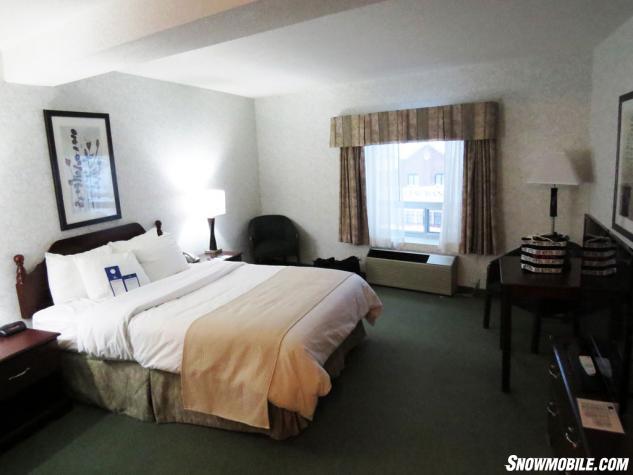 Candi and Adam were introduced to John, Richard, Virgil, Kim and me as we sat around the table enjoying scrumptious ribs at JR’s Bar-B-Q Ranch. We highlighted the route and eagerly chatted about the adventure to come as Old Man Winter tossed another round of snow from the sky. We planned to leave bright and early from the secured parking at the Best Western along the TOP A trail to Smooth Rock Falls, where we would fuel up our snowmobiles before heading north.

The morning came quickly and we were met with clear skies and freshly groomed trails. Heading north from Smooth Rock Falls along the well marked and signed A103 – Abitibi Canyon Loop Tour – we were presented with a mirage-like horizon of the straightest and flattest powder-filled hydro corridor you could ever imagine. The corridor is as wide as a football field is long and is bordered by the dense boreal black spruce forest that seems to copy and paste its self over and over. 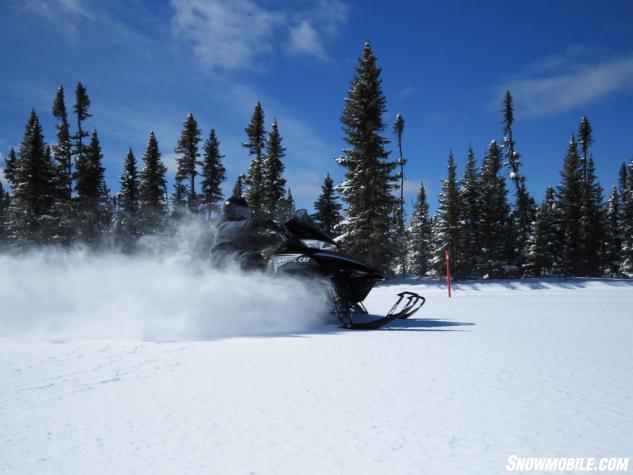 Upon arriving at the Abitibi Canyon, we were presented with an epic view of the massive hydro generating station that was built in the 1930’s on the Abitibi River. It’s an absolute wonder to see something of this magnitude so far north. The geological formation of the Abitibi River Canyon is simply remarkable in comparison to the surrounding relatively flat landscape. 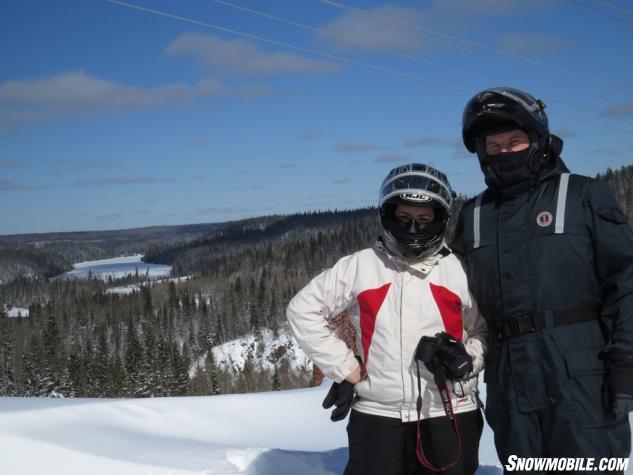 Adam and I took the opportunity to venture into what is known as the “Canyon” by the off-trail boondocking adventure-seeking riders and were greeted by a large group looking up towards hill #1, anticipating and calculating if the climb was possible. We had a competitive advantage as I had been here before and knew the line to take. A quick decision and up Adam and I went, highmarking to the top without even a flinch. 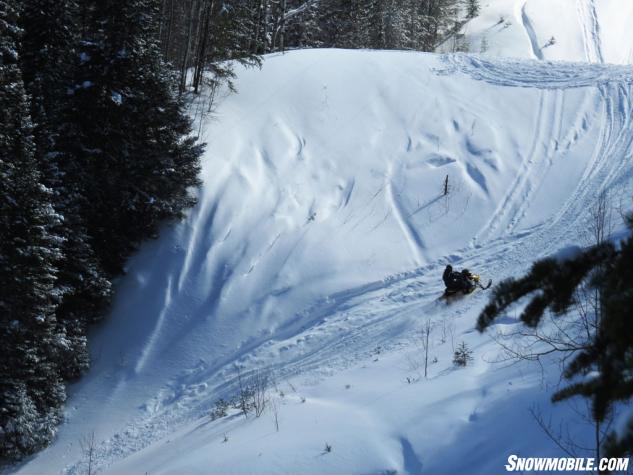 After the adrenalin-filled climb we ventured east across the gargantuan dam to get some fuel and warm up at the Extreme Tours base camp, which is located about 1km east of the crossing. We were welcomed with hot coffee, a warm woodstove and fresh vegetable soup, which is marvelous considering the remote location.

The March afternoon sun was brilliant against the blue sky and as we set out on the A103 heading south we were treated to an impressive scene of sheer northern beauty. We wound our way through the forest now on the east side of the Abitibi River. This meandering trail formed the painting-like landscape that snowmobilers dream about.

Traveling back to Cochrane as the warm sun set on our shoulders, we yearned for the hot meal ahead at The Ice Hut Bar and Grill we had heard so many great things about. Located a short walk from the Best Western, the restaurant offered up delicious steaks, burgers and even boots filled with Steam Whistle beer. Could life get any better? 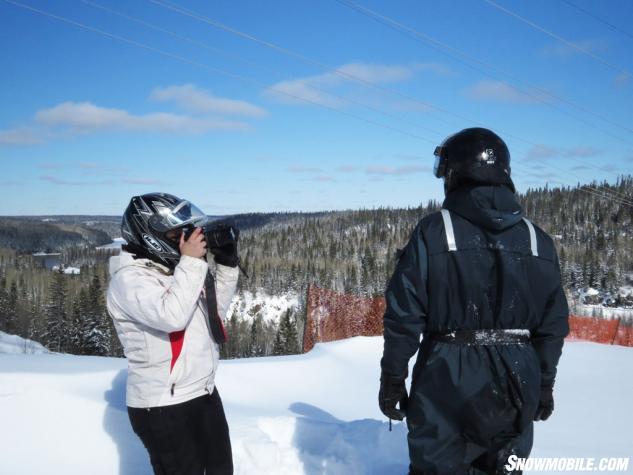 Sunday morning brought the group the opportunity to explore some the area’s local trails before heading home. The trails located south of Cochrane (L103) in the Greenwater Provincial Park (L105) are absolutely stunning and if you look closely this area is home to an abundance of wildlife.

After a late lunch at Terry’s Steaks Burgers and More, located on Highway 11 South, and a tired but satisfied farewell, we convoyed home through the snowstorm that was rolling in. It seemed like the Abitibi Canyon was calling us back. Even though we were already well into March, winter was still very much in full force in this territory and by all accounts from the friendly locals, it didn’t look like it was going anywhere anytime soon.

Candi and Adam won this all-inclusive tour through a social media contest. However, I have a feeling that they will be back again with snowmobiling friends to enjoy the experience again. It really is that legendary!