Per unit prices up, sled sales down

If you look at worldwide snowmobile sales for 2008, the sled industry sold a grand total of 163,753 units. By comparison in recent history, the 2006 worldwide sales total was just under 164,860 units. That means there were 1,107 more units sold in 2006 than last season. Of course with retail prices higher by just over US$1,000, the end result actually reflects more sales revenue in 2008 on less units sold than in 2006.

No one really knows what will happen to powersport sales in the months — years? — to come, but current indications are that snowmobile manufacturers are bracing for continued tough times as at least one round of workforce reductions have already been taken at most sled makers. Of the more than 2,000 licensed snowmobile dealers in the U.S., we’ve already heard of dealer fallout occurring around the snowbelt. This is not strictly a snowmobile dealer problem as boat dealers, motorcycle dealers and, of course, General Motors and Chrysler dealerships have been hit in this severe economic down turn. 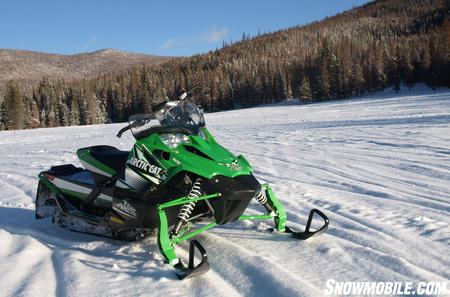 Arctic Cat is hoping that aggressive pricing will bring sales for the Sno Pro 500.

As the quarterly and annual reports at each snowmobile manufacturing entity come in, you can bet there will be more — not less — belt tightening. As we’ve already seen at the annual snowmobile showcase in Colorado this past March, some companies have cut back on new model introductions as they gauge effects of the current economy. Polaris poured its efforts into its new Rush model and revamped or repositioned other offerings like its LX series. These sleds reflect the heart of what traditional snowmobilers buy. There have been similar “make do” changes at the other companies as well. 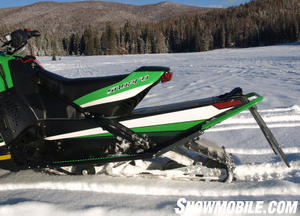 Granted, we don’t run a snowmobile company and if we did, we’d probably run it right into a snow bank, but we can’t help but wonder if this is less the time to retreat and more the time to attack the market with some innovative thinking that actually takes advantage of the economy and is designed to re-invent the core enthusiasm.

An old friend once told me that when people ask for what they always had, then that’s what they always get. We understand the purpose of marketing surveys and focus groups, but we find them to be gutless for advancing innovation. Do you really think Toyota planned its hybrid cars as big sellers? Until gasoline hit US$4 per gallon, few outside the granola-crunching anti-automobile crowd were interested. But high-priced gas with the look that it would continue to spiral upwards gave Toyota’s Prius broader appeal. Let’s not forget that the Prius is now in its third iteration, so Toyota had the vehicle ready if the market came to it. Where is the similar thinking in the powersport business? Please, don’t say motor scooters, at least not for Minnesota’s six months of winter climate!

As a brave new marketing genius at a snowmobile company, we’d be planning ahead. Let’s figure that we’ve done nothing to date but continue the status quo of bigger, faster, more costly. How’s that working for us?

Since sled sales dipped to low levels, we can blame the economy, a lack of snow, high-priced gasoline and maintain the belief that if we create a better terrain masher we’ll gain market share from Brand X. Or, we can be bold and recognize that since all four major sled makers are seeing declining sales under the existing marketing plan, maybe it’s time to toss aside the current plan and create a new one. Ski-Doo’s REV models create a perception of a short sled, but note the ample track length behind the rider.

As a publishing maven in the mid-1980s, we faced similar economic times in the sled business. The snowmobile business didn’t need another snowmobile publication, but we gave them one anyway. At the time virtually all snowmobile magazines were “giveaways.” A publisher would buy or be given sled manufacturers customer lists and mail free copies of their publication to them. Because these were magazines that catered to the sled makers and not the snowmobile enthusiasts, the editorial was predictably safe and non-controversial, lest it result in a hacked off snowmobile manufacturer pulling advertising dollars to get the publication back in line. Familiar with that “free” concept, we started an abashedly amateurish looking tabloid snowmobile publication with attitude. We decided, that since we would invariably tick off at least one sled maker every issue or two, we’d focus on building up advertising revenue from other sources, harder to mine but less flighty. We sought out the big and small aftermarket folks, established a dealer and resort sales outlet, and worked hard to create a desire for our product via print and Internet so we could build up a gang of satisfied paid subscribers. We weren’t free. So we tried to reward our subscribers with editorial that fit them, had opinions — with which they frequently disagreed — and an outlook that was not safe. We did dyno-tests, shootouts, head-to-head comparisons. And we became the Number One paid subscription snowmobile magazine in the process. Of course, we did sell it at the height of its success — and to stay a part of the snowmobile world, we have ended up here sharing attitude with you.

We mention the past as a prelude to what we feel some — or all — of the sled makers could do for their futures.  We think every sled builder understands that current pricing is realistic for the product they sell. We grant them that. But maybe the product needs to change. At more than US$9,000 per sled, pricing has to be a serious consideration. After all, you can buy a 2009 Nissan Versa for under US$10,000! The car you can drive all year around. The sled? Maybe 12 weekends a season, if lucky!

What Do Sledders Want?

Snowmobilers say they want performance. In an April blog, we pointed out the power to weight ratio of a fictional sled that would provide current day sled performance in a design that was lighter and less powerful than a modern version. That can be one way. If you read the current review of the Polaris Trail Touring, you’ll see that the price is around US$3,000 less than the average price of all sleds sold last season. That’s another way. But, face it, not all that many Polaris Trail Touring models will be sold this coming season. 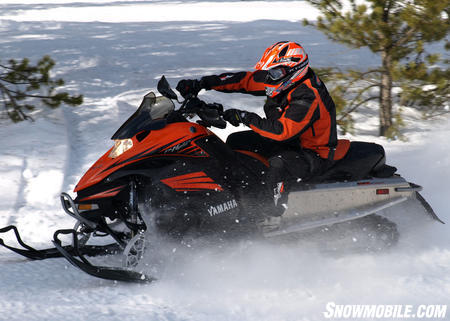 Also a rider-forward based model, Yamaha’s Nytro looks almost stout compared to the Ski-Doo and Cat.

What you want is a sled style that has appeal, like Ski-Doo’s REV did. You want to create a new excitement that replicates the original vision of snowmobiling. While the powder sled market is currently a reliable source of revenue, you want to create a sled for the flatland masses, because that’s where the riders are.

If you look at most of the ride-forward models, you see that the sled appears nearly a yard shorter than it is as the track flows almost imperceptibly beyond the seat. There is an onboard sense of being on a substantially smaller unit. We figure you can deduct three feet of snowmobile. That calls for clever engineering, but we fully expect, given the right direction, today’s engineers would embrace the challenge. Shortening the sled deducts weight. A lighter sled needs less power, should consume less fuel, and still implant a high fun factor — for less money?

As we look at the sales figures, we figure that sales are going in a direction that is not good for any of us. Without some out of the quarterly reports type of thinking, the situation will stay status quo or worsen. Take a look at sled sales figures for the past and see what you think. It’s going to take some creativity to turn things around. Unlike in past declines, this one came with recent good snow seasons, so the old mantra of “It’ll be alright once it snows” probably isn’t in play this time. That’s my rant for now and I’m sticking with it. If you want a marketing genius with serious attitude and no stomach for boring staff meetings (been there, done that!), there are still a few hours a month available in my schedule. Remember that snow bank, though! But do peek at the stats of the past and look to a better future — for us all.