Some basic mountain-speak for your mountain riding knowledge

Before the mountain rider became a viable consumer to the “Big Four” of Polaris, Yamaha, Ski-Doo, and Arctic Cat, they only gave about 25 percent thought to this 25% of the overall snowmobile market share-buyer — the mountain sled consumer. Mountain snowmobiles starting from the early 1990s were nothing more than stretched-out trail sleds — 136-inch rails, 1.25-inch lugged tracks and 37-inch ski-stance. That’s it. That’s what was offered. Of course, in those days the deep powder market was actually a smaller percentage than it is today. But when the snow drought hit the primary and traditional snowmobiling areas of the Midwest and East, the West still got snow and powder sledders still bought, making them significantly more important in a down sled market. 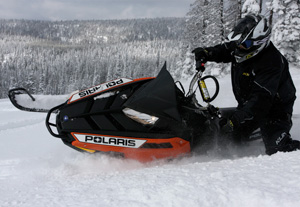 Polaris has made its RMK line product-specific for mountain riding, but Polaris did not leave out trail savvy. The RMK is light, agile and like its competitors, dual purpose in a single-purpose world. The RMK uses a vertical steering post, which Polaris states mountain riders demand for superb body positioning when sidehilling.

Mountain riders, as they became skilled and smarter, became much more vocal. And through a unified voice, their “wants” took on more import and became crucial to the manufacturers’ sales, mission and reputation.

As demanded then and demanded now, mountain snowmobiles must be featherweight light, linebacker strong and fullback agile. Technology in a mountain sled, in my opinion, trumps the technology on a fast trail snowmobile. Lightweight and very robust snowmobiles, with smart terrain adapting suspensions are a strongly held “must” for mountain riders.

As the market grew and demands became reality, the mountain rider had more choices such as Polaris’ RMKs and RMK Assaults, Ski-Doo’s Summits and Freerides, Yamaha’s Nytro MTXs and Arctic Cat’s Ms and HCRs. Western powder riders lobbied hard to get them and love ‘em, as sales statistics reveal.

While we could write many pages about a mountain snowmobile’s terrain-specific components, the most crucial are suspensions – rear and front – and steering. In complement to these, tracks and skis are crucial ingredients and they alone can take separate technical articles. 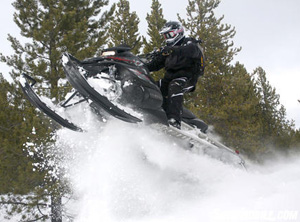 Though Yamaha’s FX Nytro MTX, with its four stroke motor is heavy, yet its FXG2 front suspension and Pro Mountain Air rear suspension keep the Nytro MTX feather light on the mountain and trail. Like the Summit, it to uses a horizontal (laydown) steering post configuration. This mountain sled hugs corners like no other.

Mountain-specific suspensions differ much from their flatland counterparts in that mountain suspensions must keep aloft (float) a 500-pound machine and its 200-pound rider. Add to this 700 pounds additional weight from fuel and the gear the rider packs. If these are not enough, add in the snow that is packed inside the snowmobile’s rear suspension.

Flatland trail burners carry big guys for long distances and require rear suspensions that must make the ride pleasant. But this is not enough; the rider must have control and a level of confidence.

For example, Polaris’ 800 Switchback Pro-R is a snowmobile that tweaks my “Wow” button. Down the trail and through the awful chatters, it is tied down to ol’ mother Earth. Its 136-inch Rush Pro R front and rear suspension with Walker Evans shocks and the 1.35-inch Cobra track all blend together to cook up a superb trail sled. However, one afternoon while at Photo Shoot 2012, we had this sled and a handful of mountain sleds. Near Two Top, just South and West of West Yellowstone, off we went, taking a left turn off the trail. Everything that made the 800 Switchback Pro-R wicked smart on the trail, worked against it in the knee-deep powder. Does this mean it is a bad snowmobile? Good golly Molly no. Like an RMK, M, Summit or Nytro, it is terrain specific. However, and lets underline however, these aforementioned mountain sleds when taken off the mountain and placed on the trail can sprint and dart quite well down the trail, giving up very little to their shorter track cousins. The mountain sleds you and I can purchase today are, in fact, quite dual purpose. Again, the mountain rider demanded it and the OEMs delivered. 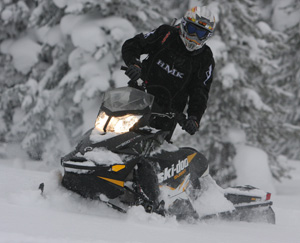 The Ski-Doo Summit uses a horizontal steering post that allows the driver to push down and pull up on the handlebars, many drivers prefer this style and it works very well with the S-36 package. The front and rear suspensions on the Summit line is proactive and very-much dual purpose — efficient for deep snow and trail.

Mountain-specific suspensions must squash into the mountain to hold a sidehill, must be able to control a hard turn on a rapid ascent to a descent, whip through trees and gullies, and handle trail moguls and chicanes like a snow-crosser. These are challenges to a suspension designer.

Polaris’ Chris Wolf wrote to Snowmobile.com about this and other matters stating, “Neither type of suspension (falling rate or rising rate) is necessarily better than the others in all conditions. The key is designing a lightweight suspension with good bump absorption capability, along with weight transfer characteristics, that give the sled the right balance in deep snow.”

A little trick some OEMs did to make their long track rear suspensions act like a short track, was tipping up the rear rails about one-eighth of an inch; this was common on a mountain snowmobile that spun a track over 160-inches in length. Back to Wolf, “The primary benefit of tipped rails is better cornering on hardpack trails. Straight rails provide better traction in many mountain riding conditions, and are therefore used on most deep snow models.”

Tipped up rails, though giving the rider a benefit on hardpacked trails as Wolf said, delivered an unwanted nuisance when ascending a steep slope — tail walking. A mountain snowmobile, when ascending a slope, is more efficient and under control when most of its rear suspension and track are fully engaged on the snow. If a snowmobile is only placing the back half or less of its rear skid and track on the snow, the snowmobile is over transferring — it will trench and in some cases will stand up like a fence post and tip over. Tipped up rails contribute to over transfer.

Let’s understand weight transfer. A mountain snowmobile, for that matter, any snowmobile, will, when throttle is applied, transfer — shift — its power load and weight from front to back. Hefty transfer causes the snowmobile to “wheelie.” Wheelies are fun, but are pre-cursors to getting stuck and to a dangerous condition, the potential of a mountain snowmobile pulling its nose over its back, as written above.

Through flat rails, and proper limiter strap adjustment, a mountain snowmobile will use its full tread to keep momentum flatly moving forward. Also, keeping the skis on the snow is crucial for a quick whip to the right or left.

Like a fast trail sled, a mountain snowmobile needs an active front suspension, but it must also be soft, meaning, it must be easy to collapse in the right snow and terrain conditions. Yet, the front suspension must be stout enough to muster through the big whoops and the drops. Again, it must collapse, when a driver rolls the snowmobile from center right or center left to stuff it into a hillside. A front suspension that fights this will want to seek ground level, run flat and will dive off the hill. That can be dangerous.

An active front suspension includes understanding spring rates and pre-load. Often, professional backcountry scouts and teachers use dual rate springs over the shocks to give a controlled ride through the chatters and a quick collapse when stuffing into a hillside. Again, rider weight, need and terrain determine spring load rate. If you want a huge education on spring rates, contact Renton Coil Spring Co. and hold on, you will be blown away with their smarts.

Swaybars are nice to control ski push and tip when approaching a corner (to keep a snowmobile flat), but resist a driver wanting to roll off center when traversing across a mountainside. I have mixed opinions on this. Narrow stance snowmobiles are not much affected by sway bars, where as mountain snowmobiles with a wide stance and a swaybar can be dicey on a mountain. Ski-Doo, knowing riders want it both ways, offer a swaybar quick disconnect. Use it or lose it, it is your preference. Also, soft front suspension springs can cancel some of the woes a swaybar may cause when mountain smacking. 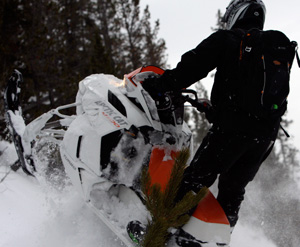 With its successful M8 line and now with the M8 in Cat’s new ProClimb chassis, Cat worked hard to offer a vertical steering post for its M8 Sno Pro and HCR. The standard M8, as well as the four-stroke M1100 have horizontal posts. Suspensions on the M8 are vastly improved from yesteryear. Cat’s front suspension is a bump soaker and deep powder player as well.

A last discussion point. Much has been written about vertical and horizontal steering posts. Horizontal posts are over the motor steering posts and have a rotation similar to a car or freeway cruiser motorbike. Vertical posts are behind and under the motor, or to the motor’s right side. These posts allow the bars to swing flat, like on a dirt bike: YZF, CRF or KTM. What you want is your preference, what style adds to your confidence and ability. How a handlebar swings affects how a front suspension works in deep powder and on a hillside. And why is that? Body position when standing. Wolf states that, “Vertical posts improve ergonomics for stand-up riding, which is the primary mode for mountain riders.” Yet, Summit riders feel out of sort when reefing on a vertical post snowmobile. Preference.

Horizontal posts – flat rotating – can be mated to a 38- to 41-inch ski stance. Horizontal steering posts are best suited to a mountain snowmobile with a narrow stance 37- to 38-inches and soft springs. But, this is not a proven mechanical engineering fact. Vertical versus horizontal (also known as laydown) is an ongoing debate. Two OEMs use vertical posts, Polaris on its RMK line, Arctic Cat on the M8 Sno Pro and HCR only. On the other hand, Yamaha on its Nytro MTX and Ski-Doo on its Summit and Freeride line, use horizontal.

There is much to digest here. Hopefully, this article has given some clarity. But know, mountain riders have split personalities and want fast trail capabilities and deep snow abilities. For the OEMs to serve our wants has been no small feat.