The latest engineering fad in the snowmobile industry is the rising rate suspension, but what is it and why should we care?

Currently there are only two suspensions on the market that offer a rising rate, the Pro-Ride found in the Polaris Rush and 2012 Switchback and Ski-Doo’s rMotion found in the 2012 MX Zx-RS and select MX Zx models. The suspensions accomplish a rising rate with two vastly different approaches, but with the same basic principle. And, surprisingly, the skids have more in common than one might think.

It’s About The Ride 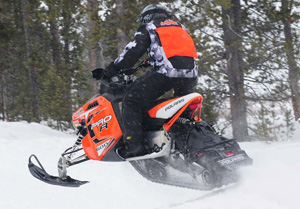 With a non-rising rate suspension a soft spring rate also means a plush ride, but it wouldn’t be able to handle big bumps. Because, as it moves through its travel, it won’t get harder, it will stay the same or get even softer. This is why most performance sleds offer a stiff ride. They’ve sacrificed a plush ride for the ability to handle big bumps.

One of the problems engineers encounter when developing rear suspensions is packaging. There is only so much room inside the tunnel and the ability to put the proper linkages in and build the proper architecture to develop a rising rate skid is much more difficult because as the suspension is collapsing the amount of room you have is decreasing. With the Rush, Polaris mounted the shock outside the tunnel, which freed up engineers to build a progressive rate linkage system to activate it. Polaris says the Pro-Ride suspension offers greater ability to handle load, it controls pitch well and helps control “wheelie-ing.” 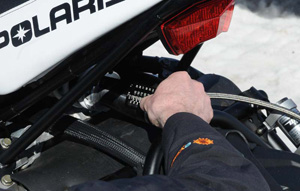 Polaris provides a gauge so riders can accurately set up the Pro-Ride for their weight.

The Pro-Ride skid isn’t coupled; something Polaris says isn’t necessary with a rising rate skid. Coupling basically connects the front and rear arms of the suspension. As the rear arm is compressed the suspension scissor will eventually hit the coupling block and at that point the front arm begins to compress. In effect, with coupling, the suspension is “stealing” spring rate from the front arm. The Pro-Ride skid does have a certain amount of coupling where if the front arm is compressed the rear arm will compress as well, but there is no hard coupling on it. Polaris says the Pro-Ride’s full-progressive load and motion ratio eliminates the need for the rear shock/spring combo to borrow spring rate.

As Polaris engineers further developed the skid, the front arm on the Pro-Ride also had to be re-thought and the 2012 version is longer. It measures a half-inch longer than the one Polaris uses on its IQ racer, which was previously the longest arm Polaris used. It’s also mounted a half-inch higher on the rail (vs. 2011). It is the longest front suspension arm Polaris has ever used. The long front arm and flat mounting layout help the Rush corner flatter. The front arm is not progressive rate, but uses a dual-rate 120/310 spring that acts progressive.

Ski-Doo’s rMotion is the latest variation on its “SC” skid and goes a big step beyond its predecessor, the SC-5. It looks like a conventional skid but relies on a cleverly designed shock linkage system to provide a rising rate. On a conventional skid the rear shock and spring are mounted such that they basically stroke through the suspension travel together and for this reason most offer a linear or slightly falling rate. 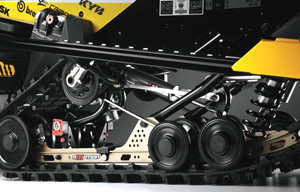 Ski-Doo did what many said couldn’t be done with the rMotion; they designed a rising rate suspension that fit completely within the tunnel.

There are two mounting points for the rear shock, one for “sport” and one for “high performance.” The different mounts basically change the speed at which the shock strokes through its travel with the “high performance” setting stroking the shock faster. The rMotion uses very little shock damping at the beginning of its travel so you’re basically riding on the springs, which provides a plush ride. As the suspension moves through its travel, the spring rate stays the same but the shock moves faster and provides progressively more resistance, thus a progressive rate.

The rMotion is coupled and has easily adjustable coupler blocks. As with any “conventional” skid, these coupler blocks can be used to tune the suspension mainly for more or less ski pressure by controlling transfer. However, in the first position they offer almost no assist so the rider can choose to ride with virtually no coupling.

The front arm on the rMotion is longer than on the standard SC-5 (4.5-inches longer to be exact), which reduces front-to-rear transfer and also allows for a longer center shock and more front arm travel. The longer arm has a major effect on weight transfer and controlling ski lift, which is basically what allows the rider to use minimal coupling if desired. Ski-Doo says they don’t necessarily need coupling on the skid but it’s on there in case riders want to use it. The center shock uses a straight rate spring and the front arm is a falling rate. Ski-Doo says a rising rate front arm presents many challenges for cornering, which leads us to believe they’ve experimented with one and perhaps have even tested a completely progressive rate rear suspension.

The Same, But Different 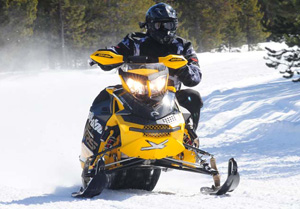 Both the Pro-Ride and the rMotion are rising rate suspensions, but they each achieve their rising rate in a different way. The Pro-Ride uses a spring/shock combo that gets progressively stiffer as it is compressed. Ski-Doo uses torsion springs and a shock that travel independently giving a straight spring rate but progressive damping. The skids offer huge travel numbers – the Pro-Ride has 14-inches and the rMotion has 15.5-inches. They do have some similarities though as both feature a unique, long front suspension arm that is mounted relatively flat, which gives both suspensions more front arm travel and more control over weight transfer. Polaris uses a progressive rate spring on the front arm and Ski-Doo uses a straight rate spring. Neither front arm is rising rate. The Pro-Ride isn’t coupled; the rMotion is coupled but can be set so there is almost no coupling.

Progressive suspension is a huge breakthrough in the world of snowmobiling and it is important that consumers understand the benefits of the design. With the examples Ski-Doo and Polaris have set we can only expect to see manufacturers come to market with ever more innovative designs.