Seeing the Light on Lite

What weight and rotating mass means for steep-n-deep riding

When riding with some of the West’s premier hot shops last winter, we spent some time on Kirk Zack’s merciless mountain buster, his Boondocker Pump Gas Turbo Arctic Cat M8. Zack is a mountain man’s mountain man. Not only does he own, promote and sell HMK outerwear for winter riding, he is a rider dude himself. Zack is not content with stock. He believes in two fundamental mountain riding commandments: less weight and more horsepower, which amps up the horsepower-to-weight ratio – the wider the spread, the better the ride.

In the West, weight is king. Not that more weight equals a harder hit in a bar room brawl, but the fewer pounds each horsepower has to carry, the stronger the sled. Most snowmobiles respond really well to lightweight components — such as exchanging steel for chrome-ally and titanium or even carbon fiber. Snowmobiles don’t come stock with a lot of these components because the cost of these snowmobiles would be out of reach for the average consumer.

Let’s talk thin air for a moment. Typically, and speaking in generalities, for each thousand foot gain in elevation, horsepower drops by three-percent. Given that, at 6,000 feet a 150 horsepower motor will lose 18-percent of its hp (6 x .03 = 0.18). So, this 150 hp, with 18-percent less horses (27 less) will slap a mountain face with 123 ponies. Add to that, an approximate 40 percent hp loss through the transmission — mostly through track rotation — this now 123 HP motor (123 X .40) is delivering 73.8 hp at the rear axle. The approximate 40-percent hp loss is charged to rotating mass, as well as binding, slippage, redirecting the twisting forces and resistance.

Cat’s mountain sleds, with its direct drive, lose less horsepower because the twisting forces (the horsepower and torque coming from crankshaft) are not redirected to a crossover jackshaft, to gears in the chain case and down to the track drivers. Lightweight snowmobiles become easier to maneuver, steer, and sidehill. The power to weight ratio improves, also improving the overall performance of the machines. This Outlaw Motorsport Nytro is a great example of combining light weight with high horsepower.

The heart of a snowmobile is its engine. An engine, be it two- or four-stroke, with oxygen’s assistance, burns gasoline (both being subject to compression in a ratio-mixture) to move a sled across the snow. The engine’s power is its output. Torque and horsepower are numbers derived from calculations that characterize the engine’s output.

We often confuse what torque and horsepower are, and how they relate. Let’s take a look at the basics.

Second, velocity is speed — it describes how far something moves in a given amount of time, such as miles per hour.

Third, every object has mass. To move an object (such as a sled) it must be subject to force (acceleration) to gain velocity. Let’s simplify this by imagining a 185-pound man trying to push a ton of bricks (2,000-pounds) resting on a 10-foot long, all-metal flatbed trailer. How easy will that be? Now, let’s take this same 185-pound man and ask him to push his one year-old daughter as she sits in a baby stroller. How easy will that be? The effort it takes to move mass is fourth, force.

Outlaw Motorsports of Enterprise Oregon has a well-established reputation of building lightweight snowmobiles. With great aftermarket mods like an EZ-RYDE suspension, a Van Amburg tunnel, and a Mountain Performance supercharger this Yamaha Nytro becomes a mountain-mashing monster.

In turn, when we push harder on an object, acceleration too increases. Yet, when an object moves at a constant speed, it has no acceleration and hence no force is applied. When we, or a snowmobile, exert force over a given distance, the sled, or we perform work. Furthermore, power is how fast we work, or in other words, how fast we deliver energy.

Fifth, many snowmobile components rotate, like the track or its engine’s crankshaft. In these instances, distance is not measured in feet or miles, but in revolutions. Thus, speed becomes revolutions over time, instead of distance over time; we all know this as revolutions per minute or RPM; common to the crankshaft.

Sixth, is torque, which is rotational energy or force. Instead of force, we have torque — a “twisting” force, so to speak. Like force, torque must be applied to get something to spin faster or slower. Torque is measured by the amount of force applied at a given distance. Torque is measured in foot-pounds.

If a one-pound weight is bolted to a floor and someone tries to lift it with equal or greater pounds of force, that person will have applied force and exerted energy, even though no work was done. Now, remove the bolt and apply a force sufficient to lift the weight one foot, then one foot-pound of work was performed. If the act of lifting the weight takes a minute to complete, then that work is accomplished at the rate of one foot-pound per-minute. However, if it takes one second to accomplish the task, then work will be done at the rate of 60-foot-pounds per-minute, and so on. 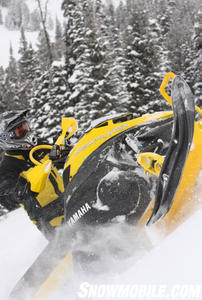 It was easy to build confidence and push your limits on this lightweight supercharged Nytro.

James Watt, a British inventor who helped improve the steam engine, made an observation. He noted that an average horse could lift a 550-pound weight one-foot in one-second, thereby performing work at the rate of 550 foot-pounds per-second, or 33,000 foot-pounds per-minute (60-seconds times 550). Watt declared that 33,000 foot-pounds per minute of work was equivalent to the power of one horse, or, one horsepower.

For this discussion, we measure units-of-force from rotating objects, like a snowmobile engine crankshaft, as a twisting force in foot-pounds of torque. A foot-pound of torque is the twisting force necessary to support a one pound weight on a weightless horizontal bar one foot from the pivot point.

It’s important to understand no one measures horsepower from a running engine. What is measured on a dynamometer is torque, expressed in foot-pounds. Horsepower is calculated by converting the torque’s twisting force into horsepower units.

Visualize that one-pound weight mentioned earlier as being one foot away from the pivot point on a weightless bar. If we rotate that weight for one full revolution against its own one-pound weight of resistance, we have moved it a total of 6.2832 feet (that’s Pi times a two foot circle) and, incidentally, we have done 6.2832 ft.-lbs. of work.

In the end, both help you go. Torque gives you the acceleration you crave, whereas horsepower produces top-end speed.

With all this set aside, Zack, like most of us, is not a mechanical engineer, but like most of us, is a speed freak. The fun factor moves up the scale by a power of 10 when a sled, a featherweight sled, heavy on horsepower, tears up a mountain’s backside.

With a few lightweight components and the addition of a turbo this already light M8 becomes a rocket good enough for Kirk Zack of HMK to claim it as his own.

For that increased power-to-weight, a BoonDockers Pump Gas Turbo (PGT) kit was added to the twin 800 with a BoonDockers’ Clutch Kit and Control Box; the clutch kit assured the horsepower was captured and efficiently delivered to the track and the control delivered the right amount of fuel at varying throttle inputs and elevations (the greater the elevation, the thinner the air). The weight saved by removing the factory canister is an almost even trade for adding a Boondocker RTR turbo that kicks out an impressive 200 hp on just pump gas.

As the name implies, this Boondocker product, PGT, is called just that because of its lower boost rating and use of the Boondocker EFI control box, allows the motor to run on pump gas; this means, 91-octane fuel. The PGT turbo kit allows the snowmobile’s motor to run 91-octane pump fuel from sea level up to 10,000+ elevation while delivering safe and reliable 200+ H.P.

Lastly, a TOTS Custom BOSS seat shaved about 11 pounds from the chassis. There are other components a snowmobiler can add to a snowmobile to reduce rotating mass and weight, one is a lightweight brake rotor (also known as a Wave brake rotor) or a Crazy Mountain Xtreme belt drive. Also, some riders will punch out (drill holes) in their snowmobile’s track, if not done so by the OEM.

In an earlier article, I wrote about lightweight Renton Coil Springs used on a snowmobile’s front and rear suspension; these too reduce weight.

Some money players will add a chromoly-frame and mesh-wrapped hood to their ride; expensive yes, but money is all it takes.