The 2018 Polaris SKS 146 is a crossover sled with heavy deep powder leanings. It’s a sled that handles great and its smaller track frees up quite a bit of power.

Editor’s note: The pictures taken of the 2018 Polairs SKS 146, and location for this shootout, was the Bridger-Teton National Forest under a Commercial Still Photography Special Use Permit; Vertical Scope, Inc., GRY478004, Use Code: 551.

A little history. Way back when, in the 1990s, “SKS,” an initialism for Snow King Special, was Polaris’ badge for its long track snowmobiles; an SKS was only one length, 136. The first SKS was the Indy 500. Followed by the 580 XLT (Xtra Lite Triple) SKS. As the 20th century gave way to the 21st century, SKS was swapped out for RMK, which remains today as “Rocky Mountain King.”

The SKS label remained, but was relegated as a label for Polaris’ deep-powder crossover line. As the Pro-Ride chassis came to be, the SKS designation disappeared. Then, from the ashes came SKS as the AXYS chassis rose to fame. In 2016, we at Snowmobile.com rode an SKS Pro, a 155 sweetheart with Series 6 track and a chaincase. It had idler wheels on the rear suspension rather than ice-scratchers. Simply, the 800 AXYS SKS Pro was a Pro-RMK 155 with chaincase and bogie wheels. This Pro, though an SKS, was 95% deep-powder and 5% crossover. 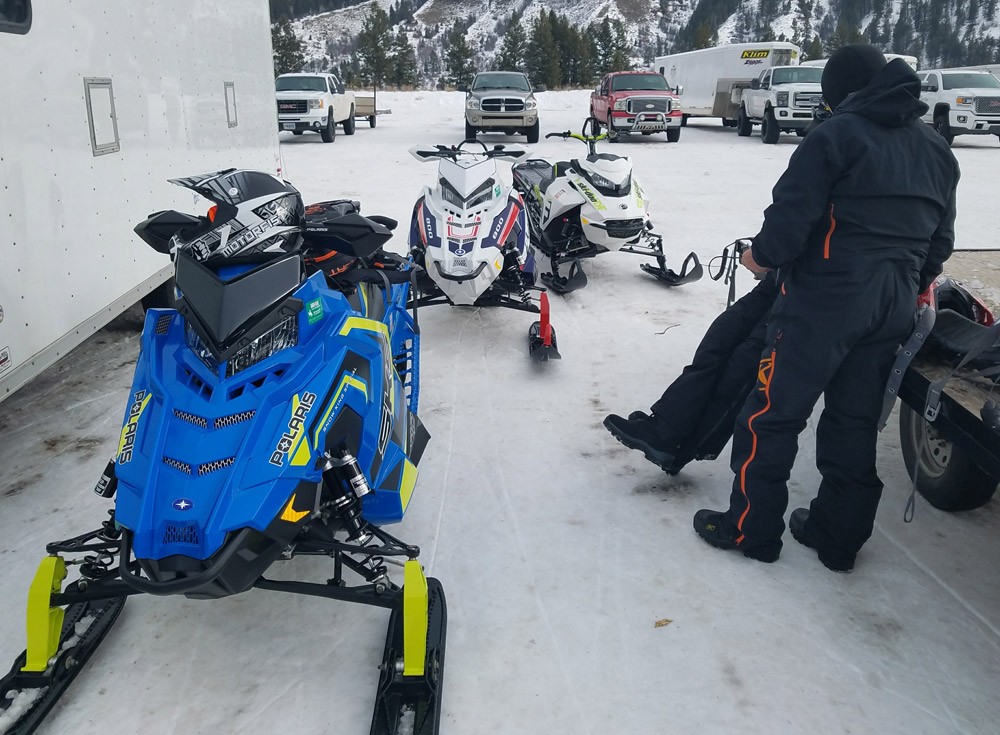 Proof we mix crossover snowmobiles,like the SKS 146, with our deep-powder mountain mashers. Special Use Permit; GRY478004.

Now, Polaris has another AXYS crossover snowmobile similar to the SKS 146, which is the Switchback Assault 144. Buyers can order this crossover with either a 1.35” Cobra, 1.6” Cobra, or RMK Series 4 2.0” (Spring-buy only). The Switchback Assault, like the 2018 Polaris SKS 146, tracks on an uncoupled IGX rear suspension. The SKS, though, is two inches longer (146 versus 144) and has tipped-up rear rails. The only track option for the 146 SKS is the 2.25-inch Peak, which is the Series 5 2.6-inch paddle track from the Pro-RMK molded to have 2.25-inch tall paddles. 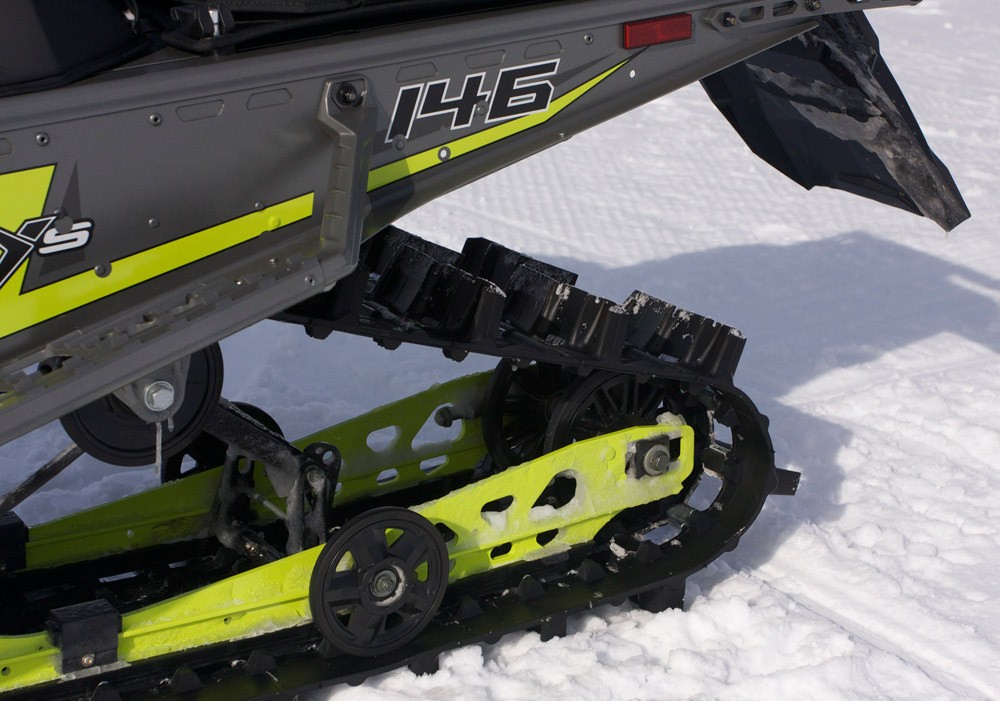 The 2018 SKS 146 spins a track with 2.25-inch lugs; it is called ‘Peak.’ This track is similar to Polaris’ Series 5 track with 2.6-inch paddles. This track performs well in powder conditions.

So, the SKS takes the crossover rider father off-trail, into deeper snow and onto steeper mountains; not Pro-RMK steep-and-deep, but steep-and-deep enough to make a grin stretch past the ear lobes. Speaking of grins, the smiles are miles-wide when boonie bonking and trail tapping.

In late December 2017 and early January 2018, we began pounding the trails and mountains on the 2018 Polaris SKS 146, mostly on the mountainsides near Alpine, Wyo. Snow levels were drastically low; we had to chase snow. On the first weekend in January 2018, as this author rode the Squaw Creek and Blind Bull region in the Bridger-Teton National Forest, I had to pick out scarce and sparse lines through the trees, deadfall and mudslides. In these less-than-adequate conditions, the SKS 146 proved itself a simple machine to maneuver, especially at slow speeds. Its short chassis with tipped up hyfax rails made negotiating around and between obstacles easy work. 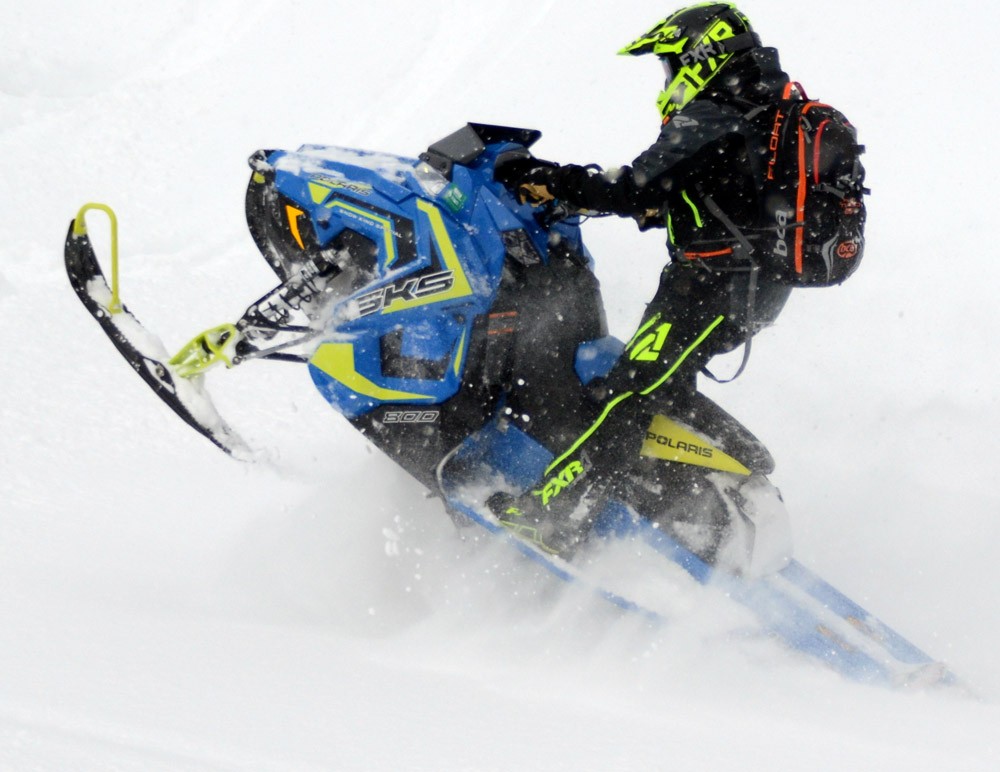 Braap it twice, open up the throttle bodies and let the SKS 146 be the giggly toy it is mean to be. For season 2018, the SKS 146 came to be the pocket rocket the Mountain Team played on the most. Special Use Permit; GRY478004.

On this first weekend in January 2018, when we found some fresh untracked powder near the Blind Bull warming hut, we threw the SKS 146 into the powdery world where its Pro-RMK brothers operates in. Now, we never expected the 146 SKS to be a powder hound like the 2018 Polaris 163 Pro-RMK we had at its side, but as a deep-powder crossover, it shamed many a hill. With some throttle pulses and several S-turns, the 2018 Polaris SKS 146 ascended every hill our 163 Pro-RMK climbed.

When riding a deep-powder crossover in fresh pow, like the SKS 146, ride the machine within its design capabilities. Such factors that limit a deep-powder crossover from being an all-out deep powder player are wider runningboards, a wider ski stance and a short track with paddles that are less than 2.5 inches tall. Understanding a crossover snowmobile has these, will assure you can ride it at its potential and beyond. Basically, work with the crossover chassis’ features, build on them, challenge them and your own riding abilities, and go have a fun time.

Our long-term 2018 Polaris SKS 146 evaluation model was a sled the Snowmobile.com Mountain Team became fond of. We found its short laydown steering post was not awkward to rotate when standing; we often discussed how natural the laydown post felt in our hands. We also believe if the post was taller than its 3.5 inches, it would have made deep-powder snorkeling more cumbersome than spot on.

Though the SKS has wide runningboards, the boards’ width did not create problems when sidehilling, such as pushing out the track when engaged on a slope steeper than 30-degrees. But, in the mountains near our home office, the snow’s depth was not a challenge.

Rolling the SKS 146 on its side took a bit more effort than a Pro-RMK 163, due to its low mounted jackshaft and wide ski stance, but once on edge, it was a cream puff to steer. Special Use Permit; GRY478004.

The factory set ski stance was perfect for trail riding, but we had to engage a few more arm and chest muscles to make quick rollovers. If you are a 146 SKS owner, and you want to ride more mountainsides than trail, we recommend setting the SKS’ stance to its narrowest, which is 39-inches; the SKS’s stance is an adjustable 39- 40- and 41-inches. The factory setting is 40.

The Walker Evans piggy back remote reservoir shocks on the front and rear suspension, were set at its “Firm” setting from the factory. We moved the three-setting dials to its middle setting, which was perfect for the rear, but still too stiff for the front.  Eventually, we set the front shocks to its softest setting, and too, reduced some coil over spring preload. This made the 2018 Polaris SKS 146 much more trail compliant (plush) while giving the front suspension proper flex when power loading one side or the other side on a sidehill cut.

The uncoupled IGX rear suspension performed very well in the backcountry. Though designed for trail and the boonies, the IGX lifted the nose when we launched the SKS; the IGX kept the chassis flat. The Mountain Team wrecking crew appreciated its flat stance when climbing. 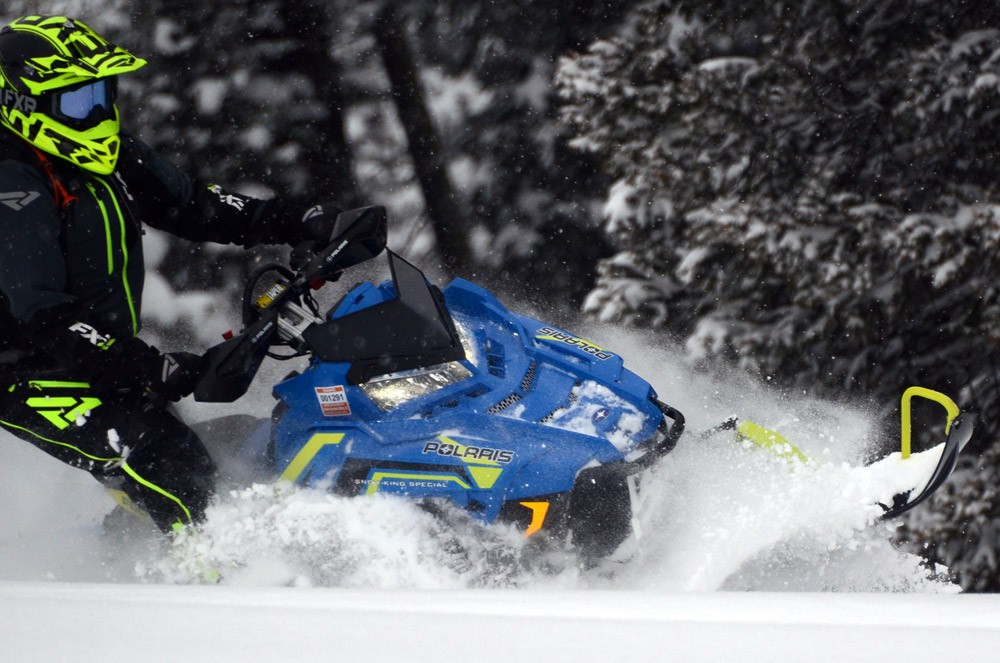 With its short post, the laydown steering on the SKS 146 did not throw drivers off balance. Its handlebar height, as well as the SKS’ driver forward position, made the SKS 146 easy to maneuver when standing. Special Use Permit; GRY478004.

The SKS’ crossover jackshaft sits in the tunnel, not above it like the Pro-RMK. The low mounted jackshaft allows the SKS operator to sit low and close to the motor which gives the SKS 146 pilot a “driver-forward” position.

Considering the aforementioned, the 2018 Polaris SKS 146 is locked down when trail burning and straightening the curves. We add too, the driver-forward position and low mounted jackshaft, in part, are two reasons why the SKS 146 works so well in the backcountry and on the trails.

When we first rode the SKS 146 last February and March 2017 (first reported May 02, 2017), we wondered what Polaris was thinking. After all, Polaris had in its lineup an AXYS crossover, the Switchback Assault 144. It did not take us long to learn, the SKS 146 was more than a crossover snowmobile, it showed that sometimes (perhaps more often than not), a deep-powder crossover is all a mountain snowmobile rider really needs; heavy on “needs.” What we want is a different topic altogether. 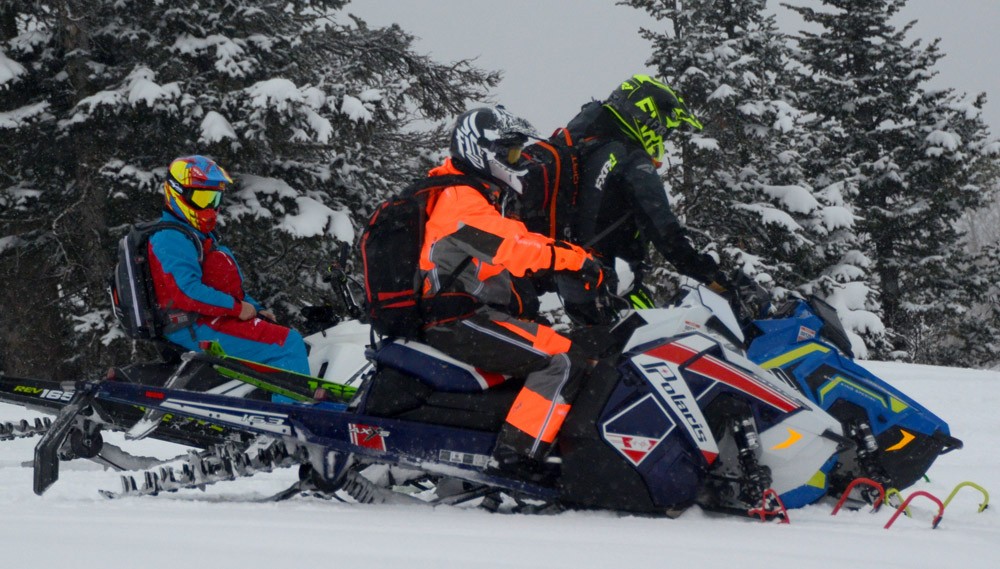 The SKS 146 battled the long tracks. Sr. Test Rider, Kevin Allred set the stage for our shootout by challenging the SKS 146, as shown as the middle snowmobile. Special Use Permit; GRY478004.

Lastly, the 2018 Polaris SKS 146 is playful, nimble and quick turning. It is an all-out blast to ride. Question is, would we as die hard mountain riders, give it consideration as our only mountain snowmobile for a season? We could and we would. We would put it into some precarious situations, perhaps frustrate it a bit, but we would make it pay the price, and the SKS 146 would be willing to throw down the bucks and nickels to be a mountain toy. Likewise, on the trails, and in the meadows and ravines, the SKS 146 is at home – and holy cow, is it a hoot to throttle. Why go to Disney Land or Six Flags when an SKS 146 is available? Right?

Here to close out this review of the 2018 Polaris SKS 146 are thoughts from Sr. Test Rider, Kevin Allred.

In the world of evaluating mountain snowmobiles, our bread and butter are the three inch long tracks. I wondered how this 2.25-inch SKS 146 would mix up with its deep snow siblings.

This SKS 146 is by no means an underdog snowmobile. I can’t believe how much power is freed up by not turning a big three inch long track; the power made a difference (track speed). The SKS 146 has superb handling. 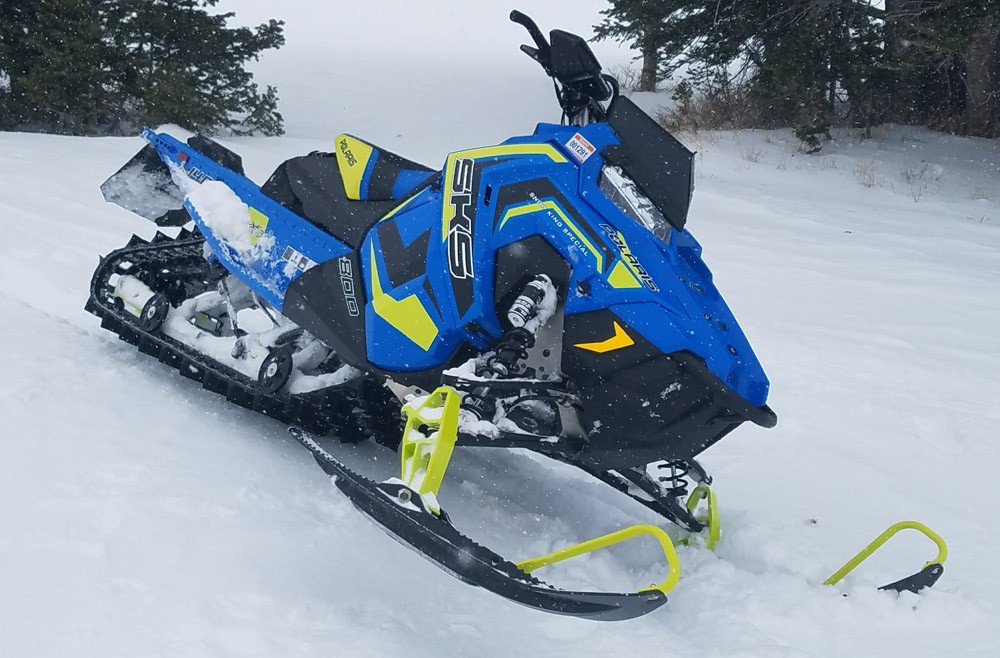 Polaris’ 2018 SKS 146 proved its metal on the slopes and trails near Alpine, WY. Note the snow on the runningboards and on the rear skidframe. We stuffed this 146 into some deep pow pow. Special Use Permit; GRY478004.

Usually the trail-style laydown steering throws me off, but not in the SKS’. I absolutely love the way this snowmobile handles and in turn, the way I can handle it. Yes, there were times I missed having a long and tall track, but with the SKS 146, I learned by keeping vehicle and track speed high, the 146er went pretty much wherever the long track snowmobiles motored to.  Again, the 146 SKS’ handling and power are incredible; the shock package’s ride-control attributed too much of this. I love the SKS’ colors and appearance.

Many mountain riders would be just fine on this type of snowmobile, but in the Western Rockies, it’s all about the long track machines (image, at times).