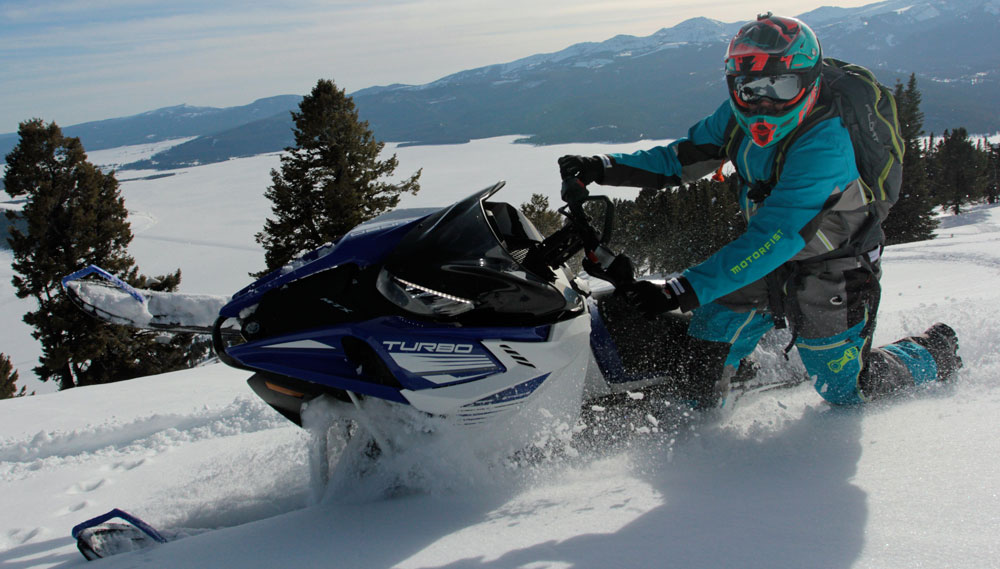 It’s a big gun mountain snowmobile. Yamaha has unleashed horsepower magic with a turbocharged 998cc three-banger four-stroke that eclipses its own boosted 1049cc Genesis motor with the MPI turbocharger.

By now you know the Sidewinder line from Yamaha is all new, as in new motor – a 998cc three-cylinder four-stroke with factory-designed and factory-installed turbocharger.

This big muscle sled was not a Yamaha and Arctic Cat venture where Yamaha handed Arctic Cat a steroid and amped-out motor and said, “Make it fit.” Nor was it the reverse where Arctic Cat handed Yamaha its ProClimb 162 chassis and said, “Make it fit.” Arctic Cat and Yamaha danced with each other all through the prom where one would lead, then the other, then back and forth until the dance closed with a fifty/fifty sharing. We’ll talk the Cat’s half when we write about the XF 9000 High Country and XF 9000 Cross Country; both stellar products.

The Sidewinder M-TX’s hood was designed as part of the turbo application. Just as important as the side-mounted turbo unit itself, the hood was designed to manage air flow and heat dissipation, as well as looking tough.

Regarding the boosted 998, Yamaha began this project three years ago. This motor was designed from inception to be what it is – a turbocharged behemoth. It is not a remade 1049cc triple Genesis, but a motor designed from the beginning to be a mountain monster snowmobile motor. We initially assumed the 998 in Yamaha’s new YXZ1000R side-by-side was the foundation to this boosted snowmobile motor. We were wrong. This boosted 998 Sidewinder snowmobile motor was the mother that gave birth to the YXZ1000R triple. When the YXZ’s motor began to take shape, the Yamaha engineers – snowmobile and YXZ – worked together. Now, because a boosted motor requires more quality assurance checks, it came out one year later than the 998 in the YXZ1000R.

To the point: Yamaha and Arctic Cat wanted it right. As in correct.

Just to bring you up to date; DynoTech Research, Batavia, New York, placed a pre-production 998 turbo on its dyno and the numbers that rolled off the dyno unit read 204 horses and approximately 125 foot pounds torque. The motor had 800 miles on it. Again, a pre-production motor.

Now, Yamaha holds to the 180 to 185 horsepower mark as the official talking point. We shall wait and see what a production motor throws down on an independent-dyno; regardless, impressive numbers from a pre-production.

For us mountain riders, we are passionate about mountain riding, and we understand the big question mark floating above your head: weight. 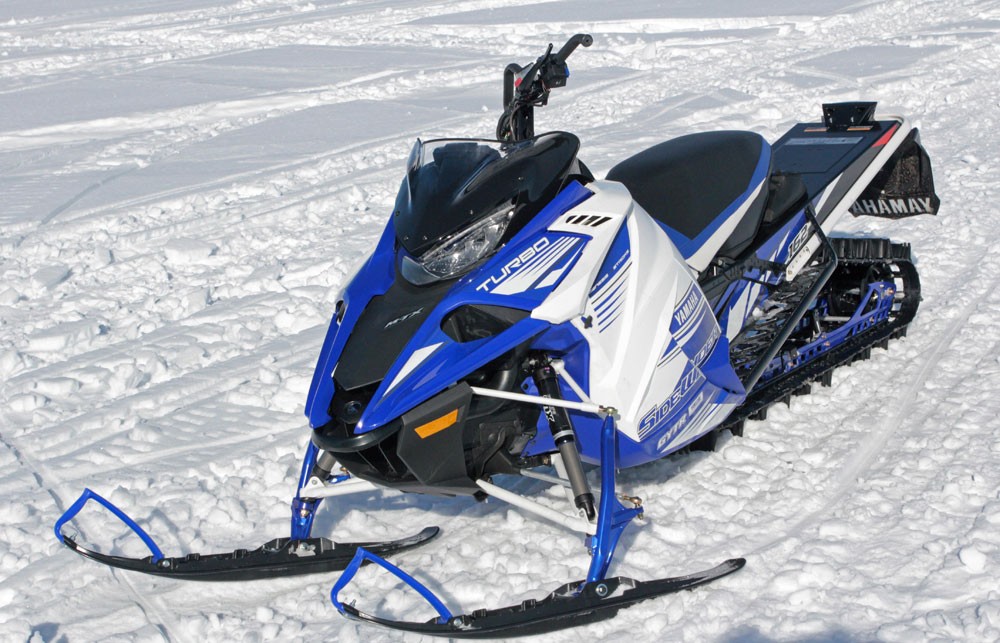 In the West, we are all weight weenies. You’d think all us westerners could fit into a pair of boot cut Wrangler jeans being the weight weenies we are, but not.

Before we take this on, the benefits turbocharged motors give are:

Yamaha reports the Sidewinder M-TX is about 44-pounds heavier than the Viper M-TX of same track length and lug height, a 162 with 3.0-inch PowerClaw. Be careful now, don’t turn up your nose. Remember this: 185 horsepower at 1,000 feet or 8,000 feet – power-to-weight is good, especially in high country. 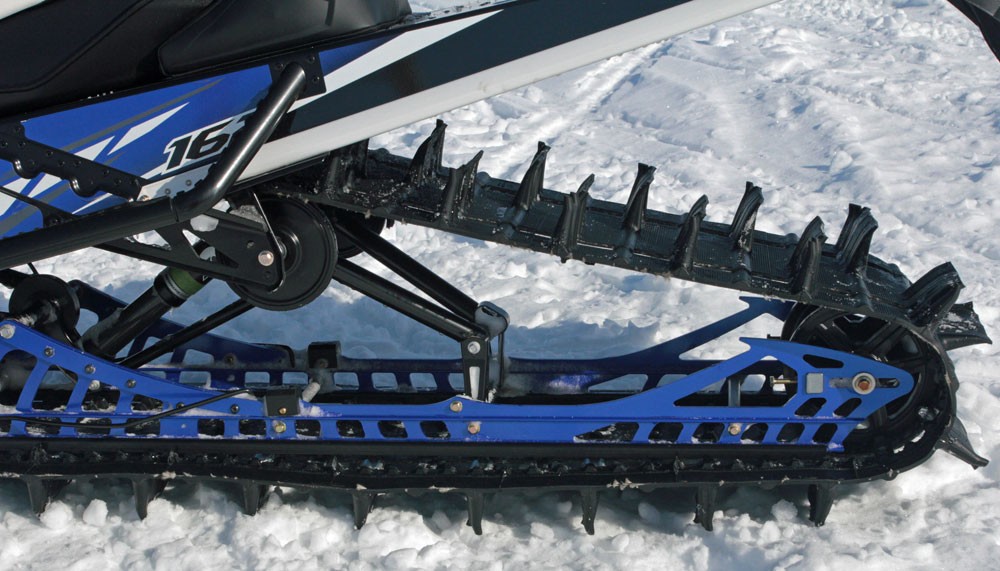 While the standard EFI-equipped non-turbocharged two-stroke and four-stroke motors lose horsepower as elevation increases, the Sidewinder M-TX hold its beefy horsepower close to its chest and does not let go.

Recap time. Several times each year we write about this-n-that and stuff-n-things, we remind our readers that a non-boosted motor, those without a supercharger (also known as a blower) or turbocharger, loses about three-percent to 3.5-percent of its horsepower per 1,000 feet in elevation gain. On hot dry days, this may be as high as four-percent.

Here is the beauty of Yamaha’s Sidewinder M-TX, it’s in its happy place all the time. It’s a Zen motor.

Another reality for y’all to ponder. Yamaha could have taken the route to go with this-and-that lighter engine material or chassis component. If it had done so, then it would face public backlash that the horsepower, torque and twisting forces were too much for the chassis, therefore, the chassis is junk. So, we side with Yamaha on this, make the snowmobile and its motor strong to withstand the punishing forces.

The turbocharged EFI four-stroke three-cylinder has a stout cast iron exhaust manifold and exhaust pipe, robust side-mounted turbocharger and turbocharger housing, intercooler, intake plenum, waste gate, and induction dump valve; that’s the way it is. Armed with this knowledge, you the customer, know, in short, what comes in this package. Yamaha’s snowmobile website has a plethora of knowledge.

Given all the above knowledge, for us in the Snowmobile.com mountain cave – and we hope for you to as well – we will not be “weight weenies.” We’ll just ride the Sidewinder M-TX 162. After all, why don’t you, I, and all of us lose 40 pounds? Why be critical of it, if it has to haul our fat rear ends around? Makes more sense; a strong and fit rider aboard a strong and fit factory-boosted mountain snowmobile.

If you don’t want the weight, but crave four-stroke EFI power, then migrate to the Viper M-TX. But we warn you, you’ll miss what you haven’t tried – a minimum (conservative) 180 to 185 horsepower.

Simply, the Sidewinder M-TX is, in journalistic spin, strong enough to stop the Earth’s rotation. 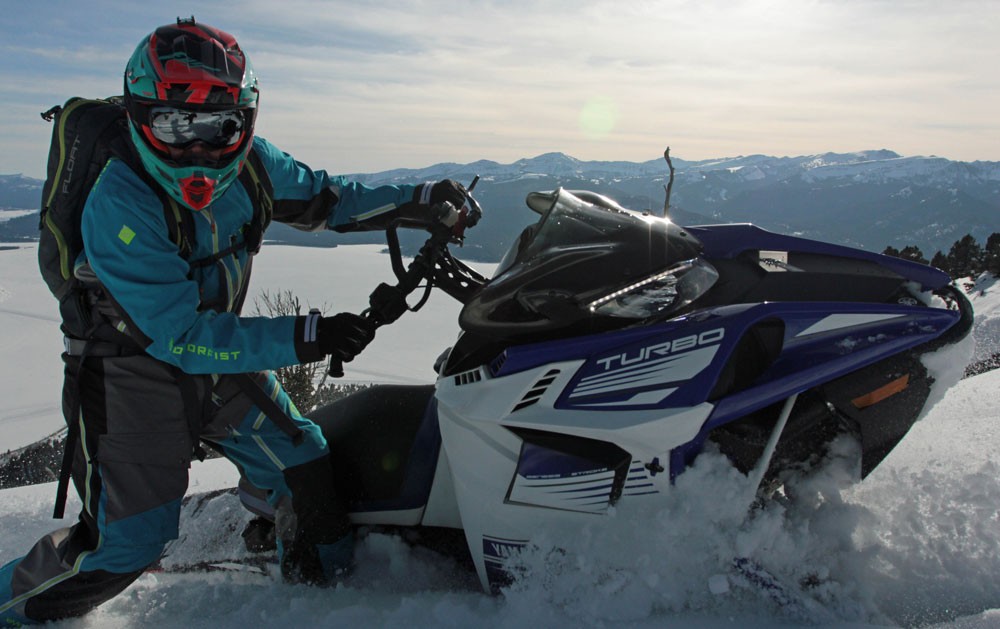 The Sidewinder M-TX SE wears one shoe size only: a 162-inch long by 15-inch wide track with three-inch lugs. This boosted M-TX is built on Arctic Cat’s ProClimb chassis, which Yamaha purchases from Arctic Cat, and Arctic Cat assembles the whole product to Yamaha’s quality control standards. And with that, Arctic Cat’s 9000 series line, which uses this same turbocharged motor, is also tied to the highest quality standards. The Sidewinder line from Yamaha has its own unique hood – it’s a nasty ferocious looking hood that is specifically designed to match inner-cooler function, induction, exhaust and to dissipate underhood heat.

Snowmobile.com Sr. Editor Jerry Bassett has written abundantly about the Sidewinder and its motor, giving much to motor-speak – the technical, and we encourage you to travel to his story links and learn more. Given that, here are our rider impressions.

Yamaha is oh-so-wise when calibrating the Fox Float 3 shocks. The SRV-M front suspension and the Dual Shock SR 162 rear suspension carry the chassis and its motor with remarkable smoothness, comfort and control. When slapping big frozen whoops, the chassis rarely bottoms-out, thus the impact energy was mostly, almost always, handled by the shocks.

The new Yamaha MTN ski is remarkable. This is a secret that Yamaha needs to boast. Its mountain ski floats the front end, and does all it can to assure the snowmobile doesn’t dive when in an off-camber cut down a mountainside. In our opinion, we believe Arctic Cat should purchase this ski from Yamaha and use it on its chassis. 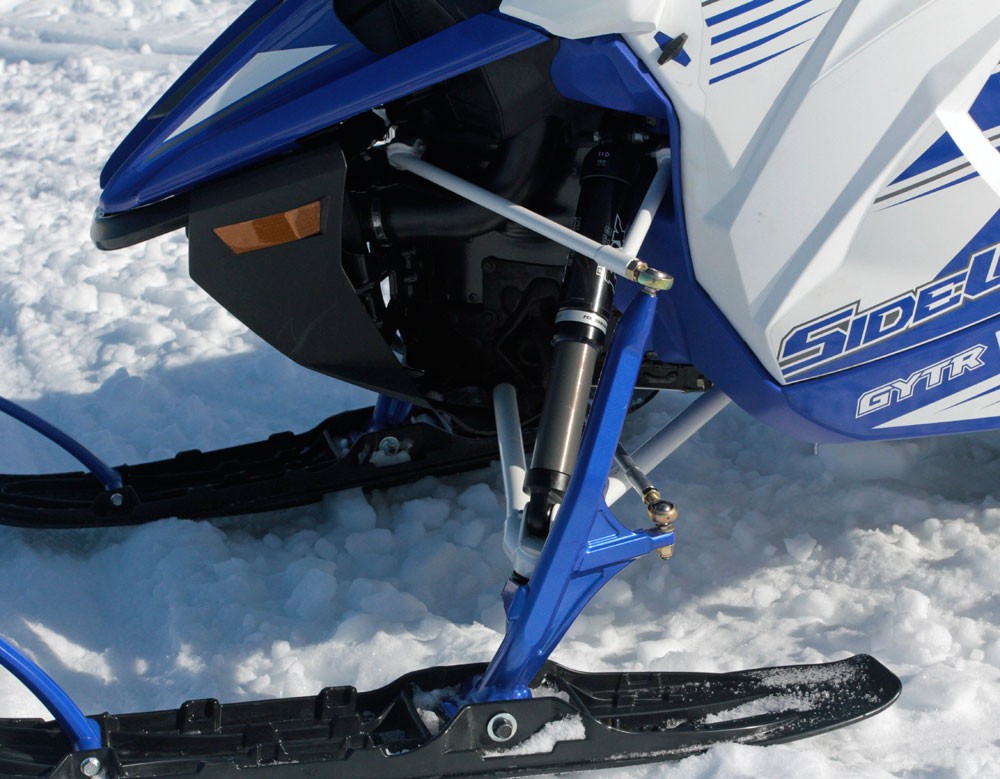 The cinched-in front end, the SRV-M front and the excellent all-new MTN powder ski is a reliable and dependable combination. The Fox Float 3 shocks assure good trail and powder contact.

The motor is quiet. In fact, we believe, quieter than the 1049 Genesis. Now, this quiet motor is furious about taking on its rivals the “steep” and the “deep.” The Sidewinder M-TX plays well in deep snow – the deeper the better. However, if challenging a sidehill on hero snow – hardpacked crusty Spring-like snow – then rolling it up its side is a challenge. That is where its weight handicaps it. But it can be done. This is meant to be a deep-powder masher. If in arm pit-deep snow, and when stuck, be patient and wait for a friend to help. That’s just the way it is when playing with over 180 to 185 horsepower (and probably more).

In trees, the 998 turbo lumbers along quite well. It is not a motor with lag. While tight-tree boondocking, the motor is as gentle at low RPM as Yamaha’s 1049 Genesis. As the Sidewinder M-TX pokes out from the trees, though, and stares up at a mountain, then with a hard throttle slap, the motor rolls out its 180-plus horsepower and tears it up.

This brings us to the fine Yamaha clutches. Yamaha developed a new YSRC roller secondary system to deliver aggressive upshift and rapid backshift to minimize lag. Yamaha also upsized its new secondary clutch to overshift, allowing the Sidewinder M-TX 162 SE to stretch out its legs when blowing through a long straight away. How smooth are these clutches with the boosted motor? It is as smooth as a Marine rifleman slipping a new round into his sniper rifle and squeezing off a shot. Boom.

Can you set up a wrong foot forward downhill sidehill turn? Yes. Yamaha spent almost three years working with Arctic Cat to assure the ProClimb chassis is robust, while being nimble at “mountaineering.”

A few amenities the Sidewinder M-TX has. An optional heated seat; this may not seem much to a mountain rider, but at night, on the long trail ride home – yes, it is nice. It has a contoured mountain seat to minimize the chances of snaring a leg on hop-overs. It comes with a vertical steering post and push button reverse.

In closing. The Yamaha Sidewinder M-TX 162 is a user-friendly mountain snowmobile. Yes, it is heavy. We can’t hide that fact. But the Sidewinder M-TX handles itself with an airy touch when in deep powder. Its motor is quiet and chomps mountains down to size. It is built to withstand harsh abuse, and we can’t stress that enough. Lastly, its power-to-weight allows it to delve into its fascination at conquering mountainsides.

Would we ride one? Yes. We already have and we will be doing it again.